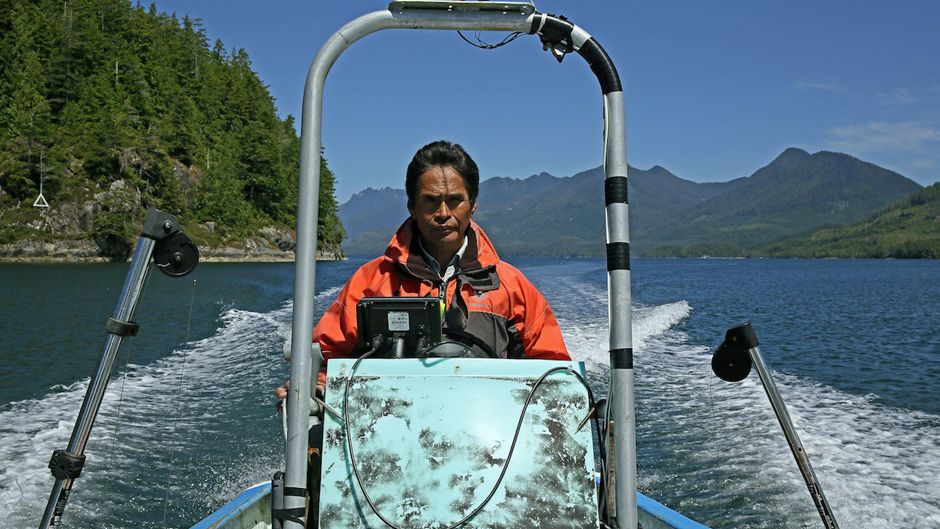 An unrivaled guide to the Clayoquot Sound, Joe Martin often takes visitors around the Ha’huulthii, the traditional territory of Tla-o-qui-aht people, and generously shares his deep knowledge of the lore of the land, sea, and traditions of the original peoples of the Clayoquot Sound — the wolves, orcas, salmon, trees, Tla-o-qui-aht, and others. Photo: © Gleb Raygorodetsky.

In previous chapters of this eight-part series, Adjunct Research Fellow Gleb Raygorodetsky of the United Nations University Traditional Knowledge Initiative sets about visiting the traditional territory of the Tla-o-qui-aht — widely known as Clayoquot Sound, British Columbia — to understand the challenges and triumphs their people have faced. In today’s instalment we find out how the territory’s incredibly vibrant web has supported the Tla-o-qui-aht over the centuries and how whaling, in particular, was not just a matter of subsistence, but it was a culturally and spiritually significant activity.

Joe rummages through stacks of old papers on the shelf and pulls out a faded archival photograph. Wrapped in traditional bearskin blanket, a Nuu-chah-nulth whaler stands on the beach. A pair of sealskin bladders is hoisted on his shoulders, tethered with a coiled leather thong to the whaling harpoon he is holding in his other hand. “In the old days, our people mostly preferred to hunt for humpback whales,” Joe says with a hint of nostalgia in his voice. “But there were other whales that were taken as well, like the finback, which is the second largest whale in the world, and the right whale, which used to be here. The gray whale, the minke whale, and the sperm whale were also taken. Large whaling canoes were used to go after them.”

I follow Joe out of the house and we walk to the opposite side of the beach. Countless mussel shells, crusted-over with sea salt and bleached by the sun, crunch under my feet. Joe stops at an opening to a wide channel leading through the rocks from the beach all the way to the open water. Large boulders piled up high on both sides signify the hard work Joe’s ancestors put into making it easier to beach harpooned whales centuries ago. The whales were butchered right on the shore, and the meat was cut up, smoke-dried for the winter, and the blubber rendered into oil. Many whalebones were left behind in ever-growing heaps. Joe points toward a grass-covered knoll about 15 feet tall and 150 feet long at the edge of the forest. 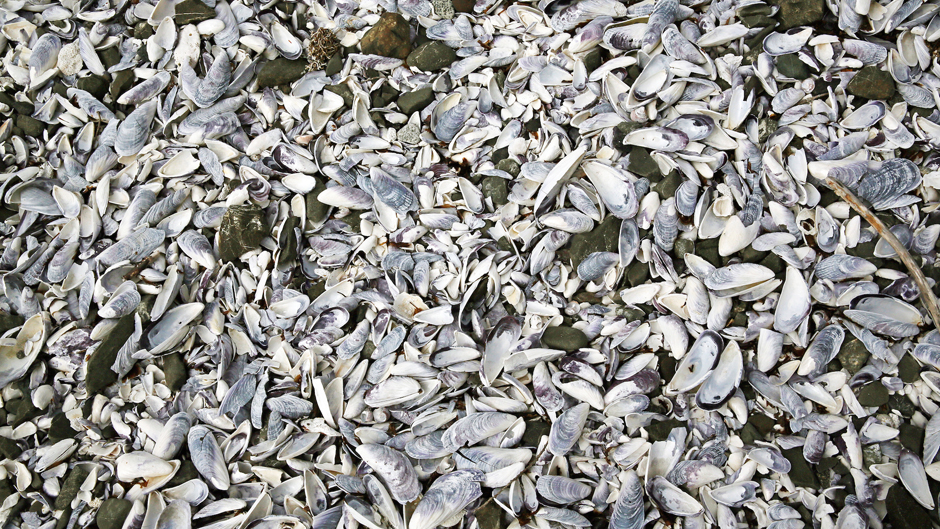 Countless mussel shells, crusted-over with sea salt and bleached by the sun, crunch under my feet. Photo: © Gleb Raygorodetsky.

“This is one of the spots where the bones were left,” he says. “In fact there’s this fella I’m supposed to meet here in the next few days — Dr. Jim Darling. He’s a whale biologist living here in Tofino. We’re supposed to make a plan about where to begin digging for whalebones. Basically, the wants to be able to tell what kind of whale, how long ago it was, and also to see perhaps even what kind of a diet that whale had. For us, the general idea is to interest our own youth, so that they learn about our traditional territory and our way of life. Especially, about the history of whaling, which used to be so important to our people, but had to be abandoned because of what commercial whaling did to the whales.”

Commercial whaling came to the Pacific Northwest in mid-1800s, and, in less than a century, unleashed the same devastation on the migratory populations of whales that the fur trade had inflicted upon the fur bearers a few decades earlier. Between 1905 and 1967, when commercial whaling was finally banned, whaling stations along the west coast of Vancouver Island alone, killed and processed a total of over 24,800 fin, sperm, gray, humpback, and blue whales. The collapse in numbers of whales passing through Tla-o-qui-aht traditional territory during the first half of the 20th century, made it increasingly difficult for Tla-o-qui-aht people to continue their annual subsistence cycle. As the whaling on Echachist came to an end, the island ceased to be a seasonal hub for Tla-o-qui-aht hunting and fishing. Joe’s house is the only permanent Tla-o-qui-aht dwelling remaining.

Tla-o-qui-aht whaling technology was not primitive, but quite lethal. A thirty to forty-foot ocean-going whaling canoe made of a single cedar log and manned by an eight-person crew allowed for quick pursuit of the migrating giants. The whaling crew consisted of six paddlers sitting side by side, a steersman in the back, and the harpooner in the front of the boat. The harpooner captained the canoe, directing the hunt based on his knowledge of whale behavior and his ability to read the subtle signs to predict its movements. In the hands of a master harpooner, an eighteen-foot long spear — its head hewn out of two interlocking pieces of hard yew and tipped with a sharp mussel shell glued into the shaft with rock-solid spruce sap — presented a formidable weapon capable of making a significant dent in the numbers of whales migrating past Echachist. Still, despite this advanced technology, the Tla-o-qui-aht people managed to harvest whales for centuries without diminishing their numbers.

Each Tla-o-qui-aht house, or clan, followed a set of traditional, time-tested rules governing their relationship with the entire Ha’huulthii, their traditional territory, including how many whales they could take during the annual whale hunt. “I come from the house of Eewas, which means a ‘wide land’,” Joe states proudly. We were allowed to take ten whales every year.”

Joe looks at me to see my reaction. With close to ten thousand Tla-o-qui-aht people living around the Clayoquot Sound at the time, I can imagine the whale harvest to be quite high. “Still,” Joe pauses here to emphasize the point, “They would never kill more than what they needed to provide for themselves, and, every year, they had whales to hunt. One of our teachings is that Mother Nature will provide for our needs, but not our greed. And it’s the greed that’s overriding a lot of things nowadays.” 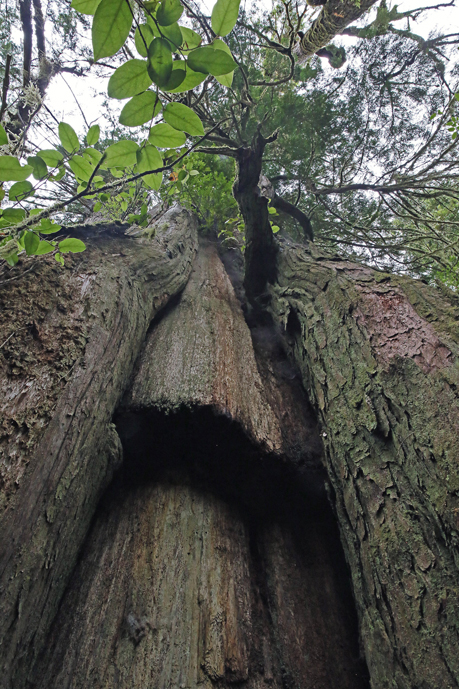 The ancient temperate rainforests bear tree scars left by Tla-o-qui-aht ancestors who peeled off the bark for their baskets, and carved out boards, for canoes and long houses, harvesting the trees without killing them. Today, such ancients are known as Culturally Modified Trees, or CMTs. Photo: © Gleb Raygorodetsky.

We continue for a few minutes along the beach, climbing over rocks to the edge of an open grotto the size of a small swimming pool. The tide is beginning to come in, but there is still enough room for the waves to take a quick run across the cavern and slam with a timpani-like BOOM! against the underside of a low ledge. For Tla-o-qui-aht, as for other Nuu-chah-nulth tribes, whaling was not just a matter of subsistence, but it was a culturally and spiritually significant activity.

“Our whale hunters would come here to dive and prepare themselves for the hunt,” says Joe, his bronzed hand reaching toward the pool. “With the waves moving in and out like this, it kept them in practice so that they would never, ever be afraid of the water. They would come here and do this ritual the night before the hunt or early the morning, just before leaving.” We stand by the pool for a few minutes, listening to the pulse of the Clayoquot.

“Well, the fog’s lifting,” Joe finally says, pulling himself away from this window into his people’s past. “Now’s a good time to visit Meares Island — it will be a nice ride.”

As the last wisps of fog dissipate, Clayoquot Sound around us bursts forth in brilliant hues — the deep malachite of forests, the almost translucent whalebone of the distant mountain peaks with puffy clouds floating above the deep sapphire of the ocean and the Sound. Called Wah-nah-jus Hilth-hoo-iss in Nuu-chah-nulth, Meares Island is the place where Tla-o-qui-aht people would traditionally spend their winters hunting, socializing, and holding important coming-of-age ceremonies, like the rites of passage into the wolf clan.

The ancient temperate rainforests covering Meares Island bear witness to long-time human presence, like the tree scars left by Tla-o-qui-aht ancestors who peeled off the bark for their baskets, and carved out boards, for canoes and long houses, harvesting the trees without killing them. Over centuries, these scars healed, leaving a permanent record of people’s past use of the area. Today, such ancients are known as Culturally Modified Trees, or CMTs. The markings in other parts of Clayoquot Sound rainforests are more recent, and much less benign — they are the scabs of clear-cuts left by the logging industry during recent decades, still healing on the mountain slopes and valleys around Clayoquot.

These wounds would be much more extensive and threatening to life here, had it not been for the unwavering resolve of the Tla-o-qui-aht people who took a firm stand against the logging industry in 1980s and again in 1993, during one of the largest, peaceful, civil protests in Canada’s history against clear-cutting of old growth forests.