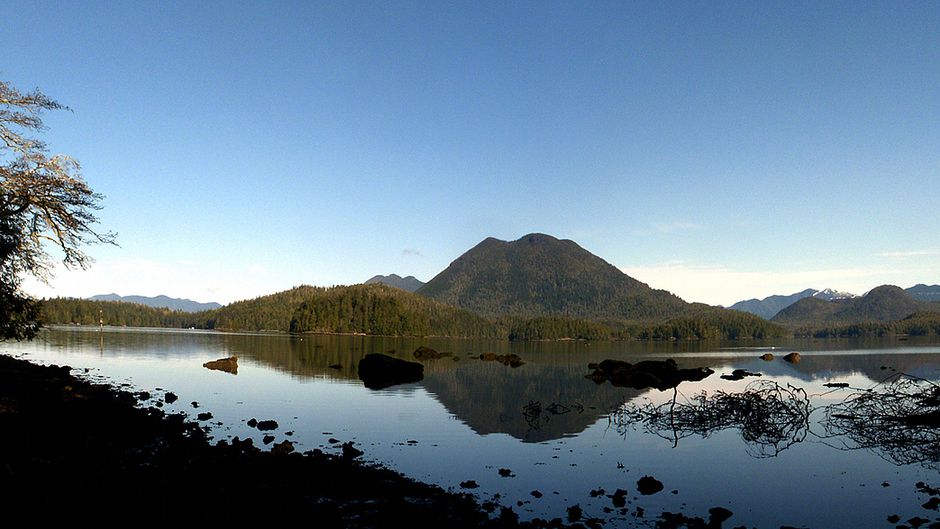 In previous chapters of this eight-part series, Adjunct Research Fellow Gleb Raygorodetsky of the United Nations University Traditional Knowledge Initiative sets about visiting the traditional territory of the Tla-o-qui-aht — widely known as Clayoquot Sound, British Columbia — to understand the challenges and triumphs their people have faced. In this instalment, Raygorodetsky visits Meares Island with the kind guidance of Tribal Parks Guardians and gets a glimpse at the millennia-old relationship between local people and the massive western red cedar old-growth forest.

A couple of days before my trip with Joe, I had arranged to pay my respects to the forest elders — the ancient trees of the Meares Island Tribal Park. I also wanted to visit with Cory Charlie, a Tribal Parks Guardian, and his crew of summer assistants, as they made repairs on the Big Tree Trail. The trail was built in the 1980s following the Meares Island forestry dispute to help the visitors and the press experience the true magnificence of the old-growth forest.

From the landing at the head of the trail on the south side of the Island, the elevated boardwalk meanders in a big loop among some of the most ancient living beings on Earth. It wraps around the giant hemlocks, red cedars, and spruce trees, leaps over knotted tree roots, skips down some steps to a placid creek, and climbs back up again. The walk is fairly short, half-an-hour at a leisurely pace, but almost every tourist who travels here from Tofino by water-taxi, kayak, or Tla-o-qui-aht traditional canoe, spends at least twice as long, deeply touched by the encounters with the ancient woods. Every plant here has its story to tell and gifts to share. Over generations, the Tla-o-qui-aht people have learned how to listen respectfully to their voices and gratefully accept their offerings. 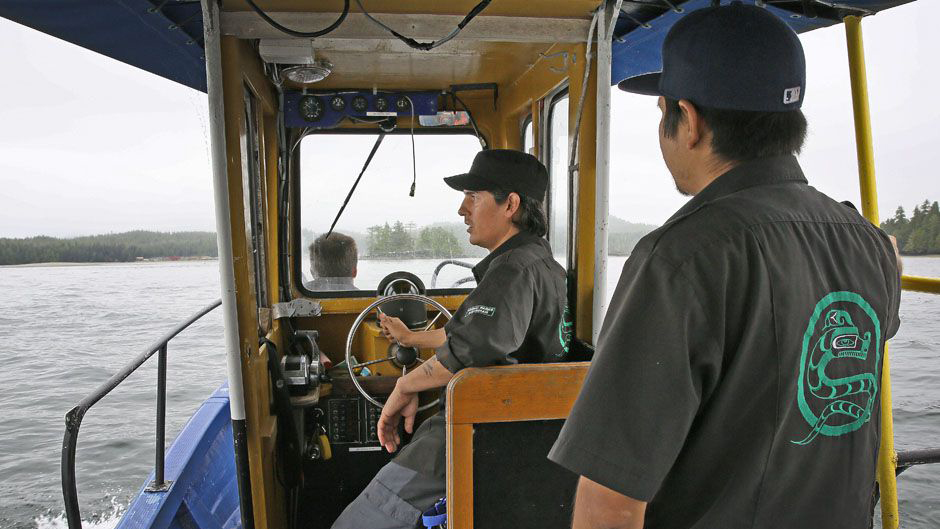 If the visitors come to the Big Tree Trail with a Tla-o-qui-aht guide, they might be able to steal a glimpse at a millennia-old relationship between local people and plants. They would learn that the Tla-o-qui-aht people consider the massive western red cedar — some reaching 60 feet in circumference and 180 feet in height — to be the Tree of Life because it bestows a multitude of gifts: canoes, totem poles, longhouses, bentwood boxes, paddles, cradles, ropes, baskets, and even clothes. The sap of Sitka spruce is the best fire starter, earning it the name of a Fire Tree.

All kind of berries — salmonberries, huckleberries, thimbleberries, salal berries, strawberries, and blackberries — abound in the forest and are used for food and medicine. Deer fern fiddleheads are prized as a springtime delicacy, while many of the over 800 species of lichens growing here are an important source of traditional medicine. For the adept, the rainforest is a shelter, a garden, a pantry, a work shed, a medicine cabinet, and a cathedral all wrapped into one. 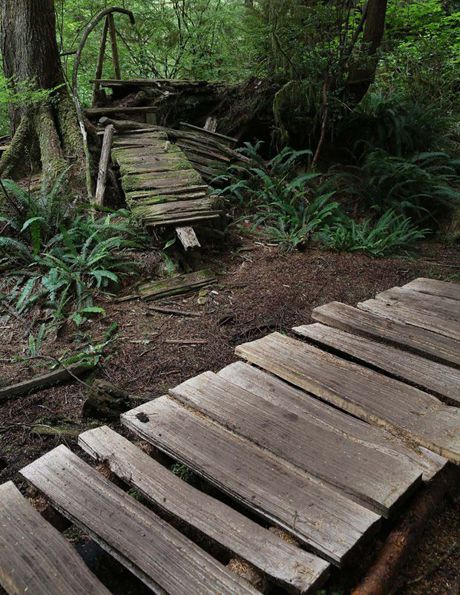 After sitting on the damp ground for three decades, the original planks and beams of the elevated boardwalk need to be replaced in many places along the trail. Photo: © Gleb Raygorodetsky.

Cory Charlie and two of his assistants — all recognizable by a green Tla-o-qui-aht Sea Serpent coiled inside a large green hoop emblazoned on the back of their black Tribal Park uniforms — are splitting a western red cedar blowdown into planks and carrying them to the sections of the trail in need of repair. After sitting on the damp ground for three decades, the original planks and beams of the elevated boardwalk need to be replaced in many places along the trail. It is backbreaking and tedious work; especially with the inadequate tools they have at their disposal. But it has to be done, and they persevere.

“It never ends with our old trail,” Cory says. “We want to replace the whole lot, maybe three hundred meters of boardwalk or so. It’s quite a job, I tell you. In the rest of the park we’re gonna open forest floor trails, more of the bush-whacking kind. We just don’t have the resources to build boardwalks everywhere we want to. Although that would be the best thing to my mind.”

When, yet again, the chainsaw breaks, Cory has to call it a day. He picks up a few other tools to take back to Tofino for repairs, stuffs them into his worn and faded backpack, and sits down on the half-cut log for a smoke. In the dampness of the rainforest, the sharp and sweet aroma of red cedar sawdust makes me think of hot sauna, roof shingles baking in the sun, and freshly grilled cedar-planked salmon, all the smells evocative of the gifts of comfort, nourishment, and life that this tree brings to people.

“I was quite transient growing up,” reminisces Cory. “My dad was raised here, lived here, and then moved away, taking me and my older brothers along, first to Vancouver then to few other places. When I was sixteen-seventeen, he asked me to come back and live up here. I wasn’t living with him at the time and was into more bad things in the city than good things. So I moved home. I thought that it was a great trade for me, ‘cause I got the forest and the ocean and everything. I kinda knew right away. I was like, ‘Wow, this is it!’ I stayed, got my Wilderness Certificate so that I could get jobs in the tourism industry. 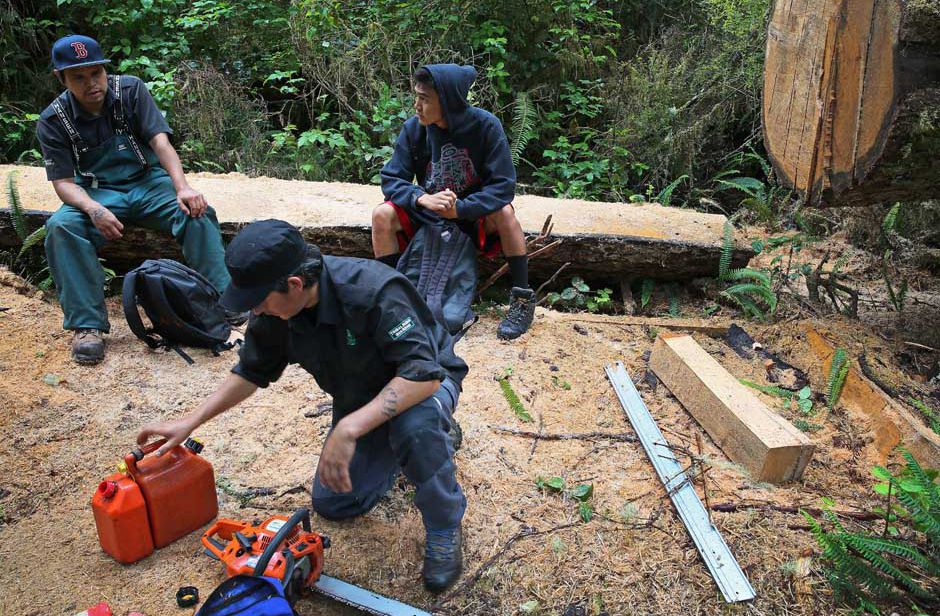 In the midst of cutting supporting beams from a blowdown, the chainsaw breaks and Cory must take it back to Tofino for repairs. Photo: © Gleb Raygorodetsky.

“Then I started working as a guide on a new Zip-line that got going on our territory. When the Tribal Parks job came up, I was right there. This is the best job! But like I said, it’s hard with funding and I might have to take some time off this winter and go to Victoria to take some courses at the University there. I want to learn about green design. Like when we think about the future of our Tribal Parks and what we need to do, I truly believe we need to be thinking carefully about what we build.”

The four full time staff at the Tribal Parks, Cory explains, just don’t have the time to keep up with everything that needs to be done. In addition to the original Meares Island Tribal Park created by Tla-o-qui-aht in 1984, the Ha’uukmin (Kennedy Lake) Tribal Park was created in 2009, and two new parks — Tranquil Creek and Esowista — were designated in 2013. The four cover most of Tla-o-qui-aht traditional territory and over half of the Clayoquot Sound, and their upkeep is an impossible task to look after with so few staff and almost no funds to run the office. Even getting a sense for how many visitors come to the Big Tree Trail each year is a lot of guesswork. Based on his experience over the last couple of years, however, Cory estimates that about five thousand tourists walk the Big Tree Trail boardwalk between June and August — peak tourist season. 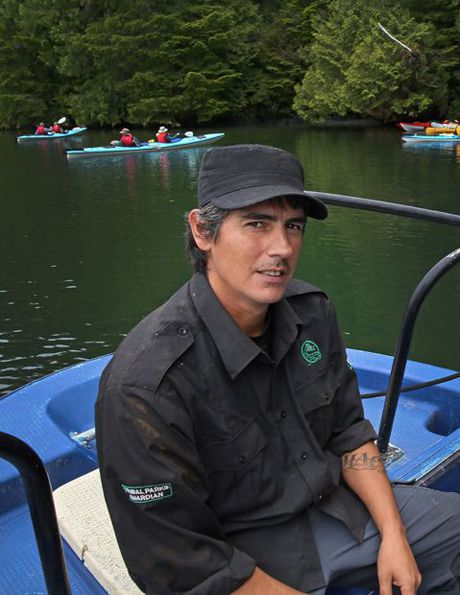 “The Tribal Parks job is the best job!” says Cory Charlie. He isn’t just fixing an old trail, but rebuilding a path for his people to continue looking after their land, as well as for outsiders to learn to love and care for it. Photo: © Gleb Raygorodetsky.

We carry the failed equipment back to a moored Tribal Parks boat, an old fiberglass dinghy with a roof and a glass bottom, now half-overgrown with algae, donated to the Tribal Parks. On our way there, Cory reflects that it might take a couple of days to fix the chainsaw, and so he has to shift his schedule and refocus his crew’s attention on other activities in the Parks, like finishing cutting the new trail to the top of Lone Cone Mountain. Lightly built, but tough-looking, Cory emanates the poise and confidence that comes from knowing who you are, where you are from, and where you are going. He doesn’t seem discouraged by the events of the day, his work in general, or the predicament of his people, instead taking it all in stride.

Patiently waiting for his assistants to load up their gear in the boat, Cory pulls on the cigarette and squints as the smoke drifts up his graying mustache stubble and melts into long pepper and salt hair sticking out from under his black cadet cap. Cory’s eyes twinkle with warmth, and the way he talks to me and chats with a couple of tourists who pass us on the trail is easygoing and welcoming. He isn’t just fixing an old trail, he is rebuilding a path for his people to continue looking after their land, as well as for outsiders to learn to love and care for it. As Eli Enns, the Tribal Parks Co-Director, later explains to me, this is precisely the connection the Tribal Parks are meant to nourish.