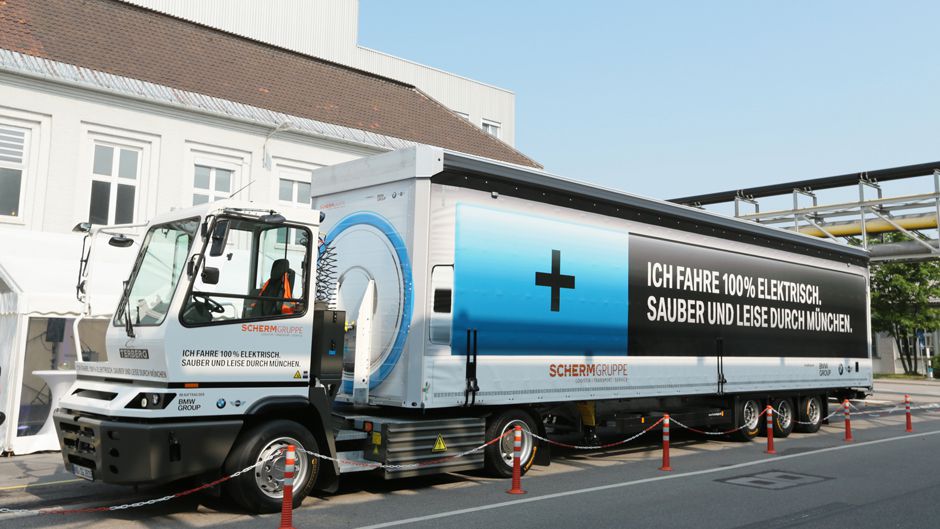 On Tuesday, an all-electric tractor-trailer hit the road in Munich, Germany — the first time such a large electric vehicle made by a European manufacturer has gone into regular service in Europe, according to BMW, the company behind the project.

The 40-ton truck has a range of about 62 miles per charge, which takes three or four hours. Its first deployment will entail transporting vehicle components — such as shock absorbers, springs and steering systems — over stretches of less than two miles across Munich seven times a day.

Developed by BMW Group and the SCHERM group, a German automotive service provider, the big rig is a model from the Dutch manufacturer Terberg. According to the companies, the truck is “CO2-free, quiet and generates almost no fine particle pollution.” They also state that compared to a standard diesel engine truck, the electric truck will save 11.8 tons of carbon dioxide per year — the equivalent of the emissions produced by driving one of BMW’s more efficient cars, which gets an average of 60 miles per gallon, around the world almost three times.

The electric truck is quiet, generates almost no fine particle pollution and will save 11.8 tons of carbon dioxide per year, says BMW.

Trucks are notoriously inefficient, with the Environmental Protection Agency (EPA) calculating that medium- and heavy-duty vehicles account for about one-fifth of greenhouse gas emissions and oil use in the US transportation sector, but only make up about 5 percent of vehicles on the road. In June, the EPA and the Department of Transportation joined forces with a proposal to turn this trend around and reduce carbon dioxide emissions from heavy duty trucks by about one billion metric tons for vehicles made between 2021 and 2027.

According to the EPA, oil consumption and greenhouse emissions from heavy-duty vehicles are expected to surpass that of passenger vehicles at the global scale by 2030. In a category that includes not only tractor-trailers, but also garbage trucks, school buses, big personal vehicles like Ford F-350s, and vans, BMW’s new electric truck could pave the way for critical industry innovation needed to curtail air and climate pollution.

“With this project we will gain valuable information on what will be possible with electric trucks in the future for city logistics,” said Jürgen Maidl, head of logistics at BMW Group, in a statement.

According to the European Commission, transportation is the only major sector in the EU in which greenhouse gases are still rising — and they are 20.5 percent higher than they were in 1990. Heavy-duty vehicles are responsible for about a quarter of CO2 emissions from EU road transport and about 6 percent of total EU emissions.

While all-electric vehicles would be the ideal, there are many stops along the way to improving efficiency and design that can have a big impact on greenhouse gas emissions as well as costs. With big trucks often only getting 5 or 6 miles to the gallon, the EPA estimates its proposed standards would cut fuel costs for the vehicles in question by about $170 billion.

If all 18-wheelers in the US were as efficient as the US Department of Energy’s SuperTruck initiative the country would consume nearly 300 million fewer barrels of oil and spend nearly $30 billion less on fuel each year.

The Obama Administration also had a SuperTruck initiative run through the Department of Energy (DOE) that aimed to develop tractor-trailers that are 50 percent more efficient than baseline models by this year — a goal it surpassed in April. If all Class 8 trucks, or 18-wheelers, in the US were that efficient, the country would consume nearly 300 million fewer barrels of oil and spend nearly $30 billion less on fuel each year, according to the DOE.

Last year Walmart unveiled one example of how large trucks can become more sustainable by releasing a tractor-trailer that will be 20 percent more aerodynamic than the current fleet and will use a “micro-turbine hybrid powertrain” than can run on diesel, natural gas, biodiesel and “probably other fuels still to be developed.” Dubbed the WAVE (Walmart Advanced Vehicle Experience), the trailer is made out of carbon fibre, which reduces the weight of the big rig by 4,000 pounds per vehicle.

If the changes were able to bring the truck above 10 mpg from its average of around 6 mpg, cost savings could add up to $25,000 or more per 120,000 miles, depending on diesel prices, according to Gas2.org.