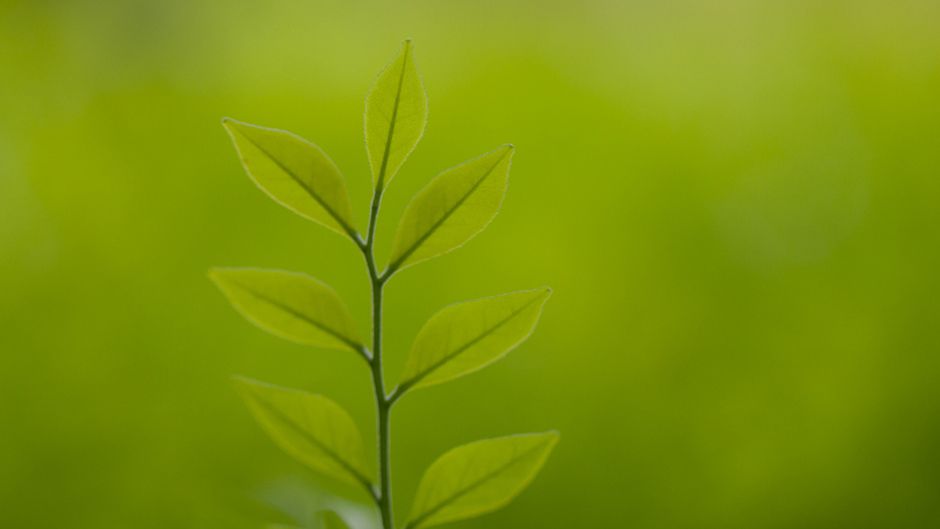 As production (real GDP) grows, its marginal utility declines, because we satisfy our most important needs first. Likewise, the marginal disutilitiy inflicted by growth increases, because as the economy expands into the ecosphere we sacrifice our least important ecological services first (to the extent we know them). These rising costs and declining benefits of growth at the margin are depicted in the diagram below. 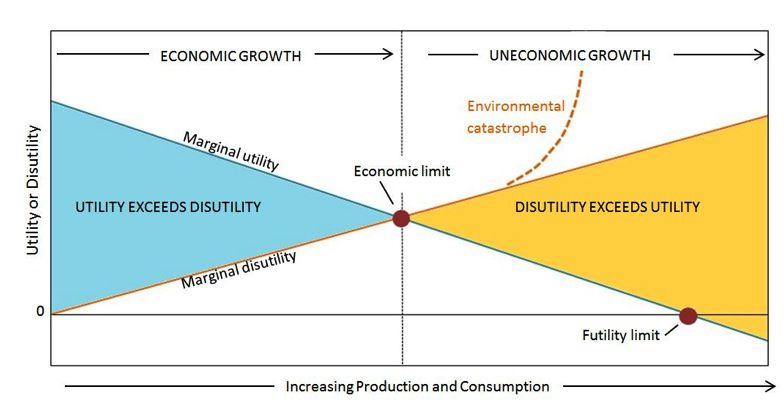 From the diagram we can distinguish three concepts of limits to growth.

Economists will note that the logic just employed is familiar in microeconomics — marginal cost equal to marginal benefit defines the optimal size of a microeconomic unit, be it a firm or household. That logic is not usually applied to the macro-economy, however, because the latter is thought to be the Whole rather than a Part. When a Part expands into the finite Whole, it imposes an opportunity cost on other Parts that must shrink to make room for it. When the Whole itself expands, it is thought to impose no opportunity cost because it displaces nothing, presumably expanding into the void. But the macro-economy is not the Whole. It too is a Part, a part of the larger natural economy, the ecosphere, and its growth does inflict opportunity costs on the finite Whole that must be counted. Ignoring this fact leads many economists to believe that growth in GDP could never be uneconomic.

Standard economists might accept this diagram as a static picture, but argue that in a dynamic world technology will shift the marginal benefit curve upward and the marginal cost curve downward, moving their intersection (economic limit) ever to the right, so that continual growth remains both desirable and possible. However, the macroeconomic curve-shifters need to remember three things. First, the physically growing macro-economy is still limited by its displacement of the finite ecosphere, and by the entropic nature of its maintenance throughput. Second, the timing of new technology is uncertain. The expected technology may not be invented or come on line until after we have passed the economic limit. Do we then endure uneconomic growth while waiting and hoping for the curves to shift? Third, let us remember that the curves can also shift in the wrong directions, moving the economic limit back to the left. Did the technological advances of tetraethyl lead and chlorofluorocarbons shift the cost curve down or up? How about nuclear power? Adopting a steady state economy allows us to avoid being shoved past the economic limit. We could take our time to evaluate new technology rather than letting it blindly push growth that may well be uneconomic. And the steady state gives us some insurance against the risks of ecological catastrophe that increase with growthism and technological impatience.

Three Limits to Growth by Herman Daly is licensed under a Creative Commons Attribution-NonCommercial-NoDerivatives 4.0 International License.
Permissions beyond the scope of this license may be available at The Daly News.

Herman Daly is a professor emeritus at the University of Maryland, School of Public Policy. From 1988 to 1994 he was a senior economist at the World Bank. Prior to that he was a professor of economics at Louisiana State University. He holds a B.A. from Rice University and a Ph.D. from Vanderbilt University. He co-founded the journal Ecological Economics. He has written many articles and books, including Steady-State Economics, For the Common Good (with John Cobb), Valuing the Earth, Beyond Growth, Ecological Economics (with Josh Farley), and Ecological Economics and Sustainable Development. Prof. Daly is a recipient of Sweden’s Honorary Right Livelihood Award, the Heineken Prize for Environmental Science, the Leontief Prize, the Medal of the Presidency of the Italian Republic, and the NCSE Lifetime Achievement Award. He writes regularly on the Daly News blog of the The Center for the Advancement of the Steady State Economy.

What to Do When You Suspect We’re Headed for Collapse