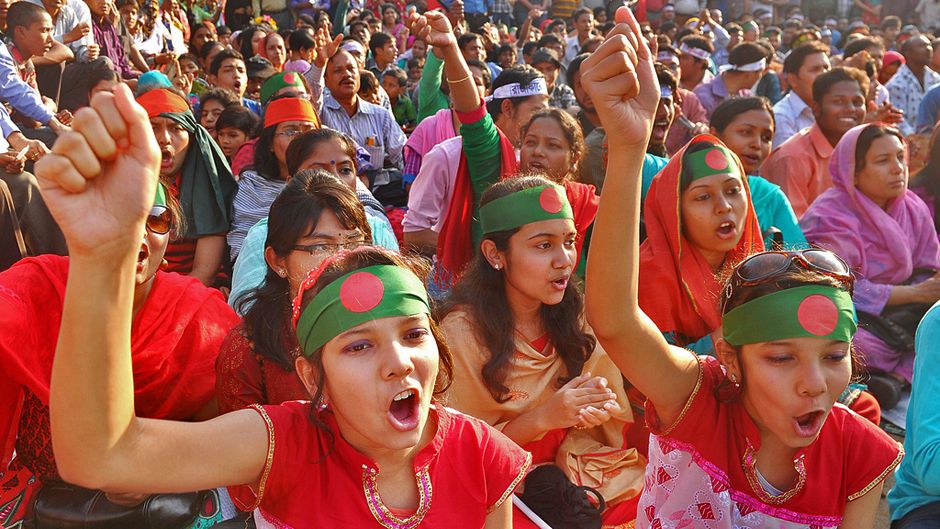 There’s a deep irony that as people around the world mark International Youth Day on 12 August, hardly any attention will be paid to the shrinking space for young human rights defenders who increasingly find themselves on the receiving end of government repression.

In recent years, helped by the connective power of social media, the world has witnessed the growing force of young people fighting for and defending their rights and shaping their communities. Young people are mobilising the masses to hold governments accountable by calling on them to respect, protect and fulfil human rights.

Young people are not just taking a back seat and swiping away on their gadgets, but are organising sit-ins, protests, occupying public space, and directly holding talks with governments.

Of course, young people have always played a key role in social movements where they have a huge stake. But now they are increasingly taking on leadership roles in peaceful protest movements and driving change.

Young people are not just taking a back seat and swiping away on their gadgets, but are organising sit-ins, protests, occupying public space, and directly holding talks with governments. They are not waiting to be told what to do.

This has come at a price. Unfortunately — and too frequently — states respond to young people’s peaceful civic engagement by beating and locking up youth activists.

Take Myanmar, for example. More than 100 student leaders, including human rights defenders and activists, are facing jail time for protesting against the new National Education Law. Among them is Phyoe Phyoe Aung, the 26-year-old leader of one of Myanmar’s largest student movements.

On 25 August she’ll turn 27, but it looks likely she will spend her birthday behind bars as part of an unjust and lengthy prison sentence after she was arrested in March following a violent police crackdown on largely peaceful protests.

Many more across the country continue to be harassed and intimidated in what appears to be a systematic clampdown on the student movement.

This should come as no surprise — the Myanmar authorities have a long history of repressing student-led movements, which they fear will trigger wider calls for political change and threaten their grip on power.

On the other side of the world, things are no different. In June, the security forces in Angola arbitrarily arrested 15 youth activists for participating in a meeting where they peacefully discussed politics and some of the concerns they have regarding the government of President José Eduardo dos Santos, who has been in power for the past 36 years.

They have been accused of planning to disrupt public order and posing a threat to national security. Even young activists who were not in the meeting were accused of being part of it. They are all being held in solitary confinement far away from their homes, making it very hard for their loved ones to visit.

Efforts to secure the release of the activists were severely punished. On 22 July, five people who tried to visit them were detained for nine hours and a few days later a peaceful protest calling for the release of the 15 was violently repressed.

Such heavy-handed responses are not unique to Myanmar and Angola. Everywhere — from Turkey to Venezuela, the United States to Egypt — young human rights defenders have been thrown behind bars for fighting for their rights.

Society does not always welcome the acts of resistance by young human rights defenders. As noted by the United Nations Special Rapporteur on the situation of human rights defenders, “general perception of youth in society, also conveyed by established media outlets, often point to their young age and lack of maturity as grounds for not giving them a say in public affairs. Youth and student movements are seen as troublemakers rather than serious actors that can fruitfully contribute to public debate”.

But denying young people a seat at the table limits opportunities to engage in debates about the progressive realisation of human rights. Even when young people are allowed to participate, it is often meaningless or tokenistic, because it is widely assumed that they are there to learn and develop, rather than to equally contribute to solutions.

This age-centric approach becomes a vicious cycle — very little room is given for young people to actively participate and shape the agenda, while policy makers fail to effectively address the barriers young people face to accessing basic human rights.

We need to take a step back and reflect on what this means for how states react to young people when they are peacefully engaging with society in a bid to create a space for them to participate in decisions that affect their lives.

If governments are serious about the lives of young people, they must ensure that young human rights defenders can claim and exercise their rights freely and without fear.

It is true that meaningful youth civic engagement will not happen overnight and it takes time to create productive inter-generational partnerships that are based on trust. But governments can take the first step by immediately and unconditionally releasing all the human rights defenders detained for peacefully exercising their rights.

Sara Vida Coumans is a Youth Coordinator at Amnesty International.

Clara Fok is a Youth Coordinator at Amnesty International.