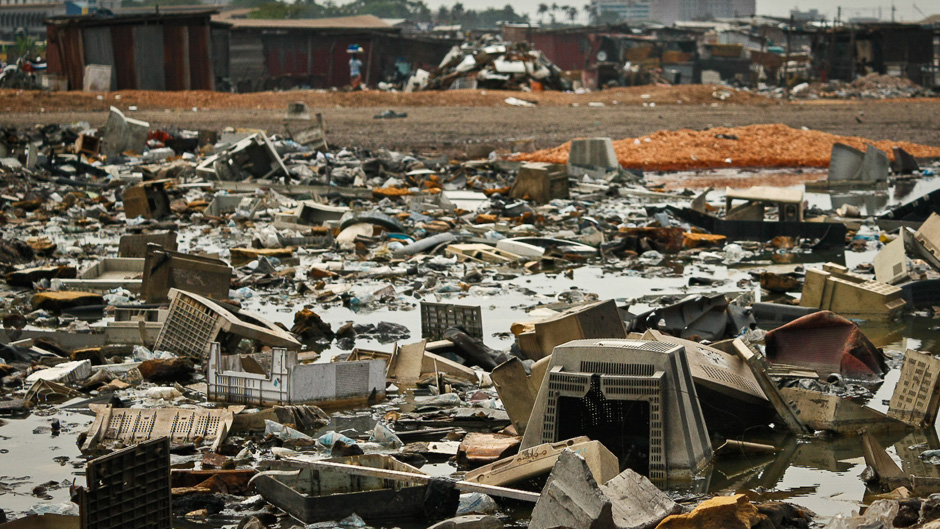 Millions of mobile phones, laptops, tablets, toys, digital cameras and other electronic devices bought this Christmas are destined to create a flood of dangerous “e-waste” that is being dumped illegally in developing countries, the UN has warned.

The global volume of electronic waste is expected to grow by 33 percent in the next four years, when it will weigh the equivalent of eight of the great Egyptian pyramids, according to the United Nations StEP initiative, which was set up to tackle the world’s growing e-waste crisis. Last year nearly 50 million tonnes of e-waste were generated worldwide — or about seven kilograms for every person on the planet. These are electronic goods made up of hundreds of different materials and containing toxic substances such as lead, mercury, cadmium, arsenic and flame retardants. An old-style CRT computer screen can contain up to three kilograms of lead, for example.

Once in a landfill, these toxic materials seep out into the environment, contaminating land, water and the air. In addition, devices are often dismantled in primitive conditions. Those who work at these sites suffer frequent bouts of illness.

An indication of the level of e-waste being shipped to the developing world was revealed by Interpol last week. It said almost one in three containers leaving the EU that were checked by its agents contained illegal e-waste. Criminal investigations were launched against 40 companies. “Christmas will see a surge in sales and waste around the world,” says Ruediger Kuehr, Executive Secretary of StEP. “The explosion is happening because there’s so much technical innovation. TVs, mobile phones and computers are all being replaced more and more quickly. The lifetime of products is also shortening.”

According to the StEP report, e-waste — which extends from old fridges to toys and even motorized toothbrushes — is now the world’s fastest growing waste stream. China generated 11.1 million tonnes last year, followed by the US with 10 million tonnes, though there was significant difference per capita. For example, on average each American generated 29.5 kilograms, compared to less than five kilograms per person in China.

By 2017, Kuehr expects the volume of end-of-life TVs, phones, computers, monitors, e-toys and other products to be enough to fill a 15,000-mile line of 40-tonne lorries. In Europe, Germany discards the most e-waste in total, but Norway and Liechtenstein throw away more per person. Britain is now the world’s seventh most prolific producer, discarding 1.37 million tonnes, or about 21 kilograms per person. No figures are available from government or industry on how much is exported.

Although it is legal to export discarded goods to poor countries if they can be reused or refurbished, much is being sent to Africa or Asia under false pretences, says Interpol. “Much is falsely classified as ‘used goods’ although in reality it is non-functional. It is often diverted to the black market and disguised as used goods to avoid the costs associated with legitimate recycling,” said a spokesman. “A substantial proportion of e-waste exports go to countries outside Europe, including west African countries. Treatment in these countries usually occurs in the informal sector, causing significant environmental pollution and health risks for local populations,” he said.

Few countries understand the scale of the problem, because no track is kept of all e-waste, says the European Environment Agency, which estimates between 250,000 tonnes and 1.3 million tonnes of used electrical products are shipped out of the EU every year, mostly to west Africa and Asia. “These goods may subsequently be processed in dangerous and inefficient conditions, harming the health of local people and damaging the environment,” said a spokesman.

A new study by the Massachusetts Institute of Technology suggests that the US discarded 258.2 million computers, monitors, TVs and mobile phones in 2010, of which only 66 percent was recycled. Nearly 120 million mobile phones were collected, most of which were shipped to Hong Kong, Latin America and the Caribbean. The shelf life of a mobile phone is now less than two years, but the EU, US and Japanese governments say many hundreds of millions are thrown away each year or are left in drawers. In the US, only 12 million mobile phones were collected for recycling in 2011 even though 120 million were bought. Meanwhile, newer phone models are racing on to the market leaving old ones likely to end up in landfills. Most phones contain precious metals. The circuit board can contain copper, gold, zinc, beryllium, and tantalum, the coatings are typically made of lead and phone makers are now increasingly using lithium batteries. Yet fewer than 10 percent percent of mobile phones are dismantled and reused. Part of the problem is that computers, phones and other devices are becoming increasingly complex and made of smaller and smaller components.

The failure to recycle is also leading to shortages of rare-earth minerals to make future generations of electronic equipment.