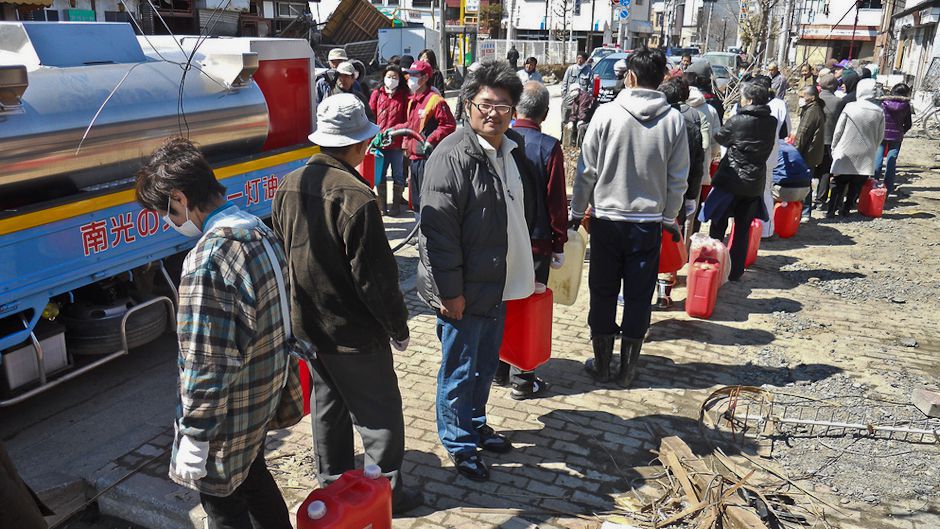 Each Monday for the next few weeks, in light of the recent triple disaster, our new Transition Japan series will consider the challenges faced by Japan in dealing with climate change, peak oil, food security and biodiversity loss. In today’s first installment, Brendan Barrett takes a look at how Japan’s post-tsunami response might help us to respond to peak oil.

For large parts of eastern Japan that were not directly hit by the tsunami on 11 March 2011, including the nation’s capital, the current state of affairs feels very much like a dry-run for peak oil. This is not to belittle the tragic loss of life and the dire situation facing many survivors left without homes and livelihoods. Rather, the aim here is to reflect upon the post-disaster events and compare them with those normally associated with the worst-case scenarios for peak oil.

The earthquake and tsunami affected six of the 28 oil refineries in Japan and immediately petrol rationing was introduced with a maximum of 20 litres per car (in some instances as low as 5 litres).  On 14 March, the government allowed the oil industry to release 3 days’ worth of oil from stockpiles and on 22 March an additional 22 days’ worth of oil was released.

The Tokyo Electric Power Company (TEPCO), which serves a population of 44.5 million, lost one quarter of its supply capacity as a result of the quake, through the closedown of its two Fukushima nuclear power plants (Dai-ichi and Dai-ni), as well as eight fossil fuel based thermal power stations. Subsequently, from 14 March 2011 onwards, TEPCO was forced to implement a series of scheduled outages across the Kanto region (the prefectures of Gunma, Tochigi, Ibaraki, Saitama, Tokyo, Chiba, and Kanagawa).

While the thermal power stations may restart operations soon, the overall shortfall will become even more difficult to manage over the summer period when air conditioning is utilized. The reality is that these power cuts could continue for years, especially since the one of the two Fukushima nuclear plants has effectively become a pile of radioactive scrap.

Related to this, when the Tokyo Metropolitican Government began to announce levels of radioactive contamination of drinking water above permissible levels, this was immediately followed by the rapid sell-out of bottled water, even after the levels dropped again. When bottled water is on sale in local convenience stores after some restocking took place, each customer is only allowed to purchase one 2 litre bottle.

Immediately after the quake, supermarkets outside the disaster area in Tokyo and other major cities began to sell out of foodstuffs, including various instant meals. The electrical appliance stores sold out of batteries, flashlights and portable radios.

As we all know, the twin natural and human tragedies are having impacts beyond the Tohoku region where Fukushima lies, and the Greater Tokyo area. It has been difficult for Japan’s notoriously efficient industries to maintain production, given that they rely on just-in-time systems and which have supply plants (for needed parts) that are located in the zone impacted by these combined disasters. One example is in car production, where major firms have had to suspend work at their factories when key parts are no longer available from the affected region. The fragility of this system of industrial production is glaringly obvious and it is something that peak oil commentators have warned of multiple times.

These food and bottled water shortages, power cuts, fuel-rationing and breakdowns in just-in-time manufacturing have been anticipated by those who take peak oil seriously. It is almost as if eastern Japan is experiencing a peak oil rehearsal, although other regions of Japan are virtually unaffected. If proponents of peak oil are correct, then the rest of the world may experience something similar within the next 5 to 10 years, and hence it is important that we learn valuable lessons from Japan’s response to the current circumstances.

What makes the current situation different from peak oil?

Under a peak oil scenario, the entire world (not just one country) would be affected by a continuous decline in global oil production. The rate of that decline is the key factor. If the rate is very gradual (a few percent points each year), then economies and their food and energy production and distribution systems in particular will have more time to adapt.

In such circumstances, we could envisage a significant decline in the flow of goods and people across the globe — a slowing or a potentially grinding halt. For a country like Japan that relies heavily on the import of food, having only 40% self-sufficiency, the real peak oil scenario would have dire impacts.

Under the present situation, Japan can still rely on imports to alleviate food supply problems. This is fortunate as over 600 farms, 125 harbours and 2,333 fishing vessels were destroyed by the tsunami (note: new data from Japanese government on 5 April 2011 indicates damage to 7,872 farms, 189 harbours, and the loss of 18,754 fishing vessels), not to mention the thousands of people who made their livelihoods from agriculture and fishing who are either deceased or displaced. Furthermore, the 20-30 km zone around the Fukushima Dai-ichi plant may not be used for food production for some time to come and the good reputations of those areas for providing clean produce may take even longer to be restored.

In a global peak oil scenario, it is highly likely that food prices would increase significantly. To some extent this is happening. For instance, in February 2011 it was reported that food prices reached a record high due to poor harvests, rising oil prices (at US$105 per barrel) and increasing demand for foodstuffs due to rising population and incomes. The conflict in Libya was predicted to further exacerbate the food and oil prices. In fact, conflict and civil unrest in oil producing countries is another facet of various peak oil scenarios as nations scramble for the remaining resources. It is something that Richard Heinberg describes as the “last one standing” scenario in which powerful countries will use their assets to promote their own survival at the expense of everyone else.

So in the current predicament facing Japan, the situation is ameliorated by the ability of different nations to offer support and continue trading (for instance, Evian is selling a lot of bottled water to Japan at the moment). This certainly would be more difficult under some of the extreme peak oil scenarios, where rapid oil decline is involved.

While the consequences of the current disaster for Japan have been tragic in terms of the loss of life and while it is clear that the emotional, psychological and economic impacts are enormous, there are real signs of hope.

The first important lesson to recognize is the way that Japan’s leaders acted rapidly and responsibly. We have already indicated that fuel rationing was in place from 12 March 2011. The reality is that Japan is one of the most disaster-prepared nations in the world and regularly undertakes wide-scale drills. This practice proved to be of vital importance in helping people, communities and institutions cope with the major challenges that they have had to face.

Government officials quickly recognized that people were hoarding food supplies and began to publicly request that they only buy what they need. This was followed up by a series of public service announcements by the Japan Ad Council under theme of “What I can do now.”

The Minister in charge of consumer affairs, Renho Murata, frequently called on people not to panic buy and hoard food. She argued that this kind of activity was undermining the ability to provide relief supplies to the quake hit areas. At the same time, the general public and the private sector in the Kanto region were encouraged to comply with the scheduled power outages and to significantly reduce their energy consumption. Everybody responded positively – keen to play their part in solving this problem.

Prime Minister Naoto Kan in particular made an appeal to the people of Japan on 13 March 2011 when he said, “We Japanese have overcome many very trying situations in the past to create our modern society of peace and prosperity. I firmly believe that through our citizens working together to respond to this great earthquake and tsunami, we will certainly be able to overcome this crisis.”

This message has been echoed across the media and the Japanese public has responded by showing calmness, patience, respect for each other and mutual support. If anything, they have exemplified Richard Heinberg’s power down scenario — the path of cooperation, conservation and sharing. Whether they can hold true to this path over a prolonged period of time remains to be seen.

In the global Transition Movement, they often refer to the “head, heart and hand” approach to coping with peak oil and climate change, as discussed in Rob Hopkin’s Transition Handbook. Put simply, the head signifies the exploration needed about how we can re-orient our lives to become more local and small scale as our awareness increases of the energy crisis we are heading into. The heart symbolizes how we can generate positive visions of the future and how they can be harnessed to overcome the feelings of powerlessness in the face of these immense challenges. The hands are a representation about understanding how the transition model can be employed in practice for specific communities.

For many communities in eastern Japan, the current circumstances represent the first time they have had to consider questions about food and energy security. The vast majority appear, quite naturally, to share the overwhelming desire to get back to normal, back to the way things were before. But there are also signs of the head, heart and hand approach as many Japanese commentators are asking questions about how Japan will develop in the future.

If Japan is to build back better, then it should perhaps do so by building more resilient, more locally oriented communities in the areas affected by the quake and tsunami, and beyond. In fact, this is a chance to reconsider completely the development path for Japan towards one that is less vulnerable, less reliant upon fossil fuels, and ideally a low carbon society.

To borrow the words of Prime Minister Kan once again when he called upon his compatriots:

“Through this resolve, let us all now — each and every individual — firmly reinforce our bonds with our families, friends, and communities, overcoming this crisis to once more build an even better Japan.”