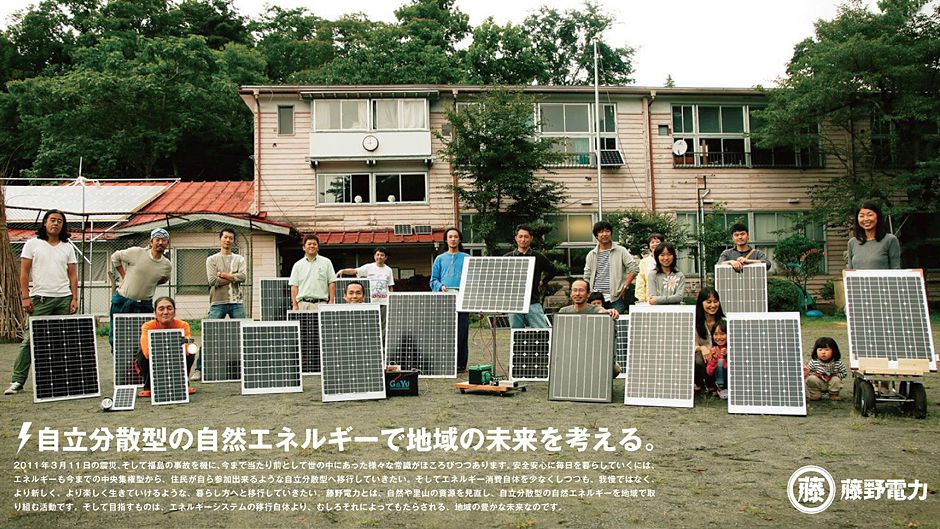 Fujino Town in Sagamihara City in Japan’s northwestern Kanagawa Prefecture is a peaceful place with a population of about 10,000 people. Located in a valley and surrounded by abundant nature with mountains and lakes, though it is only one hour away from central Tokyo, it is known as an artists’ haven, promoting and displaying art works around town.

Fujino (officially renamed Midori Ward in 2010) is also home to a Transition Town initiative. As we have explained before on Our World 2.0, the Transition Town Movement is an international network of grassroots groups that form to apply the theory of permaculture to community revitalization. The concept of permaculture, which originated in Australia, is a practical approach to designing a lifestyle that will create sustainable human environments. The word “permaculture” comes from the combination of “permanent” and “agriculture”, later expanded to signify “culture”.

Working to build resilience in the face of climate change and peak oil, the Transition approach can be particularly instructive in demonstrating how to accomplish this shift using bottom-up rather than top-down methods (the top-down approach has been characteristic of most Japanese eco-towns). The Transition Movement promotes action at the local level and encourages communities to draw on their own creativity, building on existing regional resources.

The world’s first Transition Town was initiated in the fall of 2005 by permaculture teacher Rob Hopkins in Totnes, a small town in England. Supporters promoted the movement across England and all over the world. Currently, there are around 450 official Transition Initiatives and another almost 600 communities preparing to become official, according to the Transition Network.

Fujino is one of three fully functioning Transition Movement initiatives in Japan, although over twenty are in the works. Established in the fall of 2008, Transition Fujino (which we’ve featured on Our World a few times in the past) started up by sharing information on the core issues through events like briefings and film presentations.

Then a local currency, the Yorozuya (meaning “general store” in Japanese), was launched and began playing a major role in stimulating local networking. The Yorozuya project started with 15 members in 2009 and has now grown to include 150 households. Those participating can exchange goods and eat at restaurants using the currency. The network also thrives by targeting local needs, such as providing pet care, weeding vegetable gardens, and picking up children. It further serves to connect those in need with those who can give a hand. Following the Great East Japan Earthquake in 2011, the network displayed a great ability to support disaster-affected areas by collecting cash donations, gathering and sorting emergency relief supplies and regularly holding charity events.

Transition Towns in Japan identify themselves with the initials “TT”, which also stand for the Japanese words tanoshiku and tsunagaru, meaning “having fun” and “networking”. True to these words, people involved in Transition Fujino work towards transition while making it a point to enjoy life and avoid overworking. A resilient, secure and happy way of life is reinforced by the warm connections between local people that are nurtured by the Transition Town movement.

Various working groups were launched to further use and engage the network built via Yorozuya. These groups include the Moribu — forest department in Japanese — which addresses the conservation of satoyama (traditional land management) forestry through tree plantation thinning, and the Ohyakusho (farmers) Club, which aims to increase the food self-sufficiency rate. Now, four years after the launch of Transition Fujino, local people are voluntarily engaging in these areas of interest.

After the Great East Japan Earthquake in March 2011 (3.11) and the ensuing accident at the Fukushima Daiichi Nuclear Power Plant, many Japanese people began thinking about the origins of the electricity they were purchasing and other energy issues that they had been ignoring.

Before 3.11, all-electric homes were popular because they were considered convenient and economical. However, the blackouts after the earthquake greatly impacted the daily lives of those in such housing. Many people began recognizing the importance of energy self-sufficiency and diversity and started to take an interest in systems that can generate electricity at home, such as solar power, and in electric cars for their role as a back-up power supply.

In the wake of the 3.11 disaster, the working group Fujino Denryoku (“denryoku” meaning “electric power”) was established to help people break away from their dependence on electricity provided by the traditional power utilities and transition towards self-sufficient, locally-distributed energy created with the participation of local people.

The group’s first project was to supply power for lighting and sound systems at a local festival. Project teams also went out to festivals in the earthquake disaster zones in the Tohoku region and offered support to the affected areas by supplying power generated with renewable energy.

The working group also holds monthly “Solar Power System Workshops”, where participants, including beginners, can easily assemble a home system by connecting photovoltaic (PV) panels and batteries, etc., as part of a campaign called “An Energy Shift Starting at Home”.

At the first workshop in December 2011 participants initially learned from one another, but the workshop began to attract attention from a wider public and within six months it was being introduced on TV and in magazines. Now the workshops host not only local residents, but increasingly people from outside communities.

[quote quote=”It takes two or three hours to complete the PV panel assembly and when participants connect lights to their hand-made power generators, the lights come on and there is a lot of applause.” type=”text” ]

These workshops take place in a classroom of an abandoned elementary school, the former Makisato Elementary School, which serves as an activity base for Transition Fujino. Here assembles a variety of participants, from parents and children to young ladies. The small classroom is filled with sub-groups — each assembling a PV system with the help of staff members who explain the process — and over a dozen observers.

The assembly procedure is so easy that even children can do it. However, panels assembled in the wrong order can short out and be dangerous. Thus the workshop is exciting and participants listen intensely to the explanation while observers ask questions and take pictures. It takes two or three hours to complete the assembly and when participants connect lights to their hand-made power generators, the lights come on and there is a lot of applause.

The fee for participating in the workshop is ¥42,800 (about US$542), which includes the standard assembly kit. One participant said, “If I bought the necessary materials on my own, the cost would be about the same. I decided to join because I can learn how to assemble the system for the price of the materials.”

An average monthly salary in Tokyo is about ¥240,000 (about US$3,038) excluding tax, so the solar power generator costs only about 20% of a month’s salary. The standard kit produces a 50-watt PV system and many participants use this system for charging their laptops and cellphones. After a day of charging, the system can power a 50-watt notebook computer from four to six hours.

By summer 2012, the accumulated output of all the solar power generators assembled at the workshop amounted to over 10,000 watts. At local festivals and events, organizers ask past workshop participants to bring their systems to contribute to the electric supply needed to power the events.

Although the system does not suffice for all the electricity needed, it can reduce dependency on power utilities. To enhance energy independence means to have a “lifeline backup”, boosting resilience.

Other projects are also underway. In May 2012, the group received 170 used PV panels from a university professor acquainted with the group. Fujino Denryoku is attempting to use these panels to provide all the energy needs for their base at the abandoned elementary school, while charging electric vehicles with the surplus. They also aim to improve energy self-sufficiency by using local resources other than solar power, such as small-scale hydro power and wind power.

Not only energy, but in all corners of our lives, an increase in local self-sufficiency and an uncoupling from our dependency on the global system can enhance local resilience and help us to cope firmly with large-scale contingencies such as earthquakes and other crises. Transition Fujino is helping increase local independence through their activities using the community’s interpersonal bonds, resources and manpower.

The Transition Movement helps develop independent sustainable communities by using local resources, traditions and culture. Thus the form of their activities varies from community to community. In Japan, as of July 2012, one transition town starts up every week, if we include those at the preparatory stage. Unique transition towns like Fujino will soon be born all over Japan. We are looking forward to following the future of Transition Towns.

This post is based on an article written by Yuriko Yoneda for the Japan for Sustainability (JFS) newsletter. JFS is a non-profit organization providing information on developments and activities in Japan that lead toward sustainability.

Transition Town Fujino Goes for Local Energy Independence by Carol Smith is licensed under a Creative Commons Attribution-NonCommercial-ShareAlike 3.0 Unported License.
Based on a work at http://www.japanfs.org/en/mailmagazine/newsletter/pages/032303.html.