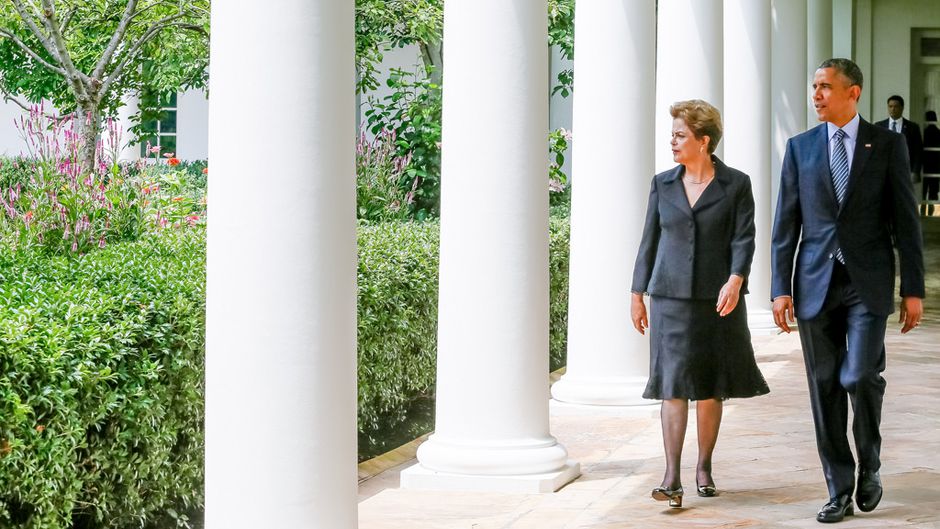 On Tuesday, Brazil and the United States announced a joint effort to address climate change and boost renewable energy during a visit by Brazilian President Dilma Rousseff to the White House.

Specifically, both countries pledged to increase renewable energy targets to 20 percent by 2030. The target excludes hydropower, an especially contentious power source in Brazil, where large and valuable ecosystems can be flooded out to make way for reservoirs.

Brazil also committed to restore and reforest 12 million hectares — an area roughly the size of Pennsylvania — and to eliminate illegal deforestation.

“The environmental agenda is absolutely key and essential for our two countries,” Rousseff said during a press conference Tuesday afternoon. She also vowed to fight for an “ambitious” climate agreement when international leaders and negotiators gather in Paris for a climate summit at the end of the year.

The joint pledge came within hours of China’s official submission of its climate targets to the United Nations in preparation for the Paris climate summit, making Tuesday a significant milestone in global efforts to build momentum for a global treaty to fight climate change. That treaty is set to be agreed upon at the end of 2015, and should go into effect after 2020.

“In these last five months before the climate negotiations in Paris, this is a chance for Obama and Rousseff to demonstrate leadership and come out in front with strong commitments,” Amanda Maxwell, Latin American project director with the Natural Resources Defense Council, told ThinkProgress. “This focus on renewables is especially important as emissions from Brazil’s energy sector have been rising due to increased use of fossil fuels, and the planned large hydropower projects have been so controversial.”

The Belo Monte dam, currently under construction, will flood 1,500 square kilometers of rainforest — an area larger than New York City — and displace 40,000 indigenous people. Federal prosecutors recently determined the those constructing the dam, which would be the world’s third-largest hydroelectric energy producer, had violated agreed-to terms regarding the relocation of locals.

Maxwell also said a poll “found that 95 percent of Brazilians feel climate change is impacting their lives yet 85 percent also feel the government is not doing enough to address it.”

Rousseff said she “very much welcomes” the decision to pursue a joint renewable energy goal and that it will “prove extremely important in reducing greenhouse gas emissions”. She also said it “speaks to our clear-cut commitment to making sure global temperatures will not rise above two degree Celsius”,

Brian Deese, Obama’s top adviser for energy, told reporters on Tuesday that “this is a big deal” and that, while the target is ambitious “it’s one that’s actually achievable in a way that will actually create new, low-cost opportunities for the American economy.”

Clean energy currently represents about seven percent of the United States’ power sector, excluding hydropower, so meeting the target will involve tripling renewable energy capacity in the next 15 years. The EIA expects nonhydropower renewable power generation to increase 6.9 percent in 2015. While solar power production will grow rapidly, energy from wind, biomass, and biofuel will make up the largest percentages.

Rousseff has been suffering through a political firestorm in Brazil of late, after a scandal surrounding state-controlled oil giant Petrobras, slow economic growth, and a crippling drought around São Paulo have engaged much of the country in a heated conversation. The presence of the 2014 World Cup and 2016 Olympics have made the issues more prominent on a global scale. Two years ago Rousseff canceled a state visit to the United States after the Snowden documents revealed the US government had spied on her communications.

In March, João Augusto de Castro Neves wrote in the World Politics Review that the drought could force “the government to enact measures to curb power and water use in the coming months” and that the low reservoir levels are “the result not only of historically little rainfall, but also of federal and state governments’ refusal to impose any restrictions on consumption and use during an election year.”

With both leaders now looking forward after tough reelection campaigns in the last several years, climate change has risen to the top tier of their international agendas — and there is a lot of potential for progress and collaboration. The country — home to the vast Amazon rainforest — cut its greenhouse gas emissions 41 percent between 2005 and 2012, primarily by slowing deforestation. A recent study found that Brazil has kept 3.2 billion tons of carbon dioxide out of the atmosphere since 2004 — more than any other country.

However, deforestation is still occurring. According to the the World Wildlife Fund, Brazil lost 4,571 square kilometers of rainforest in 2012, and 5,891 in 2013.

The twin goals of ending deforestation and ramping up renewables give Brazil a lot to work towards.

Jeremy Martin, director of the energy program at Institute of the Americas told ThinkProgress that while “Brazil has made great progress on incorporating renewables,” the country “has always been a hydro country.”

“Dealing with this will continue, particularly as the drought forces the issue, but it will not get resolved quickly or easily,” he said.

Is the US Overplaying Its Energy Hand?