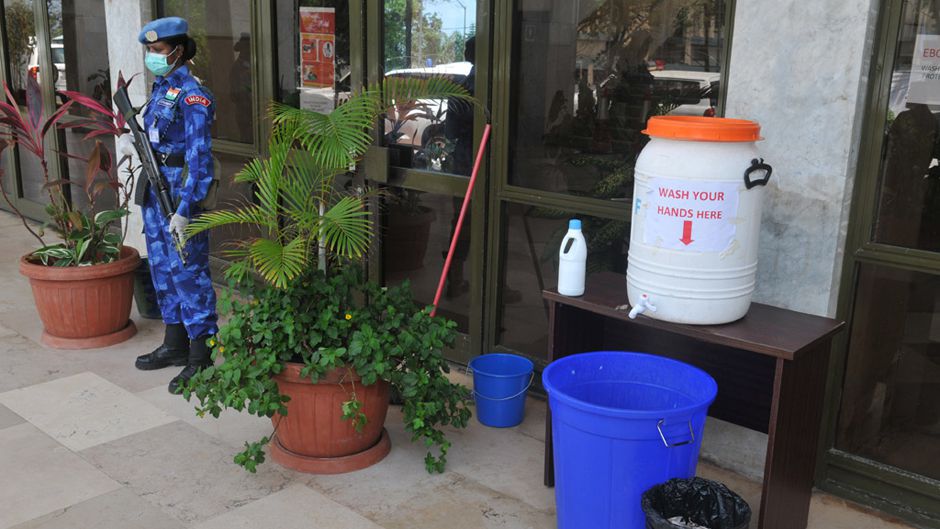 Ebola outbreak: a peacekeeper with the UN Mission in Liberia (UNMIL) wears a protective mask while on duty at UN offices in the capital city of Monrovia. Photo: © UN Photo/Andrey Tsarkov.

The Security Council, in its first emergency meeting on a public health crisis, today declared the Ebola outbreak in West Africa a threat to peace and security, as Secretary-General Ban Ki-moon announced that the United Nations will deploy a new emergency health mission to combat one of most horrific diseases on the planet that has shattered the lives of millions.

“This international mission, to be known as the United Nations Mission for Ebola Emergency Response, or UNMEER, will have five priorities: stopping the outbreak, treating the infected, ensuring essential services, preserving stability and preventing further outbreaks,” Mr. Ban told the Security Council.

“Under the leadership of a Special Representative of the Secretary-General, the Mission will bring together the full range of UN actors and expertise in support of national efforts,” he said, adding that details of the mission were sent in a letter to the Security Council and the UN General Assembly.

The Secretary-General said the mission’s effectiveness will depend crucially on support from the international community.

“Our best estimate is that we need a 20-fold increase in assistance,” he said. The United Nations this week outlined a set of critical needs totalling almost $1 billion over the next six months.

Mr. Ban spoke before the Security Council unanimously adopted a resolution, sponsored by 131 countries — reportedly more than any other sponsors of a resolution to date in the chamber — “determining that the unprecedented extent of the Ebola outbreak in Africa constitute a threat to international peace and security”.

“None of us experienced in containing outbreaks has ever seen, in our lifetimes, an emergency on this scale, with this degree of suffering and with this magnitude of cascading consequences,” said WHO Director-General Margaret Chan.

Expressing concern about the detrimental effect of the isolation of Ebola-hit Liberia, Guinea and Sierra Leone as a result of trade and travel restrictions imposed on the affected countries, the Council called on Member States, including of the region, to such restrictions imposed as a result of the outbreak, and to facilitate the delivery of assistance, including qualified, specialized and trained personnel and supplies to the affected countries.

Briefing the Council members, Dr. Margaret Chan, Director-General of the UN World Health Organization (WHO) said: “None of us experienced in containing outbreaks has ever seen, in our lifetimes, an emergency on this scale, with this degree of suffering and with this magnitude of cascading consequences.”

Emphasizing that the current reports that show that more than 5,500 people have been infected by Ebola and more than 2,500 killed by it in West Africa are “vast underestimates,” Dr. Chan said the WHO Ebola Response Roadmap outlines 12 critical actions.

“The fact that the United States, United Kingdom, China, Cuba and other countries are using a variety of assets, including military, speaks to the complexity of the challenge,” she said.

“This surge in support could help turn things around for the roughly 22 million people, in the hardest-hit countries whose lives and societies have been shattered by one of the most horrific diseases on this planet,” Dr. Chan said.

The Secretary-General said: “The penalty for inaction is high. We need to race ahead of the outbreak — and then turn and face it with all our energy and strength.” He called out to non-traditional donors, the business community, for example, to contribute in the health, transport, communications and information sectors.

Both the UN Secretary-General and the President of the Security Council for the month of September, US Ambassador Samantha Power, said only twice before has the Security Council met to discuss the security implications of a public health issue — both times on the AIDS epidemic.

Today’s meeting was the first emergency meeting on a public health issue, according to the Security Council President.

The Secretary-General, as well as the Security Council in its resolution, expressed concern about the travel restrictions imposed by major airlines and shipping companies to the affected countries.