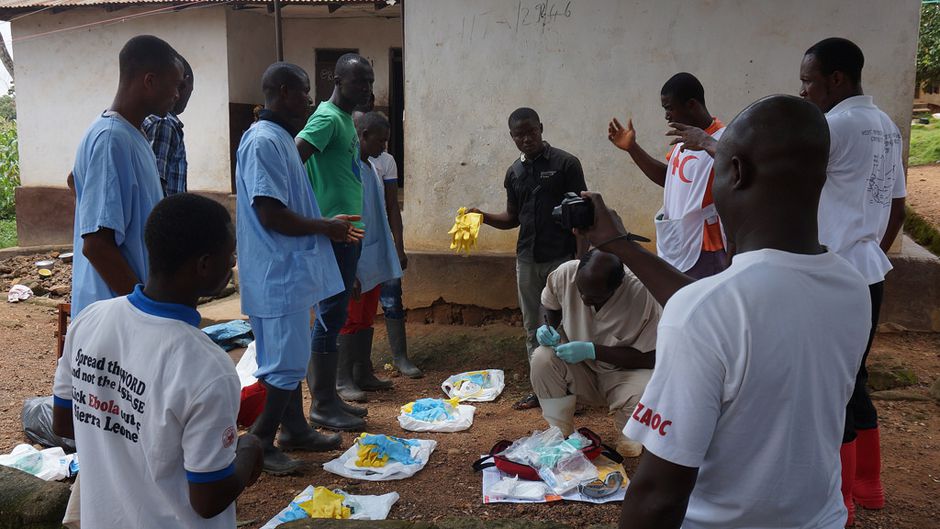 Secretary-General Ban Ki-moon today called on the international community to step up its efforts to respond to the Ebola crisis and turn pledges into action, while the United Nations health agency warned of continuously deteriorating situation in Guinea, Liberia and Sierra Leone.

“Dozens of countries are showing their solidarity. But we need to turn pledges into action. We need more doctors, nurses, equipment, treatment centres and medevac capacities.”

The Secretary-General appealed to the international community to provide the $1 billion that will enable the UN and partners to “get ahead of the curve” and meet the target of reducing the rate of transmission by 1 December.

Mr. Ban’s call to action echoes the stark warning issued to the Security Council last week by Anthony Banbury, head of the UN Mission for Ebola Emergency Response (UNMEER), who said the world must move quickly to ensure that at least 70 per cent of all people infected with Ebola are getting treatment by 1 December, and that 70 per cent of all burials occur without contamination by that date. Failing to reach those targets would mean “we fail entirely. With each passing day… the number of people infected grows exponentially,” he said.

The latest figures from the UN World Health Organization (WHO) indicate a total of 8,997 cases in seven countries [Guinea, Liberia, Nigeria, Senegal, Sierra Leone, Spain and United States] and 4,493 deaths. The disease has taken its toll on healthcare workers, with 427 infected and 236 dead.

Mr. Ban saluted the courage of the medical and support personnel working on the front-lines to respond to the crisis, and offered condolences to the family of Sudanese national AbdelFadeel Mohammed Basheer, a lab technician who was the second person from the UN Mission in Liberia to succumb to the disease.

In addition to the recent establishment of UNMEER to coordinate and scale up action, Mr. Ban said he has formed a Global Ebola Response Coalition.

“Ebola can be beaten if we work together effectively. We all have a responsibility to act,” he stressed.
WHO is warning of a continuously deteriorating situation in Guinea, Liberia and Sierra Leone – the three most affected countries.

“Our data shows that cases are doubling every four weeks. The disease is still widespread in Guinea, Liberia and Sierra Leone and there is persistent transmission of the virus,” Dr. Isabelle Nuttall, WHO Director for Global Capacities, Alert and Response, told a news conference in Geneva.

An increase in new cases in Guinea is being driven by a spike in cases in the capital, Conakry, and the nearby district of Coyah. In Liberia, there is almost certainly significant under-reporting of cases from the capital, Monrovia, while in Sierra Leone, intense transmission is still occurring in the capital city of Freetown and its surroundings.

The total number of operational laboratories in the three countries will increase in the coming weeks, as a Russian Mobile Laboratory becomes operational in Guinea, and a Public Health England laboratory begins to provide diagnostic testing in the Western Rural area of Sierra Leone.

Dr. Nuttall added that the number of cases is expected to top 9,000 this week and the number of deaths will hit 4,500.
Also today, the UN Population Fund (UNFPA) warned that Ebola is wiping out gains in safe motherhood made in Guinea, Liberia and Sierra Leone.

“The reality is that pregnant women are facing a double threat – dying from Ebola and from pregnancy or childbirth, due to the devastating impact of Ebola on health workers and health systems,” said UNFPA Executive Director, Babatunde Osotimehin. “Ebola is not only killing those infected, but also those affected. Pregnant women and girls are at greater risk.”

An estimated 800,000 women in these three countries should give birth in the next 12 months. All will require antenatal, delivery and postnatal care and related emergency obstetric support, the agency stated in a news release.

But many pregnant women are afraid to visit or turned away from overstretched health facilities. Of these women, more than 120,000 could die of complications of pregnancy and childbirth, if the required life-saving emergency obstetric care is not urgently provided.

“The situation for pregnant women in Ebola crisis countries is devastating. Gains in maternal health and family planning are being wiped out and women are desperate for information and services to protect their health and that of their babies,” said Dr. Osotimehin.

He called for urgent funding to meet the reproductive health needs of women and mothers in the three countries, adding that UNFPA needs $64.5 million for this effort in the next three months.