UN Peacekeeping Cuts Could be a Disaster for Women and Girls 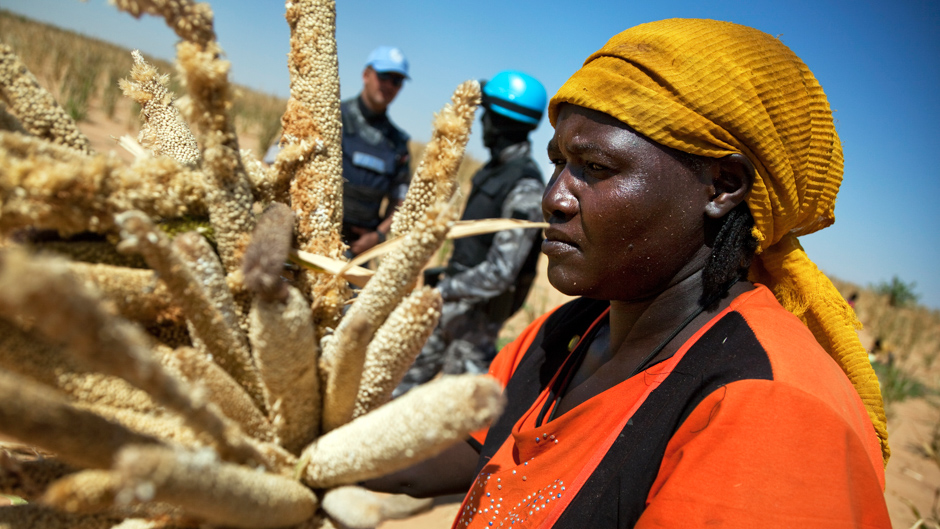 A woman is escorted by UN peacekeepers as she harvests millet near El Fasher, Sudan. Photo: UN Photo/Albert Gonzalez Farran

The United Nations General Assembly has voted to cut US$600 million from the UN’s US$8 billion peacekeeping budget. The measure responds to pressure coming from the Trump administration, which has pledged to reduce the United States’ contribution to the organization.

“I have seen value in the UN,” the US Ambassador to the United Nations, Nikki Haley, recently stated. “And at the same time, the UN has fat around the edges.”

Given that the U.S. is the biggest contributor to the UN’s peacekeeping budget link, the policy will be felt across all 15 missions currently deployed, including those 10 missions with a direct mandate to protect civilians, notably girls and women.

The cuts were on the agenda when the UN Department of Peacekeeping Operations hosted a conference in New York between 6–8 July, where the deputy chiefs of defense of more than 100 troop-contributing countries gathered to discuss the challenges of peacekeeping and how to adapt to the budget cuts from the military side.

Cutting the budget is not an intrinsically bad policy. On one hand, it will trigger a comprehensive review of all missions deployed and the work of the UN Department of Peacekeeping Operations as a whole. This is an opportunity for Secretary-General Antonio Guterres to fulfill a campaign promise to push through much-needed reform of the UN system, and peacekeeping in particular.

On the other hand, if the cuts are too drastic, they can translate into fewer military and civilian personnel being deployed, which can pose a risk to missions’ effectiveness, particularly in the protection of civilians.

While the impact these budget cuts will have on civilians as a whole is being discussed, the impact on women and girls has once again been absent from the conversation.

A reduction in peacekeeping personnel is likely to have an impact on women and girls in all aspects of post-conflict and conflict societies, in particular by decreasing safety from sexual violence.

It is well known that women and girls are disproportionately affected by violent conflict. The nature of conflict has changed drastically over the years, and today, the overwhelming majority of casualties from war are civilians, many of them women and children.

The protection of civilians, and especially women and girls, is one of the major tasks of UN Peacekeeping. Some peacekeeping operations have been tainted by scandals, especially sexual abuse by peacekeepers, which have undermined the legitimacy of the organisation, particularly in the eyes of the citizens of countries where they are deployed. However, a 2014 report by the UN Office of Internal Oversight Services found that, overall, peacekeeping missions have a positive impact in protecting civilians, especially women and girls.

One of the most dramatic mistakes that could be made with these budget cuts is to sideline the needs of women and girls in conflict zones. Peacekeeping missions do not only protect civilians from the conflict itself, but they also do crucial work in the protection and empowerment of women and children by helping them to break the cycle of violence, ensuring they get the education they need in order to be empowered members of society, and by gender mainstreaming all aspects of peacekeeping operations.

A reduction in peacekeeping personnel is likely to have an impact on women and girls in all aspects of post-conflict and conflict societies, in particular by decreasing safety from sexual violence. This also has drastic long-term effects, where, for many girls, a future without peacekeepers would be a future without schools, since their way to get to school will no longer be safe.

In Sudan, for example, the UN Security Council adopted a resolution last month to renew the mandate of the hybrid mission it co-administers with the African Union (UNAMID). However, as its mandate is the first to be reviewed since the announcement, its structure will reflect the budget cuts.

By the year 2018, the mission will have reduced its troop numbers from 13,000 to 8,735. While diplomats in New York agree that given the current budgetary climate, every mission has to adapt to the new reality, many human rights groups have expressed concern about the drastic reductions planned and expect the situation in Darfur to worsen drastically once peacekeepers have withdrawn.

The United Nations Department of Peacekeeping will have to show flexibility and, more importantly, creativity in order to deal with its stormy present.

Human Rights Watch predicts that with the expected cuts, civilians in large parts of the country will remain unprotected and aid groups will be unable to reach needy parts of the population, due to lack of security patrols and escorts by the peacekeepers. All of these will have dramatic effects for women and girls, whose situation is already dire.

When discussing how cuts will affect women and girls, we also need to consider training, which is already struggling to cover a multitude of complex topics in a short period of time. One danger is that if we fail to include the role of women and girls throughout the entire discussion of the budget cuts, gender-sensitive training will not be sufficiently focused on.

The role women and girls play in conflict was recognised by the landmark UN Security Council resolution 1325. And while this resolution has succeeded in giving much-needed attention to the role of women in conflict and post-conflict, 15 years after the resolution, there is still much left to be done. Peacekeeping needs to be at the forefront of these efforts, and budget cuts need to be designed in a way that does not affect the empowerment and protection of women and girls.

The United Nations will have to do more with much less, at least for the foreseeable future. The United Nations Department of Peacekeeping will have to show flexibility and, more importantly, creativity in order to deal with its stormy present. Cutting budgets will not necessarily have a negative impact on the protection and empowerment of women and girls; however, it is of grave concern that, so far, there has not been much discussion on how best to protect this aspect of peacekeeping missions.

Including gender, peace and security at the beginning of the discussions could present a real chance to make progress, while neglecting this conversation can throw us back decades.

It will be paramount for the sake of the legitimacy of UN Peacekeeping to ensure that women and girls are protected on the ground.

He supports the management of the Communications Office, with responsibilities encompassing strategy, programme and project management, liaising with UN and other organisations, institutional governance and reporting. Prior to this he worked for the United Nations in Latin America at the Department of Public Information

Diego is also a PhD candidate in History of International Relations at Leiden University. His research is mainly focused on UN peacekeeping, global governance and international organisations. He co-edits a UNU Blog Series on the Challenges to Peacekeeping in the 21st Century and authors articles on peacebuilding, multilateral affairs and development.

Diego works as associate project manager of the UNU Jargon Buster App project, which aims to help further and clarify cross-interdisciplinary academic and policy dialogues for all parties involved – be they graduate students, international organisations or the wider public.

Protecting Female Refugees against Sexual and Gender-based Violence in Camps