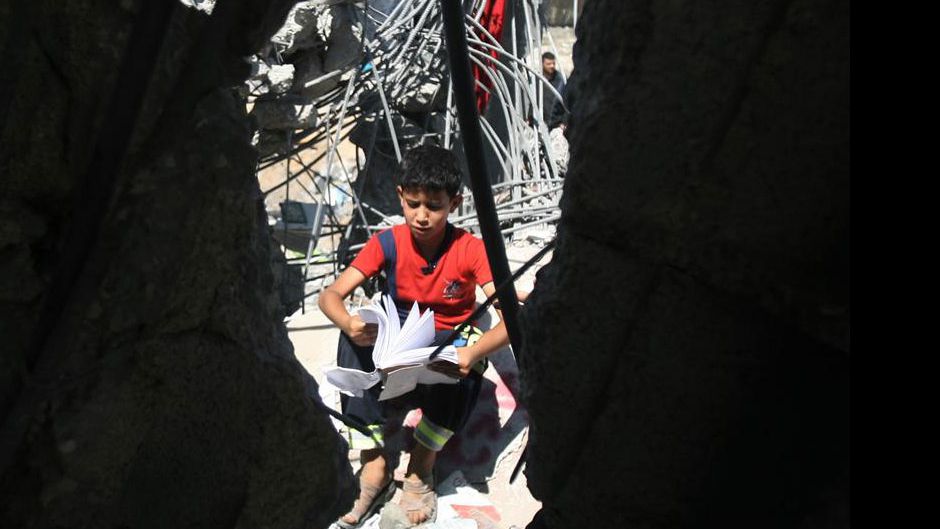 A boy looks through a schoolbook as he sits in the rubble of a home destroyed during an Israeli air strike on the city of Khan Yunis. Photo: © UNICEF/NYHQ2014-0894/El Baba.

Meeting in an emergency session today, the Council adopted a resolution agreeing to send the investigative team by a vote of 29 countries in favour, with 17 abstentions and a sole negative vote by the United States, in which it strongly condemned the failure of Israel to end its prolonged occupation of the area.

The Council condemned in the strongest terms the “widespread, systematic and gross violations of international human rights and fundamental freedoms” arising from the Israeli military operations since 13 June, and called for an immediate ceasefire.

“The Council further condemned all violence against civilians wherever it occurred, including the killing of two Israeli civilians as a result of rocket fire,” according to the Office of the High Commissioner for Human Rights (OHCHR).

In the resolution, the Council also demanded that Israel immediately reopen the occupied Gaza Strip and called upon the international community to provide urgently needed humanitarian assistance and services to the Palestinian people in the Gaza Strip.

Navi Pillay, who opened the special session, said that the current is the third serious escalation of hostilities in the area during the six years that she has been the UN High Commissioner for Human Rights. As in 2009 and 2012 “children, women, the elderly and persons with disabilities” suffer the most. 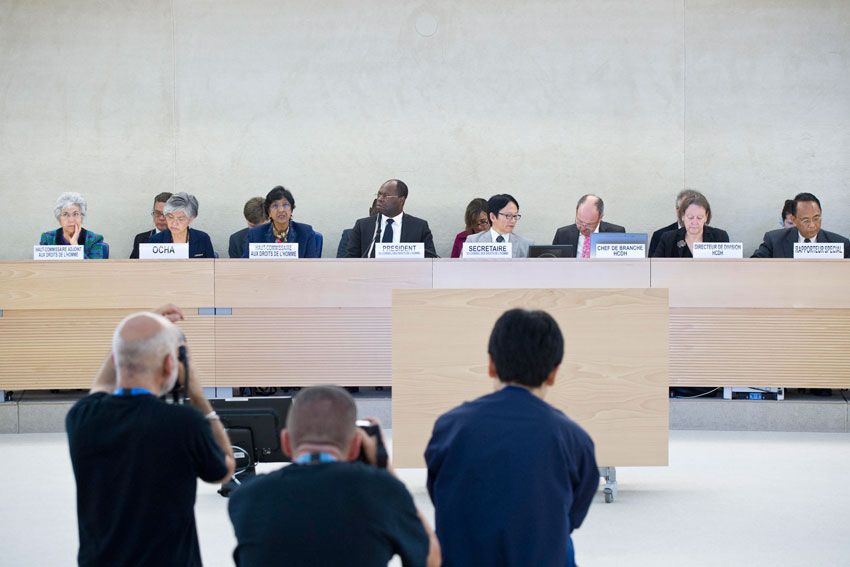 Kyung-Wha Kang, Assistant Secretary-General for Humanitarian Affairs and UN Deputy Emergency Relief Coordinator, said that since the Israeli military launched operation “Protective Edge” on 7 July, over 600 Palestinians have been killed in the Gaza Strip and another 3,504 were injured. In addition, 28 Israelis, including the two civilians cited in the Council’s resolution, were killed.

“In Gaza, 443 or 74 per cent of the killed are civilians,” Ms. Kang said. “One third of civilians killed so far are children. One child has been killed each hour in Gaza over the past two days.”

Both officials deplored that every seven-year-old girl and boy in Gaza today has lived their entire life under siege, as the most recent fighting is their third major conflict and humanitarian catastrophe, compounding the humanitarian crisis caused by the seven year blockade of the enclave.

“I unequivocally reiterate to all actors in this conflict that civilians must not be targeted,” Ms. Pillay said. “It is imperative that Israel, Hamas and all Palestinian armed groups strictly abide by applicable norms of international humanitarian law and international human rights law.”

She underscored the importance of applying principles of distinction between civilians and combatants and between civilian objects and military objectives, as well as proportionality and precautions in attack.

“Not abiding by these principles may amount to war crimes and crimes against humanity,” the High Commissioner said. 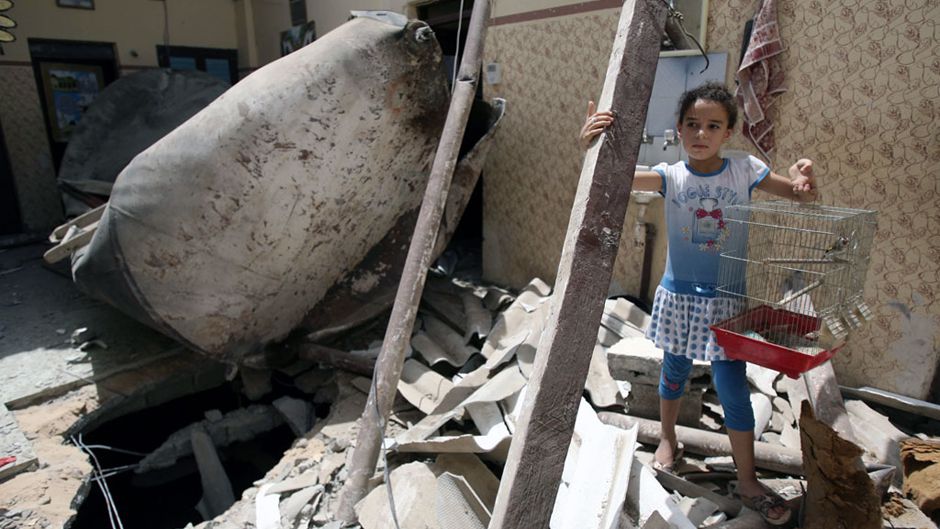 She also called for an end to the culture of impunity and underscored that credible allegations of war crimes and crimes against humanity from earlier escalations of hostilities in Gaza must be properly investigated as “so far, they have not been”.

Noting that Secretary-General Ban Ki-moon was currently in the region hoping to bolster support for a ceasefire, Ms. Pillay said she hoped that the parties will respond positively, but cautioned that a lasting peace can only begin with respect for human rights and human dignity, and in the full realization of the right to self-determination.

“More powerful entities, such as the Security Council, and individual States with serious leverage over the parties to this dreadful and interminable conflict, must do far more than they have done so far to bring this conflict to an end once and for all,” she urged.

The Human Rights Commissioner had also reiterated her calls for the blockade on Gaza to be lifted. The blockade, which has destroyed the area’s economy, has resulted in high unemployment rates and a growing dependence on international aid.

The latest round of conflict has disrupted water and sanitation services, as well as electricity, including the Gaza Power Plant which was shut down yesterday.

The Council also heard from Makarim Wibisono, the Special Rapporteur for the situation of human rights in the Occupied Palestinian Territory, who spoke on behalf of the Coordination Committee of the Special Procedures of the Human Rights Council.

He noted that in addition to killing people, the fighting had destroyed homes leaving several thousand families homeless. At the same time, Mr. Wibisono stressed that the right of the Palestinian people to resist occupation could not justify the launching of thousands of rockets and mortars directed against Israeli civilians. 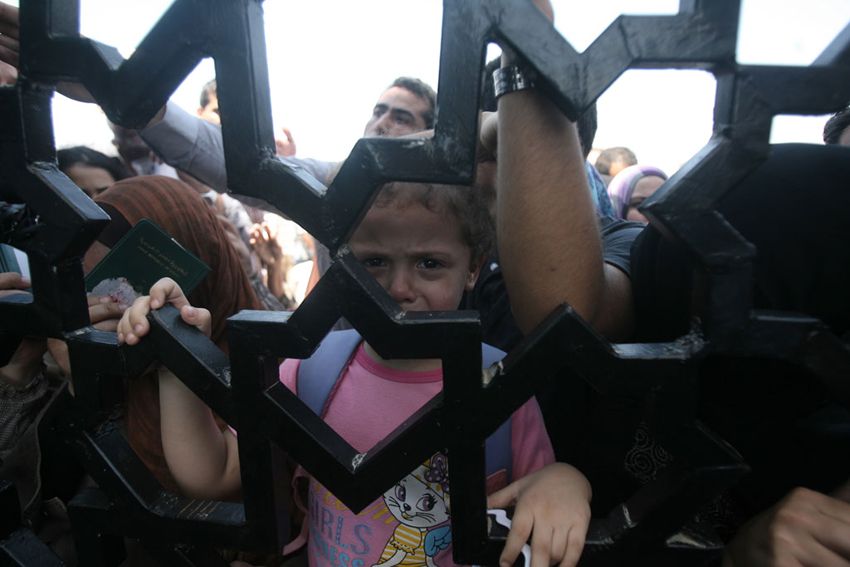 A young girl waiting to cross into Egypt with her family cries at the Rafah Border Crossing in southern Gaza. Egypt has opened the crossing to allow injured Palestinians to receive treatment. Photo: UNICEF/NYHQ2014-0902/El Baba.

At least 2,000 rockets and mortars have reportedly been fired towards Israel since earlier this month, according to the Office for the Coordination of Humanitarian Affairs (OCHA).

Meanwhile, over 2,900 targets in Palestine were struck during the same period, the UN agency confirmed.
The fighting has forced approximately 118,000 Palestinians to seek refuge in 77 schools run by the UN Relief and Works Agency for Palestine Refugees in the Near East, UNRWA’s Director of Legal Affairs, Lance Bartholomeusz, told the Council.

This figure is about 6 per cent of Gaza’s population, and double the peak in UNRWA shelters during the 2008 to 2009 conflict, Mr. Bartholomeusz said.

Civilians in Gaza have no safe place to go with 44 percent of the land declared a ‘no-go zone’ by the Israeli army, according to OCHA.

The UNRWA facilities are not immune to destruction. At least 18 medical facilities, include five UNRWA health clinics have been hit by airstrikes and shelling. In addition, at least one school was hit on Monday alone, then a second time on Tuesday when UN humanitarian workers went to survey the damage.

The UN agency is appealing for $115 million and humanitarian agencies are expected to issue a full Flash Appeal in the coming days, Ms. Kagan said.