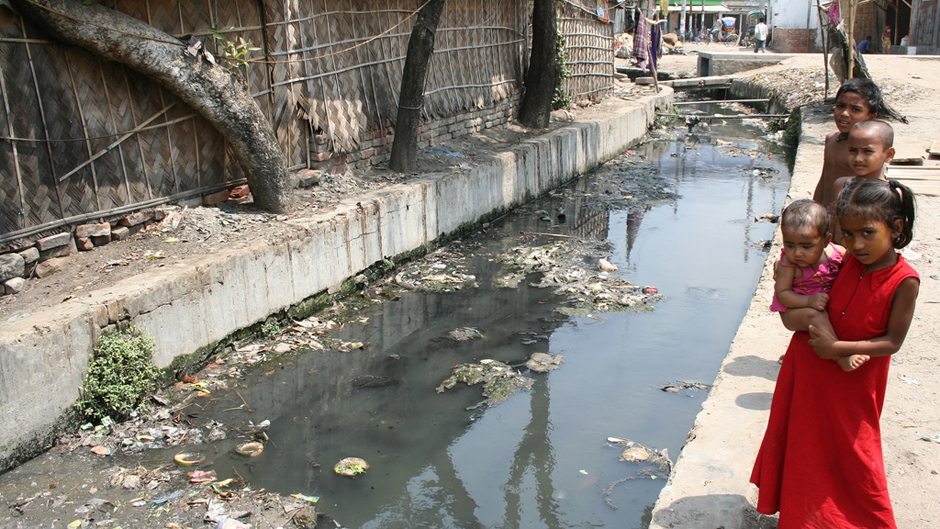 At the height of his election campaign last October, Narendra Modi, India’s Hindu nationalist leader, briefly set aside his spiritual aspirations when he told a surprised audience that economic development should take precedence over religion.

“Toilets before temples,” pleaded Modi, the newly-elected prime minister of India, a country which has been in the throes of a perpetual sanitation crisis, and where open defecation is an all-too-common sight in villages and urban slums.

As chief minister of the state of Gujarat, Modi oversaw the installation of some 76,000 lavatories in schools “so that more girls could study,” according to an article in the Economist last month.

As if taking its cue from Modi, or by happy coincidence, the United Nations Wednesday formally launched a global campaign to help improve access to toilets for the 2.5 billion people without basic level sanitation.

“It is time to talk about open defecation,” said UN Deputy Secretary-General Jan Eliasson, “and to discuss the facts, the consequences and the solutions.”

And it is time to talk about the many countries around the world where community members, local leaders and politicians are taking positive action to end this practice, he added.

By 2025, the practice of open defecation must be totally eliminated, the United Nations has vowed.

Barbara Frost, chief executive at the London-based WaterAid, told IPS South Asia still has the most people without basic sanitation, more than one billion in 2012, although sub-Saharan Africa also has a large number, just fewer than 644 million.

“The situation by sheer numbers is most difficult in India where there are nearly 800 million people without basic sanitation, and 600 million of those are still practising open defecation,” she said.

In sub-Saharan Africa, Nigeria is bucking the trend and has seen large increases in open defecation between 2000 and 2012.

“Many African nations are seeing the number of people without basic sanitation drop, but in Nigeria this is increasing,” Frost said.

“People who do not have access to a hygienic toilet and a place to wash their hands are exposed to an array of faecally transmissible and potentially deadly diseases that with improved sanitation are easily preventable,” he said. “That is why we have to make equitable access to improved sanitation a key priority in the post-2015 development agenda,” Williams added.

He also said sanitation and hygiene are motors which drive health, and social and economic development around the world.

“An environment that lacks sanitation and clean water is an environment where achieving other development goals is an impossible dream,” declared Williams.

For example, without proper toilet facilities, women and girls constantly risk rape and sexual assault while defecating in the open, and pubescent girls drop out of school because of the lack of privacy, he said.

Accordingly, for its commemoration of World Toilet Day this year, Singapore is planning an event focusing on the unique and particular challenges of open defecation for women and girls.

“There are taboos within taboos, so we want to focus on the unique vulnerabilities of women without access to basic sanitation and toilets,” he added.

Neo said the UN’s Millennium Development Goal (MDG) target of providing basic sanitation is lagging behind other MDGs and is unlikely to be achieved by 2015.

Therefore, it is critical that sanitation remains prominent in the post-2015 development agenda both as a stand-alone goal and mainstreamed into other goals under the agenda.

The UN’s campaign against open defecation will run through the end of 2015.

Mother, an independent advertising agency in the United Kingdom, has given time and expertise on a pro bono basis to develop campaign ideas and materials, according to the United Nations. 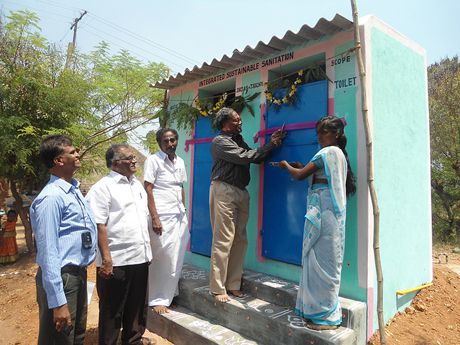 Opening of a new toilet system (India’s first) that is a model of an Integrated Sustainable Sanitation structure, wherein a Urine Diversion Dehydration (UDD) toilet is attached to a biogas plant. The way it works is urine is collected and stored in separate chamber; wash water from toilet is collected separately and allowed to fall through a grey water filtering chamber; excreta is channelled into the biogas tank; the filtered grey water flows into urine chamber, dilutes the urine and passes into kitchen garden (undiluted urine should not be applied to plants); and finally, slurry is allowed to fall in two dry-bed chambers and over a period of time (6-8 months), slurry becomes manure and can be applied over crops for yielding more production. Photo: Water Dot Org. Creative Commons BY-NC-SA (cropped).

Where there is open defecation, pathogens spread quickly, causing diarrhoea, cholera, bilharzia (caused by freshwater worms) and other diseases, according to WaterAid.

More than 1,400 children die each day of diarrhoeal diseases linked to a lack of safe water, basic sanitation and good hygiene.

Williams told IPS the sanitation movement supports millions each year to build a toilet for their household, assisted by programmes such as the WSSCC’s Global Sanitation Fund and development partners such as the World Bank and the UN children’s agency UNICEF.

“Together we are helping rural communities to stop open defecation and wash their hands of disease spread by poor sanitation once and for all.”

Between 1990 and 2012, open defecation decreased from 24 percent to 14 percent globally. South Asia saw the largest decline from 65 percent to 38 percent, according to WSSCC.

But there are stark disparities across regions, between urban and rural areas, and between the rich and the poor and marginalized.

The vast majority of those without sanitation are poorer people living in rural areas. Yet, progress on sanitation has often increased inequality by primarily benefiting wealthier people, according to WSSCC.

The GSF has committed 86 million dollars in 11 country programmes worldwide, according to WSSCC.