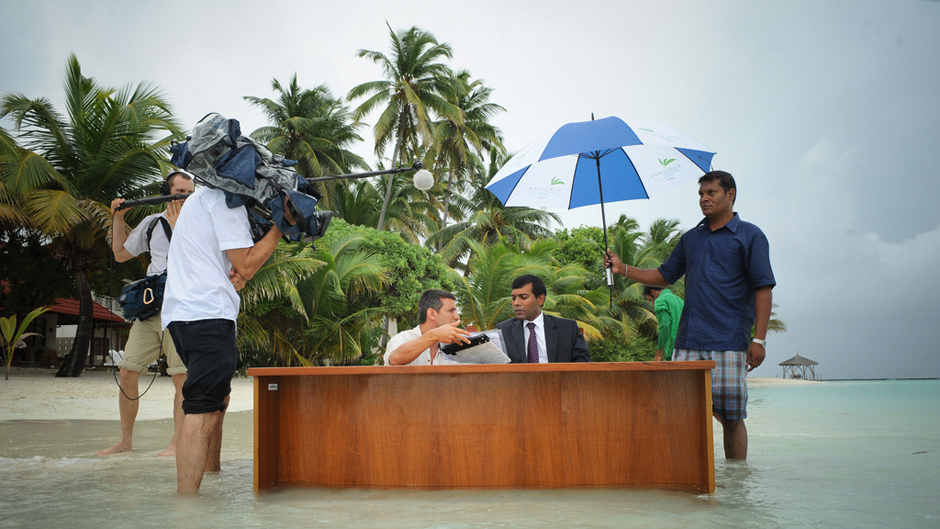 The climate debate tends to take place over the heads of ordinary people. Consequently people from island communities may end up being defined as “climate refugees” without even knowing it. A group of researchers travel to the Indian Ocean to hear the islanders’ side of the story.

The populations of small tropical islands are particularly vulnerable to climate change. Over the past decade, a number of media outlets and organizations have presented various figures showing that rising sea levels or changing weather conditions will force millions of people in low-lying areas and small island states to migrate.

Research Associate Himani Upadhyay of The Energy and Resources Institute in India is sceptical of such calculations.

“There are so many figures circulating which speculate [on] the number of future climate refugees, without giving due attention to understanding the term climate refugee,” says Upadhyay.

She explains that these estimates often originate from computer models that ignore the complexities on the ground.

“Some of these figures are a result of someone running a climate change impact model, showing, for example, the expected sea level rise for this century, drawing a line across the areas affected, running a population growth model for the period and assuming that they have to move. But the situation is not really as simple as this,” says Upadhyay.

Indeed, many are calling for a new narrative that is more comprehensive and respects the dignity of those affected.

Himani Upadhyay co-leads the Center for International Climate and Environmental Research (CICERO) research project “Perceptions and Understandings of Climate Change: Lakshadweep and the Maldives”. The aim of the project is to investigate islanders’ perceptions of how they are being affected by climate change, how they see their future and what it would take to make them leave their homes. 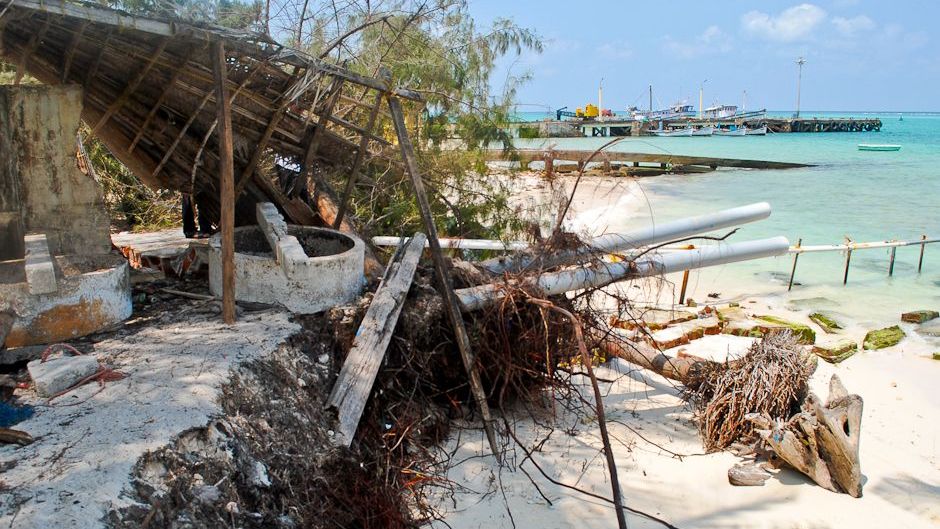 Erosion. The local fishermen in Lakshadweep experience changes in their local environment, but how do they interpret these changes? Photo: Abdul Jaffar / © TERI

The researchers are interviewing inhabitants of four communities in the Indian archipelago Lakshadweep (off the west coast of mainland India) and on two islands in the Republic of Maldives as well as policymakers in the countries’ capitals, New Delhi and Malé, to find out whether their perceptions of the situation are different.

Senior Research Fellow Ilan Kelman of CICERO, the project co-leader, explains why it is important to know about islanders’ perceptions of climate change:

“Much of the research on climate change and the resulting policies have a clearly top-down approach; authorities, researchers and organizations make decisions or assumptions on behalf of people who are not always given the opportunity to present their own views,” says Kelman.

[quote quote=”We must look at migration in a wider perspective, and consider whether climate change is actually the driver for migration in a particular context.” author=”Researcher Himani Upadhyay” type=”text” ]

And when people do not have the chance to explain how they feel about the matter, the nuances and complexities of the situation disappear, warns Himani Upadhyay:

Of course, this does not deny that global climate change is taking place, but the impacts vary from place to place and different groups of people affected may perceive and respond to the situation differently.

“Earlier tuna was plentiful, but now we have to travel long distances to find substantial catch. All this is happening due to degradation of the corals,” reports a local fisherman in Lakshadweep.

The language of power

Any individual who migrates has their own reasons for doing so, but this does not mean that they necessarily have the power to define their own situation. Uma Kothari, Professor of Migration and Postcolonial Studies at the University of Manchester, is interested in the underlying power relations that shape the form and extent of people’s choices and decisions. She explores who influences the global debate on climate change, who we listen to, and on whose knowledge we base our decisions. 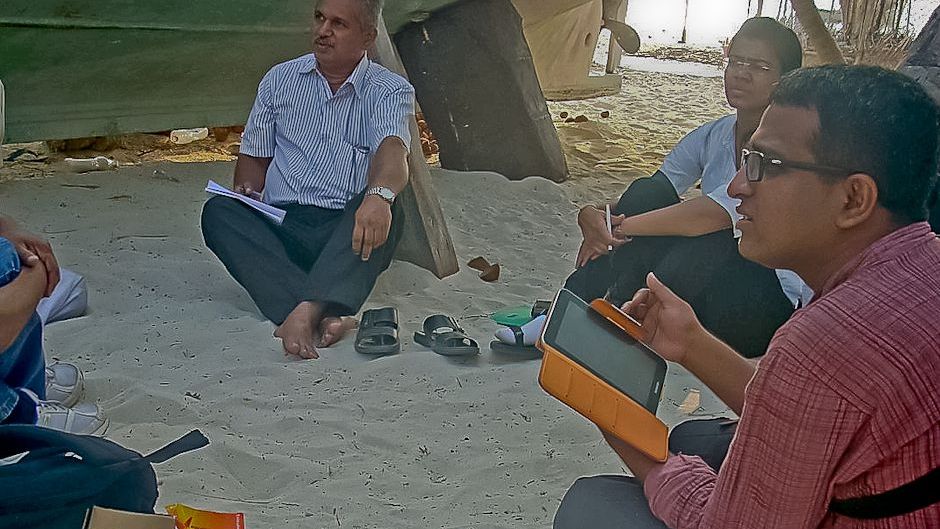 On the ground. A team from The Energy and Resources Institute in India during fieldwork in Lakshadweep. Photo: © TERI

Kothari is involved in carrying out research in the Maldives, interviewing policymakers, NGO personnel as well as people in island communities. One of the issues she will be exploring is how different groups of people variously interpret and understand the term “climate change” and what its effects may be on population mobility. She is concerned that as expertise is increasingly institutionalized, technicalized and formalized, it privileges certain kinds of people, while ignoring others.

“It is not always important what you know, but who you are,” says Professor Kothari.

[quote quote=”Indeed, if you cannot speak in the scientific languages of much climate change discourse, you are often marginalised from these debates.” author=”Professor Uma Kothari” type=”text” ]

Thus, a so-called ‘expert’ is not necessarily someone who has extensive knowledge of a particular issue, but is seen as such because of where they come from, their status, position and ability to use particular language.

“Indeed, if you cannot speak in the scientific languages of much climate change discourse, you are often marginalised from these debates and as a result decisions may be made that are not necessarily in the interest of those most affected,” says Professor Kothari.

When you are marginalized, when your voice is not heard, that is when others begin making assumptions on your behalf. And that is when you for instance may end up being classified as a “climate refugee” without even knowing it.

The way a problem is perceived and interpreted determines how it is addressed and how decisions and interventions are justified. Maldivian domestic policy is a case in point:

“While the government of the Maldives may encourage the consolidation of the population onto a few larger islands in order to make them more resilient to future climate change, population consolidation will also reduce the costs of the provision of services to large numbers of islands,” explains Professor Kothari.

The question is therefore whether this population should be seen primarily as being displaced by climate change or as being moved for economic and practical reasons — and who decides how their displacement is to be interpreted, both domestically and internationally?

This is why this project seeks to find out more about how people are thinking about climate change and migration, and how the relationship between the two is perceived; in remote rural areas, as well as in the air conditioned offices of decision makers.

Very often when the focus is shifted from computer screens and satellite images to specific lagoons and fishing banks, new priorities and perspectives emerge. These perspectives may make the story of the “climate refugee” both more complicated and more difficult, but not necessarily any less true.

Understanding the islanders: Climate migration in context by Eilif Ursin Reed is licensed under a Creative Commons Attribution-NonCommercial-ShareAlike 3.0 Unported License.