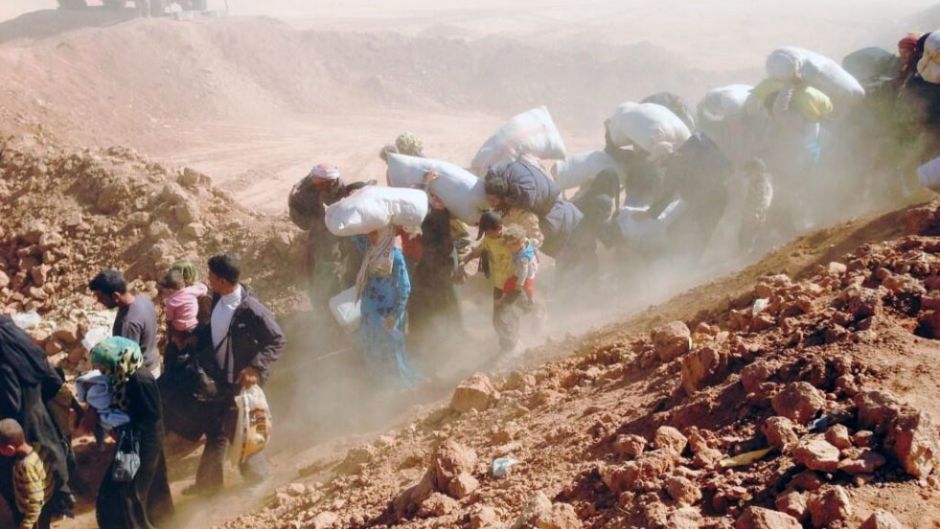 With war raging across large parts of the Middle East and Africa as well as elsewhere, around 5.5 million people were forcibly displaced during the first six months of 2014. According to the UN refugee agency’s (UNHCR) new Mid-Year Trends 2014 report, 1.4 million of these newly uprooted people fled across international borders, thus becoming refugees, while the rest were displaced within their own countries.

That 5.5 million, when added to existing displaced populations and taking into account data revisions, voluntary returns and resettlement, brings the total number of people being helped by UNHCR to 46.3 million as of mid-2014. That is some 3.4 million more than at the end of 2013 and a new record high

Among the report’s main findings are that Syrians, for the first time, have become the largest refugee population under the refugee agency’s mandate (Palestinians in the Middle East fall under the care of UNHCR’s sister-organization UNRWA), overtaking Afghans, who had held that position for more than three decades. At more than 3 million as of June 2014, Syrian refugees now account for 23 percent of all refugees being helped by UNHCR worldwide.

“During the first half of 2014, conflict continued to result in the displacement of millions of refugees and internally displaced persons (IDPs) globally causing significant changes in the trends and number of refugees, asylum-seekers, IDPs and others of concern to UNHCR. In this context, management of humanitarian crises is increasingly complex, including with regard to the production of timely and comprehensive statistics.” — Mid-Year Trends 2014 report.

Despite dropping to second place, the 2.7 million Afghan refugees worldwide remain the largest protracted refugee population under UNHCR care. The agency defines a “protracted refugee situation” as one that has existed for at least five years. After Syria and Afghanistan, the leading countries of origin of refugees are Somalia (1.1 million), Sudan (670,000), South Sudan (509,000), the Democratic Republic of the Congo (493,000), Myanmar (480,000) and Iraq (426,000). 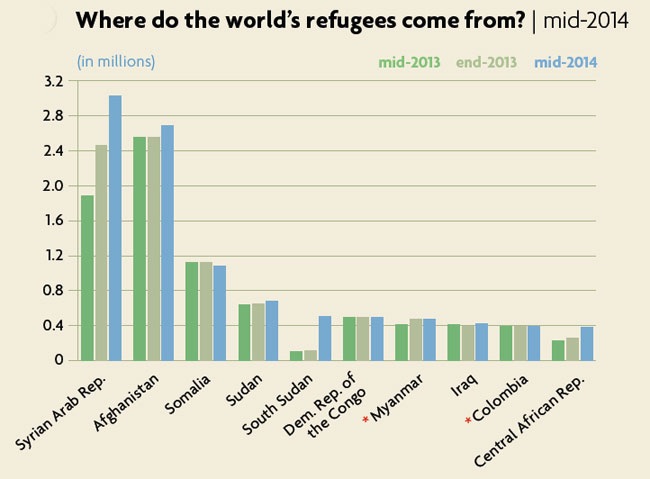 In all, the number of refugees under UNHCR’s mandate reached 13 million by mid-year, the highest since 1996, while the total number of internally displaced people protected or assisted by the agency reached a new high of 26 million. As UNHCR only provides help for IDPs in countries where governments request its involvement, this figure does not include all internally displaced people worldwide.

“In 2014 we have seen the number of people under our care grow to unprecedented levels. As long as the international community continues to fail to find political solutions to existing conflicts and to prevent new ones from starting, we will continue to have to deal with the dramatic humanitarian consequences,” said UN High Commissioner for Refugees António Guterres.

“The economic, social and human cost of caring for refugees and the internally displaced is being borne mostly by poor communities, those who are least able to afford it. Enhanced international solidarity is a must if we want to avoid the risk of more and more vulnerable people being left without proper support.”

UNHCR’s Mid-Year Trends 2014 report is based on data from governments and the organization’s worldwide offices. As information available to UNHCR at this point in the year is incomplete, the report does not show total forced displacement globally. Those figures are presented in June each year in UNHCR’s annual Global Trends report, which as of end 2013 showed that 51.2 million people were forcibly displaced worldwide. Nonetheless, the mid-year data is a major component of the global total and an important indicator of worldwide refugee and internally displaced persons trends.