US Urgently Needs Truth and Reconciliation on Violence Against African Americans 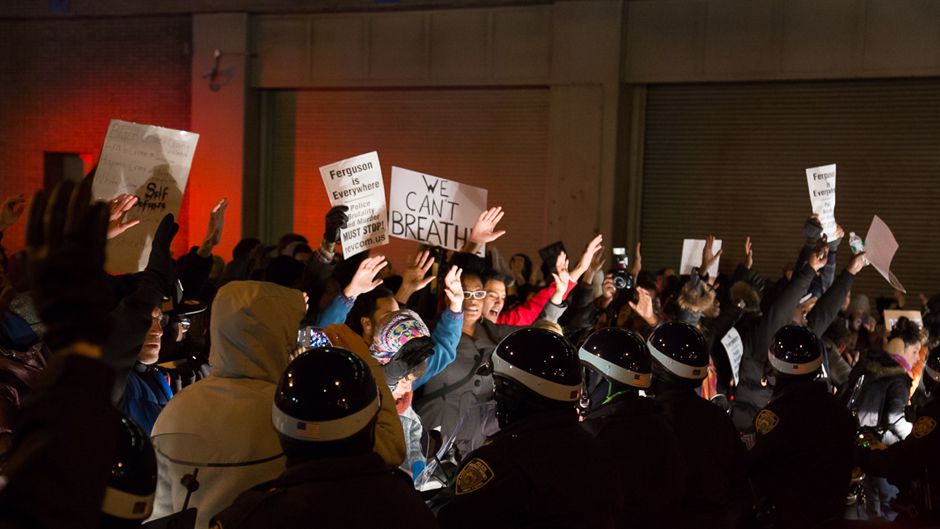 I am among the millions who have experienced the shock, grief, and fury of losing someone to racial violence.

When I was 15, two close friends were killed in the Birmingham Sunday School bombing carried out by white supremacists trying to terrorize the rising civil rights movement. Only six years later, my husband was shot and nearly killed by police who broke into our home, all because of our activism at the time, especially in support of the Black Panthers.

As a civil rights trial lawyer, I’ve spent much of my professional life protecting people from racial discrimination. In my early twenties, I devoted myself to organizing an international movement to defend my sister, Angela Davis, from politically motivated capital murder charges aimed at silencing her calls for racial and social justice. Early childhood experiences in the South set me on a quest for social transformation, and I’ve been a community organizer ever since, from the civil rights to the black power, women’s, anti-racial violence, peace, anti-apartheid, anti-imperialist, economic justice, political prisoner movements, and others.

After more than three decades of all the fighting, I started to feel out of balance and intuitively knew I needed more healing energies in my life. I ended up enrolling in a Ph.D. program in Indigenous Studies that allowed me to study with African healers.

Today, my focus is on restorative justice, which I believe offers a way for us to collectively face this epidemic, expose its deep historical roots, and stop it.

The killings of Michael Brown in Ferguson and Eric Garner in New York have sparked a national outcry to end the epidemic killings of black men. Many note that even if indictments had been handed down, that wouldn’t have been enough to stop the carnage. The problem goes far beyond the actions of any police officer or department. The problem is hundreds of years old, and it is one we must take on as a nation. Truth and reconciliation processes offer the greatest hope.

Truth and reconciliation in Ferguson and beyond

A Ferguson Truth and Reconciliation process based on restorative justice (RJ) principles could not only stop the epidemic but also allow us as a nation to take a first “step on the road to reconciliation,” to borrow a phrase from the South African experience.

A restorative justice model means that youth, families, and communities directly affected by the killings—along with allies—would partner with the federal government to establish a commission. Imagine a commission that serves as a facilitator, community organizer, or Council of Elders to catalyse, guide, and support participatory, inclusive, and community-based processes.

We know from experience that a quasi-legal body of high-level experts who hold hearings, examine the evidence, and prepare findings and recommendations telling us as a nation what we need to do won’t work. We’ve had plenty of those.

Changing form but not essence over four centuries, this history has morphed from slavery to… deadly police practices.

To move toward a reconciled America, we have to do the work ourselves. Reconciliation is an ongoing and collective process. We must roll up our sleeves and do the messy, challenging, but hopeful work of creating transformed relationships and structures leading us into new futures. Someone like Archbishop Desmond Tutu, who headed up South Africa’s Truth and Reconciliation Commission, might come to Ferguson to inspire and guide us as we take the first steps on this journey.

And the impact wouldn’t be for Ferguson alone. Unfolding in hubs across the nation, a Truth and Reconciliation process could create safe public spaces for youth, families, neighbours, witnesses, and other survivors to share their stories.  Though this will happen in hubs, the truths learned and the knowledge gained would be broadly shared. Importantly, the process would also create skillfully facilitated dialogue where responsible parties engage in public truth-telling and take responsibility for wrongdoing.

Getting to the roots

Today, teenagers of colour are coming of age in a culture that criminalizes and demonises them, and all too often takes their lives.

I work with youth in Oakland, where it’s gut-wrenching to see the trauma and devastation up close. Black youth in the US are fatally shot by police at 21 times the rate of white youth. Children of colour are pushed through pipelines to prison instead of being put on pathways to opportunity. Some make it through this soul-crushing gauntlet against all odds. But too many do not.

Defining how long- and far-reaching a process like this would be is difficult because, sadly, the killing of Mike Brown is only one instance in a long and cyclical history of countless unhealed racial traumas that reaches all the way back to the birth of this nation. Changing form but not essence over four centuries, this history has morphed from slavery to the Black Codes, peonage and lynching, from Jim Crow to convict leasing, to mass incarceration and deadly police practices.

This is urgent. Continued failure to deal with our country’s race-based historical traumas dooms us to perpetually re-enact them.

Bearing in mind its expansive historical context, the Truth and Reconciliation process would set us on a collective search for shared truths about the nature, extent, causes, and consequences of extrajudicial killings of black youth, say, for the last two decades. Through the process, those truths will be told, understood, and made known far and wide. Its task would also include facing and beginning to heal the massive historical harms that threaten us all as a nation but take the lives of black and brown children especially. We would utilize the latest insights and methodologies from the field of trauma healing.

This is urgent. Continued failure to deal with our country’s race-based historical traumas dooms us to perpetually re-enact them.

Though national in scope, the inquiry would zero in on the city of Ferguson and several other key cities across the country that have been the site of extrajudicial killings during the last decade. Specifics like this are best left to a collaborative, inclusive, and community-based planning process.

The process will create public spaces where we face together the epidemic of killings and its root causes, identify the needs and responsibilities of those affected, and also figure out what to do as a nation to heal harms and restore relationships and institutions to forge a new future.

There are precedents for this approach: Some 40 Truth and Reconciliation Commissions have been launched worldwide to transform historical and mass social harms such as those we are facing. Their experiences could help light a way forward.

With near-constant live coverage by national television networks, the attention of the nation was riveted on the process. Although South Africa’s Truth and Reconciliation Commission was far from perfect, it is internationally hailed for exposing apartheid’s atrocities and evoking a spirit of reconciliation that helped the country transcend decades of racial hatred and violence.

There are North American examples as well, including the 2004 Greensboro Truth and Reconciliation Commission in North Carolina, the first in the United States. This effort focused on the “Greensboro massacre” of anti-racist activists by the Ku Klux Klan in 1979.

In 2012, Maine’s governor and indigenous tribal chiefs established a truth commission to address the harms resulting from the forced assimilation of Native children by Maine’s child welfare system. It is still in operation.

And Canada’s Truth and Reconciliation Commission, also still functioning, addresses legacies of Indian residential schools that forcibly removed Aboriginal children from their homes, punished them for honouring their language and traditions, and subjected them to physical and sexual abuse.

Get to the truth, get to healing

Like South Africa’s and others, the Ferguson Truth and Reconciliation process would draw on the principles of restorative justice. Rooted in indigenous teachings, for some 40 years the international RJ movement has been creating safe spaces for encounters between persons harmed and persons responsible for harm, including their families and communities. These encounters encourage participants to get to truth, address needs, responsibilities, and root causes, make amends, and forge different futures through restored relationships based upon mutual respect and recognition.

Restorative justice is founded on a worldview that affirms our participation in a vast web of interrelatedness. It sees crimes as acts that rupture the web, damaging the relationship not only between the individuals directly involved but also vibrating out to injure relationships with families and communities. The purpose of RJ is to repair the harm caused to the whole of the web, restoring relationships to move into a brighter future.

Applied to schools, communities, the justice system, and to redress mass social harm and create new futures, restorative justice is increasingly being recognized internationally. In Oakland, California, where I co-founded and direct Restorative Justice for Oakland Youth (RJOY), school-based programs are eliminating violence, reducing racial disparity in discipline, slashing suspension rates, dramatically boosting academic outcomes, and creating pathways to opportunity instead of pipelines to incarceration. These outcomes are documented in a 2010 study by UC Berkeley Law School and a soon-to-be-released report by the school district. Oakland’s RJ youth diversion pilot is interrupting racialized mass incarceration strategies and reducing recidivism rates to 15 percent. (Based on discussions with folks who run the program — no studies as yet.)

Police and probation officers are being trained in RJ principles and practices. Youth and police are sitting together in healing circles, and creating new relationships based on increased trust and a mutual recognition of one another’s humanity.

It’s impossible to predict whether similar outcomes would emerge from a Truth and Reconciliation process in Ferguson — and the United States. But it’s our best chance. And, if history is any guide, it could result in restitution to those harmed, memorials to the fallen, including films, statues, museums, street renamings, public art, or theatrical re-enactments. It might also engender calls to use restorative and other practices to stop violence and interrupt the school-to-prison pipeline and mass incarceration strategies. New curricula could emerge that teach both about historic injustices and movements resisting those injustices. Teach-ins, police trainings, restorative policing practices, and police review commissions are also among the universe of possibilities.

In the face of the immense terrain to be covered on the journey toward a more reconciled America, no single process will be enough. However, a Ferguson Truth and Reconciliation process could be a first step towards reconciliation. It could put us on the path of a new future based on more equitable structures and with relationships founded on mutual recognition and respect. It could also serve as a prototype to guide future truth and reconciliation efforts addressing related epidemics such as domestic violence, poverty, the school-to-prison pipeline, and mass incarceration. A Ferguson Truth and Reconciliation Commission could light the way into a new future.

This article first appeared on YES! Magazine, a national, nonprofit media organization in the United States that fuses powerful ideas and practical actions.

US Urgently Needs Truth and Reconciliation on Violence Against African Americans by Fania Davis is licensed under a Creative Commons Attribution-NonCommercial-ShareAlike 4.0 International License.
Based on a work at YES! Magazine.

Fania Davis is a civil rights attorney and co-founder and executive director of RJOY, Restorative Justice for Oakland Youth. She also has a PhD in Indigenous Studies. She wishes to acknowledge discussions with Professor Jennifer Llewellyn, the Viscount Bennett Professor of Law at Dalhousie University in Nova Scotia, Canada. Professor Llewellyn has worked with the South African and Canadian TRC’s and writes and researches on restorative justice and truth and reconciliation processes.