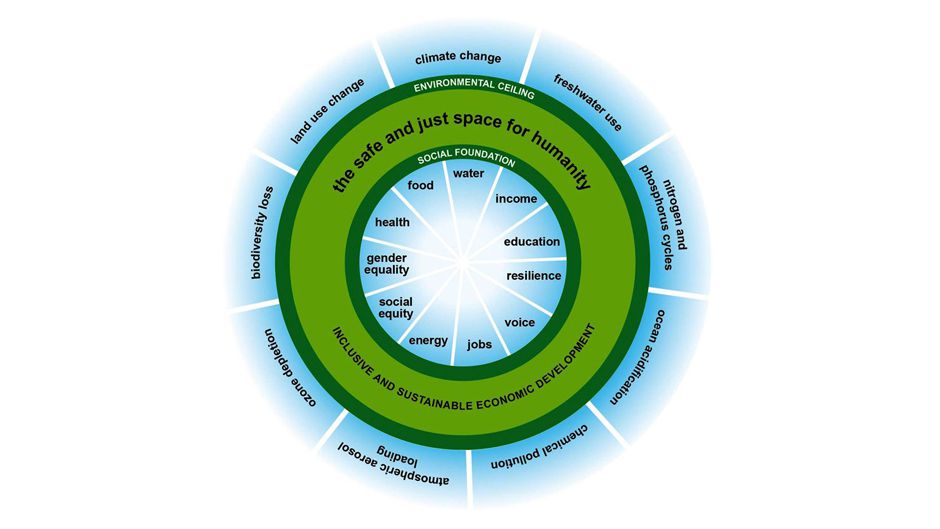 Humanity’s central challenge in the 21st century is to meet the human rights of all people within the capacity of Earth’s life-support systems. In other words, we need to get into the doughnut: the safe and just sweet spot between social and planetary boundaries, as shown above in Fig. 1.

So where are we today? Beyond the boundaries on both sides: we have already transgressed at least three planetary boundaries (on climate change, nitrogen use and biodiversity loss), while over one billion people still lack the means to meet their most essential needs (Fig. 2). 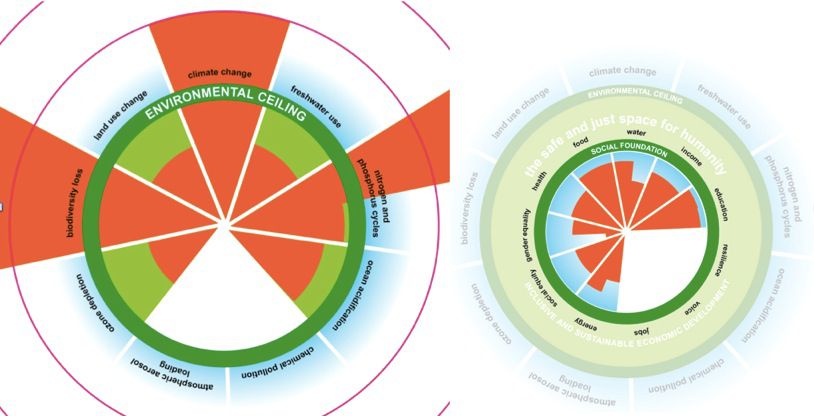 Figure 2: Beyond the boundaries on both sides — over the environmental ceiling (left) and under the social foundation (right).

What will it take to get into the doughnut?

Tackling inequality is key — and that means addressing resource inequalities in both consumption and production. Here’s why, in three messages.

1.  Getting over the social foundation demands redistributing resource consumption towards the worst off. The good news? This need not be a source of pressure on the planet, as shown in Fig. 3. 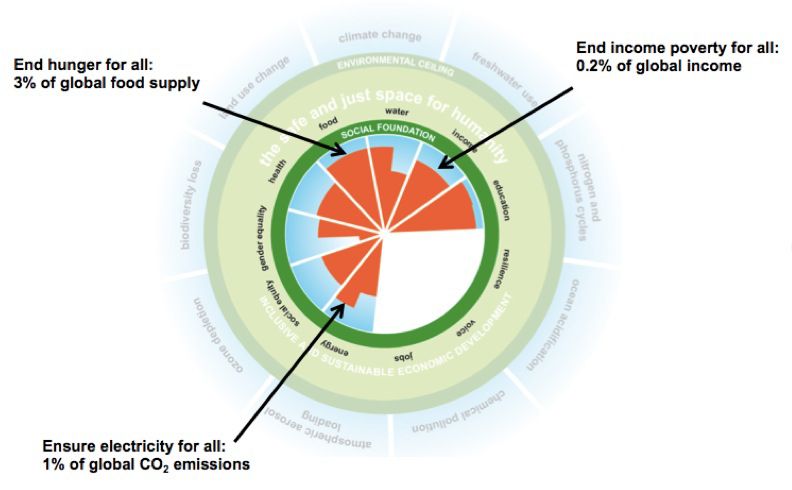 Figure 3: Ending poverty — no pressure on the planet.

2.  Getting back within planetary boundaries calls for reducing total resource consumption, and redistributing it away from the richest.

It’s clear that getting within social and planetary boundaries demands a strong reduction in resource consumption by the richest and a significant (but very feasible) redistribution towards the poorest.

3.  Getting back within planetary boundaries also calls for addressing the unequal distribution of resource use in production processes.

When Rockstrom and co. produced the first analysis of planetary boundaries in 2009, they put forward a single global estimate for each boundary — such as a maximum of 350 parts per million of CO2 in the atmosphere, or 35m tonnes of reactive nitrogen (used widely in fertilizers) to be released into the atmosphere each year.

For some planetary boundaries, the pressure created is ‘well mixed’ meaning that it no matter where it is created, it spreads itself evenly — such as greenhouse gases that add to global warming no matter where they are released from. For these, a single global number for the boundary makes clear sense. Other planetary boundary pressures, such as nitrogen and phosphorus use, are not well-mixed but instead are ‘spatially heterogeneous’ (let’s call them ‘lumpy’) in that the pressure is most intense close to where it was created.

If you want to know what lumpy pressure on planetary boundaries looks like, check out these two maps showing first the global use of nitrogen fertilizers, and then global distribution of eutrophication and hypoxia, due to excessive nitrogen and phosphorus, causing algal blooms which deprive aquatic life of oxygen. It’s clear (Fig. 4a) that nitrogen fertilizer use is very unevenly distributed and excessively intensive in regional hotspots (in red). And these excesses map closely to the coastal areas suffering the most intensive damage (Fig. 4b). 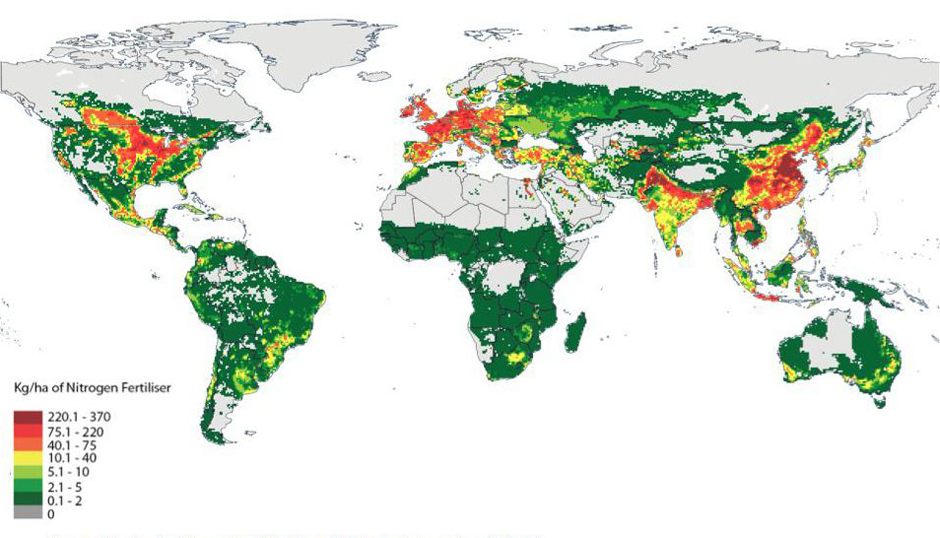 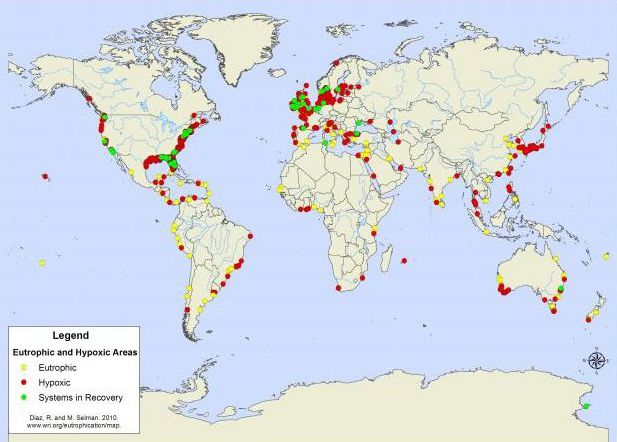 It appears that for nitrogen, and many other ‘lumpy’ planetary boundary pressures — such as phosphorus use, land use change, biodiversity loss, chemical pollution and water withdrawals — the global distribution of pressure matters, as well as the total. More evenly distributed pressure may reduce total pressure at the global scale — as well as reducing the risk of local ecosystem collapse. Indeed, two Earth-system scientists, Will Steffen and Mark Stafford Smith pointed out in a 2013 paper that this means, “It may well be in the self-interest of wealthy nations to achieve a more spatially equitable world in terms of access to resources and ecosystem services.”

What’s more, when the next iteration of the planetary boundaries framework is published (hopefully not long to wait…), it will propose not only global boundary levels but regional ones too, so bringing more attention to the overall distribution of humanity’s pressure on the planet.

From these three perspectives, one thing is clear. We cannot get into the doughnut’s safe and just space without tackling the distribution of global resource use in both consumption and production. Put simply, if we want to get into the doughnut, then we’ve got to tackle inequality.

All data and references (unless otherwise provided here) can be found in Raworth, K. (2012) A safe and just space for humanity: can we live within the doughnut?

Want to Get into the Doughnut? Tackle Inequality by Kate Raworth is licensed under a Creative Commons Attribution-NonCommercial-ShareAlike 4.0 International License.
Permissions beyond the scope of this license may be available at Kate Raworth.

Kate Raworth is a Senior Visiting Research Associate at Oxford University’s Environmental Change Institute, a Senior Associate of the Cambridge Institute for Sustainability Leadership and a member of the Club of Rome. She was Senior Researcher at Oxfam from 2002 to 2013. Prior to that she was economist and co-author of UNDP’s Human Development Report from 1997-2001, contributing chapters on globalization, new technologies, resource consumption and human rights. From 1994-97 she was a Fellow of the Overseas Development Institute, based in Zanzibar, focused on promoting micro-enterprise development in the islands. Raworth is currently writing a book, Doughnut Economics: seven ways to think like a 21st century economist, to be published by Random House in Spring 2016. The Guardian has named her as “one of the top ten tweeters on economic transformation”.