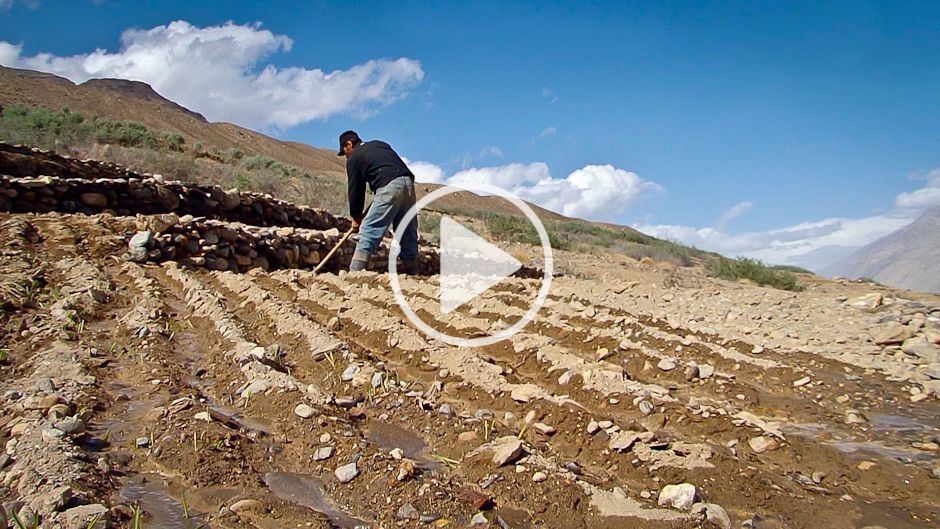 As a rugged branch of the fabled Silk Road, the Wakhan Valley in the Pamir Mountains has long existed at the intersection of routes that once served nomads, peddlers and pilgrims. This slice of Central Asia hosts rich biodiversity and remote societies that are dependent upon the mountainous environment.

Forming a considerable part of the Afghanistan–Tajikistan border in the Western Pamirs is the Panj River, which receives the flows of other rivers that are fed from snow-capped mountains. And on this river, in the Lower Wakhan Valley, lies the Tajik town of Ishkashim, known for its colourful transboundary market shown in the video brief accompanying this article.

Most of Ishkashim’s residents are dependent on subsistence farming. Although thinly populated with only 7.6 persons per square kilometre, the scarce land resources of the Western Pamirs are under high pressure. The landscape is semi-arid due to the high altitude and scarce rain. Agricultural land is limited, so some villagers have taken to cultivating hillsides where the soil is susceptible to erosion.

Water is nonetheless plentiful. The mighty Panj and a basic canal system, constructed over time, mean this town has long been a green oasis of cropland and orchards in the midst of the dry mountains that surround it.

Today it is nonetheless a challenge for the people who live here to bring this water to the fields where it is needed, because the irrigation infrastructure they depend upon urgently needs repair.

As shown in the video, access to water has become a serious problem. Farmer Anvar Alidodov explains how the dyke of the main canal — built many decades ago when Tajikistan was part of the Soviet Union — was washed away.

“Over the years, because of the great flow of water, the cement became weak and collapsed. It was clear to people here that we had to fix it. Otherwise we would lose our lands.

“If there was no water, there would be real poverty amongst the people of the village,” Alidodov states simply. He and the other farmers nonetheless lacked the resources and coordination to fix the canal.

So, as the years passed, land productivity dropped due to both the erosion challenges and irrigation difficulties, and threatened the people’s already lean livelihoods.

As explained in the video, this is where a team from the High-Pamir and Pamir-Alai Sustainable Land Management (PALM) project was able to contribute. PALM is an integrated, transboundary initiative of the Kyrgyzstan and Tajikistan governments that provides technical and financial support via sub-district units (made up of international agencies and Tajik partners, local officials, NGOs and farmers) that address local ecosystem degradation and rural poverty with innovative field level sustainable land management practices and related micro-projects.

Working with farmers in this way is intended to bring about bottom-up change in pilot communities that can then be replicated in other villages, explains Nevelina Pachova of the Environmental Vulnerability and Ecosystem Services section at the United Nations University Institute for Environment and Human Security, one of PALM’s project partners.

Indeed, as the video shows, with the research and support provided, Ishkashim’s farmers are trying out new crops, irrigation techniques and land use approaches (like reviving traditional terracing) to help them improve the productivity of their land.

“Everybody wants to cultivate their land,” says Alidodov. “Fortunately, for now, this problem has been fully solved here.”

“There is a proverb among people that says that ‘water is the source of life’. This is absolutely true because the life of people is connected to water. The villagers get their food from these lands.”

Water and sustainable land use in the Wakhan Valley by Carol Smith is licensed under a Creative Commons Attribution-NoDerivs 3.0 Unported License.