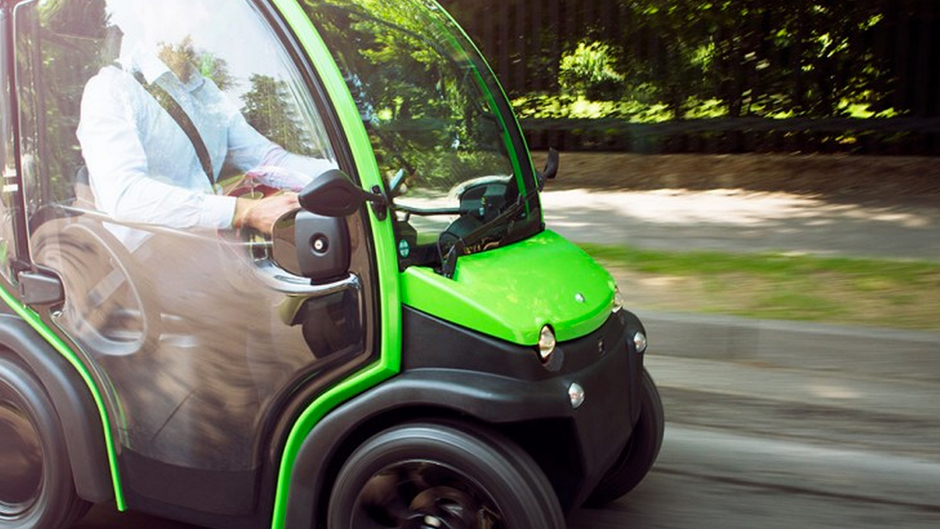 While on my last summer holiday, I was surprised to come across an old friend parked on a side street in Florence, Italy, near the Basilica of Santa Maria del Fiore (Il Duomo). It was the Girasole Elettrica (Electric Sunflower), a small electric car about which we featured a story back in October 2008. I had to take a photo.

When we wrote that article about former Japanese racing driver Yoshio Takaoka, who in 2008 was trying to sell the Girasole Elettrica in his hometown of Kamakura, we did mention the Italian connection. Takaoka was importing the car bodies from Italy’s Start Lab, and then adding his own car battery system. This was big news back in 2007 and 2008, but since then we have heard very little about this wonderful little car. These days, the model of Girasole Elettrica that I discovered in Florence has a sales price of €12,700 (or just over US$17,000).

We ended our 2008 article with the sentence: “Happily, we can expect to see more cars like the Girasole on the streets of our world, and as soon as they hit the road we will be reporting on them.”

But we haven’t really seen a whole lot more cars like Girasole on our streets, especially not here in Japan where we are based. We have seen a few Nissan Leafs, and there are even some taxi firms that are using them. But overall, battery electric cars are rare in Tokyo, but hybrids like the Toyota Prius are everywhere.

During my stay in Florence, I was delighted to come across another electric car, just next to the Piazza della Repubblica. It was a tiny Birò, parked perpendicular to the sidewalk, rather than adjacent to it, because it’s length (174 cm/5.7 feet) roughly equaled other cars’ widths. Described as a “personal commuter” by its manufacturer, Estima, this two-seater fully electric vehicle runs at a maximum speed of 45km/hr and its small size (only 103 cm/3.4 feet wide) makes it perfect for those narrow Italian streets, giving you the possibility of parking almost anywhere (perhaps even between two parked cars). 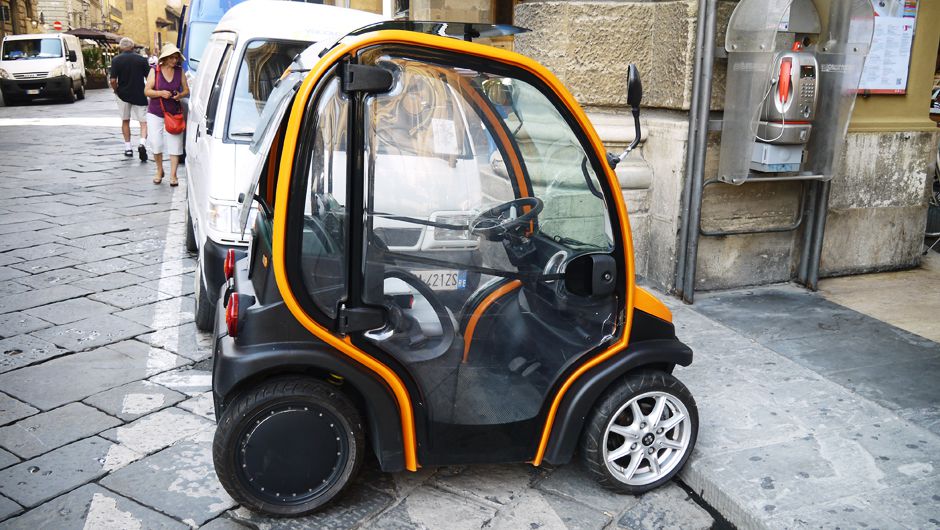 Pollution-free and incredibly quiet, the lack of noise made by the Birò must be a real blessing in Florence where the sound of car traffic kept me awake at night during my stay. But the coolest feature of the Birò is the fact that after parking you can remove the battery, take it indoors and recharge it in the comfort of your home!

You may be wondering why the people of Florence are buying electric cars. Well, one reason is that the central area of the city is a restricted traffic zone where only “bicycles, electric vehicles, motorcycles and scooters are permitted” to enter. Just last year the Mayor of Florence turned in the municipal government’s three “gas guzzler” conventional vehicles and bought a Nissan Leaf electric car (with another hybrid on the way) and further, in a recent survey, 36 percent of Florentines indicated that they would seriously consider buying a hybrid or electric car in the future. In a compact city like Florence, where air and noise pollution are a major concern, this makes perfect sense.

From prototype to mainstream — will it ever happen?

Finding those tiny electric cars in Florence was a real joy. I saw many more but did not take photos of them. It made me wonder: “Will I see a time when electric cars are mainstream?”

Back in 2010, a couple of my colleagues, Sean Wood and Mark Notaras, visited the 41st Tokyo Motor Show and after exploring all the exhibits proclaimed, “The Future is Electric”. We had visited the same motor show in 2008 and 2009 and had noted, with some frustration, that all the electric cars being shown were still prototypes that were not yet on the market.

The International Organization of Motor Vehicle Manufacturers remains dismissive of the notion that electric vehicles could become mainstream, stating that electric vehicles “have useful applications for inner city use because of their zero local emissions, but if the energy to recharge the batteries is generated using fossil fuels, there is no overall environmental advantage. In addition, the limited range provided by even the best current battery technology is a limiting factor in their usefulness for general use.” 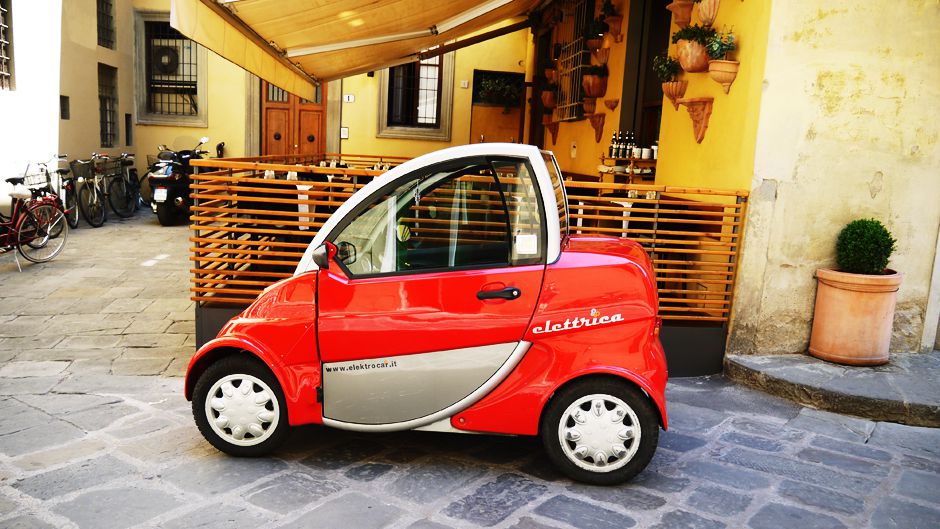 So, is that it? We can only expect limited growth in electric vehicle uptake because of the disadvantages described above. The Global EV Outlook published by the International Energy Agency provides information on the current status of electric car growth and makes projections to 2020. The report shows, for example, that 38 percent of battery electric car sales to date have been in the United States with another 24 percent in Japan. In Europe, the largest proportion of electric vehicle sales are found in France, with 11 percent of the global total. Surprisingly, sales in Italy represent only 0.9 percent and Germany, with its amazing green energy credentials, has only 3.6 percent of the world’s electric vehicle stock. The Germans love speeding along the autobahns in their Audis, Mercedes Benz, BMWs, and Volkswagens, and probably won’t be changing that any time soon.

In recent years China has become the focus of global vehicle production (19 million vehicles produced in 2012) but the battery electric car stock in China in 2012 was only 11,573 (still representing 6.2 percent of the global total).

So, the present is not yet electric — in fact, far from it. But don’t lose hope completely. Global electric vehicle sales more than doubled between 2011 and 2012 and the International Energy Agency (IEA) estimates that by 2020 there could be as many as 20 million electric vehicles on the road. But that is probably going to be out of a total vehicle stock that could exceed 2 billion — definitely a drop in the automotive ocean.

In their 2009 book Two Billion Cars — Driving Toward Sustainability, authors Daniel Sperling and Deborah Gordon argue that our world cannot sustain two billion cars. They state that today’s one billion cars are “already pumping extraordinary quantities of greenhouse gases into the atmosphere, draining the world’s conventional petroleum supplies, inciting political skirmishes over oil, and overwhelming the roads of today’s cities”.

They continue with the claim that “radical changes are called for. Vehicles need to change, as do the energy and transportation systems in which they are embedded. Even according to the most conservative scenarios, dramatic reductions in oil use and carbon emissions will be needed within a few decades to avoid serious economic and climatic damage.”

A more aggressive promotion of electric vehicles is one part of the radical change needed, particularly for urban driving. However, in order to fulfill the potential of EVs, there are many policy, financial, technological and infrastructural limitations that need to be overcome.

Given the choice — and that is no simple matter because car manufacturers still appear wedded to the combustion engine — many more urban consumers would probably switch to electric cars if the price were right and the infrastructure in place.

Perhaps we should reflect upon the wise words of the IEA that state: “Ultimately, a binary judgment of either the success or failure of electrification should not be applied at any one point in time. Rather, as the market continues to progress, its development should be monitored, policy support assessed, and lessons applied.” In other words, let’s not be too quick to pass judgment.

All that being said, I am still driving the Toyota Prius that my wife and I purchased three years ago, but in order to ensure a sustainable future, I appreciate that my next car should really be electric. Or even better, I should have no car at all. Either way, I think we would look cool in a Birò. How about you?

What Happened to the Electric Car? by Brendan Barrettl is licensed under a Creative Commons Attribution-NonCommercial-ShareAlike 3.0 Unported License.