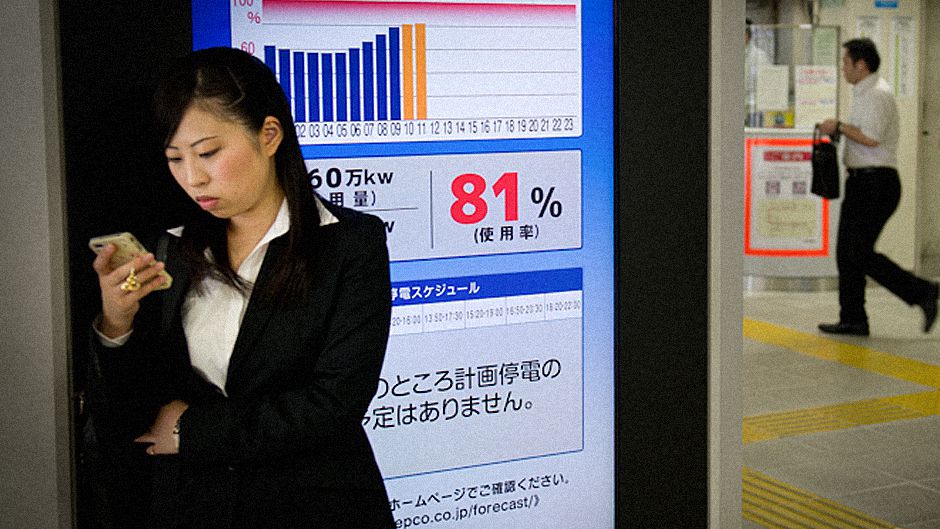 Most of us check the weather forecast in the morning before we set out for work, school or any other engagement we have that day. But how many of us check the electricity forecast?

Since the tsunami knocked out Japan’s Fukushima Dai-ichi nuclear power plant on 11 March 2011, that is what many Tokyoites have been doing. Via the Yahoo Japan website you can check the predicted electricity demand for the day with something called the Denki Yoho (Electricity Forecast).

This practical online forecast system (which is still beta) lets you know the current percentage of available electricity that is being used and gives you a forecast for the next six hours. The data used to prepare the forecast is pulled directly from the website of the Tokyo Electric Power Company (TEPCO), which is incidentally the same company responsible for the present nuclear predicament and the reason electricity supply is still short.

As we look at the forecast for today, the demand is wavering around the 74 to 79% level and all indicators are, positively, green. As electricity demand is predicted to go higher, the forecast changes colour to yellow. Then, as we get nearer to 100%, the indicators go red. If you have signed up to follow the predictions via Twitter and Mixi (Japan’s Facebook-like site) then you will get regular updates and you can take action if necessary. We used Google Translate on the Japanese original of the graphic presented below and that is why the English is a bit odd (but you get the point, we hope).

Today’s electricity forecast, with predictions for the week 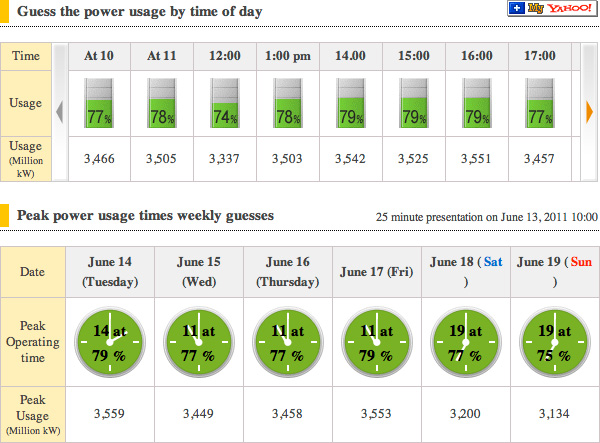 Scale of the problem

Now wouldn’t it be amazing if every community in every part of the world could have access to such a tool giving information on their local electricity supply? It would result in people being far more conscious, and perhaps conservative, about how much electricity they use. Further, it might help us move away from thinking that the electricity supply can just keep growing year on year. Instead, we could be thinking about powering down — using less electricity each year. That would represent a dramatic turnaround, one where choices, such as what electrical appliances we buy, would be based on electricity consumption rather than other features. Not buying an item might even become the most attractive option if the cost of energy rises enough.

“Dream on,” you may reply, “that is not going to happen.” There is no incentive for either the producers of electricity to reduce the supply or the consumers to reduce their demand. Still, it has taken a huge disaster to get people in a developed country like Japan to look at the issue of electricity supply differently and start modifying their behaviour accordingly.

According to TEPCO, the electricity supply capacity decreased to about 31 gigawatts (GW) immediately after the earthquake on 11 March. The immediate response was to propose a series of planned blackouts that would roll across eastern Japan affecting different locations and different times. What surprised everyone was how positively the public responded to the requests to reduce electricity consumption. As a result, the blackouts were only needed for a couple of weeks.

Gradually, the electricity supply has been restored and it is expected to climb to about 52 GW before the summer, as thermal stations knocked out by the disaster come back online, new gas turbines are installed at existing power plants and the use of pumped hydropower generation is increased.

However, one major problem confronting TEPCO (the others being the ongoing nuclear debacle and the company’s record $15 billion loss) is the fact that in the record heat of the 2010 summer, Tokyo’s electricity demand peaked at 60 GW. If this were to happen again there would be a potential shortfall in supply in the region of 8 GW.

As the temperatures and relative humidity soar in the Japanese summer (around 30˚C in the day and 25˚C at night), electricity demand grows considerably as people turn on their air conditioners at home and at work. If as a result there is a surge in demand that exceeds electricity supply, then the electricity grid would fail and major unplanned and very disruptive black outs would ensue.

With a population of 13 million (35 million in the greater metropolitan region), Tokyo is an energy hungry city. It has an extensive electric rail system including dozens of subway, suburban and inter-prefectural lines, as well as being the fulcrum of Japan’s extensive bullet train network. As Our World 2.0 has mentioned before, the city is home to hundreds of thousands of vending machines, thousands of pachinko parlours and dozens of huge digital screens in brightly lit urban centres like Shibuya and Shinjuku that suck up unnecessary energy. And like any developed society, there are huge numbers of electrical appliances in every household, business and in public spaces. So citizens will face a significant electricity demand management issue this summer and the solution requires that everybody be aware of how much electricity they are collectively consuming and how much each individual and business needs to reduce.

That is why a tool like Denki Joho is so useful. The Yahoo electricity forecast website also comes with some tips for saving electricity, although most of them will be well-known to the energy conscious amongst us — e.g., unplugging appliances when they are not in use, buying energy efficient products and using appliances like the washing machine during off-peak periods, etc.

The main challenge is how to fairly share the burden of saving electricity. After much consultation, the Japanese Government has proposed that all large and small businesses, and every individual households reduce their electricity consumption by 15% on a voluntary basis over the period from 1 July 2011 until 22 September 2011. This is lower than the originally envisaged reductions that where were as high as a 25% reduction in use for large enterprises and 20% for smaller businesses.

From a sustainability point of view it will be interesting to see whether this voluntary approach will work initially, and whether or not there will be enough time for the authorities to recalibrate their electricity use reduction policies in a situation where it is not working. And from a future energy scarcity point of view, people across the globe can learn a lot from observing if and how Japan can power-down on a large scale this summer season.

Undoubtedly our energy consumption habits are going to have to change if the people of Tokyo are to meet the energy challenge this summer. Already there are many positive signs that change is taking place.

In some neighbourhoods, almost every second street-light has been removed. It feels darker but not less safe. The lights on every drink vending machine and on the outside of local convenience stores have been turned off. Fewer lights are on at the local train stations and there are posters everywhere indicating that the train companies are trying to save electricity. Big promotional advertising screens in the city centre may be turned off at certain times of the day.

If you visit the local electrical appliance shop, you will see that people are buying fans with the lowest watt consumption rate with plans to reduce their use of air conditioning this summer. The emphasis everywhere is on energy efficient electrical appliances.

[quote quote=”Fewer lights are on at the local train stations and there are posters everywhere indicating that the train companies are trying to save electricity.” type=”image” image=”3510″ ]

On a larger scale, many companies (including Sony) are now encouraging their employees to begin work early (around 8 a.m.) and to leave early (5 p.m.) so as to avoid the peak daily electricity demand (between 6 and 7 p.m.).

Some companies are trying to concentrate more workers on the same floors in buildings, to reduce the amount of space requiring cooling. Others are exploring whether they can turn off parts of the IT infrastructure, like servers that use a lot of electricity, during certain times of the day. Car and electrical appliance manufacturers have shifted production to the weekends when generally less electricity is consumed, and given employees a ‘weekend’ on Thursdays and Fridays instead of Saturday and Sunday.

Each year in Japan, efforts are made to reduce energy consumption in businesses through a campaign called Cool Biz, about which we have previously written. This year Cool Biz is being upgraded to Super Cool Biz and in order to keep the air conditioned room temperatures in offices at 28˚C, government and business employers are allowed to “wear polo shirts, T-shirts, jeans and sneakers in the workplace starting in June, more casual than the original no-tie, no-jacket Cool Biz dress code”. Still, if you have worked in a room with the temperature set at 28˚C you will know how tiring working in these conditions can be.

Will Tokyoites be able to work collectively to implement all these energy reductions measures? Will it be possible to avoid major power cuts? Can the people of Japan maintain their high quality lifestyles with less energy?

As various environmental resource scarcity problems have begun to loom around the world, there will certainly be a lot of lessons to be shared from Japan once the summer is over.

What’s the Electricity Forecast for Tokyo Today? by Gregory Bardies is licensed under a Creative Commons Attribution-NonCommercial-ShareAlike 3.0 Unported License.

Gregory Bardies currently works on international water policies at the Asia Pacific Water Forum in Tokyo. He holds a master’s degree in sustainable development from Sorbonne University in Paris and a bachelor’s degree in geography from the University for Montreal. His past experience includes conducting environmental management processes, teaching about environment in schools in Canada, France and Japan and managing grass roots projects. He is passionate about addressing environmental challenges and raising awareness because he believes that if everyone does their part, we can respect the planet that allows us to live and preserve its precious services.