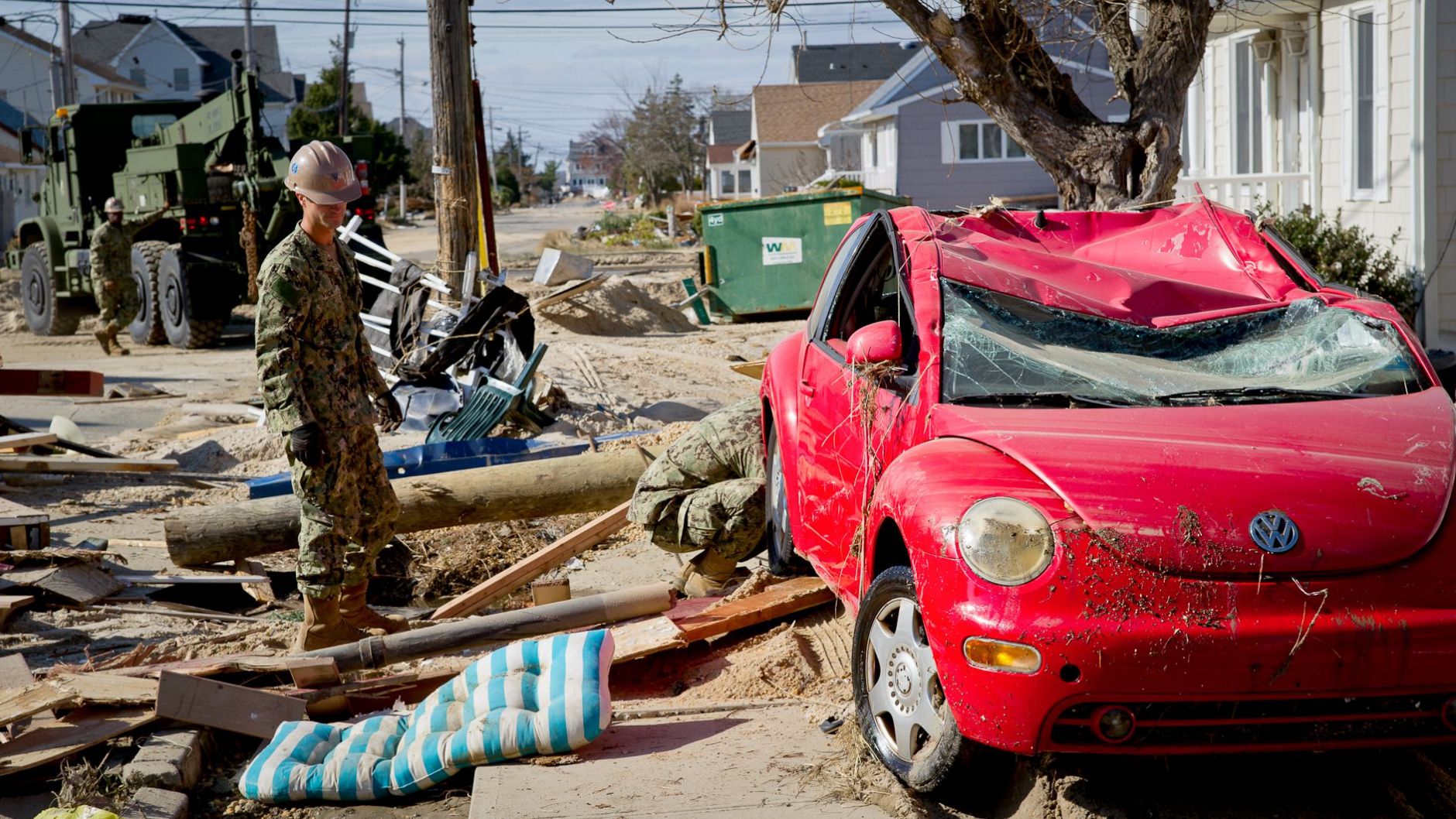 Who should pay the costs of climate disasters? In light of the current debate in the United States about federal assistance to Hurricane Sandy victims and the recent debate at the recent Doha Climate Conference about international assistance for climate change victims, that has become an increasingly pressing question for humankind.

The frequency and cost of natural disasters is rapidly increasing. Since the 1980s the number of billion dollar natural disasters on average each year in the United States has tripled from two to six. In 2011 there were 14 separate US$1 billion plus weather events and losses topped $60 billion. This year Hurricane Sandy alone will exceed that total.

As costs have exceeded the ability of insurance companies, individual homeowners, businesses and communities to pay, some states have created statewide pooled risk funds. After Hurricane Andrew in 1992, for example, Florida created the Florida Hurricane Catastrophe Fund.

An increasing federalization of disaster relief has been occurring since the 1988 passage of the Stafford Act, which required Washington to assume at least 75 percent of the costs of federally declared disasters. Predictably, the number of such declarations has increased dramatically, from 53 in 1992 under George H.W. Bush to 110 in 1999 under Bill Clinton, to 143 in 2008 under George W. Bush. In 2011 President Obama set a record by declaring federal disasters 242 times.

But as Hurricane Sandy has demonstrated, natural disasters are exceeding even the Federal Emergency Management Agency’s expanded financial capacity, leading to the need for additional ad hoc Congressional appropriations. This has given a boost to efforts to create a natural catastrophe insurance fund that would pool the risk nationally, similar to the terrorist catastrophe fund put in place immediately after 9/11 with the passage of the Air Transportation Safety and System Stabilization Act. The fund created by that Act eventually paid out about $7 billion to more than 7400 victims. In 2002 Congress passed the Terrorism Risk Insurance Act. The program is triggered if losses exceed $100 million and cost to an individual insurance company is more than 20 percent of premiums paid. When the program is triggered, the federal government pays 85 percent of insured terrorism losses in excess of individual insurer trigger/deductibles while the insurer pays 15 percent. The program is capped at $100 billion per year.

But national natural catastrophe insurance has proven a hard sell. In 2008, when Congress debated a form of national catastrophe fund called the Homeowners Defense Act, presidential candidate Senator McCain of Arizona argued that since the natural disasters that it was targeting occurred primarily in the south and southeastern part of the United States, the risk should be pooled regionally not nationally. In a 2009 report the Heritage Foundation agreed, although it might have undermined its case with its example, “a catastrophic hurricane could hit New York and Connecticut, but such an event may not happen for many years, if at all. Therefore individuals living in those states cannot be held to be placing themselves at risk of such a low probability event.”

Despite the lack of progress on a national catastrophe fund and the refusal of the Republican House to quickly approve federal assistance to the victims of Hurricane Sandy, the principle that we are all in this together does seem widely accepted.

Which brings me to last November’s Doha Conference on Climate Change.

The sad truth is that the poorest countries on the planet will be hit first and hardest by climate change. In the last decade it is poor counties like Honduras, Myanmar, Nicaragua and Bangladesh and Thailand that have been most battered by the climate storm.

In the 1990s global climate conferences focused on greenhouse gas reductions. In 2010, at Cancun, governments began to focus on adaptation and mitigation, pledging $30 billion in “fast start” funding for 2010-2012 and $100 billion annually by 2020. (The latter is the annual cost of adaptation to a 2-degree C. warmer world as estimated by the World Bank.)

At Doha the 195 participating countries went a step further. For the first time the phrase “loss and damage from climate change” made it into an international legal document.

US and UK negotiators made certain that neither the word “compensation” nor any other term connoting legal liability was used in the final text. But for the first time richer countries seem to have accepted their moral obligation to offer aid, given their outsized contribution to the problem.

True, Doha is only an agreement in principle. No money was committed nor was a mechanism established to dispense the aid. The issue will be revisited at the next climate conference in Warsaw this year.

Where will the money come from? Many worry that it will come from existing foreign aid budgets. And that is exactly what happened when the UK created the adaptation-oriented International Climate Fund with money transferred from existing aid commitments.

The signs are not promising about our willingness to help. A month after Hurricane Sandy struck the US coast, typhoon Bopha struck the Philippines, the fourth major natural disaster in as many years, devastating the economy and leaving as many as 2000 dead. The current estimate of the total cost is $839 million. The Philippines requested $65 million in immediate assistance. Currently it has received only $12 million. US AID gave $100,000. (USAID maintains it has provided about $11.7 million in disaster response assistance to the Philippines over the past five years.)

The United States ranks near the bottom in terms of countries that give foreign aid. US foreign aid constitutes only 0.19 percent of our GDP. The international leaders, Sweden, Denmark, the Netherlands and Norway give from 0.80 to 1.2 percent of their GDP. Most other European donors give between 0.38 and 0.50 percent. And for most Americans even this is too much. A recent USA TODAY/Gallup poll found that 59 percent of Americans favor cutting foreign aid.

Moreover, the vast proportion of US foreign assistance is given for geopolitical and military considerations, not for humanitarian aid. Indeed, last March, Representative Ileana Ros-Lehtinen (R-FL), Chairman of the House Foreign Affairs Committee questioned the priorities on US foreign assistance to the Western Hemisphere. She wanted funds directed more towards counter narco-trafficking efforts and security assistance and not to offset climate change impacts insisting, “With limited resources, we must ask if this best meets our US national security interests.”

At the Doha climate conference, 195 countries accepted the premise of a global pooling of risk.

Pooling climate change risk nationally is now widely accepted by US policymakers. At Doha 195 countries, including the United States, accepted the premise of a global pooling of risk. What might be the governing principle for such a global pool? Perhaps the Bible could give us guidance. When famine was predicted the Bible notes, “Then the disciples, every man according to his ability, determined to send relief unto the brethren which dwelt in Judaea.” (Acts 11:29. King James Bible)

Hurricane Sandy hit the richest section of the richest country on earth. Connecticut is by far the richest state. New Jersey ranks third and New York fourth. Connecticut has a per capita income of $56,000. The Philippines has a per capita income of $2,000. That stark disparity argues for the Mid-Atlantic States to generously join in helping the Philippines even as they ask the other US states to help them.

Just as the Stafford Act was intended to stop the ad hoc financial response to natural disasters, an outcome of the upcoming Warsaw conference might be to create a comparable international mechanism and agency.

How will such a mechanism be funded? From a tax on greenhouse gas emissions. Such a tax is both fair and strategic. It will impose costs commensurate with the damage generated while at the same time providing a market signal that will reduce future damages.

In the United States, a $10 per ton of CO2 tax would raise about $60 billion annually, sufficient funds to pay for adaptation, mitigation and assistance for at least for the foreseeable future. An additional $10 per ton paid by the richer nations alone would provide sufficient funds on an international scale to pay for adaptation and compensation, although all nations should be required to pay something in catastrophic insurance premiums.

Much needs to be worked out both on a national and international level. Who should dispense the money? What formula should govern the funds disbursement (i.e., what percentage of the costs should the national or international fund cover)? How do we assess the actual damages? Are funds available to cover only the costs of climate-induced natural disasters or for broader natural disasters such as earthquakes and volcanoes?

The conversation will be hard and loud. But the confluence of the devastation wrought by Hurricane Sandy and the agreements at Cancun and Doha by richer nations to help pay for adaptation and mitigation as well as assist the victims of climate change has brought to the United States and the world the centrality of the question. Who will pay the costs of climate change?

This article appears courtesy of On the Commons.

Who should pay climate change costs? by David Morris is licensed under a Creative Commons Attribution-NoDerivs 3.0 Unported License.
Based on a work at http://www.onthecommons.org/magazine/who-should-pay-costs-climate-change.

David Morris is co-founder and vice president of the Minneapolis- and DC-based Institute for Local Self-Reliance and directs its Public Good Initiative. His books include The New City-States and We Must Make Haste Slowly: The Process of Revolution in Chile.