The World Bank recently warned that food prices are increasing at a dramatic pace, having already doubled over the last three years. They predict that 100 million people in low-income countries are now at risk of being pushed deeper into poverty.

According to the Food and Agriculture Organisation (FAO), 37 countries are currently in need of external assistance in order to cope with their food situation. The steep rise in prices has already increased the World Food Programme’s operating costs from $500 million up to $750 million.

In response there are calls for short-term emergency measures to meet urgent critical needs and avert starvation in many regions across the world. At the same time, mid- and long-term measures are required to increase food grain production.

But why is this happening? Disastrous weather in some places and the switch to biofuels in others are things that lie at the heart of the problem. There have been food riots in Taihiti, Egypt, Côte d’Ivoire, Burkina Faso, Cameroon and Indonesia.

This complex and troublesome trend has been described as a silent tsunami by World Food Programme, Executive Director, Josette Sheeran.

The complex combination of causes

The biggest price increases have been for cereals, oils and fats, and dairy products. In 2007, the main price jumps were for wheat, which increased by 50 to 80% over 2006 levels. Maize prices also rose to a ten-year high in February 2007, and fortunately then fell considerably. The prices of barley also soared.

According to UN Secretary-General Ban Ki Moon, the reasons for escalating food prices are complex. It is not simply due to producers swapping from food production to bio-fuels. High oil prices also affect both the cost of food production and its transportation. Natural disasters and droughts, for example in Australia, have also affected food production. In addition to the impact of oil prices and freight rates, the FAO argues that exchange rates have a big impact on food prices, especially the weakening of the US dollar.

It is very easy, when surrounded by supermarkets full of goods, to believe that this is simply a problem for the developing world. It is certainly true that the immediate impact and consequent food riots have been in developing countries. However, global markets have become increasingly intertwined. The FAO warns that the “linkages and spill-over effects from one market to another have greatly increased in recent years, not only among agricultural commodities, but across all commodities and between commodities and the financial sector.”

For a country like Japan, which relies heavily on imported food, the rising food prices are a cause for concern. Each year Japan imports around US$50 billion worth of food. In 2006, the largest part of these imports were seafood (28%) and meat (12.6%). Most of the imported food comes from the US, China and Australia, together making up 47% of Japan’s imports.

Data from the Ministry of Agriculture, Forestry and Fisheries shows that in terms of food self-sufficiency, Japan is able to provide for 39% of the calorific intake of the population and 68% of the value of agricultural output. Though now a cause for concern, when food prices were low the Japanese population was happy to consume food products from around the world.

Recently Japan began feeling the impact of rising food prices and increased competition for the food resources. Growing competition for seafood, particularly from China, is pushing prices up and affecting seafood imports to Japan. In April 2008, butter disappeared from supermarkets in Japan. The reason stems from increases in cattle feed stock prices that impacted on dairy farmers who, fearful of shrinking demand for milk after a glut two years ago, then pre-emptively reduced production. Hence the shortage and big bump in the price of butter. 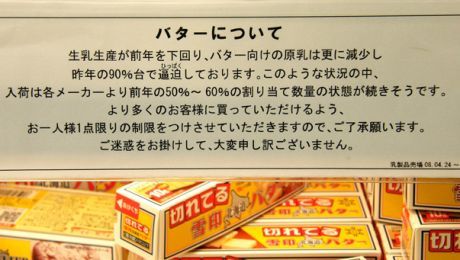 Due to the butter drought in Japan from April 2008, supermarket customers were only allowed to take one packet of butter per person. Photo: Nemo’s great uncle.

This has led some commentators, such as Akio Shibata from the Marubeni Research Institute, to argue that in the future, “Japanese people may not be able to have the quality and the low prices of food that they are used to.” There are expected to be many other visible signs of the impact of higher prices over coming months.

The rich are not guaranteed to be spared from these impacts since the reduced global food inventories imply that the situation is precarious and dramatic changes can occur very quickly.

What can we do?

Dominique Strauss-Kahn of the IMF calls for a global approach to tackling food prices. The first step has been to provide more financial resources to the World Food Programme in order to help feed the poor in different parts of the world. The UN has also been providing aid directly to farmers in many developing countries.

Alex Evans from New York University argues that: “We need to be clear at the outset about the nature of the choices that we face. There are real tradeoffs between different potential objectives in food policy—such as competitiveness for consumers, security of supply, environmental conservation, local sourcing. That raises the question: who is the ‘we’ that decides the shape of 21st-century food policy? Who has the power to make choices?”

He considers that, “stressing the reality that we have the power to make choices about the kind of food system we want is a good starting point. In that light, we may find that ‘food democracy’ is a more useful frame than ‘food security’—both in the kind of thinking that it engenders, and in the policy options and approaches that it implies.”

We can expect a lot of changes to take place and in the longer term, agricultural policies may be transformed to support more localized production of food in the developing world by tackling the issue of subsidies and by improving agricultural performance.

There needs also to be a more cautious approach to the promotion of biofuels. But in the end, the solutions are not going to be simple.

Now is not the time for complacency. Rather this is an excellent opportunity to learn more about the global food crisis, and how it connects to other issues like climate change, population growth and peak oil. This is a problem that has crept up on the international community, although some commentators have been predicting its occurence for decades. It is also a problem that will continue to evolve other the coming years.

In this context, it is important that we try to learn more about the underlying causes and that we begin to think about how this could affect our lives.

What in the world is propelling food prices? by Brendan Barrett is licensed under a Creative Commons Attribution-NonCommercial-ShareAlike 3.0 Unported License.