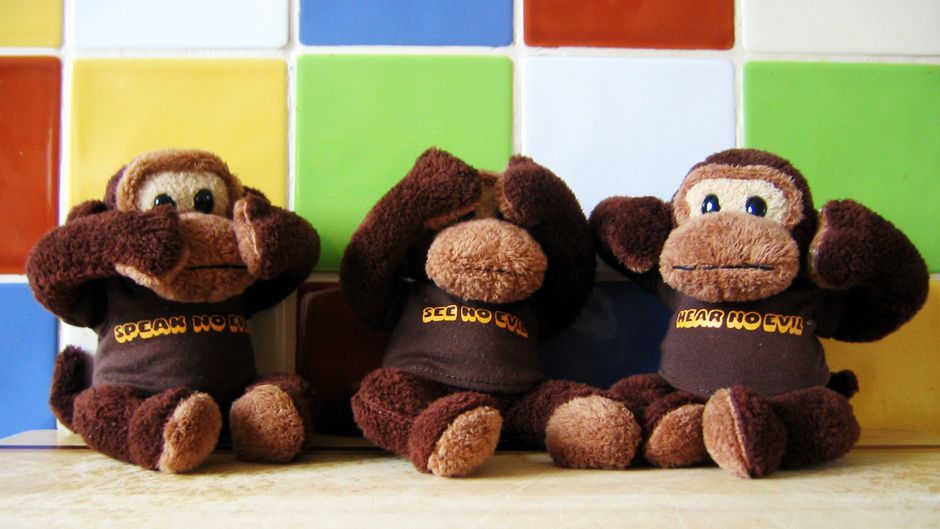 Jared Diamond famously stated that “the biggest problems facing the world today are not at all beyond our control, rather they are all of our own making, and entirely in our power to deal with” when talking about his book Collapse: How Societies Choose to Fail or Succeed. 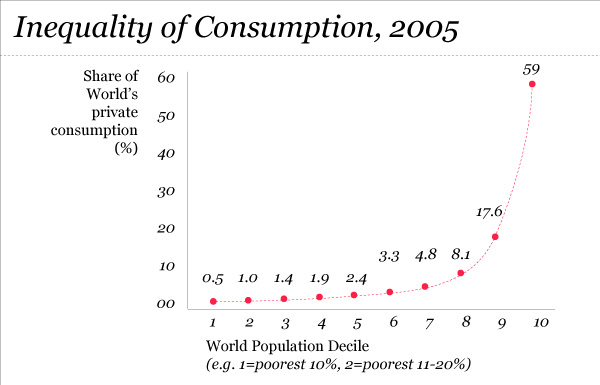 But why have human ingenuity, technology, knowledge, and wealth grown step in step with unsustainability? If you compare the Human Development Index with resource use, we can see that as soon as countries meet the development standard of “high human development” they inevitably cross the line of unsustainability.

Opponents of this view will say that human well-being has on average increased in the world. However, while this is true, the indicators for species extinctions, habitat loss, greenhouse gas emissions and resource depletion have all been negative for a prolonged period of time.

Personal consumption data is even more telling. When the richest 10 percent account for 60 percent of all private consumption, we have to ask ourselves if these top-tier consumers could possibly improve their well-being any further through material gains?

Back to our pre-modern roots

Researchers like E.O. Wilson explain this paradox with a theory rarely incorporated into decisions – evolution.

The characteristics of human behaviour that became fixed in our population through natural selection occurred over the 95 percent of our pre-modern existence where we lived in sparsely populated hunter-gatherer bands with local community connections. Then the resource problem was one of local access.

Early human societies had primitive and inefficient ways of collecting resources, so those that thrived were ones that developed high rates of consumption and new innovations for resource gathering. They also had built up strong identity with their own community and competitiveness with others, and short-term thinking (discounting the future).

Why do we always need more stuff?

One of the basic human needs is food: the accumulation of which, along with other resources, is directly linked to the ability to reproduce and provide for a family. In pre-agricultural times, it was unlikely that a single family or tribe could gather enough food to make any further consumption undesirable, so there was little need for the evolution of a trait to limit consumption.

The second greatest human need was to secure a partner for reproduction. Unsurprisingly, it seems that those that could secure more resources through their hunting skills or status also had the best choice of mates. Research shows that women in all cultures, more than men, prefer partners with higher social status and that flaunting what you’ve got helps to seal the deal, so to speak.

Acquiring enough resources is not the end of it. Status is a comparative mark (dependent on one’s immediate peers), and relates to competition. Often cited research by the likes of J.F. Helliwell shows that happiness levels peak at an income level of $10,000 per year in the US, after which happiness is determined by one’s relative affluence. 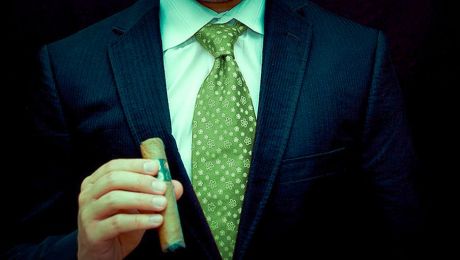 The over-consumption pattern just gets more intense as we move up the social ladder. Photo: David Levitz.

That most of us want to earn more is therefore very well explained by sexual selection: the process of choosing a sexual partner.  Some individual male birds — a species whose mating relationships most resemble humans — will spend a great deal of energy building elaborate, colourful and useless displays on the forest floor to attract females. But in doing so they signal to the female counterpart that they get along just fine nonetheless: a sign of a healthy, capable individual.

Researchers think that people buy yachts, numerous cars and expensive jewelry in the same way. This over-consumption pattern just gets more intense as we move up the social ladder, and seems to have little to do with satisfying living needs. That is, when we become successful enough to own yachts and expensive cars, the absolute amount of possessions does not dull the drive to consume — because we tend to hang out with other people who own yachts and expensive cars and they put a damper on our relative status.

Today, advertising and marketing professionals exploit this drive, as they do many traits of human nature, to keep the consumption train going. This may in part explain the continued wealth disparities between individuals.

Why can’t we all just get along?

Competition is closely linked with consumption, as it produces social hierarchies among members of a group depending on their ability to secure resources. The idea of “us” and “them” was a very important one when humans lived in territorial bands and formed allegiances against common enemies.

Membership in a group provided security against aggression from other groups and means to cooperate. Internally, there was still a hierarchy that enabled the strong to control relationships and resources.

From the perspective of evolutionary fitness, the strongest individual had the opportunity to pass along the most genes, while receiving the protection of the group. Since evolutionary pressures act on individuals, competition and consumption do not have a shut-off point when the survival of the species is at stake, and there are many examples of human societies (think Easter Island) that likely competed themselves to extinction.

Today, we can look at political divisions to see how competing loyalties and different identities stall our efforts at cooperation. One reason why the United Nations organisation could not unanimously interfere in acts deplored by members (like genocide in Sudan or Rwanda) is that it is a collection of leaders whose allegiances lie elsewhere, such as with their in-group that provides security and shares commonalities like language, religion or culture.

In federal states like Canada, the national government has little power to enforce national policies in Alberta, where oil sand development is provincial jurisdiction, even though it may impact aboriginal communities falling under national protection. There inter-provincial and intergovernmental competition is a defining feature of that country’s politics.

Is it any wonder we are just now beginning to attempt to halt carbon dioxide emissions, nearly 20 years after the need was demonstrated?  How will any deal reached at COP15 in Copenhagen be implemented in countries with competing sub-national identities?

With new global problems like poverty, climate change and biodiversity loss, we are now being asked to be global citizens, and care about those we have never met, and areas we will never visit. This runs counter to our evolutionary past.

Evolution of culture and ideas

But are we slaves to our genes? No serious biologist believes that is the case regarding behaviour, we simply have genetic predispositions to do some things and not others. So the question is: how can we put our ingrained traits to benefit, or even overcome them?

There are certainly ways that human characteristics can be considered and utilised in working towards sustainable future paths.

The melting Antarctic ice sheet — no matter how bleak the images on TV — does not seem able to provoke wide enough behaviour change, because most of us can all go back to our daily lives, unaffected. Our individual interests have to be tapped to create the political support for implementing progressive ideas, and one way to do this is with money.  The recent call for rich nations to put up at least $10 billion a year to entice developing countries into an agreement at COP15 is a starter because dollars can easily be mentally translated into benefits.

Regulation can also be swallowed more easily with the aid of self-interest — like the very recent EPA announcement that GHGs are health dangers, clearing the way for laws restricting their release. 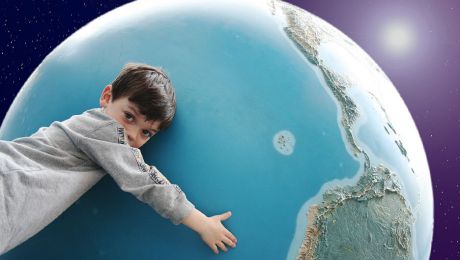 Environmental education for the world’s children is indispensible to nurturing an identity that recognises the intrinsic value of nature and equality of cultures. Photo: Woodley Wonderworks.

Other ways of playing to individual interests is through reputation — rewarding and shaming. Or by setting an extreme baseline for policy and then intermittently moving it back. For example, like closing the tuna fishery and then opening it back up slowly. Expectations for improvement from an undesirable baseline can be more acceptable than an unsustainable benefit with dire future predictions.

Another manner of influencing behaviour is perhaps the most obvious. Environmental education for the world’s children, that builds on human-nature relationships, is indispensible to nurturing an identity that recognises the intrinsic value of nature and equality of cultures.

Such education is bound to pay off. We often point to that which makes humans unique — our language, intelligence, art and culture — as the root of cultural evolution. In other words, the development and passing down of ideas and values by societies that have lots of spare time after they have met their livelihood needs.

There is evidence that shows we increasingly live for ourselves, forego reproduction, enjoy life past reproductive age (thanks to the evolution of menopause), turn to cooperation over conflict, and choose partners based on humour and personality — traits that may not be indicators of reproductive success and survival.

Cultural evolution is quicker and can be more powerful than our ingrained instincts. Our modern environment has changed from locally centered to global, and biologically we have not caught up. Our ideas have to make up the difference.

Why Do We Over-Consume? by Darek Gondor is licensed under a Creative Commons Attribution-NonCommercial-ShareAlike 3.0 Unported License.