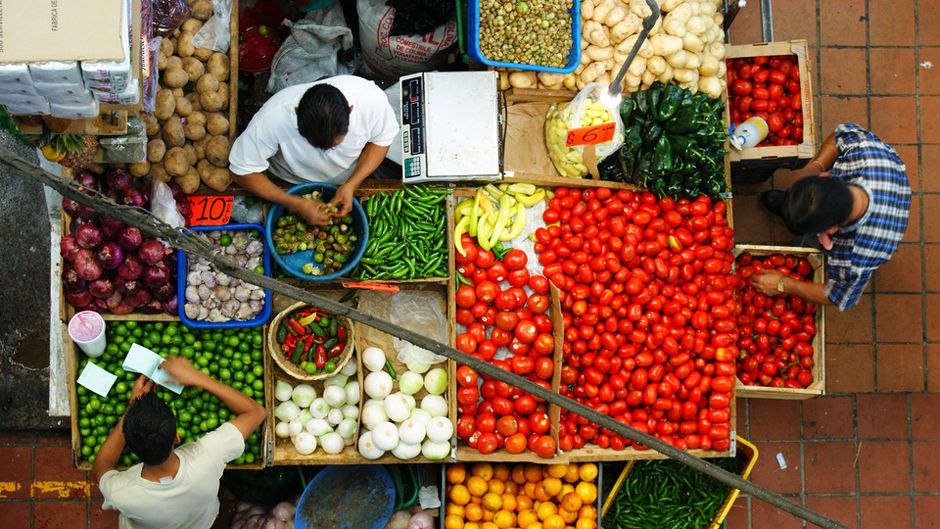 Food is treated as a private good in today’s industrial food system, but it must be re-conceived as a common good in the transition toward a more sustainable food system that is fairer to food producers and consumers. If we were to treat food as a commons, it could be better produced and distributed by hybrid tri-centric governance systems implemented at the local level and compounded by market rules, public regulations, and collective actions. This change would have enormous ethical, legal, economic, and nutritional implications for the global food system.

A common resource versus a commodity

Food, a limited yet renewable resource that comes in both wild and cultivated forms, is essential for human existence. Over time, it has evolved from a local resource held in common into a private, transnational commodity. This process of commodification has involved the development of certain traits within food to fit the mechanized processes and regulations put in practice by the industrial food system, and it is also the latest stage in the objectification of food—a social phenomenon that has deprived food of all its non-economic attributes. As a result, the value of food is no longer based on the many dimensions that bring us security and health, including the fact that food is a:

Our most basic human need, privatized

The industrial food system’s enclosure of food through the privatization of seeds and land, legislation, excessive pricing, and patents, has played a large role in limiting our access to food as a public good. The system now feeds the majority of people living on the planet and has created a market of mass consumption where eaters become mere consumers. As such, the industrial food system’s goal is to accumulate under-priced food resources while maximizing the profit of food enterprises, instead of ensuring food’s most important non-economic qualities, such as nutrition. Many believe this has resulted in the failure of the global food system.

We can’t rely on the market

Within the mainstream “no money no food” worldview, hunger still prevails in a world of abundance. Globally speaking, the industrial food system is increasingly failing to fulfill its basic goals of producing food in a sustainable manner, feeding people adequately, and avoiding hunger. The irony is that half of those who grow 70% of the world’s food go hungry today. Most believed that a market-led food system would finally lead to a healthier global population, yet none of the recent analyses of the connection between our global food system and hunger have questioned the privatization of food. As a result, most people believe food access to be the main problem of global hunger.

But reality proves otherwise. Unregulated markets simply cannot provide the necessary quantity of food for everyone — even if low-income groups were given the means to procure it. An industrial food system that views food as a commodity to be distributed according to market rules will never achieve food security for all. There won’t be a market-driven panacea for our unsustainable and unjust food system; rather the solution will require experimentation at all levels — personal, local, national, and international — and diverse approaches to governance — market-led, state-led, and collective action-led. We need to bring unconventional and radical perspectives into the food transition debate to develop a different narrative for our food system.

A “re-commonification” of food — or, in other words, a transition where we work toward considering food as a commons — is an essential paradigm shift in light of our broken global food system. However, there would of course be practical consequences of this paradigm shift. Food would need to be dealt with outside of trade agreements made for pure private goods, and, as a result, we would need to establish a particular system of governance for the production, distribution, and access to food at a global level. That system might involve binding legal frameworks to fight hunger and guarantee everyone the right to food, cosmopolitan global policies, ethical and legal frameworks, universal Basic Food Entitlements or Food Security Floors guaranteed by the state, minimum salaries matched to food prices, bans on the financial speculation of food, or limits on alternative uses of food, such as biofuels.

Agricultural research and locally adapted, evidence-based technologies would highly benefit from crowdsourcing and creative-commons licensing systems to improve the sustainability and fairness of the global food system as well. When millions of people innovate, we have a far greater capacity to find adaptive and appropriate solutions than when a few thousand scientists innovate in private labs. There is more and more evidence today that the copyrighted agricultural sector is actually deterring food security innovations from scaling up, and that the freedom to copy actually promotes creativity and innovation, such as with open-source software.

What it might take to “re-commonify” of our food system

Collective civic actions, or alternative food networks, are key in the transition toward a more sustainable and fairer food system because they are built on the socio-ecological practices of civic engagement, community, and the celebration of local food. Based on Elinor Ostrom’s polycentric governance, food can be produced, consumed, and distributed by tri-centric governance schemes comprised of collective actions initially implemented at the local level; governments whose main goal is to maximize the well-being of their citizens and to provide a framework enabling people to enjoy their right to food; and a private sector that can prosper under state regulations and incentives.

Today, in different parts of the world, there are many initiatives that demonstrate how such a combination yields good results for food producers, consumers, the environment, and society in general. The challenge now is to scale up those local initiatives. Self-governing collective actions cannot create the transition by themselves, thus there will be space for local governments, entrepreneurs, and self-organized communities to coexist, giving the state a leading role in the initial stage of the transition period to guarantee food for all.

We are just starting to reconsider the food narrative to guide the transition from the industrial food system toward an attainable and desirable utopia. It may take us several generations to achieve, but, as Mario Benedetti rightly pointed out, utopias keep us moving forward.

Why Food Should be a Commons Not a Commodity by Jose Luis Vivero Pol is licensed under a Creative Commons Attribution 3.0 Unported License.
Based on a work at http://www.shareable.net/blog/why-food-should-be-a-commons-not-a-commodity.

Jose Luis Vivero Pol is an anti-hunger and social rights activist with fourteen years of experience on food security policies and programs, Right to Food advocacy, nutrition interventions, and food sovereignty in Latin America, Africa, and the Caucasus. Additionally, he has experience in biodiversity conservation and plant genetic resources. An agricultural engineer by profession, he is a PhD research fellow at the Catholic University of Louvain, and his current interests include the ethical, legal, and political dimensions of the transition toward fairer and more sustainable food systems, the governance of global commons, and the motivations for biodiversity conservation and anti-hunger actions.