Why I Joined the People’s Climate March 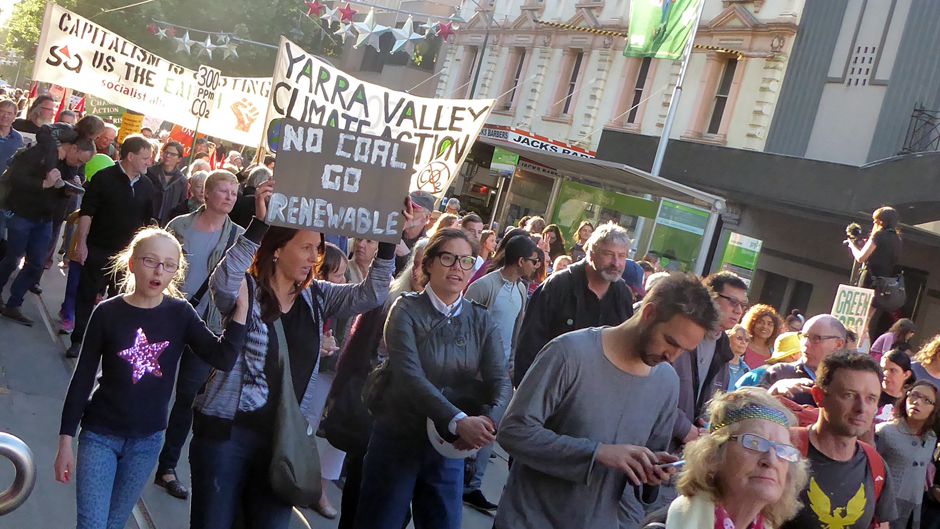 Eighteen years ago, in 1997, I found myself in Japan at the Kyoto Protocol negotiations.

I was a brand new researcher with the United Nations University (UNU) and ended up being seconded to the Secretariat of the UN Framework Convention on Climate Change (UNFCCC) for COP3. That all sounds very technical. COP stands for the Conference of the Parties (i.e., nations that signed the Convention) and we are now up to COP21, which is currently taking place in Paris (just in case you haven’t read a newspaper or watched TV news recently).

In Kyoto, my role, as part of a small team, was to sit in the negotiations and record every point made by the delegates. It was like being a fly on the wall. Our notes were then used by the UNFCCC staff to amend the protocol to reflect the points made by the delegations. It was a really cool assignment but also exhausting since the negotiations would run into the night and sometimes spill over into the next day.

In the blur of a hectic schedule, I remember sitting and listening to Al Gore when he gave an impressive speech to the plenary. But what I recollect most of all is the feeling of elation when the Kyoto Protocol was adopted on the final day.

In my naivety I believed that we had done it, we had solved the climate problem. Eighteen years later, here we are again putting our hopes on the outcome of the Paris negotiations.

Unfortunately, things have not gone as hoped since 1997. Back then, the annual mean concentration of CO2 in the atmosphere as monitored by the Mauna Loa Observatory (an atmospheric baseline station) in Hawaii was 363.71 parts per million (ppm). Now it is closer to 400 ppm. That is a pretty significant increase and what is even more worrying is the fact that the annual mean growth rate of CO2 concentration is also on the rise. We are accelerating when we should be breaking.

Now, if you want to know how this translates into total emissions the best place to look is the Global Carbon Project. They estimate that in 2013 total global CO2 annual emissions stood at 39 gigatons of CO2 and the breakdown by source is shown in the chart, highlighting the role that fossil fuels play in this tragic story. 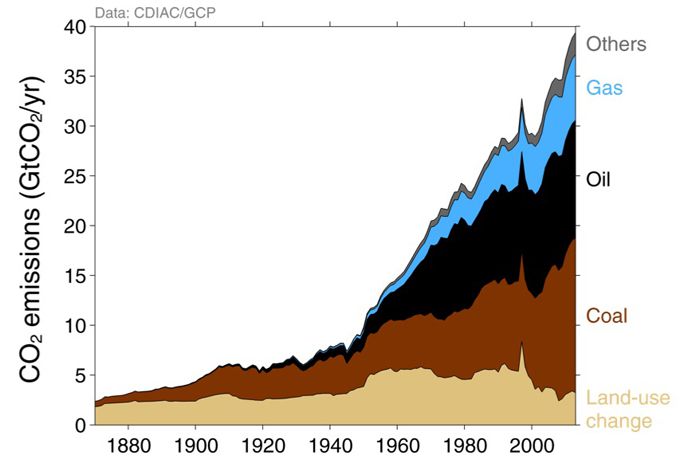 What the scientists are telling us through the work of the Intergovernmental Panel on Climate Change (IPCC) is that we need to keep the global temperature rise to less than 2°C because there is evidence that we will very likely face climatic changes with dangerous impacts if we go beyond this threshold. To have a chance of staying below this threshold the IPCC argues that it is imperative for emissions to peak and decline sometime between 2015 and 2020. That does not give us much time.

The science community has been telling us these things for quite some time now, but the message was not getting through to a wider public. That is precisely why, back in 2007, myself and a few colleagues at the United Nations University began to discuss how we might convey our concern about climate change to regular folks. We came up with the idea for Our World magazine and how we could use it to explore the interactions between climate change, peak oil, food security and biodiversity loss. We weren’t the only ones because, at about the same time, Yale University launched Yale Environment 360 and the University of Minnesota started Momentum (which became Ensia in 2013).

I am really proud to be associated with Our World because we have been able to reach millions of readers since the magazine was launched in 2008 (many more if you include the video briefs that we produced).

However, from the very start I said that I would work on the magazine until 2015 and then see how it goes. I guess that I thought that by 2015, the world would be making more progress in transitioning to fossil-fuel free, low carbon societies.

While there has been some progress, clearly we need to accelerate the transition in the next five years.

So, what can we expect from COP21?

As you may have read elsewhere, all UN countries, as parties to the UNFCCC, were required to submit Intended Nationally Determined Contributions (i.e., pledges to reduce their emissions) before COP21. An analysis of these pledges by the UN Environment Programme (UNEP) has revealed, however, that the current proposals will not be enough to keep us from exceeding the 2°C threshold. UNEP estimates that, even after implementing all of the pledges in their current form, by 2030 the world will still be emitting somewhere between 12–14 gigatons of carbon dioxide equivalent (GtCO2e) each year more than we should be. This is referred to as the emissions gap.

Based on this analysis, UNEP is suggesting that full implementation of the plans would place the global temperature increase somewhere in the region of 3–3.5 °C by 2100. 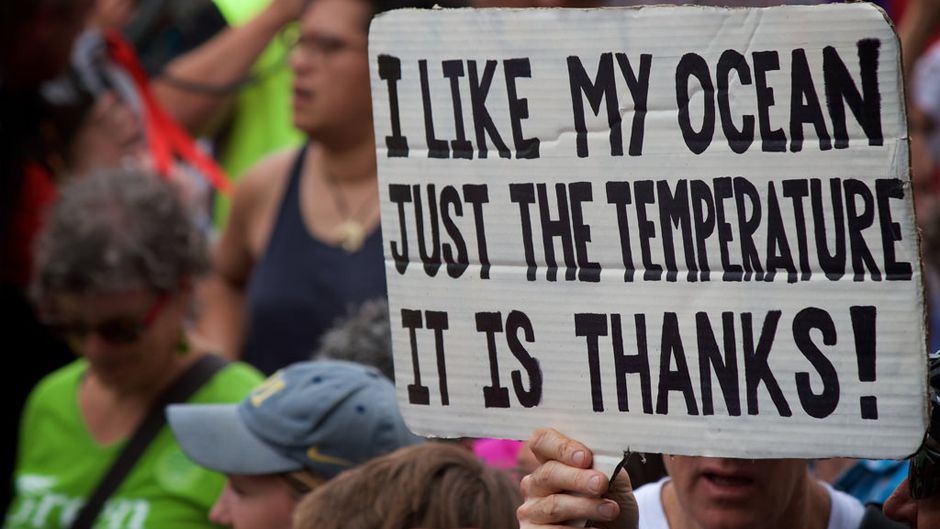 Meanwhile, Christiana Figueres, Executive Secretary of the UNFCCC, has suggested that the pledges have “the capability of limiting the forecast temperature rise to around 2.7°C by 2100”.

Now is the time

I do not want to be sitting at my desk in 2033 (another eighteen years from now) writing about how the pledges were never met and how emissions did not peak before 2020. We have to keep the pressure on governments to act after COP21.

Over the next decade academics will analyse the outcome of COP21 to explain what worked and what did not. They will question whether the idea for pledges (which was approved by countries at COP20 last year) was a stroke of genius or the work of fools. If we don’t turn things around quickly they may ask whether the UNFCCC was fit for purpose and perhaps hold climate negotiators mainly responsible for how we wasted so much time. But that would be unfair.

In my view, the outcome of COP21 is not of concern. Most important are the actions we take. That is why on Friday 27 November I marched through central Melbourne with around 40,000 to 60,000 others (depending on which estimate you believe) as part of the People’s Climate March. That is why over the weekend over 785,000 people marched across the globe (according to Avaaz.org).

I do not consider myself to be an activist. Quite frankly, it was a rather odd feeling to be walking down Swanston Street in Melbourne and to see just as many people watching, going shopping or having a drink in a bar or café as there were actually marching. I was wondering what they were thinking and when might they step into the street and join us.

I was inspired by the passion of the people I was marching with. It does take people power to bring about change. At the end of the rally, everyone sang Paul Kelly’s “From Little Things Big Things Grow”. It is a song about the indigenous Australian struggle for land rights and reconciliation, but seemed so appropriate. The climate movement will grow as problems worsen across the planet.

So, now I feel I can no longer sit on the sidelines, as a fly on the wall. By marching in Melbourne, we were showing our solidarity with everyone on the planet and also with the victims of the Paris terrorist attacks. It was our call for a better world. 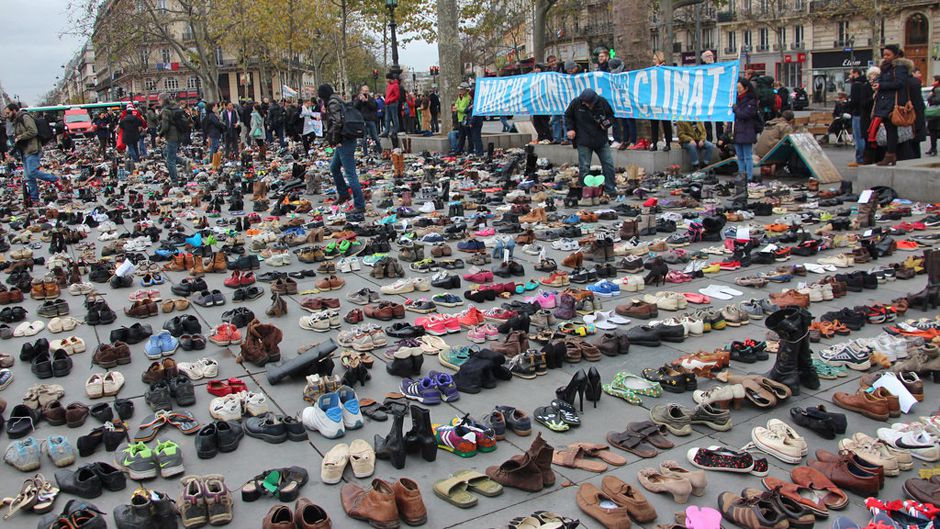 But I want to add an additional idea here. I agree with Marlene Cimons who recently wrote an article on Climate Progress arguing that local commitments will be the key to success after COP21. She argues that “thousands of cities, states, regions, provinces, businesses, and non-governmental organizations have already started to move aggressively on climate change”.

My own experience supports this. In my current role undertaking research on the activities of cities across the globe I have noted how many are committing to ambitious climate targets. For instance, Berlin is aiming to reduce its CO2 emissions by 85% by 2050, and Oslo aims to be fossil-fuel free by the same date. Local politicians are listening to local voices. This is where the conversation is taking place.

Local governments have set up various collaborative efforts designed to promote decarbonisation such as C40, the Carbon Neutral Alliance, the World Council of Mayors on Climate Change and the European Covenant of Mayors. A recent study from the Netherlands Environmental Assessment Agency found that existing efforts at the “subnational level could deliver greenhouse gas emission reductions of 2.5 gigatons of carbon dioxide equivalent (Gt CO2e) by 2020 and 5.5 Gt CO2e by 2050.”

Cimons also pointed to the important role that business can play. For many of those participating in the People’s March on Friday big corporations are not to be trusted and capitalism is the force behind the ongoing destruction of the natural world.

But, as one speaker remarked in Melbourne before we set off on our March, “we are the economy”. Big corporations are made up of people. How can these powerful corporations become a force for good? It is a tough question. One answer will be for the people inside the corporations to speak up and push for change. Another is for the people who buy the products offered by these corporations to put pressure on them by asking for accountability. 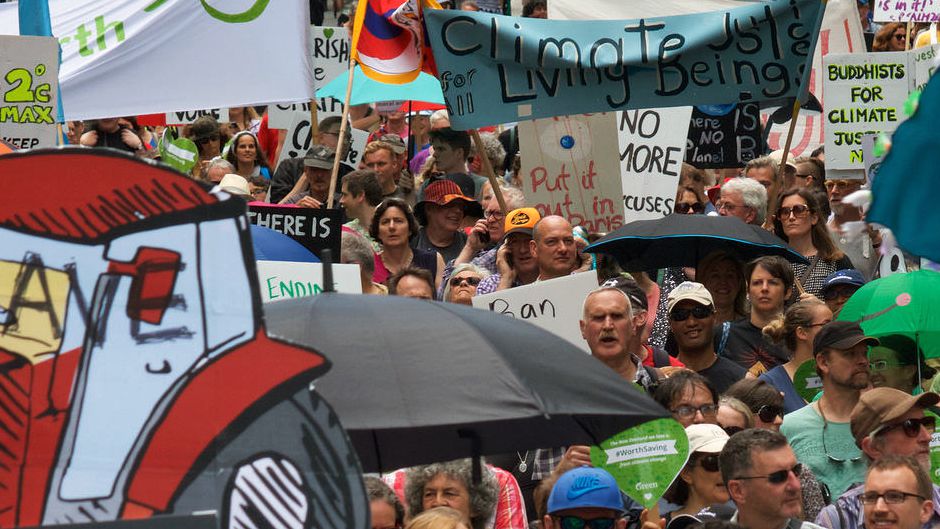 Right now big corporations hold all of the power. For example, in 2013 the Global Fortune 500 list of the wealthiest and most profitable companies generated revenues of over US$30.3 trillion while the global GDP for that year was around US$75.5 trillion. In other words, 40% of the global GDP is in the hands of 500 international companies. This power can either be used to maintain “business as usual” and its terrible consequences for our world, or to promote the rapid transformation to a better future. Let us hope that they are at the forefront of positive change, because their bottom line will depend upon it.

I know I should end here with some upbeat takeaway message but that would be disingenuous. I suspect that the next decade is going to be a very troubling one. The participants in the People’s March are on the front lines of what Jeremy Leggett calls “The Carbon Wars” in his upcoming book. But so too are you.

As Leggett points out, humanity is in a race towards a clean energy, low carbon future. There is going to be a lot of opposition by those who like things just as they are. We are going to have to be very clever if we are to somehow to bring everyone along in this transition. Let us hope that COP21 proves to be an important step in the right direction.

Why I Joined the People’s Climate March by Brendan Barrett is licensed under a Creative Commons Attribution-NonCommercial-ShareAlike 4.0 International License.

COP15 to COP21 – Crucial Changes in the Climate Mitigation Landscape