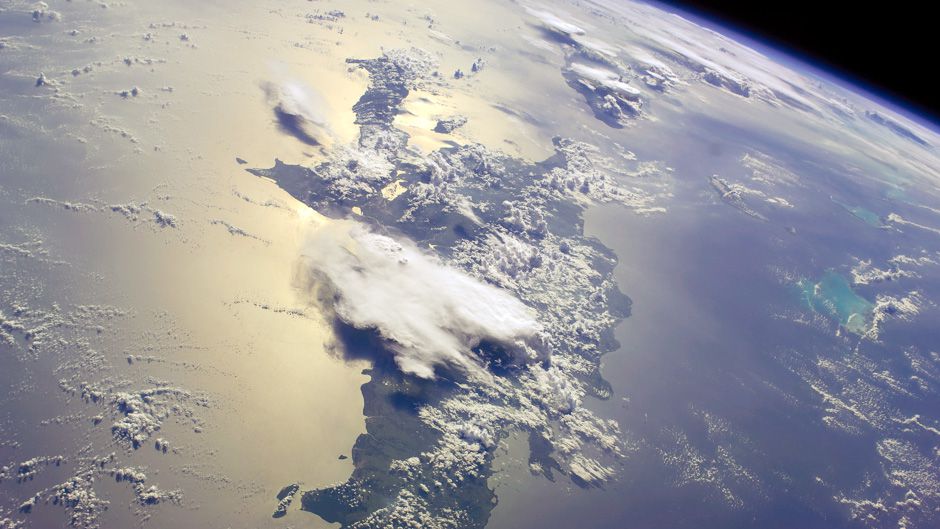 This essay was originally published on TomDispatch and is republished here with the kind permission of Tom Engelhardt, who is also the author of the brief introduction.

Two Saturdays ago, I was walking with a friend in a park here in New York City. It was late January, but I was dressed in a light sweater and a thin fall jacket, which I had just taken off and tied around my waist. We were passing a strip of bare ground when suddenly we both did a double-take. He looked at me and said, “Crocuses!”  Dumbfounded, I replied, “Yes, I see them.”

And there they were, a few clumps of tell-tale green shoots poking up from the all-brown ground as if it were spring. Such a common, comforting sight, but it sent a chill through me that noticeably wasn’t in the air. Even the flowers, I thought, are confused by our new version of weather.

Later that same week, as temperatures in the Big Apple crested 60 degrees, I was chatting on the phone with a friend in Northampton, Massachusetts. I was telling him about the crocuses, when he suddenly said, “I’m looking out my window right now and for the first time in my memory of January, there’s not a trace of snow!”

Of course, our tales couldn’t be more minor or anecdotal, even if the temperatures that week did feel like we were on another planet. Here’s the thing, though: after a while, even anecdotes add up — maybe we should start calling them “extreme anecdotes” — and right now there are so many of them being recounted across the planet. How could there not be in a winter, now sometimes referred to as “Junuary,” in which, in the United States, 2,890 daily high temperature records have either been broken or tied at last count, with the numbers still rising?

Meanwhile, just to the south of us, in Mexico, extreme anecdotes abound, since parts of the country are experiencing “the worst drought on record”.  Even cacti are reportedly wilting and some towns are running out of water (as they are across the border in drought-stricken Texas). And worst of all, the Mexican drought is expected to intensify in the months to come.

And who can doubt that in Europe, experiencing an extreme cold spell the likes of which hasn’t been seen in decades — even Rome had a rare snowfall and Venice’s canals were reported to be freezing over — there are another set of all-too-extreme anecdotes. After all, in places like Ukraine, scores of the homeless are freezing to death, pipes are bursting, power cuts are growing, and maybe even an instant energy crisis is underway (at a moment when the European Union is getting ready to cut itself off from Iranian oil).

That’s just to begin a list. And yet here’s the strange thing. At least in this country, you can read the “freaky” weather reports or listen to the breathless TV accounts of unexpected tornadoes striking the South in January and rarely catch a mention of the phrase “climate change”.  Given the circumstances, the relative silence on the subject is little short of eerie, even if worries about climate change lurk just below the surface. Which is why it’s good to have TomDispatch regular Bill McKibben, author of Eaarth: Making a Life on a Tough New Planet, take a clear-eyed look at American denialism and just what it is we prefer not to take in.

If we could see the world with a particularly illuminating set of spectacles, one of its most prominent features at the moment would be a giant carbon bubble, whose bursting someday will make the housing bubble of 2007 look like a lark. As yet — as we shall see — it’s unfortunately largely invisible to us.

In compensation, though, we have some truly beautiful images made possible by new technology. Last month, for instance, NASA updated the most iconic photograph in our civilization’s gallery: “Blue Marble,” originally taken from Apollo 17 in 1972. The spectacular new high-def image shows a picture of the Americas on January 4th, a good day for snapping photos because there weren’t many clouds.

It was also a good day because of the striking way it could demonstrate to us just how much the planet has changed in 40 years. As Jeff Masters, the web’s most widely read meteorologist, explains, “The US and Canada are virtually snow-free and cloud-free, which is extremely rare for a January day. The lack of snow in the mountains of the Western US is particularly unusual. I doubt one could find a January day this cloud-free with so little snow on the ground throughout the entire satellite record, going back to the early 1960s.”

In fact, it’s likely that the week that photo was taken will prove “the driest first week in recorded US history”. Indeed, it followed in 2011, which showed the greatest weather extremes in our history — 56% of the country was either in drought or flood, which was no surprise since “climate change science predicts wet areas will tend to get wetter and dry areas will tend to get drier.” The nation suffered 14 weather disasters each causing $1 billion or more in damage last year. (The old record was nine.) Masters again: “Watching the weather over the past two years has been like watching a famous baseball hitter on steroids.”

In the face of such data — statistics that you can duplicate for almost every region of the planet — you’d think we’d already be in an all-out effort to do something about climate change. Instead, we’re witnessing an all-out effort to… deny there’s a problem.

Our GOP presidential candidates are working hard to make sure no one thinks they’d appease chemistry and physics. At the last Republican debate in Florida, Rick Santorum insisted that he should be the nominee because he’d caught on earlier than Newt or Mitt to the global warming “hoax.”

Most of the media pays remarkably little attention to what’s happening. Coverage of global warming has dipped 40% over the last two years. When, say, there’s a rare outbreak of January tornadoes, TV anchors politely discuss “extreme weather,” but climate change is the disaster that dare not speak its name.

And when they do break their silence, some of our elite organs are happy to indulge in outright denial. Last month, for instance, the Wall Street Journal published an op-ed by “16 scientists and engineers” headlined “No Need to Panic About Global Warming.” The article was easily debunked. It was nothing but a mash-up of long-since-disproved arguments by people who turned out mostly not to be climate scientists at all, quoting other scientists who immediately said their actual work showed just the opposite.

It’s no secret where this denialism comes from: the fossil fuel industry pays for it. (Of the 16 authors of the Journal article, for instance, five had had ties to Exxon.) Writers from Ross Gelbspan to Naomi Oreskes have made this case with such overwhelming power that no one even really tries denying it any more. The open question is why the industry persists in denial in the face of an endless body of fact showing climate change is the greatest danger we’ve ever faced.

Why doesn’t it fold the way the tobacco industry eventually did? Why doesn’t it invest its riches in things like solar panels and so profit handsomely from the next generation of energy? As it happens, the answer is more interesting than you might think.

In ecological terms it would be extremely prudent to write off $20 trillion worth of fossil fuel reserves. In economic terms, of course, it would be a disaster, first and foremost for shareholders and executives of companies like ExxonMobil.

Part of it’s simple enough: the giant energy companies are making so much money right now that they can’t stop gorging themselves. ExxonMobil, year after year, pulls in more money than any company in history. Chevron’s not far behind. Everyone in the business is swimming in money.

Still, they could theoretically invest all that cash in new clean technology or research and development for the same. As it happens, though, they’ve got a deeper problem, one that’s become clear only in the last few years. Put briefly: their value is largely based on fossil-fuel reserves that won’t be burned if we ever take global warming seriously.

When I talked about a carbon bubble at the beginning of this essay, this is what I meant. Here are some of the relevant numbers, courtesy of the Capital Institute: we’re already seeing widespread climate disruption, but if we want to avoid utter, civilization-shaking disaster, many scientists have pointed to a two-degree rise in global temperatures as the most we could possibly deal with.

If we spew 565 gigatons more carbon into the atmosphere, we’ll quite possibly go right past that reddest of red lines. But the oil companies, private and state-owned, have current reserves on the books equivalent to 2,795 gigatons — five times more than we can ever safely burn. It has to stay in the ground.

Put another way, in ecological terms it would be extremely prudent to write off $20 trillion worth of those reserves. In economic terms, of course, it would be a disaster, first and foremost for shareholders and executives of companies like ExxonMobil (and people in places like Venezuela).

If you run an oil company, this sort of write-off is the disastrous future staring you in the face as soon as climate change is taken as seriously as it should be, and that’s far scarier than drought and flood. It’s why you’ll do anything — including fund an endless campaigns of lies — to avoid coming to terms with its reality. So instead, we simply charge ahead. To take just one example, last month the boss of the US Chamber of Commerce, Thomas Donohue, called for burning all the country’s newly discovered coal, gas, and oil — believed to be 1,800 gigatons worth of carbon from our nation alone.

The fossil-fuel companies, with their heavily funded denialism and their record campaign contributions, have been able to keep at bay even the tamest efforts at reining in carbon emissions.

What he and the rest of the energy-industrial elite are denying, in other words, is that the business models at the center of our economy are in the deepest possible conflict with physics and chemistry. The carbon bubble that looms over our world needs to be deflated soon. As with our fiscal crisis, failure to do so will cause enormous pain — pain, in fact, almost beyond imagining. After all, if you think banks are too big to fail, consider the climate as a whole and imagine the nature of the bailout that would face us when that bubble finally bursts.

Unfortunately, it won’t burst by itself — not in time, anyway. The fossil-fuel companies, with their heavily funded denialism and their record campaign contributions, have been able to keep at bay even the tamest efforts at reining in carbon emissions. With each passing day, they’re leveraging us deeper into an unpayable carbon debt — and with each passing day, they’re raking in unimaginable returns. ExxonMobil last week reported its 2011 profits at $41 billion, the second highest of all time. Do you wonder who owns the record? That would be ExxonMobil in 2008 at $45 billion.

Telling the truth about climate change would require pulling away the biggest punchbowl in history, right when the party is in full swing. That’s why the fight is so pitched. That’s why those of us battling for the future need to raise our game. And it’s why that view from the satellites, however beautiful from a distance, is likely to become ever harder to recognize as our home planet.

Bill McKibben is Schumann Distinguished Scholar at Middlebury College, founder of the global climate campaign 350.org, a regular contributor to TomDispatch, and the author, most recently, of Eaarth: Making a Life on a Tough New Planet.