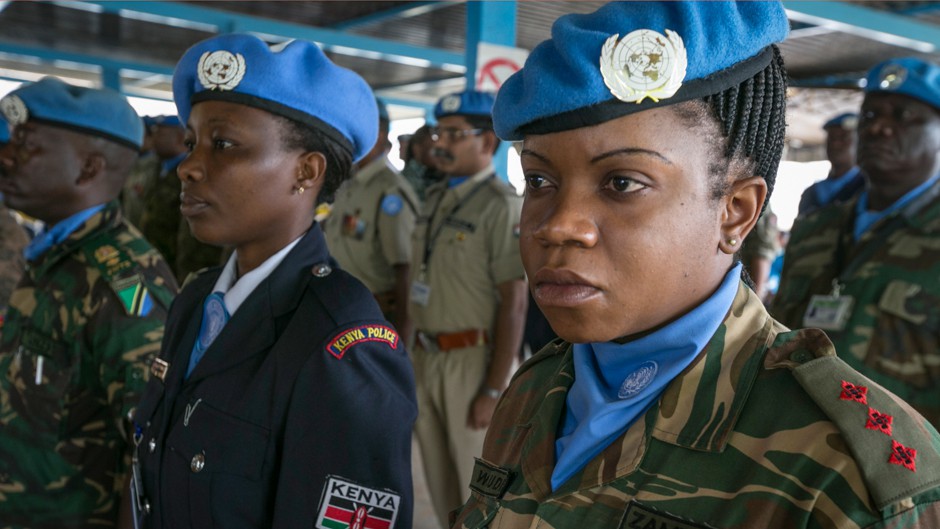 An extensive history of achievement in a male-dominated arena, Major General Lund has over 34 years of military experience at national and international levels. In 1991 she was deployed during Operation Desert Storm to Saudi Arabia and then in Afghanistan at the North Atlantic Treaty Organization’s International Security Assistance Force Headquarters. In 2009 she was promoted to the rank of Major General and then Chief of Staff of the Norwegian Home Guard — the first female officer to be promoted to such positions. Her experience in the UN includes her service with the UN Interim Force in Lebanon and the UN Protection Force in the Former Yugoslavia.

Major General Lund’s appointment is the first major acknowledgement of the implementation of the year 2000 UN Security Council resolution 1325 on women, peace and security. That resolution highlighted a shift in UN policy to engage more females in peacekeeping operations around the world. It affirmed the role of women in prevention and resolution of conflicts, negotiations, peacekeeping, humanitarian responses and post-conflict reconstruction. Further, it stressed the need to integrate a gender perspective in these areas including peacekeeping operations.

According to Herve Ladsous, Head of UN Peacekeeping, “Women can and must play a leading role in political participation, conflict resolution and the transition from conflict to peace.”

However, this falls far short of gender equality in peacekeeping missions. In a paper by the International Peace Institute, Sahana Dharmapuri argues that the reason for this is threefold: the lack of understanding among member states about Resolution 1325 and UN policy on gender equality in peace operations; a gap in data and analysis about women’s participation in national security institutions globally, and in UN peacekeeping in particular; and the prevalence of social norms and biases that perpetuate gender inequality within the security sector.

“Being a female, from my recent deployment in Afghanistan, I had access to 100 percent of the population, not only 50 percent.” – Major General Kristin Lund

Unfortunately, debate regarding female soldiers appears to be more on their role in combat rather than a focus on how best to utilize the strengths of female officers in peacekeeping operations.

Yet, it appears there may be specific roles that are better suited to female officers than their male counterparts. Major General Lund has pointed out one important advantage that female peacekeepers have: “Being a female, from my recent deployment in Afghanistan, I had access to 100 percent of the population, not only 50 percent”. Access to the local population becomes particularly relevant when considering the current nature of conflicts in which UN peacekeepers find themselves.

Most peacekeeping operations are mandated to protect civilians under imminent threat of danger, yet in practice this is both a daunting and immensely challenging task. Take for example, MONUSCO, the UN mission in the Democratic Republic of the Congo (DRC). This mission has to protect civilians over a territory the size of Western Europe from approximately 40 armed groups that roam and often terrorize local populations.

For peacekeeping operations to be able to better protect civilians, they need comprehensive intelligence gathering capabilities, which, unfortunately, most missions are sorely lacking. Accurate intelligence is vital for peacekeeping operations. Mission leaders and Force Commanders need to be able to map threats and identify armed groups and their leaders for effective planning. They need to analyze their types, motivations, behaviours and goals and understand the context in which these armed groups evolve and operate.

One important way to gather this intelligence is through information collected by human sources. In a peacekeeping operation one source of this information is from local populations and local resistance groups.

Female peacekeepers can fill a gap by providing women and children with a greater sense of security, but also by being able to foster their trust and in the process gather valuable information for the mission.

The need to establish rapport with the local population is therefore vital, not only for intelligence gathering, but also to implement early warning systems, conduct capacity building and build trust. However, as women and children are the main victims of violence in such conflicts, particularly sexual violence, it is often difficult for male soldiers to cross social and cultural boundaries required to build this trust. This is where female peacekeepers can fill a gap by providing women and children with a greater sense of security, but also by being able to foster their trust and in the process gather valuable information for the mission.

Studies conducted by the UN in support of resolution 1325, from experience in operations in Cambodia, Kosovo, Timor Leste, Afghanistan, Liberia and the DRC, demonstrated that female soldiers do not face the same cultural restrictions as their male counterparts and are able to gain information from women and children. This ability to gain trust of local populations should be considered a vital component of any peacekeeping operation.

In fact, in Afghanistan, ‘Female Engagement Teams’ were able to penetrate the conservative male-dominated society by regularly interacting with local women, gaining their trust until they were willing to share valuable information about areas where the Taliban were recruiting.

In the DRC the UN actively employs unmanned aerial vehicles as part of its intelligence gathering capabilities. The ability to fully and accurately synthesize this information can only be done with supported human intelligence. With resource and budget constraints of peacekeeping operations, the UN must look to use more effectively the non-combatant elements of its mission. Better intelligence and improved trust and credibility gained by female peacekeepers through interaction with the local population helps to reduce conflict and confrontation. Improved intelligence can also increase not only a mission’s ability to protect civilians but also protect its own personnel by using such knowledge to reduce peacekeepers’ exposure to ambushes and other unconventional attacks by armed groups.

For Major General Lund her hope is that she “can also be a female role model for other female officers to see that it is possible”.  More than possible one would imagine.

Why the United Nations Needs More Female Peacekeepers by Alexandra Ivanovic is licensed under a Creative Commons Attribution-NonCommercial-ShareAlike 4.0 International License.

Alexandra Ivanovic holds a Bachelor of Law/Commerce degree from the University of New South Wales in Australia and a Master of Science in Sustainability, Development and Peace from the United Nations University. She has worked as a lawyer, community mediator and has operated a number of small businesses in Australia. She has a strong interest in conflict resolution, peacekeeping, development issues and the environment. Alexandra currently works as a researcher with UNU.