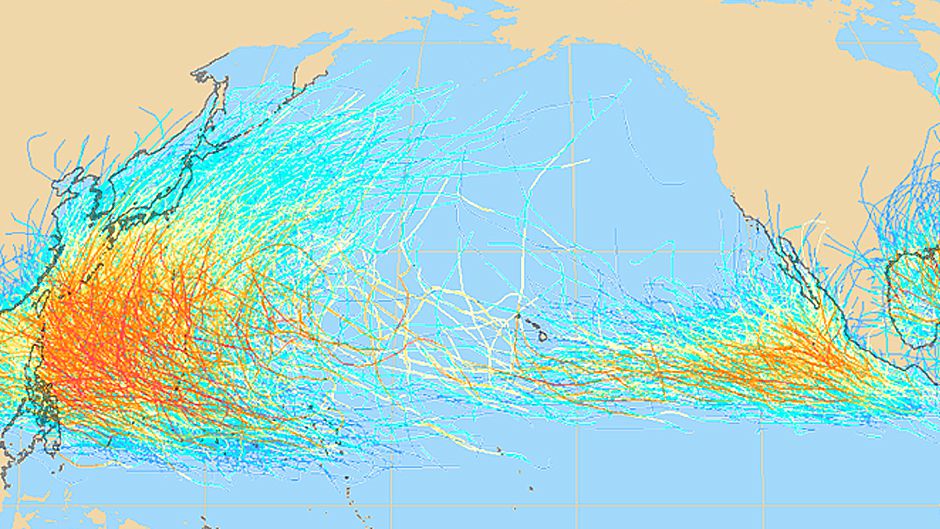 Climate change is set to cause some of the 21st century’s chief challenges. Among these are fears that rising sea temperatures will provoke an increase in the frequency and intensity of weather events, such as tropical cyclones.

The term “tropical cyclone” describes a closed atmospheric circulation that forms over warm oceans. When the sustained maximum wind speed of such storm systems exceeds 119 km per hour, they are called typhoons in the Pacific Ocean, hurricanes in the Atlantic Ocean, and cyclones elsewhere.

Many factors influence tropical cyclone behaviour. While there is debate among scientists as to just how much global warming is to blame, governments need to consider the worst-case scenarios so as to mitigate and prepare.

Japan is extremely vulnerable to tropical storms, experiencing an average of 26.7 annually for the past 30 years. The country therefore already experiences much physical damage and other indirect economic consequences. It is important to understand how the amount of time and money lost due to these phenomena could increase.

Recent computer simulation work at the United Nations University Institute of Advanced Studies (UNU-IAS) aims to gauge such indirect effects on the Japanese economy in the face of possibly bigger typhoons. Much of the existing research focuses on the physical damage without calculating the non-direct effects, such as disruption of transportation and industrial systems.

Therefore the key indicator in the UNU-IAS model is the average amount of hours lost, because — as anybody who lives in tropical cyclone zone knows — when a typhoon hits, virtually all transport, industry and commerce come to a stop. Essentially, as citizens are forced to take shelter, the economic productivity of the country dramatically decreases.

A direct comparison between the control scenario (no climate change) and two climate change scenarios used in the simulation (based on different parameters on how typhoons can be expected to grow) shows that the northern areas of Japan will increasingly suffer economic downtime due to typhoons.

This is because an increase in surface sea temperatures will result in tropical cyclones keeping their strength over a longer distance as they travel north, resulting in higher latitude regions becoming affected (see figure). 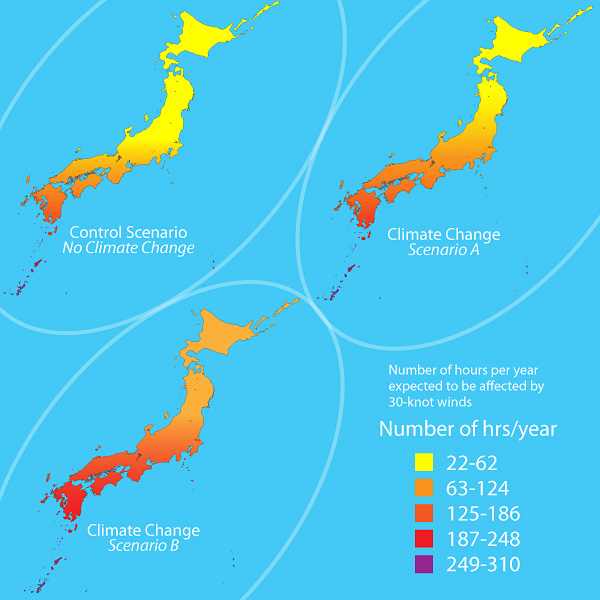 Ports would be hard hit

Japan’s typhoon season lasts from around July to September, and most port downtime usually occurs during these months. In the scenarios above, the average period during which Japan’s ports will be unable to operate due to high winds is expected to increase by between 18% and 43%.

An 18% increase on the seasonal downtime already experienced would have a rather severe effect, especially for the southernmost regions, and would be quite dramatic in the case of Naha Port, in Okinawa.

Rise in downtime would bite into GDP

According to the results of our simulation, the annual economic damage due to periods of typhoon-caused inactivity could amount to 0.15 percent of Japanese GDP in the year 2085 (based on 1990 GDP figures). If this were to happen to the Japanese economy as it is today, it would mean a loss of more than ¥687 billion (US$7 billion, or the equivalent of US$60 per capita) every year from typhoons alone.

This future potential for loss is high in urban areas due to economic and demographic developments. More people and economic assets will be exposed to natural hazards in particularly risky coastal urban areas as a result of population growth driven by the relatively attractive economic conditions of these regions.

What it all means

Across the globe scientists and economists are working to measure the economic consequences of climate change mitigation and adaptation. The Stern Review on the Economics of Climate Change claims that “the overall costs and risks of climate change will be equivalent to losing at least 5% of global GDP each year, now and forever. If a wider range of risks and impacts is taken into account, the estimates of damage could rise to 20% of GDP or more.”

Of course climate change is not a precise science and how typhoon patterns will change in the future remains unknown. Our work assumes they will change according to the results of a 2004 study by Knutson and Tuleya, who predict a 6% increase in surface wind speed by 2085, due to a +0.8 to +2.4 degrees Celsius rise in surface sea temperature. However, some scientists are now predicting even bigger increases in temperatures by the end of the century.

The work carried out at UNU-IAS aims to provide a more detailed assessment of the overall cost of climate change than did Stern’s more general approach. The simulation results show that adaptation measures, such as designing more robust ports and harbour structures, will indeed be economically prudent in the future.

They also show a clear case for investing more money in renewable energies and cutting greenhouse gas emissions. As one of the countries most likely to suffer the negative effects of climate change, Japan should take the lead in doing this. Essentially every yen spent now might contribute to alleviating this potential increase in typhoon strength, and hence future economic losses, while providing jobs and stimulating Japan’s currently dire economic situation.