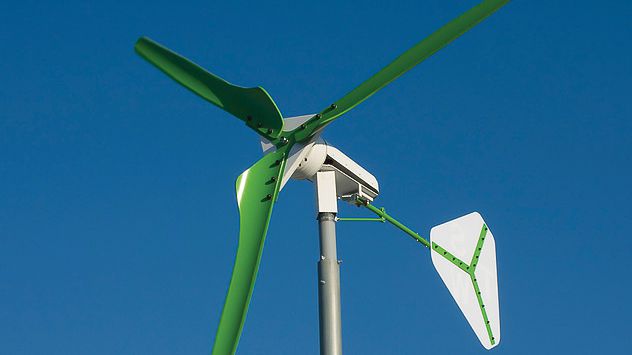 As the roll-out of renewable energies gathers pace, large-scale wind parks are cropping up around the world. Whereas some 30 years ago a standard wind turbine might have had the capacity to generate between 10 and 100 kilowatt hours (kWh) of electricity, today turbines in Europe, China, and the United States typically generate 5,000  kWh of electricity.

And designs are getting even bigger. The EU-backed UpWind project is shooting for a 20,000 kWh turbine that can supply enough power for between 15,000 to 20,000 households. Many of these beasts are destined for offshore wind parks, where their size is less likely to impact local communities.

Yet such installations still require immense feats of engineering — especially at sea. So some engineers are trying to solve the problem of harnessing energy sustainably by tacking in the opposite direction: They’re thinking small.

The benefit of this kind of micro generation is that it can be deployed in so many places and — in certain situations — can be the cheapest energy in town. Small turbines of around 10-100 KW can be attached to houses, schools, industrial facilities and even boats and they have enjoyed their most success to date in developing countries.

China is the world’s leader when it comes to building and installing small wind turbines. So far some 1.75 million Chinese have been connected to electricity this way. China has eight million people living without electricity, and the wind power market is rushing to fill the gap, according to Chen Dechang, a spokesperson for a Chinese wind industry association. Some 130,000 small wind turbines were built in China last year, he said. In remote, windy regions far from centralized power plants, small wind turbines can offer the least expensive form of power.

[quote quote=”Micro wind technology offers the possibility of reducing poverty without emissions. Some 1.5 billion humans live without electricity and many can be found in remote rural communities where access to a national grid is prohibitively expensive.” type=”text” ]

Indeed, the technology offers the possibility of reducing poverty without growing greenhouse gas emissions. Some 1.5 billion humans live without electricity worldwide and many can be found in remote rural communities where access to a national grid is prohibitively expensive.

So far, China has enjoyed an edge in the manufacturing small turbines because of its combination of low manufacturing costs and relatively large share of remote customers seeking local energy solutions.

Interest in the West

Yet China isn’t the only nation to take an interest in this technology. Even in industrialized countries, where developed grid infrastructure means small wind turbines are less able to compete with their larger cousins let alone fossil fuels, rising energy costs and a push for energy independence is spurring the industry.

The US is currently home to the largest producers of small wind turbines, and they both export their products and sell them domestically. According to the American Wind Energy Association (AWEA), the number of installed micro wind turbines has doubled during the last three years. The organization expects they will have quadrupled by 2015. That amount of capacity would be the equivalent of one nuclear plant’s energy output.

[quote quote=”According to the American Wind Energy Association (AWEA), the number of installed micro wind turbines has doubled during the last three years. The organization expects they will have quadrupled by 2015.” type=”text” ]

Although several European countries, most notably Germany, have been pioneering feed-in tariffs to drive investment in clean energies, ‘small wind’ has typically been at a disadvantage compared to ‘big wind’ to date, and has been unable to secure its own separate tariffs.

Yet that’s changing. The UK became one of the first major industrialized countries to promote energy from small wind turbines with a feed-in tariff last year. Since then, electricity from a certified facility in Great Britain has been compensated with 17 to 38 euro cents per kilowatt hour (kWh) for the electricity it feeds back into the grid with small wind power — a lucrative prospect in this windswept region of Europe. Elsewhere the mood is changing too. An investment in a small wind turbine in Denmark can net a homeowner 28 cents per kWh.

Meanwhile, wind power associations in Spain, Portugal, Ireland and Germany are lobbying their governments to establish similar rates for feed-in tariffs. The German Wind Energy Association is hoping for 15 to 22 cents per kWh.

Experts say that once tariffs make investment in small wind power lucrative, conditions will be right for another boom in renewable energies.

Of course, challenges remain. The industry is still small and fragmented compared to its larger cousin. There are hundreds of manufacturers around the world and most are unable to churn out units on an industrial scale.

Standards are also scarce, suggesting the industry will still need to go through a period of consolidation before it really begins to get noticed on the renewable energy scene.

Another problem also lies in measuring wind conditions accurately. Because customers for small turbines cannot typically field an army of specialists to measure wind conditions, overestimation of local conditions has led to disappointment among many small wind turbine owners. That’s something national and international wind power associations say they hope to change though improved quality controls and better information for the public.

Since 2002 Gero Rueter has been a radio and online editor at Deutsche Welle. In this position he developed a European environmental magazine. Previously he was editor and writer for the Spanish-language TV magazine Europe Semanal and also did investigative TV reports for consumer magazines such as Plus-Minus and Market. In 2000 he was awarded the German Business Film Prize.