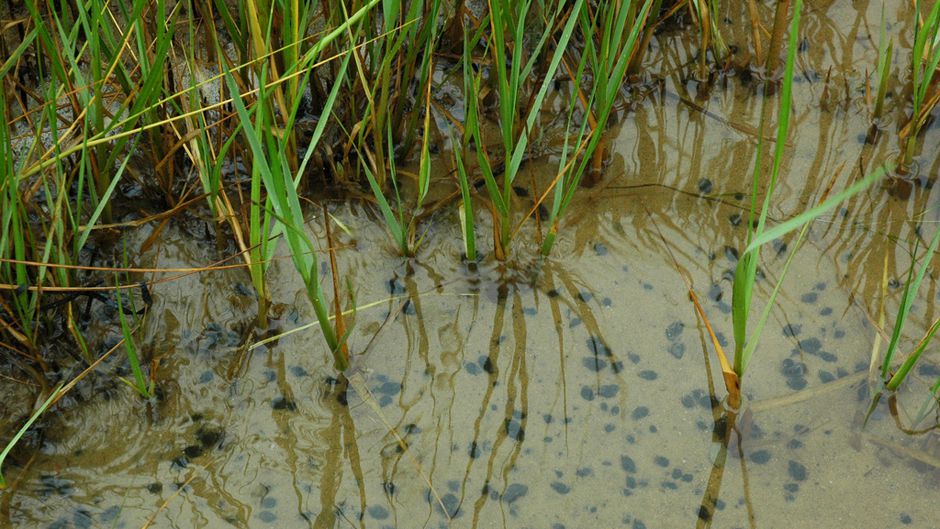 A marathon summer of field work by Mark Bertness, professor of ecology and evolutionary biology and a squadron of students may finally help settle the heated debate about what’s killing the coastal saltmarshes of southern New England and Long Island. The group’s work has yielded two new papers that offer clear evidence of the cause.

Hungry crabs, left unchecked by a lack of predators, are eating the cordgrass — and wreaking havoc — in coastal saltmarshes from Long Island to Cape Cod.

In one paper, published in PLOS ONE, researchers provide the results of numerous measurements at 14 sites around Rhode Island’s Narragansett Bay. They sought correlations between the extent of marsh death and evidence of any of several popular hypotheses. The winner by far was runaway herbivory of cordgrass by the Sesarma crab.

In the other study, published in Ecology Letters, they directly tested that hypothesis with experiments on Cape Cod. The results were that wherever they protected Sesarma from the pressure of predators, the crabs ruthlessly mowed the grasses down.

Both papers back up the explanation that Sesarma are ravaging the marshes because overfishing has reduced the predators that would naturally keep the crabs in check. Long-held beliefs that physical forces, rather than disrupted food webs, are killing the marshes just aren’t true, says Mark Bertness, professor of ecology and evolutionary biology at Brown University.

“These are very deeply embedded paradigms and dogma,” Bertness says. “But the conservation implications of this are enormous, so at some point in time people have to set that aside and look at this objectively.”

The team divided their time between Rhode Island and Cape Cod from May to August, often working from 3 a.m. into the early evening. 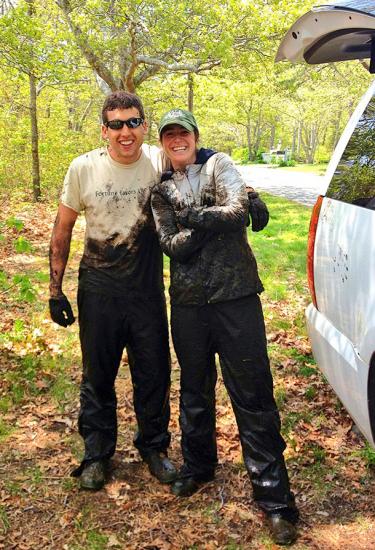 Seniors Matt Bevil and Sinead Crotty, like the rest of the research team, faced a marathon of mud during the summer. Their work yielded two published papers and answered many questions about salt marsh destruction in the Northeast. Photo: Bertness lab/Brown University.

In Narragansett Bay they ran several tests during the summer at sites where die-off ranged from less than 5 percent to 98 percent. They determined the extent and progress of marsh death by examining aerial images of the sites from 1997, 2003, 2008, and 2012.

To gather data about whether tides were eroding the marshes away, the researchers made chalk blocks and placed them at each site so they could watch how quickly they dissolved. To determine whether local growing conditions were poor for the grasses, they planted healthy grass in each site and then protected it from all herbivores, including the crabs. To assess whether any site had too much nitrogen, they took leaves of the grasses at each site back to the lab, ground them up and analyzed their chemistry.

Number crunching revealed that differences in herbivory at each site explained 73 percent of the variation in die-off from at each site.

In the second week in July, they measured herbivory at each site by walking a 20-meter line at each site and then stopping every two meters to measure signs of crab damage on 100 cordgrass stalks.

Later in July they measured Sesarma populations (based on how many they could trap). In August they tethered crabs to make them more vulnerable to predators and measured how much predation there was.

They even measured how hard the marsh soil was at each site.

When fall came, they analyzed all the data. The number crunching revealed that differences in herbivory at each site explained 73 percent of the variation in die-off from at each site.

The only other significant factor was the hardness of the soil. Why would that matter? “Substrate hardness influences crab herbivory by limiting crab burrowing in hard and soft substrates, leading to a peak in herbivory in medium hardness substrates where burrows can be easily constructed and maintained,” they write in PLOS ONE.

Meanwhile on Cape Cod, the group did many of the same things (chalk blocks, nitrogen measurements, tests for growing conditions), but they also implemented a direct test of the Sesarma herbivory hypothesis. They erected cages on some plots that could protect the crabs from predators. As controls for the experiment, they put cages on some patches that didn’t exclude predators and left other patches marked only with marker posts. 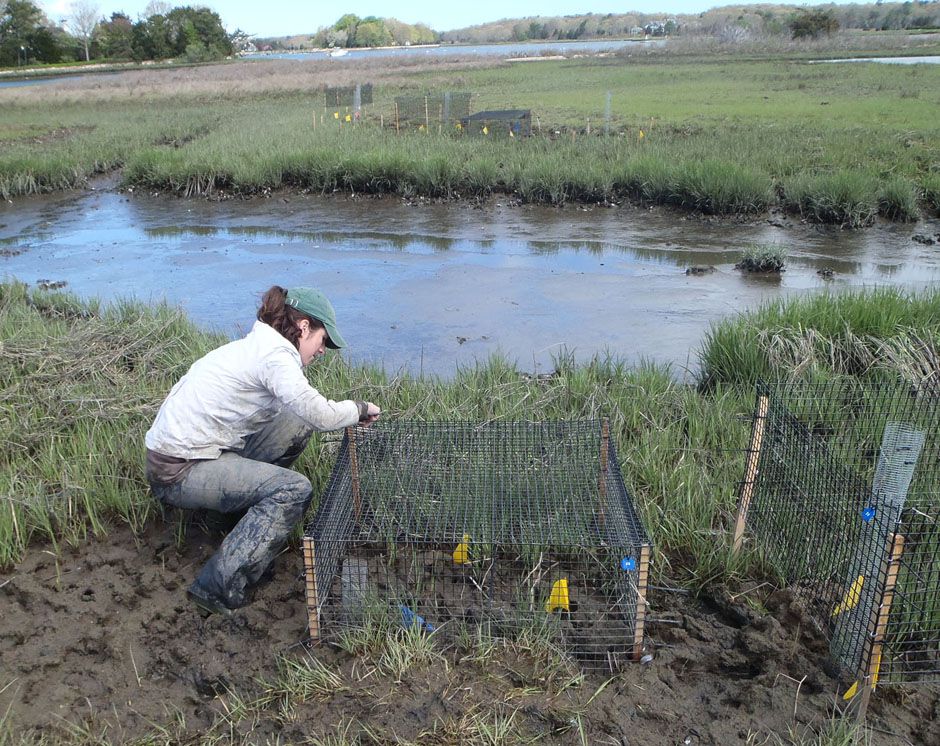 If the team was right about Sesarma herbivory thriving in the absence of predator threats, then the marsh should surely suffer much more in the plots where cages shielded the burrowing Sesarma crabs from all their above-ground foes.

Excluding predators for a single growing season led to a more than 150-percent increase in unvegetated bare space in comparison to control plots.

There are still experiments the team would like to do to further understand the ecosystem dynamics that lead to the marsh die-off, but next summer the Bertness lab will also focus on determining what the marsh loss to excess herbivory could mean.

“We’re moving on as well in Narragansett Bay and in Cape Cod to look at sea level rise and die-off under the assumption that these are the mechanisms that are causing it,” says undergraduate coauthor Sinead Crotty. “Combining impacts that we should see in the future, what does die-off mean for the future of marshes?”

It’s a problem that, properly understood, must now be managed.

The National Science Foundation and the Voss Environmental Fellowship Program supported the research in each paper.

Without Predators, Hungry Crabs Kill Saltmarshes by David Orenstein-Brown is licensed under a Creative Commons Attribution-NonCommercial-NoDerivatives 4.0 International License.
Based on a work at Fururity.
Permissions beyond the scope of this license may be available at Brown University.