Women Fight Too, so Stop Ignoring Them in Peacebuilding 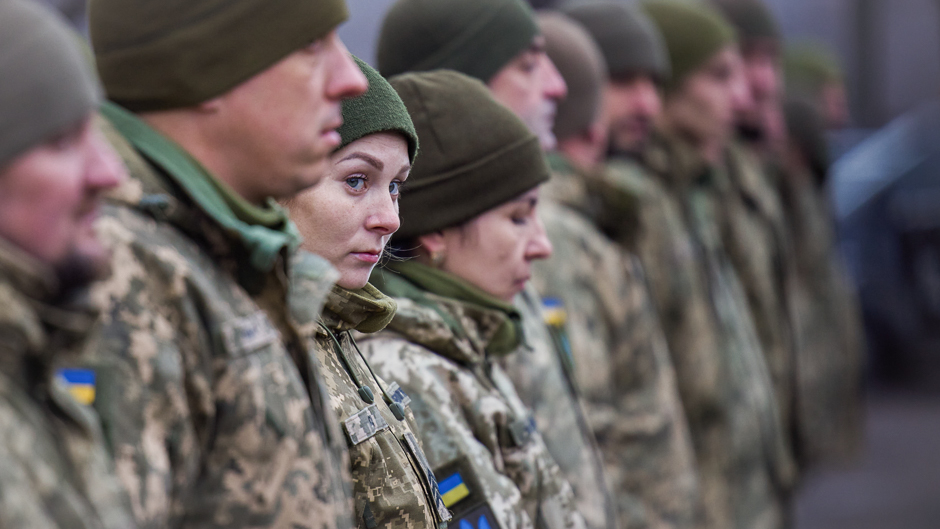 Ceremony on the occasion of the 30th anniversary of the Armed Forces of Ukraine. Photo: President of Ukraine, Creative Commons CC0 1.0 Public Domain

For a while, Alina Mykhailova’s Instagram account was pretty typical for a European twenty-something. A photo in a sparkling dress one New Year’s Eve, vacation shots, and occasional glimpses into her work as a Kyiv city council member.

Until, that is, she went to war as a member of the Ukrainian armed forces and photographed her experiences.

In March 2022, Alina returned to the front lines after two years as a civilian. In pictures of shelled buildings and patrols, she documented her return to the battlefield, recounting how “the semi-savage, nomadic life of the war was very quickly remembered”.

Alina’s story is not unique. Many women serve in the Ukrainian forces or volunteered to join the fight against Russia. Recent statistics suggest that women comprise nearly 25% of Ukraine’s military.

It may seem premature to discuss disarmament or demobilisation when a country is in the throes of a raging conflict, but if Ukraine’s women are to be part of the conflict’s resolution and the peacebuilding processes that follow, we need to be highlighting their roles and needs now.

And this needs to extend to other conflicts around the world, where women are active combatants, or serve in other, important, auxiliary roles: because their priorities and aspirations are often neglected when it comes to the post-conflict transition.

Last month, the international community discussed the progress made since the adoption of the landmark Security Council Resolution 1325 on Women, Peace, and Security. We are reminded that sustainable peace requires social and political conditions that enable gender equality, including through women’s participation in peacebuilding processes at all levels — from the governing centre to the community.

There has been a growing emphasis on the need to move away from mere “inclusion” — in which women are tangentially involved in transition efforts — towards full, equal, and meaningful participation, so that women can exercise equal roles as active agents in peacebuilding; whose needs and priorities are heard and addressed.

These design flaws mean that women are often not included in programmes from the outset, or, if they are included, the programmes are not designed in a gender-responsive way.

These calls are encouraging, but the international community’s track record of ensuring that individuals of all genders are included in conflict transitions has not been great. Efforts to restructure or demobilise the ranks of regular armed forces or armed groups are designed predominantly for men – which means women are less able to access, participate, or benefit from them.

Previous efforts have also rarely focused on the more informal roles that women often perform during conflict, including, for example, the support they provide as cooks and informants, or as members of community security organisations.

These design flaws mean that women are often not included in programmes from the outset, or, if they are included, the programmes are not designed in a gender-responsive way that takes both women’s experiences in war and their needs and aspirations upon exit into account.

Most interventions directly supported by the international community to demobilise and reintegrate ex-combatants after conflict have tended to involve non-state armed groups rather than state armed forces — which is a glaring omission.

While different from efforts to right size or restructure state militaries, examining these non-state armed group interventions is still instructive, both for considering the particular needs of women and the obstacles they face as they transition to civilian life.

Examining the history of such demobilisation programmes highlights how past efforts have fallen short of being not only truly open to women (and girls), but also failing to engage them as full participants in the conflict transition process.

In Nigeria, women who were associated with Boko Haram often received little support, even though they had several dependent children with them. However, their husbands, who were classified as fighters, were prioritised for support.

In Colombia, despite reintegration processes going back to the 1990s and earlier, MEAC found little evidence that gender considerations were taken into account to any meaningful extent until 2008.

This oversight is even more problematic when you consider the societal obstacles that women face in their efforts to stand down after conflict. Stigma and discrimination against women who have participated in war may inhibit their transition to civilian life and/or prevent them from fully participating in peacebuilding processes.

In this regard, MEAC found that women who had worked with self-defence forces in Nigeria were stigmatised simply because they wore trousers as part of their uniform, something their male counterparts did not have to endure.

In Colombia, women who had leadership roles in the Revolutionary Armed Forces of Colombia — People’s Army (FARC-EP) expressed frustration that their post-conflict options were limited due to gendered expectations about the roles they were expected to play within their families and wider society, such as caring for children, which hampered their political participation after the peace agreement.

This case highlights not only the gender-specific obstacles that women encounter in the transition to civilian life, but also the difficulties many women experience balancing multiple identities, including those of professionals and mothers.

Addressing their needs early during transitional planning, and incorporating lessons from elsewhere, means that women — both those in the thick of the action like Alina, and those playing more informal roles behind the front line — will no longer be an afterthought, and can equally shape the society that emerges once conflict ends.

This article was first published by The New Humanitarian. It is republished here with permission. Read the original article.

Why COVID-19 Offers a Chance to Transform UN Peacekeeping

UN Peacekeeping Cuts Could be a Disaster for Women and Girls