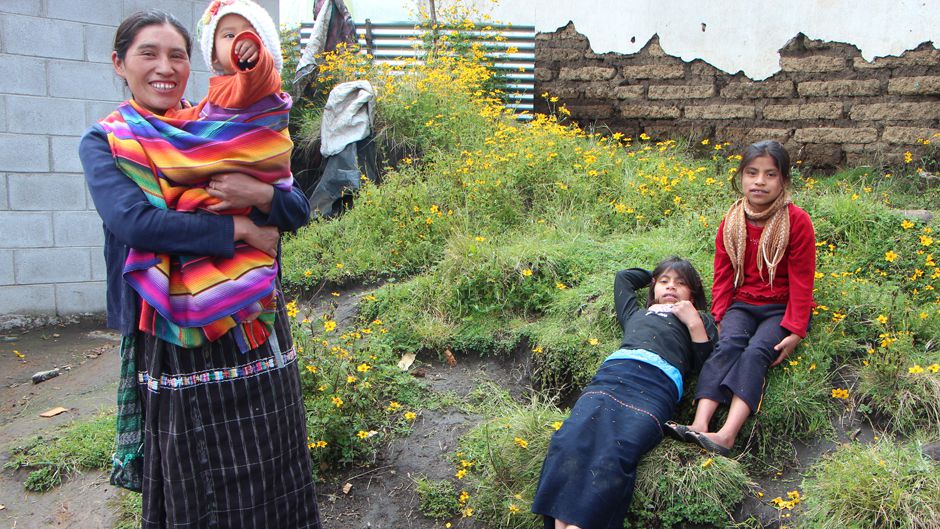 It is difficult to effectively capture with words the energy that flows within the movement of the Asociaciõn de Mujeres del Altiplano (Association of Women of the Highlands  — AMA). Nonetheless, I am simply going to dive in and write about my experience and the sentiment evoked in me by AMA’s work, which has also been influenced by stories shared with me by those involved with the organization.

About eight years ago, I was building stoves for Mayan women in the Guatemalan highlands as part of a ‘service learning’ (where service to the community is part of an educational programme) project with a US partner of AMA’s — the Highland Support Project (HSP). In the years since then, my relationship with the two organizations has strengthened as we have supported each other in empowerment activities in the United States and Guatemala. This time, I visited to capture some of what the local Mayan communities were accomplishing as well as to begin discussions on how to show, qualitatively, the change that has been occurring in an appropriate and respectful way.

AMA is an organization that, rather then trying to fix problems for people, strives to support them in finding their own paths forward. A federation of women from 13 Mayan communities surrounding Quetzaltenango — the second largest city in Guatemala, with an estimated population of 225,000 — AMA’s organizational structure is influenced by the cooperative movement and thus is based heavily on authentic participation. Myra, a veteran community facilitator and proud Mayan woman, noted that there is a particular mission “to empower women so that they may become independent as well as combat dependency. Dependency is not being able to move forward on your own — you have to rely on someone else, rely on an organization to give you tonight’s food.”

While non-profit organizations are an integral part of civil society, taking on the management of a complex and diverse range of activities, they face internal and external management issues and too often rely on top-down approaches without adequate emphasis on what is culturally appropriate or sustainable. 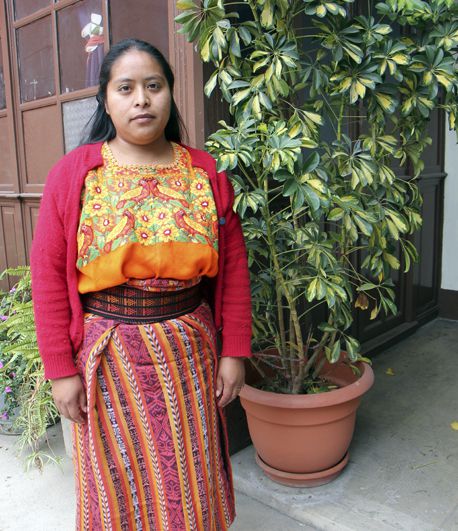 Myra, a veteran community facilitator and proud Mayan woman, believes in AMA’s mission. “We are helping without just giving things away and this is very important,” she says. Photo: Joe Molinari.

In Guatemala, and in much of the world, many non-profits focus on giving with no plan to support people in creating for themselves. Dependent relationships are created in that people become used to foreigners entering their communities with presents, which can end up negating the fact that the people are capable of creating something beautiful of their own and rob them of a sense of accomplishment. In many cases, the only thing such communities are missing is the opportunity to get started due the many political, racial, and environmental factors that Mayan people currently face.

AMA recognizes the potential within communities as well as the rights of individuals and groups to create their own destinies. But it is also cognizant of how strong foundational knowledge in various areas can be key in helping communities find sustainable livelihoods that contribute to both individual and community well-being. Thus the organization focuses on strengthening entrepreneurial skills, encouraging good administration, care of natural resources, community participation that includes all generations, respect of cultural, economic and social rights, and of values according to the Mayan worldview and system of government.

“I believe in the mission,” Myra continued, “The help goes directly to the community where it’s needed. Help comes in the form that it is being asked for — in productive projects. We are helping without just giving things away and this is very important. The way that AMA works with indigenous women… first the women, which is very important in machismo culture. And finding out and listening to what they want, which is usually to find a source of income. Often you don’t see that change with other kinds of organizations. The founders [of AMA and HSP] keep on fighting to bring more opportunity to communities. They don’t leave you alone in this fight.”

AMA often begins working with a community when a  (an organized group of local Mayan women) approaches them at their office in Quetzaltenango. Initial support from AMA includes programming about economic development, self-esteem and civic participation. The programming is incorporated into the already existing and culturally appropriate circle where community facilitators (local community leaders in action) bring in material that is tailored to the unique needs and wishes of the community.

Maria Paola is a new community facilitator and she told me how she became involved with AMA: “I was going to school at the time I joined the circle. I wanted to get rid of fear. I wanted to participate and enjoy time with other women. I had a fear of working alongside and sharing with other people. I had some of these experiences while I was studying but I wanted an opportunity to stand up and share with women who were not my classmates.”

In working with Paola’s circle, AMA supported by expanding the market for weavings, brought in requested skills training and has helped people in building community projects. Not only does this work enhance opportunity for community, but Paola noted, “Now I see the need for family, I see reality. I think it is really important that we all work together, that the family works together.”

Paola exudes a feeling of hope and belief in something better — a feeling that you can only get when around someone who has been a part of something meaningful.

That brand of fear is indeed a hurdle for women in this country that is ranked near the bottom of the Global Gender Gap Index and has struggled with high rates of violence against women.

“What I would really like is that we all come together to participate and to look for change,” Paola continued. She has developed an absolute conviction that positive change is possible despite whatever challenges arise. With a convincing stare she said, “On our own it’s hard to create change but with others, change is possible. Change might be small but there is a power.”

When I spend time with the people involved in the process that AMA sparks, I feel the energy of a growing community. In this community there is love, trust and magic. I asked Juana Ambrosia Ramirez, a leader of a community circle, what she thought of the process within AMA.

“I’m happy to participate in the groups,” she replied. “I enjoy the training, learning new things, the workshops and getting involved in the weaving for the weaving orders.” 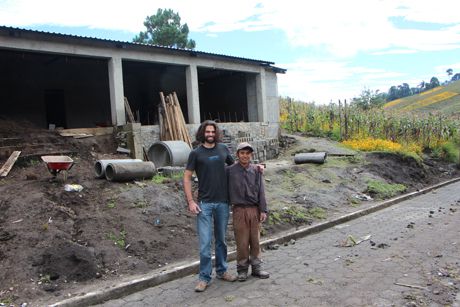 The author, Joe (left) with Miguel, a development project coordinator. “When we accomplished projects like building the road, it is the community that does all the work. If the entire community isn’t working then there is no development — there is no progress,” explains Miguel. Photo: Joe Molinari.

There was a joy in Juana’s circle meeting that day as children hung on their mothers and each other. Women discussed ongoing movement within AMA with bright eyes.

I love AMA because the process is a constant reminder that a bundle of sticks cannot be easily broken. Miguel, a development project coordinator, told me, “I haven’t studied but what I do have is the idea of working and working together. AMA puts their trust in me and I put my trust in them to complete these projects. Together, with AMA, we are looking for ways to develop the community.”

There is a promotion of equality and encouragement for all to be involved in change here. “We have a leadership group and there is also a women’s board of directors,” Miguel continued. “Men and women work together and we talk about the needs of the community. Together we look at the needs of the community and start to knock on the doors of helping organizations. When we accomplished projects like building the road, it is the community that does all the work. If the entire community isn’t working then there is no development — there is no progress.”

Miguel’s words have stuck with me. What is true development/empowerment/healing? My bias: Meaningful movement happens when we stop telling and start listening. People are intelligent and powerful in unique ways. If we take the time to develop meaningful and trusting relationships with communities that we wish to serve, maybe we will have the privilege of having a part in that movement. Though ultimately the movement is the movement of the people themselves. When people do this together and with transparency, it is truly beautiful.

Special thanks: In addition to the time granted by the good people credited above, thank you Ben and Lupe Blevins and Claudia Ramirez for the ongoing love, support, and comradeship. Quotes here are all from the English translation of my favorite translator, Simone Riddle.

If you are interested in knowing more about AMA check them out here. And if you’d like to know how to be involved in service learning projects with AMA and in other projects, check out Partners in Service, an organization that provides the most respectful and meaningful volunteer opportunities I’ve seen.

Women of the Highlands: Culturally Appropriate Empowerment in Guatemala by Joe Molinari is licensed under a Creative Commons Attribution-NonCommercial-ShareAlike 4.0 International License.
Permissions beyond the scope of this license may be available at Go To Be Found.

Joe Molinari is a licensed clinical social worker, psychotherapist, and avid explorer who believes in the inherent power within people and communities to create the future they want for themselves. He is dedicated to expanding the ways in which we understand healing in respectful and culturally appropriate ways. Joe grew up in Virginia, USA, though has more recently called Arizona home while working with Native American tribes.