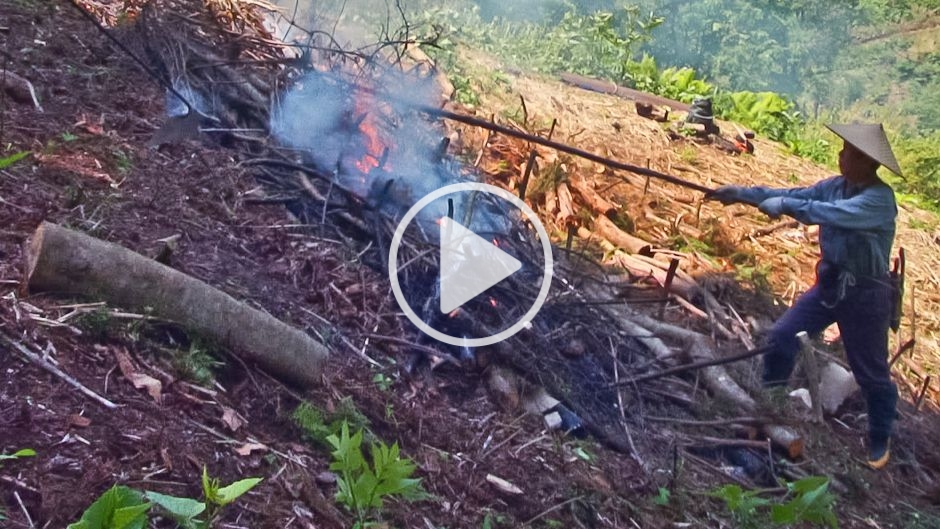 Many Japanese people probably think of yakihata (’burned field’ agriculture) as something of the past, or may even consider it primitive. It is not a familiar topic and most people have likely never seen it. Yet, surprisingly, yakihata still takes place around Japan today.

Just what is yakihata and why is it still important? Briefly, it is a Japanese form of swidden agriculture — an intricate process of clearing and burning forestland in mountainous regions to create agricultural land while using the wood ash as natural fertilizer. Its modern-day importance in Japan is explored in a book published in 2011, Yakihata no Kankyo-Gaku (Environmental Study of Swidden Agriculture), which summarizes the research results of the Yakihata Research Group’s Swidden Agriculture Team at Japan’s Research Institute for Humanity and Nature.

While addressing issues such as the non-sustainability of modern agriculture, depopulation of mountainous agricultural areas and modern lifestyles that have lost direct contact with nature, the Group discovered important lessons in yakihata and proceeded with research on its historical and present use.

For centuries yakihata was a common agricultural practice in Japan, until the early 1960s when modernized agriculture became common and a period of high economic growth provoked changes in Japan’s social structure. As a result, there are very few Japanese farmers today who incorporate yakihata into their work.

However, at the foot of Mount Hakusan in Ishikawa prefecture, although large-scale yakihata is no longer practiced, some people use the technique to grow root vegetable crops for themselves. Many of these people were relocated from their home environments in mountainous areas due to dam development and now live in urban regions such as Kanazawa. But on weekends, they visit the mountains to tend their crops using traditional methods, which do not rely on pesticides and fertilizer.

In Tsuruoka City, in Yamagata prefecture, dozens of yakihata farmers are still active. National Route 345, which passes through the city’s suburbs, is also known as “Yakihata Road”. Burnings can be seen on the slopes along this road every year around the time of the summer obon season.

The main reason the practice is enduring here is simple. Crops grown with yakihata are considered to be significantly more delicious than those grown in regular fields. The city of Tsuruoka is an especially noteworthy example as the local residents rightly appreciate and embrace the fact that yakihata produce tastes good and has potential appeal beyond the region. As an example, the Italian restaurant Al-ché-cciano in Tsuruoka City spotlights the excellence of yakihata produce in its menu and has won many fans from all over Japan as a result.

The Yamagata Forum for Indigenous Crops, supervised by researchers at Yamagata University’s Faculty of Agriculture, is at the center of this yakihata movement. Rather than secluding themselves in their labs, these scientists collaborate with other relevant parties — including consumers, producers, logistics/processing vendors and government — to spur the rediscovery of local products that have been nearly forgotten in modern times. Specifically, they are focusing on heirloom vegetables, fruits, grains, and other familiar crop varieties that have a long history of cultivation, but which are not grown commercially or at scale.

These heirloom crops have long supported the lifestyles of locals and played a role in relaying distinct regional culture and traditions from one generation to the next. The Yamagata Forum for Indigenous Crops takes this into consideration, and rather than simply preserving genetic resources of crops, it aims to maintain and pass on cultural values such as cultivation methods, usage methods, and other related lifestyle wisdom.

Yakihata also provides many reasons for examining the relationship between nature and humans. Some people may associate the term yakihata with forest destruction due to slash-and-burn plantation development in many tropical countries. However, traditional yakihata is very carefully controlled and managed.

Although the technique disturbs fields with burning, it also allows land to lie fallow, stimulating a natural regrowth process. Furthermore, the clearing of forest to make way for these fields is done in a sustainable manner consistent with traditional forest management. Over the years, traditional forms of land management in Japan have declined and once-productive ecosystems have deteriorated. This is not only because of exploitive overuse, but also because of underuse and lack of human intervention. The diminishing use of burning practices is one factor in this underuse.

Indeed, the yakihata agricultural technique is far from destructive and is in fact beneficial to the environment. Some Japanese people may have memories of picking horsetails (Equisetum) in the spring from the burnt thin path between rice paddies or on riverbanks covered with soot. Setting fire to the earth stimulates green shoots by sterilizing the soil, eliminating pests and leaving behind a nutrient-rich ash to feed the seeds sown by farmers. While this is an act for the livelihood of humans, it also serves as a process that rejuvenates the fundamental vitality and regenerative strength of nature. This is what defines yakihata.

The use of fire in yakihata is also especially noteworthy as part of a broader history of using fire in everyday life. In the past, fire was used on a regular basis for tasks such as cooking or heating the home in the winter. If you asked people today, “Do you use fire on an everyday basis?”, many people would answer “No”. Even gas flames in the kitchen are becoming a less common sight, increasingly displaced by induction stoves. In Japan, we do not see field-burning or wood fires much anymore either, because burning waste is prohibited due to concerns about dioxins and air pollution.

But is this really the right answer? Dioxins should be considered a problem, but not necessarily from burning itself, rather from what is burned. Toxic emissions are due more to the fact that our lifestyles are filled with chemical substances. And while it is true that the slightest mistake in handling fire can invite disaster, it is because of this risk that people adopted a sense of responsibility and respect for using fire. Yakihata is an example of such carefully considered practice.

Modern lifestyles, in which fire is not used, have not only brought an increase in energy consumption but of chemical pollution through, for example, the use of chemical pesticides and fertilizers. So, reconsidering the use of fire has particular pertinence for the age in which we live.

Yakihata can no doubt provide us with many lessons, not only for exploring the concepts of agriculture and traditional culture, but also for reviewing our everyday lifestyles. Making the best use of the resources at hand is something that seems to be all but forgotten.

Watch the video brief embedded in the page banner at the top of the page for an in-depth look at another community’s use of yakihata as an element to their practice of a “dezukuri” lifestyle that is local resource-self-sufficient and recycling-oriented.

Farming with Fire: Revaluing a Japanese Agricultural Tradition by Takashi Kurata is licensed under a Creative Commons Attribution-NonCommercial-ShareAlike 3.0 Unported License.

Takashi Kurata is an Associate Professor of the Research Institute for Humanity and Nature in Kyoto, Japan. As a philosopher he deals with humanistic approaches towards global environmental change and specializes in everyday environmental consciousness. His current research interest is narrative change.