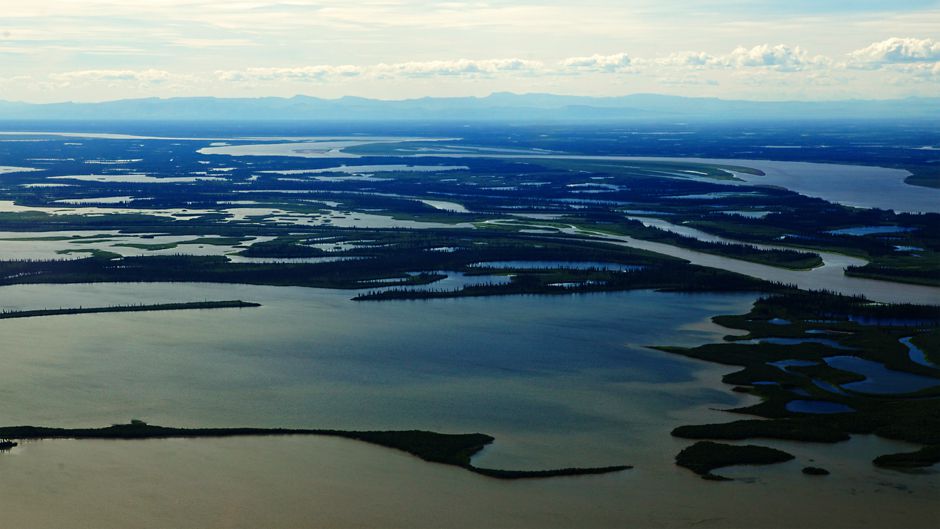 As succinctly put by a recent UNU Institute for Water, Environment and Health report, “[if] the market value of water is more significant than most people realize, water’s non-market values are simply staggering.”

The Mackenzie River is the largest north-flowing river in North America and the longest in Canada. It drains a watershed that covers nearly 20 percent of the country, which is five times the size of France. Water pours into the Arctic Ocean from the 1,800-kilometre-long river at the rate of four Olympic-sized swimming pools a second.

The Mackenzie River Basin is among the most intact large-scale ecosystems in North America. It is a significant breeding habitat for migratory birds and aquatic species: 63 percent is covered by boreal forest and 20 percent by wetlands.

While it is relatively undisturbed ecologically, the Basin is being put at risk by “a warming climate and development pressures from the exploitation of hydrocarbons, non-renewable minerals and hydroelectric potential”, says a new report by a panel of experts convened by the US-based Rosenburg International Forum on Water Policy.

Already the temperatures in the region have increased more than 2°C and permafrost areas are melting causing damage to roads, bridges and homes, deforming the ground and changing water flows. The report says that large quantities of methane trapped in the soil by permafrost are in danger of being released. Glacier cover has declined 25 percent in the last 25 years and, in spring, snow cover on the Canadian Rockies disappears about a month earlier.

“These large forces of change threaten the ecological integrity of the Basin, its capacity to provide important environmental services, and its role as homeland to Aboriginal Peoples who rely on the land and its resources to provide food, clothing, water and other necessities of life.”

The warning came just days after the Canadian Oil Producers Association says it expects oil production from tar sands in the region to double by 2030.

The river is so important, the report says, that it benefits not only residents, but populations across Canada, throughout the Western Hemisphere, and to some extent, the world. The Mackenzie Delta, like other boreal areas, absorbs carbon dioxide. Further, the report states that there is a clear link between the freshwater flows of the Mackenzie and Arctic Ocean circulation. These are believed to contribute to the stabilization of the regional and global climate.

“In this respect, the Mackenzie River Basin must be viewed as part of the global commons. The challenge of protecting the Basin and conserving its resources and environmental services is further complicated by its status as a commons, and by the need to recognize stakeholders who are not residents. The problems of the commons cannot be successfully addressed unless the population of the Basin and the constituent governments forthrightly assume the responsibilities of its stewardship.”

Though a complex challenge, addressing the threats to the Mackenzie River is possible, the report shows.

Although it flows through a vast, isolated region of forest and tundra entirely within the country’s Northwest Territories (NWT), the river is “jurisdictionally intricate” with tributary rivers running through three provinces (British Columbia, Alberta and Saskatchewan), two territories (Yukon and the NWT) and areas that fall under the jurisdiction of numerous independent indigenous governments. A Mackenzie River Basin Transboundary Waters Master Agreement was inked in 1997, but the Mackenzie River Basin Board (MRBB) that was set up to manage it is weak, the experts maintain.

Further, the experts found that the Mackenzie River has not been studied as extensively as other major rivers of the world and the working knowledge of the basin are limited.

“Efforts to protect and preserve the Mackenzie, and develop its resources in a balanced way, will require both the full use of all existing science and the need for additional study. The primary need is for a perpetual, robust and well-funded comprehensive monitoring program. Responsibility for the conduct of this program should be vested in the Government of Canada.”

That latter part may be a lot to expect as the country’s current Conservative government places high value on the region’s resource economy and has garnered international criticism for accusations that it is suppressing science that may threaten resource development.

Of course it would help if, as the report recommends, the MRBB be reinvigorated as an independent body charged with managing and protecting the Basin. The MRBB could thus then devise governance and management schemes that are comprehensive and holistic. As for scientific uncertainty, it can be addressed directly, the panel states, by supporting a monitoring program and by application of the “precautionary principle” (which holds that the absence of scientific certainty is not a valid reason for delaying or postponing measures that would avoid serious or irreversible environmental damage).

The MRBB should also be supported by an independent International Science Advisory Committee to ensure that the best possible science is used, and to develop and prioritize research agendas to guide the MRBB in other appropriate ways.

There should be full sharing of scientific information that explicitly includes a thorough examination of research outcomes that some interests may not like.

Indigenous peoples should be represented on the Committee, the report urges, as the traditional knowledge of the Basin’s indigenous residents should be sought out and used to the fullest extent possible. Input should be gathered from all classes of stakeholder and “there should be full sharing of scientific information that explicitly includes a thorough examination of research outcomes that some interests may not like”.

Speaking of thorough, the panel went a step further and noted that “there are also value questions and judgments that need to be addressed in the making of policies and plans for the Basin. While science alone cannot fully inform such judgments, that is not an excuse for ignoring the need to make the judgments forthrightly and transparently.”

Examples of the deeper questions the experts want addressed are: 1) How should the values and philosophies of traditional cultures be respected in the fashioning of balanced management policies? 2) What rates of economic growth are appropriate for the Basin and its distinctive regions? 3) How should extractive industries and hydroelectric developments be regulated?

Finally, the report includes a strong recommendation that likely springs from the real experience of the Giant Gold Mine, near the city of Yellowknife. After more than 50 years of operations, the mine stopped operating in 1999 and the company declared bankruptcy in 2004. This has left taxpayers to pay a C$1 billion bill for the clean up hundreds of thousands of tonnes of arsenic trioxide dust buried in thawing permafrost (caused by the heat of mining activity) and at risk of entering the ground water.

“Failure to require a significant performance bond or some similar incentive almost surely means that the legacy of despoiled environments, toxic wastes and other waste will continue unabated, and that taxpayers will be left to bear costs that are properly those of the mining industry.”