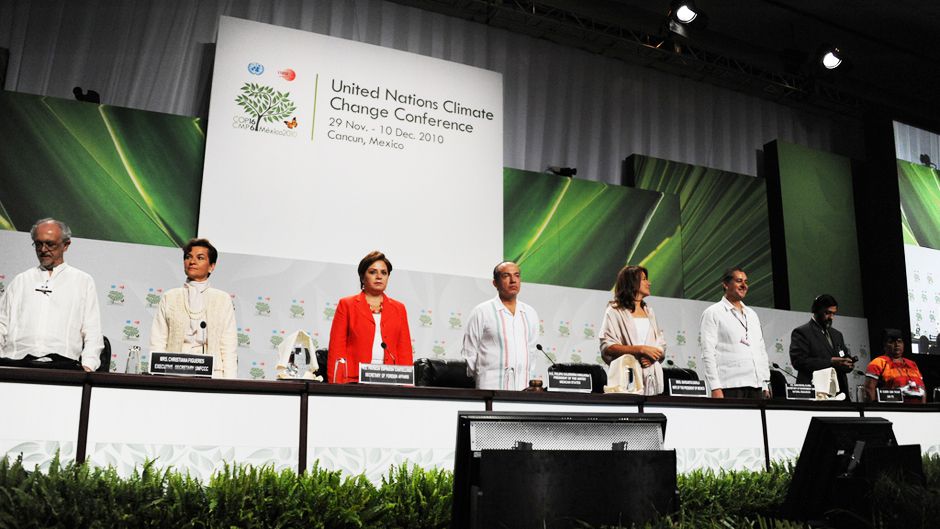 The failure of US climate legislation, following last year’s disappointing negotiations at Copenhagen, casts a pall over the round of climate talks in Cancún this week. And the global recession and budget-cutting crisis makes this seem like the worst time for new climate initiatives. Unfortunately, we don’t have the luxury of delaying action: the laws of physics don’t need 60 votes in the US Senate to continue making the world’s climate less and less liveable.

There are two battles over climate change. The legitimacy of climate science has been challenged in the media, but repeated reviews have found only scattered typographical errors in IPCC reports and other assessments. Last year’s theft of emails from climate scientists revealed the shocking news that leading researchers can be rude and competitive — but not much else. While science-deniers remain prominent in US politics, most of the world has moved on.

What the debate has moved on to, though, is concern about the costs of climate policies. Bjorn Lomborg, the poster child of climate scepticism, is no longer attacking the science; instead, he now claims that the damages from climate change would be small, while the costs of doing anything about it would be enormous. The new Lomborg (“Scepticism 2.0”) relies heavily on a few conservative economists, notably Richard Tol and William Nordhaus, to suggest that we can’t afford real climate solutions.

[quote quote=”We don’t have the luxury of delaying action: the laws of physics don’t need 60 votes in the US Senate to continue making the world’s climate less and less liveable.” type=”text” ]

Tol and Nordhaus are not on the fringes of their profession; they are well-known economists, publishing in peer-reviewed journals. Their work, however, reveals that economists often view climate change differently to scientists. Climate science is full of warnings about irreversible damages, which become increasingly hard to avoid as the world goes beyond 2°C of warming. Indeed, the target of staying below 2°C has been widely accepted — outside of economics — as necessary to avoid dangerous climate change.

In economics, the first stages of warming often sound benign. Tol projects that the world will be better off as a result of the first 3°C of warming; in his view, damages don’t become large until well beyond that. Nordhaus projects losses of only about 1% of GDP from 2°C of warming. In either case — whether 2°C of warming causes net benefits, or small losses — it doesn’t sound much like a threshold for dangerous changes.

Other voices can be heard in economics. The Stern Review took a fresh look at the impacts of climate change. It concluded that business as usual could impose climate damages of 5% or more of GDP, almost all of which could be avoided by spending 1% of GDP on reducing emissions. Stern emphasised the rights of future generations (in the algebra of economics, this means a low discount rate), and the global inequality in climate impacts, which will hit poor countries first and hardest.

Martin Weitzman, a Harvard University economist, has gone even further, showing that the inescapable uncertainty in climate science means that catastrophic economic losses cannot be ruled out. Policy should therefore be based on minimising the risk of worst-case outcomes, not on the most likely occurrences — just as the purchase of fire insurance is motivated by worst-case risks, not average results.

A new climate economics, breaking out of the bounds of the Nordhaus-Tol orthodoxy, is continuing to spread. The work of Economists for Equity and Environment, an American network of environmental economists, highlights much of the new research. Their recent studies include a review of the (quite affordable) costs of reaching an atmospheric CO2 concentration of 350ppm, and an examination of the wide variation in emissions among US states.

So, what’s an ordinary policy-maker to make of these debates?

In climate science, there’s an easy choice between the overwhelming weight of peer-reviewed research versus the know-nothing wing of American politics. In climate economics, a more discerning choice is needed: there are rival views within peer-reviewed economics. If, however, scientists are right that there are increasingly ominous climate risks from a few degrees of warming, then economic models that trivialise a few degrees of warming must be wrong.

The physical world isn’t waiting for us to sort this out. Go with the new economics, which is compatible with climate science. If we can’t reach agreement to take action at Cancun, or soon thereafter, we will be committed to intolerable worsening of the global climate. Doing something about the climate problem has its costs — but they are much less than the costs of doing nothing.

This commentary originally appeared on the guardian.co.uk on 30 November 2010.

Kevin Gallagher is professor of international relations at Boston University and a research fellow at the Global Development and Environment Institute.

Frank Ackerman is director of the climate economics group at the Stockholm Environment Institute.