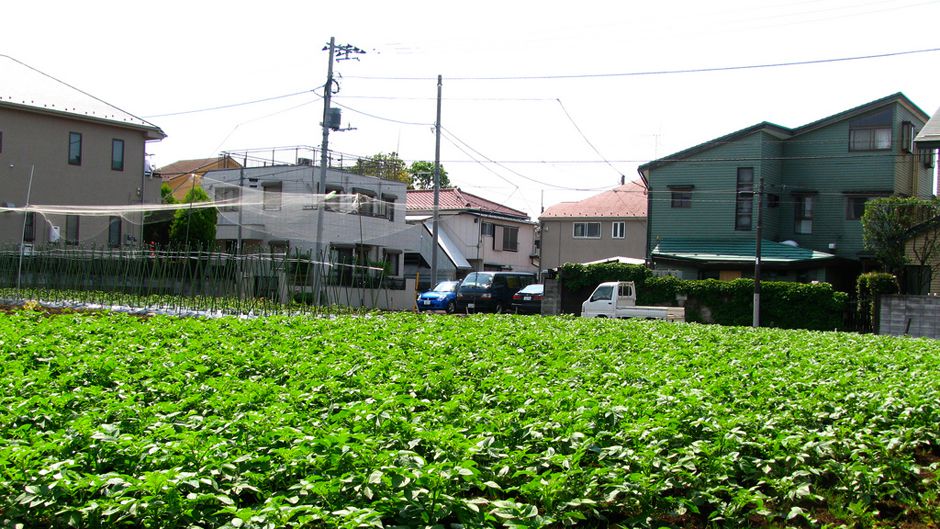 Sometimes regarded as a sign of developmental failure, a nuisance or simply nonsense, the truth is that urban agriculture has experienced a renaissance in recent years. Momentum has built around agglomerating social movements concerned with providing community access to fresh, locally grown foods. Urban planners are seeking innovative solutions to the social and environmental challenges imposed by an urbanizing world, and scientists are looking to urban ecosystems as providers of vital ecosystems services — such as food, heat-island control and water management — that are able to boost local well-being and reduce the ecological footprints of cities.

Japan is quite a unique case when it comes to urban agriculture. Despite being a highly industrialized country, the presence of agricultural land use is a common feature on the urban landscape of cities across the nation. It might come as a surprise that almost one-third of all agricultural output in the country is, in fact, generated by urban agriculture. Likewise, urban farmers account for 25% of farming households in Japan.

In addition to these roles, urban agriculture can further contribute to sustainability and well-being in cities. For instance, by increasing the area of permeable surface for storm water management, or reducing the heat-island effect (and, thus, potentially energy needs) by cooling the air. Urban agriculture also can contribute to biodiversity and ecosystem services by providing habitats and managing species (e.g. boosting pollination and growing local varieties). Furthermore, it can reduce food miles (the distance that food must be transported) and even provide bio-energy resources (e.g., from managed forests).

Yet, despite all its actual and potential benefits, agriculture in Japanese cities is under threat. In just the past decade, agricultural land use has diminished by over 40% because of urbanization-related impacts, even though the population of the country has remained stable. The number of people practising agriculture in urban areas also has decreased dramatically. In Tokyo, for instance, the number of families involved in agricultural activities has decreased by more than 60% since 1975.

The first difficulty in dealing with urban agriculture lies in its definition and, hence, its regulation. In Japan, urban agriculture falls under the MAFF, which is in charge of policies concerning agriculture, and the Ministry of Land, Infrastructure, Transportation and Tourism (MLITT), which deals with urban planning. Since the two ministries use different zoning classification systems to distinguish between areas in which urbanization is a priority and areas in which farming is, there are conflicting definitions of what in fact constitutes urban agriculture. This, in turn, results in policy challenges at the ground level, often aggravated by regional and local regulation.

The other major factors posing a challenge to urban farming are:

Aging of farmers — Important challenges for urban agriculture also arise from the national demographics. The average age of most people practicing agriculture in Japanese cities, as is also the case in rural areas, is rapidly rising. Consequently, great uncertainty exists regarding the extent to which agricultural areas will remain functional in the coming decades, which production methods will be employed, or what kind of land uses agricultural fields will transition towards. This could jeopardize some of the current environmental and socio-economic functions of urban agriculture.

Tax barriers — For the most part, maintaining productive farmland in the urban areas of Japan poses an economic burden for landowners, who face significantly high taxes such as the so-called inheritance tax. Special provisions exist under national legislation to grant tax exemptions to active urban farmers, further complemented with incentives by cities. Yet high urban real estate prices and tough compliance requirements of some tax exemption programmes (such as a lengthy commitment to active farming of 30 or more years in some cases) drive farmers away from production or into transforming land for development.

Commercialization — For urban agriculture to thrive in Japanese cities, bringing consumption of local, eco-friendly products from its current niche market into a mainstream one remains a challenge. Although direct sales at farm stands or farmers’ markets are not uncommon, often urban products are commercialized in regional, national or even international markets, thus missing the opportunity of urban agriculture to contribute to sustainability by reducing food miles and packing and processing needs while strengthening the local economy with high-value-added products.

Productivity shift — Proximity to densely inhabited areas makes urban farmers especially prone to reducing chemical use. According to the 2005 Agricultural Census, the number of farmers practicing low or chemical free agriculture in Tokyo, Osaka and Kanagawa was significantly higher than the national average. Yet truly ecologically sound practices are not the rule in Japanese cities. Soil conservation, organic fertilization, ecological pest control, enhancement of seed diversity, and a systemic approach integrating other urban ecosystems such as forests or aquatic systems are elements missing at the planning and management level. For urban farming to make a significant contribution to sustainability and local well-being, it needs to transition to a fully systemic, ecological approach so as to sustain production over time without compromising urban biodiversity and other local ecosystem services.

Despite the hurdles, opportunities do exist for strengthening the roles of Japanese urban agriculture for sustainability and local well-being, including governance, economic, environmental and social aspects.

New conceptual approaches — Recently, the idea of cities managing their local ecosystems for agricultural production has been gaining momentum. For example, the continuously productive urban landscapes (CPULs) concept is a planning framework for increasing local sustainability while reducing urban impact. By designing compact cities with surrounding areas that can be used for agriculture, the need for industrialized production, extensive packaging and lengthy distribution can be significantly reduced. Especially relevant for Japan are the concepts of satoyama (and satoumi), which refer to “dynamic mosaics of managed socio-ecological systems that produce a bundle of ecosystem services for human well-being”. Although originating in the rural context, both concepts offer valuable lessons for cities. For instance, satoyama landscapes in peri-urban areas can become important hotspots for agro-ecological production that can fulfil urban demands for foods, energy and cultural services while revitalizing the local economy, especially in areas with declining populations.

Increased interest of urban residents in agriculture — In recent years, interest in agriculture has grown significantly among Japanese urban dwellers; according to a recent study by MAFF, over 85% of Tokyo residents would like their city to have farmland in order to secure access to fresh foods and green space. The systems Taiken Nouen, by which people participate in different activities with actual farmers, and Shimin Nouen, or allotment gardens, are the two most popular systems of citizens’ involvement in urban agriculture in Japan. While the number of allotment gardens in rural areas remained constant over the last decade, in urban areas it increased by 67%. According to 2010 MAFF data, applications were 30% higher than the number of existing gardens nationwide. In some highly industrialized cities, such as Kawasaki and Nagoya, demand for gardens surpassed supply by over 300%.

Green economy: urban agriculture for sustainable consumption–production networks — In an urbanizing world, cities are fundamental for achieving a green economy, a concept now at the forefront of the international sustainable development agenda. Because of its proximity to consumers, urban agriculture can more easily target urban demand, as opposed to rural production which is more exposed to the influences of agricultural commodities’ markets. Throughout Japan, the production of conventional rice and stockbreeding in urban areas has decreased drastically, shifting towards high-value-added products such as vegetables and fruits. As Japanese consumers of urban agricultural crops are largely interested in eco-friendly products, the establishment of local production–consumption networks in cities can contribute to sustainability while generating economic opportunities. Local brands for urban products, such as the Yokohama brand or the Kaga brand in Kanazawa, as well as direct sales to consumers, are mechanisms already in place, although yet to be mainstreamed across the country.

Innovative finance mechanisms: payment for urban ecosystem services and biodiversity — Economic compensation for the provisioning of environmental goods and services not captured by the market is an innovative mechanism for enabling a green economy. While not specifically designed for cities or agriculture, such payment schemes could be used to strengthen the roles of urban farming as provider of local biodiversity and ecosystem services, incentivizing a shift towards clean, biodiversity-friendly production practices. Given the importance of urban agriculture in Japan in extent and production, and given the demographic threats it is currently facing, improving biodiversity and ecosystem services while generating economic opportunities can be a win–win solution. New governance instruments, such as the ones emerging from the Plan of Action on Subnational Governments, Cities and Other Local Authorities for Biodiversity recently adopted at the 10th Conference of the parties of the Convention of Biological Diversity in Nagoya in 2010, could enable this transition.

Urban regeneration and political momentum for urban agriculture — Many Japanese cities, rapidly developed in the post-war period under weak zoning mechanisms, present a scattered mosaic of green patches among buildings and concrete infrastructure. Cities across the country are developing urban regeneration policies aimed at restoring the urban landscape for improved local environment and well-being. Within this context, urban agriculture provides a much needed source of greenery, especially in highly industrialized, urbanized areas of big cities and city centres. At the national level, the importance of urban agriculture within Japan’s national environmental strategy has been recently recognized.

Green innovation — In a technology-savvy country like Japan, urban agriculture offers a fertile ground for green innovation. From rooftop gardens for urban residents to engage in agriculture, to green curtains using edible species for insulation of public buildings, to computer-based indoor plant growing, new forms of urban farming are emerging. By linking its technological potential to the principles of sustainable agriculture rooted on the traditional farming and food cultures, Japan could play a leading role in urban agricultural innovation, inspiring other countries to follow suit.

In Japan, urban farming is both a significant component of the national agricultural sector and an essential ingredient of city space. By creating an integrative policy environment that enables cities to maximize multiple ecological and socio-economic benefits, urban agriculture will make a significant contribution to sustainability and to the well-being of city dwellers — from enhancing local ecosystem services and biodiversity, to reducing urban footprints.