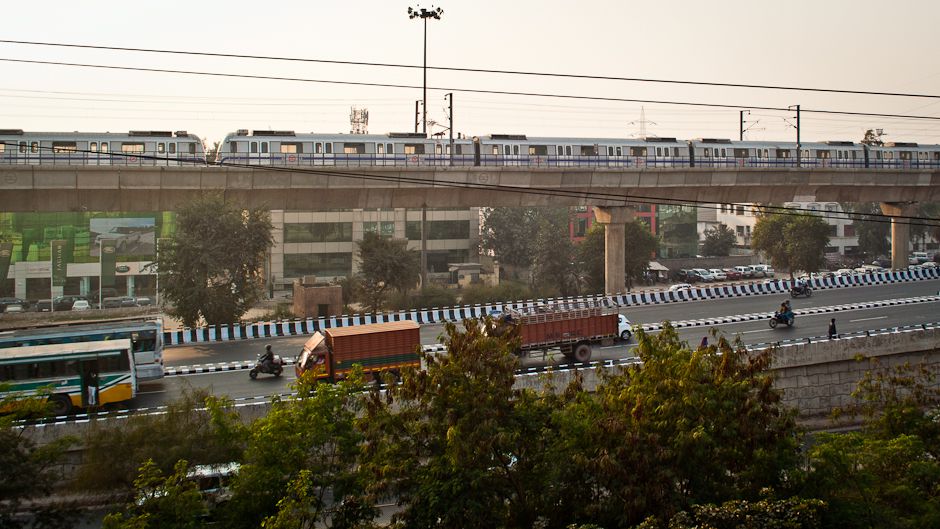 A well functioning and efficient transport infrastructure is essential to almost any major city. They are commonplace in many cities and their origins tell us much about urban development.

The first underground railway was constructed in London in 1863, initially using steam trains and then becoming the first electric railway in 1890. Whilst initially connecting key points in the city (usually mainline railway terminals), the underground gradually grew, spreading its tentacles into the suburbs.

In the interwar period in Britain, this new form of transportation became known as Metroland, it transformed sleepy villages into suburban sameness and was responsible for developing much of the suburbs West of London. Poet Laureate Sir John Betjeman immortalised the spirit of Metroland, the future that awaited these areas and the modernity imposed upon them in his 1954 poem A few late Chysanthemums:

Gaily into Ruislip Gardens
Runs the red electric train,
With a thousand Ta’s and Pardon’s
Daintily alights Elaine;
Hurries down the concrete station
With a frown of concentration,
Out into the outskirt’s edges
Where a few surviving hedges
Keep alive our lost Elysium — rural Middlesex again.

Half a world away and nearly a century later, many cities in developing countries are facing serious transport problems due to rapidly rising populations and growing economies. One such city is Delhi, where a metro project has been developed to address the ever more pressing transport problems in the Indian capital.

The rapid increase in the number and use of private cars and two-wheelers is leading to various problems including air pollution, traffic congestion, increased accidents and carbon emissions. Vehicular pollution is the main contributor to worsening of air quality in Delhi, accounting for 72% of total air pollution in 2001.

Initially, policies were introduced by national and state governments based on vehicle and fuel efficiency, such as phasing out older vehicles and making compressed natural gas (CNG) a mandatory fuel in public transportation. However, more recently, policies are focused on improving public transportation infrastructure, with the city’s new metro as the flagship project.

The Delhi metro is designed to be completed in four phases, of which two have been implemented to date. Phases I and II of the network, with a total route length of 193 km, were completed in 2006 and 2011 respectively. The project has been funded largely by the Japan International Cooperation Agency (JICA) through Overseas Development Assistance (ODA) loans. Around 65% of the cost of the first two phases is covered in this way.

Despite its carbon credentials and fast progress in construction, the Delhi metro has been the major controversial issue of urban policy-making in the city in recent years.

Phases III and IV are to be completed by 2021, with the intention of increasing the total network coverage to 414 km. At present, Delhi metro carries approximately 1.8 million passengers in a day, representing fewer than 20% of total passenger trips in the city.

A distinctive feature of the metro is that it was the world’s first transport project to receive carbon credits under the United Nations Framework Climate Change Convention (UNFCCC) Clean Development Mechanism or CDM. Its braking system regenerates around 35% of the total energy consumed to run the whole system. The regenerative braking technology in the braking system of the Delhi metro enables the trains that are in braking mode to generate electricity, and then the regenerated electricity is transferred to the trains in powering mode by the entire system. As per the estimations made by the Delhi Metro Rail Corporation (DMRC), 41,160 tonnes of carbon dioxide (CO2) emissions per year will be reduced between 2007 and 2017 due to energy generation by the braking system. This excludes the emission reductions from the potential cars taken off the road after the metro. DMRC’s second CDM project, which is on the way, is based on the shift of passengers travelling by road transport to the metro trains.

Despite its carbon credentials and fast progress in construction, the Delhi metro has been the major controversial issue of urban policy-making in the city in recent years. Several criticisms are being made against the project by academic and professional communities as well as the media, given that passenger numbers are far behind expectations.

A recent press report bemoans cost escalations and low ridership, even though the metro has the lowest fare structure in the world. Prof. Dinesh Mohan, a transport expert from the Indian Institute of Technology in Delhi, is a stern critic of the metro for being an expensive and awkward solution to Delhi’s transport problems considering the city’s diffuse spatial structure. Yet he acknowledges the inevitability of a prestige project for Delhi to compete on the world stage; more in the interests of foreign contractors and the upper-middle classes who won’t be displaced from its construction, unlike poorer communities and those from lower-castes.

More broadly, Mohan argues that metros have had their day, attractive in the first half of the 20th Century when little competition existed. Now cities have extensive road networks, consideration of buses and in particular bus rapid transit (which uses dedicated bus lanes) as alternative and, importantly, far cheaper means of mass transit given existing road networks are already in place, especially for developing countries that need to achieve multiple development objectives with limited funds.

Either way, the attraction of private transport is undeniable. Once people have mopeds and cars, it is an extra challenge to get them onto a bus or a train — a challenge that grows ever greater as cars now have air conditioning as standard and an ever-larger array of creature comforts to make longer commutes more bearable, especially in hot and sticky climates.

Convenience is one of the main motives that determine people’s transport choices. Any transport mode that provides affordable and easy door-to-door mobility will attract more users. Hence the overwhelming use of cars in United States’ cities and high interest in mopeds in developing Asian countries.

City governments therefore, cannot just rely on building metro systems and assume people would opt for them just because they have them in their cities. A low fare structure is an important competitive advantage but it is not enough to make metros the most popular mode, as we see in the case of Delhi. Integration is the key word here.

Only a metro system that is well-integrated with other essential components of the urban environment can compete with private modes of transport and turn car and moped-users into metro riders.

Only a metro system that is well-integrated with other essential components of the urban environment can compete with private modes of transport and turn car and moped-users into metro riders. A recent survey indicates that Delhi metro’s low ridership is mainly due to its weak integration with other transport modes, population centres and workplaces.

Two critical dimensions of urban transport policy are integrating different modes of transport and integrating public transportation with key urban facilities like workplaces, residential and commercial areas. Integrating different modes would make multi-modal journeys easier, faster and smoother (barrier-free), and thereby reduce door-to-door travel time. In this sense, metro stations should be made easily accessible for those walking, as well as those arriving via bicycle, bus, moped and even car. This can be achieved through improvements in physical urban transport infrastructure (the metro also operates a feeder bus service to some stations), as well as non-physical measures, such as smart tickets and real-time travel information.

To be even more effective, metro projects should also be developed and implemented in line with land-use planning decisions and urban development scenarios. Such integration requires cooperation and coordination among relevant institutions and policy-makers at the local level, which is not very easy to ensure. In Delhi, the DMRC was established as a privileged corporation with lawful exemptions and exceptional powers to carry out the fast-track implementation of the metro project. Having such an agency seems to have accelerated the implementation of the project at the expense of increasing the competition among various institutions in Delhi’s transport sector. Several institutions are currently working to improve the city’s transport infrastructure by building bus rapid transit lines, monorail and light rail systems along with the metro but with limited coordination and cooperation.

Betjeman’s halcyon vision of Metroland giving residents the happy medium of a town and country lifestyle gets a twenty-first century makeover at the end of the line in Delhi. Large-scale building development at the fringes of the Dwarka and Gurgaon areas provide a different vision of Metroland. The process however, is still the same. Developers are seduced by the imminent arrival of the Delhi metro to build new housing complexes, albeit denser versions of Metroland serving the needs of a 16 million-inhabitant megacity.

In practice, rapidly developing cities will rely on many strategies to solve their urban mobility challenges. What is important is that competing players work together to integrate transport rather than protect their own interests. Integrated urban transport can mean reducing the transaction costs of changing modes, both financially and physically.

Time will tell whether the Delhi metro can achieve the ridership that was predicted. Meanwhile, the metro marches on as the Delhi Metro Rail Corporation is using the expertise gained from this experience to provide advice to other cities in South Asia.

This work is licensed under a Creative Commons Attribution-NonCommercial-ShareAlike 3.0 Unported License.