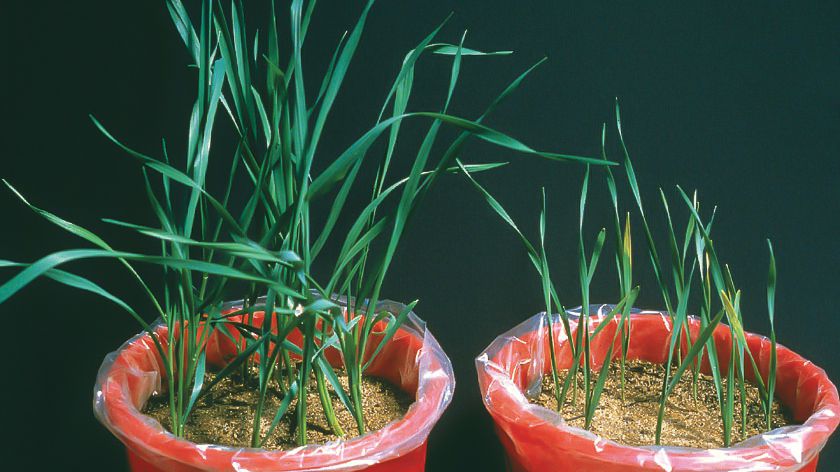 Modern agriculture would be inconceivable without phosphate fertilisers — and it needs more and more of them. Experts warn of an imminent phosphorus shortage. But not Roland Scholz from the Institute of Environmental Decisions. For him, the main problems are the open phosphorus cycle and non-sustainable resource management.

A year ago the American magazine Foreign Policy wrote of the “most serious shortage of resources you have never heard of”; it was referring to the imminent global shortage of phosphorus. The chemical element is regarded as the bottleneck of nature, which we cannot live without. Phosphorus is a basic building block for all living organisms; there is no substitute. It is also component of DNA and our bones, and plays a crucial role in cellular energy production. Humans take phosphorus on board in the form of food, the production of which again is made possible through fertilisers that contain phosphates.

Nowadays, fertilisers are produced with over eighty percent of the raw phosphates extracted. In 2008 the total global production amounted to around 150 million tons — and the demand continues to rise.

No “peak” on the horizon

Most of the phosphorus for the production of fertilisers is mined. At today’s volumes, the known reserves will eventually run out, and so the term ‘peak phosphorus’ was coined in 2007. As with crude oil (peak oil), the experts suspect the maximum output has been reached; that the reserves can only decrease from now on. Calculations as to how long the global phosphorus reserves will last range between fifty and one hundred years, as the Global Phosphorus Research Initiative announced — an international union of researchers devoted to peak phosphorus.

Roland Scholz, a professor from the Institute for Environmental Decisions, however, does not believe a peak is on the horizon: “As it is, we know far too little about the natural reserves to be able to make a prediction like that.”

Large-scale industrial phosphorus processing in Morocco: together with the Western Sahara, the country produces about thirty-five percent of the world’s phosphorus.

The global oil deposits are a different kettle of fish altogether; they have been researched thoroughly, so we can already make sound quantitative estimates. As far as the calculations of the phosphate reserves are concerned, however, we are reliant upon data from the industry. But mining is not the only way to obtain phosphorus; it exists in various forms and qualities. Scholz found an indication of just how uncertain today’s estimations really are in a recent publication on Morocco’s reserves: the authors concluded that they are actually twice as big as originally assumed.

A trained mathematician, Scholz especially criticises the type of the calculations used thus far. Like peak oil, peak phosphorus is calculated using the Hubbard curve. However, this only makes sense under certain conditions; the available resources have to be known and limited, and the demand function constant, for instance. According to Schulz, however, a model for calculating the phosphorus peak also needs to include possible technological innovations in mineral extraction. In calculating the copper deposits, for example, for a long time the estimations were too low because the experts only assumed it could be extracted from ores containing at least two percent copper. Today, we process ores with a 0.2-percent copper content.

“But because there haven’t been many incentives for phosphorus until now, the potential sources of innovation aren’t being exploited fully,” explains Scholz. Potential technical innovations in phosphorus recycling also need to be factored into the equation, he says. After all, unlike with oil, phosphorus does not dwindle away.

Scholz considers the ecological and social costs of the unsustainable use of the resource to be more problematic than the peak: “The environmental damage caused by the extraction and use of phosphorus is still greatly underestimated.”

Phosphorus often appears in combination with heavy metals, which can contaminate the soil and jeopardise the entire food chain; phosphate fertiliser, in turn, reduces the biodiversity in the soil and, via sewage, causes the excess growth of algae in lakes and seas and even ‘dead’ zones in oceans. It’s not for nothing that detergents containing phosphates have been prohibited in Switzerland since 1986; the EU is looking to introduce a similar ban by 2013.

However, a move away from phosphate fertilisers in agriculture is hard to imagine now.

Dependence on a particular technology also carries political consequences: ninety percent of the phosphorus deposits extracted today comes from five countries: Morocco, China, South Africa, Jordan and the United States. China recently gave a foretaste of how a wealth of natural resources can be exploited for geopolitical gains when the country drastically restricted the export of rare earths. Because the coveted metals are vital for a wide range of electrical devices, such as digital cameras and smartphones, western corporations found themselves short on supplies. The message was clear: anyone who wants to have guaranteed access to rare earths from now on will have to move his corporation to China.

Similar dependencies could also develop for phosphorus. Particularly in regions where the soils lack nutrients, such as parts of Africa or Asia, access to fertilisers means the difference between there being food on the table that evening or not. If people do not have access to fertilisers or can no longer afford them, the threat of humanitarian disasters looms.

For a closed phosphorus cycle

Owing to phosphorus’s political, economic and ecological dimension, Scholz is convinced: “After acid rain, the destruction of the ozone layer and climate change, phosphorus could become another globally discussed subject of research.” Consequently, he and his team have initiated a global, interdisciplinary process called Global TraPs along with other professors from ETH Zurich to design a sustainable, closed phosphorus cycle. All the way along the phosphorus process chain, international experts from research and industry will be looking for ways to make the phosphorus cycle more efficient.

The project members are looking to close the gaps in research and create transparency with regard to the actual global phosphorus reserves by 2015. They also want to boost the development of phosphorus-related research and demonstrate ways as to how sustainable phosphorus management could be realised through collaborations between science and practice. Earlier this month the first project management meeting was held at ETH Zurich with thirty-eight participants from all over the world. It will be interesting to see whether the team manages to get the topic of phosphorus on the global agenda.

This article appears with courtesy of ETH Life Magazine, a publication of the Swiss Federal Institute of Technology Zurich.