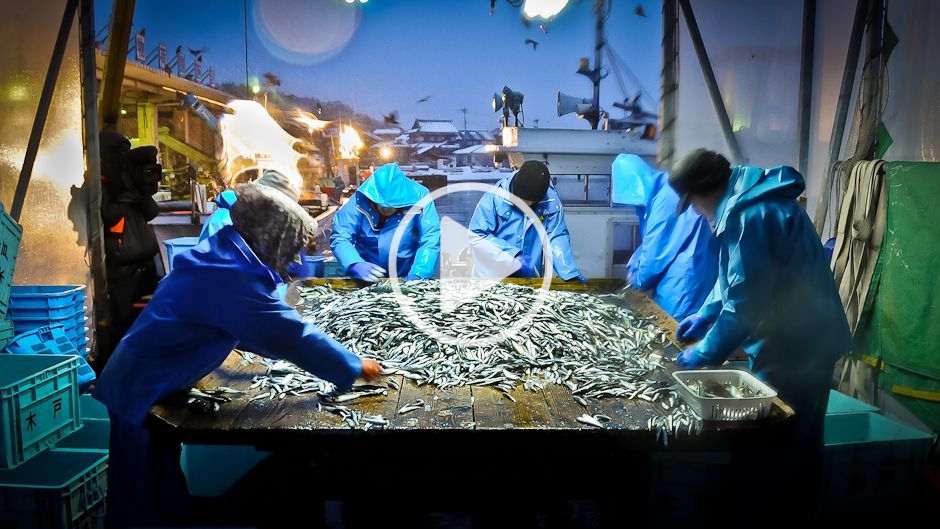 From north to south, the long coastline of Japan cultivates diverse local lifestyles reflecting unique geographic conditions. People live in harmony with the sea by combining their traditional wisdom with scientific knowledge. These coastal areas, where the sea and human beings are intimately connected, are called “satoumi”. This article and video brief are part of a series exploring several variations of satoumi, or can be watched as one 74-minute film.

Nanao Bay is an enclosed coastal sea located on the east side of Noto Peninsula in Japan’s Ishikawa Prefecture. Due to its topographical features as a calm natural bay closed off from the ocean, it has a long history as a marine haven for fishers and marine traders.

During the Tokugawa Era (1603-1868) it served as a port for kitamaebune (literally, “northern-bound”) cargo ships transporting marine products such as herring and kelp and other commodities along a particular route from northern Hokkaido through the Kanmon Straights and Seto Inland Sea to the feudal capital in Kyoto.

Salt produced on the peninsula was also a much sought-after commodity as a preservative for the marine products transported along this marine trade route.

With limited arable farmland on the peninsula, holistic approaches to integrated watershed human activities of fishing, farming and forestry have traditionally been practiced and satoyama landscapes and their marine counterpart, satoumi, have long coexisted.

The future of these traditional landscapes, however, is a growing concern among local policymakers as recent demographic trends indicate ageing and decreasing populations of fishers and farmers in the area.

A rich, once plentiful, resource

Sea cucumber, mozuku (Nemacystus decipiens, an alga-like seaweed) and shellfish account for approximately 70 percent of Nanao Bay’s annual catch. Pacific oyster farming, introduced to the bay area in the 1920s, is currently the largest production area of any coastal community along the west coast of Japan.

The enclosed Nanao Bay area is approximately 183 square km and is divided into north, west and south bay areas based on depth and other marine environment characteristics. The average depth of the bay is between 20–30m, and is deepest in the north bay area entrance at 60m. The waters gradually grow shallower from the north bay entrance towards the west bay area where there is an intertidal zone made up of sand and mud.

The enclosed bay produces many species that do not inhabit other marine coastal areas in Ishikawa Prefecture and are considered commercially non-viable due to the low yield potentials and lack of consumer demand for the species, according to a 2009 Ministry of the Environment report on the Nanao Bay Satoumi Creation Project.

Of the commercial marine species, over 80 percent of the sea cucumber catch of Ishikawa Prefecture comes from Nanao Bay.

Juxtaposed to the fishing activities of the north and west bay areas is the south bay area where urbanisation and industrial development have resulted in land reclamation and artificial coastal zone construction activities. Located at the mouth of Misogi River, the south bay area serves as a cargo port surrounded by an industrial zone of marine product processing plants and other small-scale industrial factories, including a timber basin.

Significant declines in annual fish catch and oyster farming yields from the late 1980s through the 1990s aroused concern among fishers, field station researchers and, more recently, among fisheries and environmental policymakers. Annual fish catches prior to decline were 2,000 metric tons. The current average in recent years is half that, at approximately 1,000 tons, according to the Ministry of the Environment.

Since the late 1990s, fish catches have stabilised, but oyster yields have continued to decline and the oyster harvest recorded for 2006 was 1,920 metric tons, a mere 38 percent of the peak yield in 1984. These declines have led to investigations of the bay marine environment by the Ishakawa Prefecture Fisheries Research Center, specifically water quality and sea bottom environment studies to identify the causes for the declines in yields.

Comparing fish catches with ocean pH levels a 2009 report by the Ocean Policy Research Foundation revealed (link in Japanese only) that pH levels in 1990, the year yields drastically declined, were above 8.5 indicating red tide potential in the bay.

High concentrations of ammonium nitrogen were recorded in 1991 possibly resulting from deterioration of the sea bottom environment by anthropogenic eutrophication. The overall decline in fish population may in part due to land-based anthropogenic activities such as discharge from factories, household sewerage and agricultural chemical run-off.

Studies (such as this one and a 2009 Ministry of the Environment report on the Nanao Bay satoumi creation project) have indicated sea bottom environment degradation in the west and south bay areas. Though not conclusive, fisheries researchers in the area also suggest environmental degradation may be the cause of declining catches of blood clam. More specifically, despite substantial annual releases of young shells into the bay to increase stocks, poor survival rates of the young shells has been attributed to the deterioration of the sea bottom environment.

Of the land-use changes, urban expansion is most prominent along the bay’s coastal areas. Approximately 90 percent of the Nanao Bay shoreline has concrete revetments, resulting in loss of habitat for plants and animals, which can reduce marine biodiversity. More notable, however, is that most of these concrete revetments are vertically settled. This not only prevents seaweed and fish species that prefer rocky shores from growing, but also reduces the rate of water exchange and inhibits the sea-to-land migration of organisms such as Japanese mitten crab, which inhabit both fresh and salt water.

Time for a collaborative response

In order to respond to the above challenges, Nanao Bay became one of four pilot sites selected by the Japanese Ministry of the Environment in 2008 as a model where integrated river basin activities could be explored for a two-year period to provide scientific and socio-economic data on issues including local government policy.

The project was designed to develop satoumi activities that would go beyond the enclosed coastal waters by linking mountain and agricultural lands along waterways flowing into the bay. Selection by the national government as one of four pilot sites provided the impetus, as well as facilitated local efforts to bring various stakeholders together. A steering committee was established at the local government level and members included researchers, Nanao Bay Research Group representatives, and fisher cooperative association representatives.

By allowing for local initiative in designing activities, the national government has contributed to local empowerment potentials. Data collection, monitoring activities, social-science based interviews with the different interest groups in the bay and meetings to discuss the research activities were a requirement of the project.

Not only were research findings key to stakeholder mobilisation, but researcher interaction with the various interest groups (from fishers to tourist groups to the cross-sectoral local government offices) and participation in the multi-stakeholder local dialogues has also been instrumental in strengthening local initiatives and providing the scientific validity needed to effectively link local efforts to national initiatives.

This article is an abbreviated version of the paper: Anne M. and G. Terauchi. 2011. “Multi-Stakeholder dialogue initiatives in Nanao Bay” in Biological and Cultural Diversity in Coastal Communities: Exploring the Potential of Satoumi for Implementing the Ecosystem Approach in the Japanese Archipelago. Secretariat of the Convention on Biological Diversity Technical Series No. 61. 38-45.

For a full list of citations, please refer to the original publication’s bibliography.