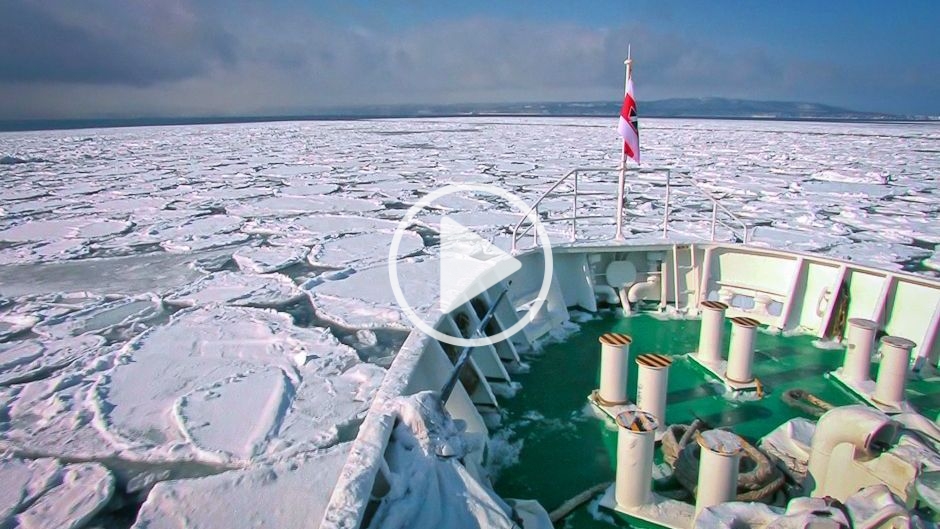 Every spring and summer huge masses of Arctic ice are detaching and falling into the sea, as shown on countless news reports worldwide. The melting, scientists tell us, is a result of human-made global warming.

It has gotten to the point where presently, a passage through the Arctic Ocean that was frozen solid for ages is being eyed as a new shipping route between North America, Europe and Russia. Similarly, ice sheets are disintegrating in Antarctica and Greenland, and glaciers are melting in the Himalayas and Bolivia.

But this is not only happening in remote locations. For the Japanese, it is also touching a place closer to home — the Sea of Okhotsk off the coast of Hokkaido, the northernmost of Japan’s main islands.

The Okhotsk has long been the southernmost spot in the Northern Hemisphere where polar sea ice is found. After spreading southward out of the Arctic each winter and along the eastern edge of Sakhalin Island, the ice typically arrives in Hokkaido in mid to late January. The best time to see it is the latter half of February but it stays until late March or early April.

This drift ice has been an important tourist draw to towns like Abashiri on Hokkaido’s northern coast, with local festivals honouring it and museums dedicated to it. What’s more the drift ice helps to sustain the area’s marine life.

“As the drift ice contains fresh water from Amur River, it brings with it a lot of plankton,” explained Sachiko Mishima, Director of Abashiri’s Drift Ice Museum. “And so small fish, large fish, seals, and even whales come as a result. Thus Okhotsk becomes a magnificent sea.”

“Drift ice is a natural thing, not something man can control. That’s why we want people to see and experience it,” she said.

But how is the ice diminishing? The simple answer is that the amount of ice is thinning and it arrives later each year because of global warming. The meteorological observatory blamed strong western and south-westerly winds for the delayed arrival this year, while others point to a warmer winter.

In fact, the shrinking phenomenon has been developing for 20 years — the ice first began to decline noticeably in 1989 and has never recovered to its former levels. (See data from 1969 onwards.)

It is no coincidence that this was around the time of the “first big pulse” of media coverage and public attention about global warming, according to Andrew Refkin at the New York Times. Just the year before in the US, NASA climate expert James Hansen told a Senate panel that global warming was happening and it was already changing the climate.

The thinning of the drift ice is a clear indicator of climate change right on the doorstep of Japan. This year, it arrived at the Abashiri shore 18 days later than the average year, the second latest date since 1959.

It is one of many tell-tale signs across Japan. For instance, cherry trees blossom earlier each year. In Tokyo this year they blossomed seven days earlier than average for the past 30 years. Some experts say the cause is climate change and the heat island effect.

The changing pattern of drift ice is caused by a combination of factors, as shown via animation in the videobrief. These include the interaction between frigid temperatures in Siberia, freshwater from the Amur River and the fact that Okhotsk Sea is sheltered from the Pacific by a series of islands.

Scientists have noted that Siberia is getting warmer, that wind patterns are changing and that the temperature of the Okhotsk Sea is rising. The changes are gradual, but they are enough to affect the drift ice and to cause local concern.

The temperature in Siberia has risen about 5 degrees over 30 years, he said.

“I believe the temperature change across Siberia and Okhotsk Sea is the result of global warming.”

For more information on the process, watch the video interview with Prof. Mitsudera here.

The drift ice is an important winter tourist destination. Many tourists now find themselves on the front line of climate change, without fully appreciating what is going on. Drift ice tourists cancel their hotel bookings if the ice has not arrived.

The same is happening with other natural sightseeing vacations. For many Japanese, the cherry blossom is a cultural icon and hanami — flower viewing — is a special time to get back to nature. When you realize that full bloom lasts only a few days, and that Japanese people and foreign tourists plan weeks in advance to go cherry blossom viewing, people are relying on accurate predictions from the Japan Meteorological Agency. It does make planning of cherry blossom vacations more difficult.

The drift ice also plays a role in the Okhotsk Sea’s ecosystem as an important ground for fish reproduction so it’s loss has myriad consequences.

“The drift ice decrease has many effects on the environment,” Prof. Mitsudera explained, warning that one of those effects is a decrease in iron content, which is key for the photosynthesis of plants and plankton. “Without it, photosynthesis will not occur. That will then affect the marine and fishing resources.”

So the economy of the area is very much dependent on the drift ice. Already the icebreaker boats and other ice-related activities see fewer customers and hotels get cancellations. In response they are turning greener.

Green tourism is not a new idea. Many of us tend to understand it as not changing the towels and bed sheets each day or using less soap and shampoo. However, in Abashiri, local hotels are going farther than that — working together to reduce their carbon emissions thus helping to protect the drift ice, or slow the speed of its decline. One of their main carbon-saving techniques is setting thermostats at 20C in the winter.

These actions are encouraged by the Okhotsk Drift Ice Trust Movement, set up by an Abashiri-based sightseeing federation and local residents. According to Kuniko Kashiwagi of Abashiri Municipality, the effort has caught on quickly.

“When the movement started officially in December of 2007, there were only forty hotels participating but since then the number has increased 79 hotels and ryokans.”

Last year, in particular, the movement pushed to raise awareness in the run-up to the G8 summit held in Hokkaido with the slogan “Save the Drift Ice, Save the Earth.” Indeed, drift ice loss did gain a lot of media attention at the time, but in 2009 the problem seems to have been over-looked.

However, in order to slow the rate of drift ice loss, what is really needed are global steps to ensure steep reductions in emissions, to get the atmospheric concentration of CO2 down to and stabilize it at around 350 ppm, as some recommend (it is currently approaching 390 ppm).

Hence, we really need to see an ambitious deal at the December 2009 Copenhagen negotiations.