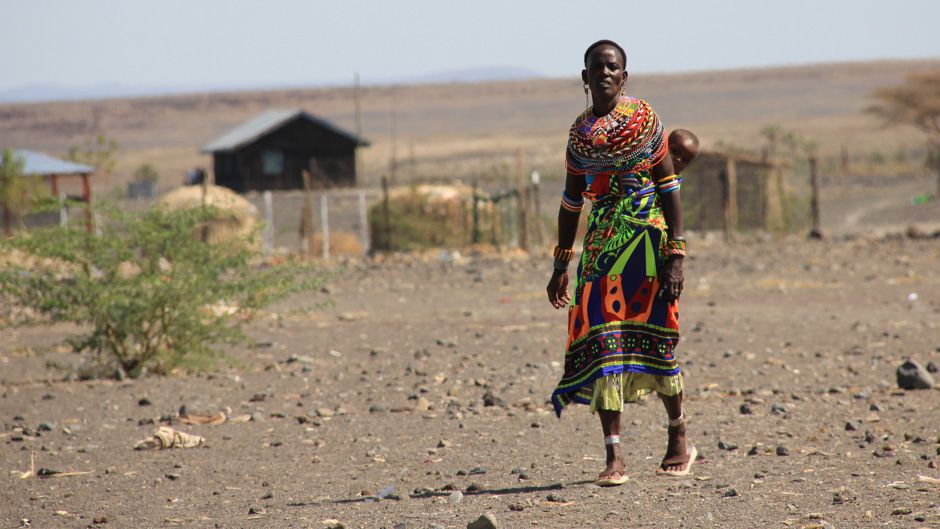 Salima village lies on the main route to Loiyangalani, on the eastern shore of Lake Turkana, allowing women and children to beg for food and water from passing traffic. There is very little in this remote, arid area of northern Kenya, on the fringes of the Chalbi Desert. It is one of the poorest places in one of the poorest districts in the country.

Home to tribes of semi-nomadic pastoralists, years of paralysing drought have killed off many of their animals. Most of the men have left for the towns in search of work and the few that remain are out amid the scattered acacia trees and black lava rocks hunting for water and pasture for the goats and sheep that are still alive.

Decades of lack of investment and neglect in this area mean many of the women and children are dependent on food aid from international non-governmental organisations. There are no tarmac roads and the “dry weather roads” that exist get washed away in the wet season. There is little access to healthcare or education and the lack of water and pasture has seen an increase in the number of raids on livestock and inter-ethnic conflict. The area is known for its insecurity; guns, slung across men’s shoulders, are a common sight.

Yet there is one thing in abundance in this desolate spot: wind.

And this wind, blowing south from the Sahara and the Ethiopian highlands, might change the future for these people — or at least that is what they’ve been promised.

Close to the border with Ethiopia, this is in fact one of the windiest places on earth, according to experts. Attracted by its potential, a consortium of Dutch and Kenyan investors, led by the African Development Bank, has leased a parcel of land upon which they intend to build Africa’s biggest wind farm, at a projected cost of 585 million euros.

The consortium — Lake Turkana Wind Power — hopes to erect more than 350 towering wind turbines in the desert expanses near the shores of Lake Turkana, the world’s biggest permanent desert lake. LTWP aims to produce 300 megawatts (MW) of electricity per year, boosting Kenya’s energy supply by 30 percent. The idea is that this will in turn boost the Kenyan economy while aiding development and reducing poverty in the area.

[quote quote=”There is one thing in abundance in this desolate spot: wind. And this wind, blowing south from the Sahara and the Ethiopian highlands, might change the future for these people – or at least that is what they’ve been promised.” ]

It is not a bad argument on paper. There is no denying that Kenya needs more sustainable energy. More than 80 percent of the country has no access to grid electricity. This is even worse in rural areas where only 4 percent of households are on the grid.

The people in Salima village, the only village that falls within the acreage of the LTWP project, are among the 96 percent without electricity. The reality means darkness after sunset and no electricity for things many people take for granted: light, cooking, water pumps, radio or television.

An average Kenyan family spends 20 Ksh ($.25) on kerosene every night, a total of $91 per year, according to Erik Hersman, a Nairobi-based technologist and blogger, so cheap, sustainable alternatives are welcome. More widely, education, agricultural improvement and expansion of municipal water systems all require abundant, reliable, and cost-effective energy access.

According to a World Bank report, energy is listed among the possible obstacles to Kenya’s full industrial take-off. More energy is needed to feed current economic growth and accelerate it further.

Around two thirds of Kenya’s energy currently comes from hydropower — which is good until the rains fail. Prolonged droughts in 2009 caused riverbeds to dry up and crippled the country’s hydroelectric plants, bringing rolling blackouts around the country, from industry centres to shantytowns, forcing manufacturers, businesses and industry to reduce outputs.

The cost of the lack of a reliable power network is passed on to the people. Kenya spends a substantial amount of foreign reserves to import oil. The oil import bill in 2008 consumed 55 percent of the country’s foreign exchange earnings from exports, according to a research paper by Jeremiah Kiplagat, a researcher at the Department of Energy Engineering at Kenyatta University in Nairobi. As result, energy prices have soared, hitting residents and businesses alike, and supplies are still unpredictable.

Because of the integral role that electricity plays in supporting economic and social development, funding of rural electrification can be seen as a core method for addressing poverty.

But what impact will the LTWP project make on the local, rural community? In a 2009 AfDB report backing the project, many promises were made, including new roads, employment opportunities, installation of two sub-stations in Loiyangalani and Maralal to distribute electricity, access to good quality water and development of health and education facilities.

[quote quote=”Lake Turkana Wind Project has only been negotiating with elite members of the community based in Nairobi and neglecting the grassroots community whose lives will be greatly affected by the project once it commences.” author=”Mark Ekale, Councillor of Loiyangalani” ]

Mark Ekale, the elected councillor of Loiyangalani says the community has not been given enough information about the project and how it will affect them. “Lake Turkana Wind Project has only been negotiating with elite members of the community based in Nairobi and neglecting the grassroots community whose lives will be greatly affected by the project once it commences,” he said. He says a lot of promises made in 2009 have not been realised. “The management of the project do not send updates as often as they should.”

Part of the problem is that the project has been stalled several times. It was originally expected to be producing energy by June this year, scaling up to full capacity by 2012. However, due to delays in confirming the funding model (the government of Kenya was unwilling to guarantee the project, as originally agreed, eventually offering a letter of support for the private venture), the wind turbines are only expected to be installed next year with the first of the power generated in 2013 and full capacity by 2014.

“At inception, private backed development projects are normally packaged up in very rosy terms so as to make them appear more efficient compared to government-led and initiated projects,” he explains. “In essence this is a good pitch for the market sentiment especially when the approach in a neo-liberal model is to push for private sector growth.”

He says not enough detail has been given to show how the promises will be achieved.

“If you remove the hyperbole, major questions emerge. How about the locals or the nearby areas? How will they benefit from [the project]? How will the villages join the grid? How will the developmental component of the project be enhanced?”

While full details have not been announced, LTWP director, Chris Staubo, says a 20-year corporate social responsibility plan will be put in place funded by a percentage of the project’s profits at no cost to local communities.

“They will get an upgraded road 204 km to the site, which as you know is not very accessible. We will put in a transmission-line to the local communities — the immediate ones we anticipate are Loiyangalani, South Horr, Kulal, Gatab and Kargi — whereby a transformer to the villages will be put in place. But final connection to the households will be done by KPLC [Kenya Power and Lighting Company, of which the government of Kenya holds majority shares, along with power generating company KenGen] under the rural electricity programme as we are only allowed to generate not distribute.”

When the project was announced in 2009, one of the most anticipated elements among the local community was the creation of new jobs. People are now asking what type of jobs they will be. Will they be sustainable? And will training be offered so that local people can learn new skills and lift themselves out of poverty?

Two years on only 25 local people are currently employed on a permanent basis. Mr. Staubo says they estimate that around 2,500 people will be employed in total for construction — but that not all of these will be local. “The local community will be a priority,” he says, “but certain skills must be there [for them to do certain jobs]. Although menial, basic work will pretty much all be local.”

Peter Njeru, an environmental activist at the charity Food for the Hungry, fears the negative impact of the project on the indigenous communities will outweigh the gains.

“First, local communities might not benefit from the power generated, second, the scale of the project site means reduced grazing land, third, concentration of people around the area will increase human activity leading to degradation of the land and lastly noise pollution from the turbines will definitely affect the residents.”

Mr. Staubo points out that building the wind farm presents a risk to investors. Apart from the wind turbines themselves, roads need to be built to bring the turbines to the site. In addition, the project requires the construction of a 427 km double circuit transmission line between Loiyangalani and the nearest point to the national grid at Suswa, approximately 100 km from Nairobi.

[quote quote=”One thing is clear for the people of the Loiyangalani region: the wind that has always whipped across their land is one of the only hopes they have to help pull themselves out of poverty.” ]

“Currently the technical skills are not available and the project developers have spent six years of their risk and capital to make it work. Huge risk… This is the first wind-power power purchase agreement (PPA) done in Kenya. The government takes no risk, no guarantees and gets power and a lot of tax payments.”

In May this year the project received approval to earn carbon emissions credits under the UN’s Clean Development Mechanism — the fourth project in Kenya to get approval under the CDM. Part of the carbon credit revenue will be returned to the government of Kenya, LTWP has said.

UN Secretary General Ban Ki-moon has spoken about the role renewable energy can play in leading poor countries to higher standards of living. The ability to earn carbon credits to help fund infrastructure projects is one aspect of this and helps mitigate the risk for investors.

What the risk really is — for investors, the government and the local people — and what the returns will be will not be seen until the project is operational.

However, beyond talk of CDMs and carbon credits, funding options and transmission lines, one thing is clear for the people of the Loiyangalani region: the wind that has always whipped across their land is one of the only hopes they have to help pull themselves out of poverty. They rely on journalists, researchers and activists to hold the company and government to account to make sure their promises are kept.

This is a story from Panos London, an organisation that seeks to foster sustainable and equitable development by ensuring that the perspectives of the people most affected by development are included within decision-making.

Evelyn Kahungu is an independent filmmaker and producer based in Nairobi. She currently works at Frontier Films and Al Jazeera as a producer, travelling around East Africa. She recently travelled to Mogadishu and Dadaab on assignment.