A Morning in the Life-giving Bangweulu Swamps 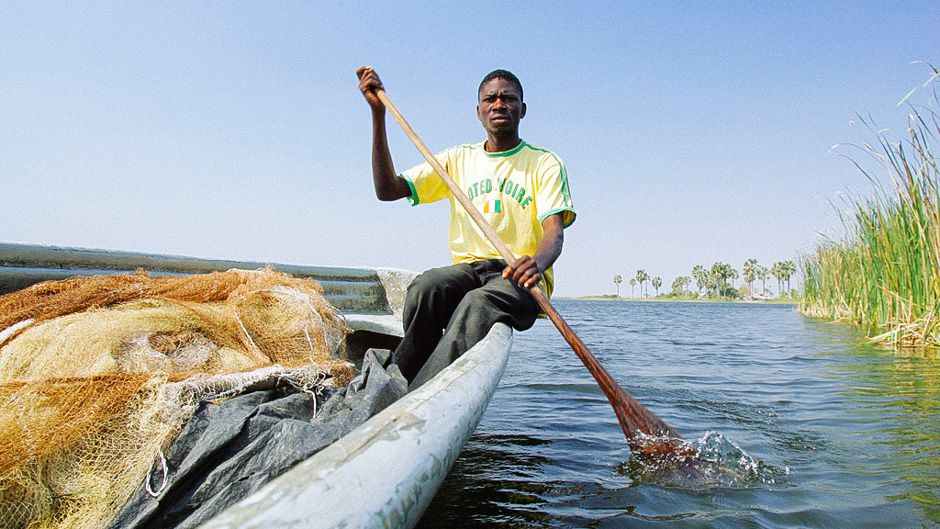 ‘Human Dimensions‘ is the in-house biannual magazine of The United Nations University International Human Dimensions Programme on Global Environment Change (UNU-IHDP). As part of each issue of ‘Human Dimensions’ UNU-IHDP invites young scholars to participate in a topical writing contest. For the second issue, published in January 2013, the contest theme was the ‘human dimensions of biodiversity and ecosystem services’. The following article is the first place entry, published in the issue: House of Cards: The perilous state of global biodiversity.

Mwenda Chishinge is an old man. His weathered body a wrinkled shadow of the powerful man he used to be, his back bent and stiff, he poles his wooden dugout canoe silently through the shallow, grassy water, the only sound being the rhythmic dipping of the pole. The motions of poling the narrow dugout boat appear effortless, his sinewy arms automatically making the motions and his strong legs, bent slightly at the knee, helping to balance the precariously narrow craft, hewn from a single tree trunk.

Having had a lifetime to hone the mundane task of paddling, his mind was free to wander while on the long trips out to his fishing nets. Leaving behind the cluster of grass huts built on platforms of floating swamp vegetation, the sun’s first rays began to take the evening’s chill out of his limbs. Children were huddling in the sun, while chickens busied themselves on the little floating islands the people were living on. He pointed his canoe out towards the narrow channel leading deeper into the swamp and the shallow pools where his nets and hooks were set.

He pondered the clear, sunlit water as he glided across it, the gentle current bending colourful red and green aquatic plants. Shoals of small fish swam ahead of the canoe, darting in and out of the plants. The rains had been heavy, the floods early. Good for the fish, he thought; they will have had a good spawning season and the little ones would be growing quickly in the warm, shallow floodplains. 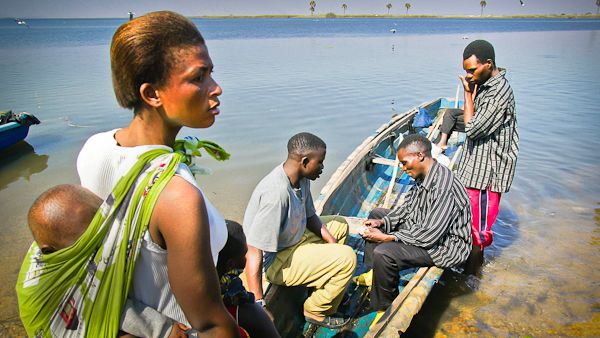 The fishing families were grateful for the rain, though it made life in the leaky grass huts miserable. Soon though, the long dry season would begin and the water levels would fall. In a few days he would call the family together to start fixing up their fish weir. The women would cut reeds for trap baskets, and the men would have to patch gaps in the low earth wall, and raise its height in places where the water flowed over. He had already surveyed the part of the plain owned by his family, and there were good numbers of fish on it. Their work would be to ensure that most of the fish remained enclosed, so that when the dry winds started, the year’s fish crop would migrate through the reed traps set in the weir.

He hoped the spiritual leader, the Chipupila, would bless the family’s weir this year. He doubted it though; the young man seemed more interested in collecting tribute from the fishermen than in practicing the rituals learned from his deceased uncle. Would the chief, too old and frail to personally check on his chiefdom, even receive this tribute?

The channel led Mwenda around a bed of tall reeds. On the other side, he surprised a small group of black lechwe antelopes. The animals ran off, sending glistening walls of spray into the air as they leapt through the shallow water. Their long hooves helped them run through the soft mud of the shallows, powerful hind legs boosting them through the deeper parts. At a distance the herd stopped and looked back at him, white ears swivelled forwards. The nose of the dark black bull was high in the air trying to catch his scent, its long curved horns laid gracefully over its back. Mwenda noticed there were a good number of calves following the females. The animals were definitely increasing.

As a child, he remembered hearing of the large bark fibre nets his tribe had used to catch these antelopes, but for a longtime now they were protected. People still came to the area to kill animals for their meat, despite the risk of being caught and jailed by the government game guards. His clan had always fished, and had no trouble with the conservation authorities. In the distance he could make out the tops of the trees at the tourist camp. Sometimes he would pass the camp’s boat on the channels, invariably heavily loaded with mountains of the visitors’ things. He’d heard that these tourists were from very far away. Did they not have animals where they came from? What had they done with their swamps and rivers? Could it be that their towns, their business, their “things” had ended all of that for them?

Reaching his first net, he sat down in his canoe to rest. He leaned over and lifted the top line, the cork floats made from the bark of a woodland tree bobbing to the movement of the net. Hand over hand he pulled the short net in, the baked clay ball weights clonking against the wooden side of his boat. It was a good catch—if his other nets held the same amounts there would be enough to eat with a few extra to smoke-dry for sale.

Pushing off again, Mwenda headed to the edge of a pool covered with water lilies, where a green reed stem marked the spot where he had tied his long line of hooks. A flock of ducks whirred overhead, but his thoughts remained with the dry fish that formed the basis of their economy. 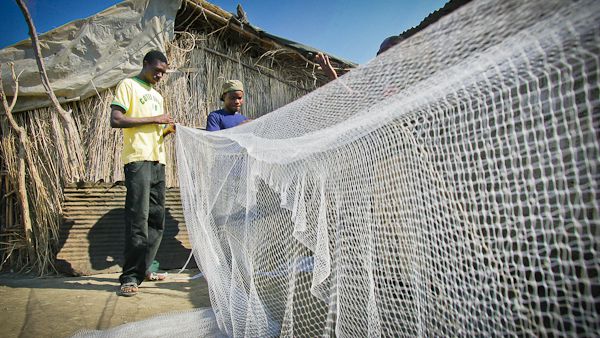 Fishing had changed; there were so many new methods and materials. It used to take weeks to knot a net with root bark fibre. Now nets were cheap. The main change he noticed now was “fishing for business”. He wasn’t concerned about the amount of fish being caught. No, only the rains and floods would determine whether catches would be good or not. He was confident that the swamps in their vastness would always be able to supply enough fish for all.

The problem was money. A peaceful bartering system with neighbouring tribes satisfied all their material requirements in the past. Now there were so many needs for money: school fees, beer, bicycles—all those things from the shops that made life a bit more comfortable. He recalled borrowing a bicycle as a young man and making a fifteen day journey through the bush to the Copperbelt mines—a scary and confusing and new place. He sold his bag of fish and was able to buy a new bicycle. He smiled at the memory of how he had proudly cycled into the village carrying the borrowed bicycle on the carrier of his new possession. Yes, it was nice to have all these things, but money also brought conflict.

Now the people were even fighting over patches of the best fishing grounds. The swamp had always provided, but they were getting greedy, wanted more business, more things. It had started because of lions; his father had told him the tale. His ancestors had kindly given refuge to residents of a neighbouring camp that had fled the terror of marauding lions. They never went back, and now outnumbered his family. His grounds had always had enough to share, but now they were aggressively trying to claim it all for themselves. The chief would try to find compromises, but he, even older than Mwenda, could also see the changes coming to society. 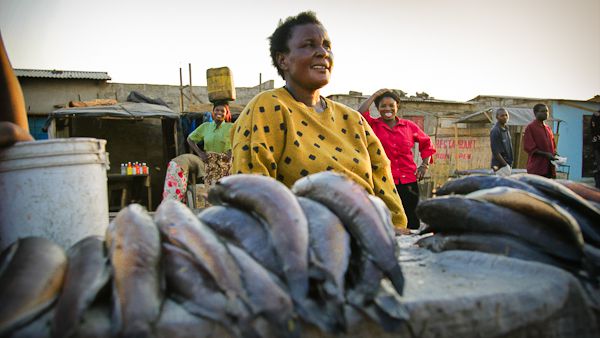 Reaching his hook line, his mind jerked back to the present. The line was twitching, and he followed its dim outline through the shady water. “Thwack!” hardly aiming, he drove his narrow spear into the spine of the hooked catfish, instantly stunning it, allowing him to lift the heavy fish into the boat without the struggle that could see it straighten the cheap shop hook. His mind flashed back briefly to the strong iron hooks the mainland blacksmiths would bring to trade for dried fish. There were a few more catfish hooked further down the line, and he speared these too. In the evening he would return to re-bait the hooks with earthworms collected by his grandchildren. He had six catfish in addition to the selection of small fish from the nets, so there would be a surplus to smoke-dry. Just as well his son had gone to the swamp edge to fetch firewood.

Mwenda only had a short way to paddle to get to his last net. Crossing the water lily pool, a brightly dressed young man passed him in a canoe with a small radio blaring out the latest popular tune. Mwenda smiled, perhaps he was off courting. At any rate he was enjoying his things that the fish had brought him. What Mwenda would have given to be fifty years younger again! He reached the next shallow bit where he’d set his net along a flooded path through the grass. Crouching in his canoe, his pole propped upright against his shoulder, his hands lifted the net and untangled his catch.

Standing up stiffly, he pushed the net back along the grass, straightening it with his paddling pole. He stopped, and looked all around. The clear skies were filled with rainclouds and in every direction birds of all types were flying by. He realized he hadn’t seen a shoebill stork in quite a while. It was always a pleasure seeing one of these giant birds silently standing next to a grassy channel, waiting for a fish to come by. It was uncanny how their massive bills and heavy brows made them look almost human; stern, but with a smile. One of his sons would visit soon from his job in town, and Mwenda knew that he would want to see one of these birds. His letter had said that he had bought a camera. Shaking his head, Mwenda shoved off and sent his canoe gliding over towards the clump of reeds, beyond which lay the channel back to the camp, and lunch.

Over the pools and reeds, far to the horizon, the breeze sighed through the long, sparse grass stems standing in the endless expanse of shallow water, and a solitary shoebill stork blinked its eye, unmoving.

This article appears courtesy of Human Dimensions magazine and UNU-IHDP.

Carl Huchzermeyer was born in the small South African mountain town of Lydenburg, in the spring of 1988. Son of a long line of veterinarians, he and his two brothers were brought up with a deep respect for nature and people.