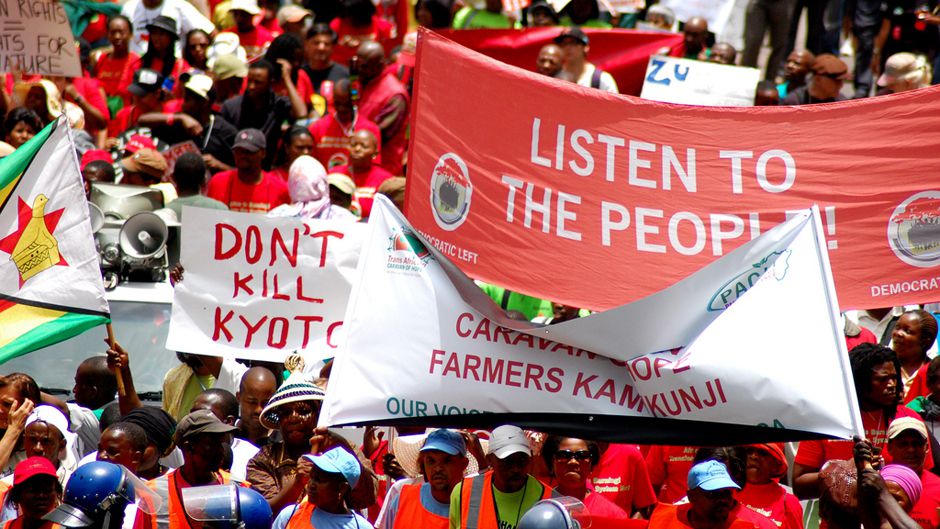 African countries fought hard for the Kyoto Protocol not to die on African soil at the 2011 Climate Change Conference in South Africa, but they say it is now languishing in limbo because developed countries are taking what they called “baby steps” towards ratification of the Doha Amendment that gave it a new lease on life.

The African Group and other least developed country negotiators at the ongoing (1-12 Dec.) UN Climate Change Conference in Lima, Peru, say they are concerned about the slow progress towards giving a legal force to the international emission reduction treaty.

“We would like to point out that slow ratification of Commitment Period Two of Kyoto by developed countries does not build confidence. In our view, the developed countries are reneging, abandoning and weakening the Kyoto Protocol,” Nagmeldin El Hassan, Chair of the African Group said at the opening of the conference.

He said failure by developed countries to ratify the Doha Amendment was forcing the least developed countries to assume legal commitments while relaxing the legal commitments of the historical greenhouse emitters. “If this is the game that some think we are ready to entertain, we must make it clear that we will not be party to this game,” El Hassan added.

In December 2012, the Doha Amendment to the Protocol was agreed, extending it into a new commitment period running from 1 January 2013 to 31 December 2020. The European Union (EU), its 28 Member States and other developed countries have ratified the protocol.

The UN Framework Convention on Climate Change, to which the Kyoto Protocol is linked, requires ratification by 144 countries before it can enter into force.

By the end of November 2014, only 20 countries had ratified the Doha Amendment establishing the second commitment period of the Kyoto Protocol. Guyana was the latest to ratify as it prepared to join the negotiations in Lima.

El Hassan told IPS that the ratification process needs to be accelerated and clear accounting rules adopted in Lima so that the amendment enters into force by the next Climate Change Conference in Paris in 2015.

African environment groups and NGOs are also calling on governments to hasten progress on ratification of the much fought for second commitment period for the Kyoto Protocol.

Mithika Mwenda, Secretary-General of the Pan African Climate Justice Alliance (PACJA) to which more than 30 Africa-based NGOs belong, told IPS that it was demoralised by the “baby step” speed of the developed countries towards ratification.

“Africans have sent their governments to Lima with urgent and creative demands to face the climate crisis,” said Mwenda. “Yet the responses of rich developed countries show no sense of urgency — they have presented less climate finance than last year, have not raised their pollution targets and have not even legally ratified the Kyoto Protocol as they promised two years ago.”

According to Mwenda, the developed countries are determined to delay their participation in the Kyoto Protocol’s second commitment period. “They are letting their national interests trump over the global common good and are opting out of multilateral rules.”

Earlier in the week, UNFCCC Executive Secretary Christiana Figueres said that both developed and developing country Parties to the Kyoto Protocol needed to save the protocol from languishing in limbo by ratifying it.

“I have said this before and let me say it again. For this international legal framework to enter into force, governments need to complete their ratification process as soon as possible. We need a positive political signal of the ambition of nations to step up crucial climate action,” said Figueres.

The African Group is pushing for ratification of the Doha Amendment because it extends a legal commitment to Annex 1 countries — members of the Organisation for Economic Cooperation and Development (OECD) plus a group of countries whose economies are in transition — to contribute towards a global effort to mitigate greenhouse gas emissions.

“Africans have sent their governments to Lima with urgent and creative demands to face the climate crisis. Yet the responses of rich developed countries show no sense of urgency,” said Mithika Mwenda, Secretary-General of the Pan African Climate Justice Alliance.

Ram Prasad Lamsal from Nepal, who chairs the LDC Group, told IPS that “ratification is essential for the Kyoto Protocol to continue serving as a cornerstone of the multilaterally agreed rules-based system under the [Climate Change] Convention and a full reflection of its principles of equity and common but differentiated responsibilities.”

However, while the African countries are pushing their developed country counterparts to ratify the Doha Amendment, just four of them had ratified it by the end of November — South Africa, Sudan, Morocco and Kenya.

A delegate from European Union speaking on condition of anonymity wondered why the African countries — as well as the LDC Group, the G77 and China — were not ratifying the second commitment period as they mount pressure on developed countries.

“But even if all the African countries ratified, it still cannot enter into force before our colleagues do it. They have the bulk of the emissions to cut. The issue is not that Africa has lagged behind, the big emitters don’t seem to be coming forward,” said Isabirye.