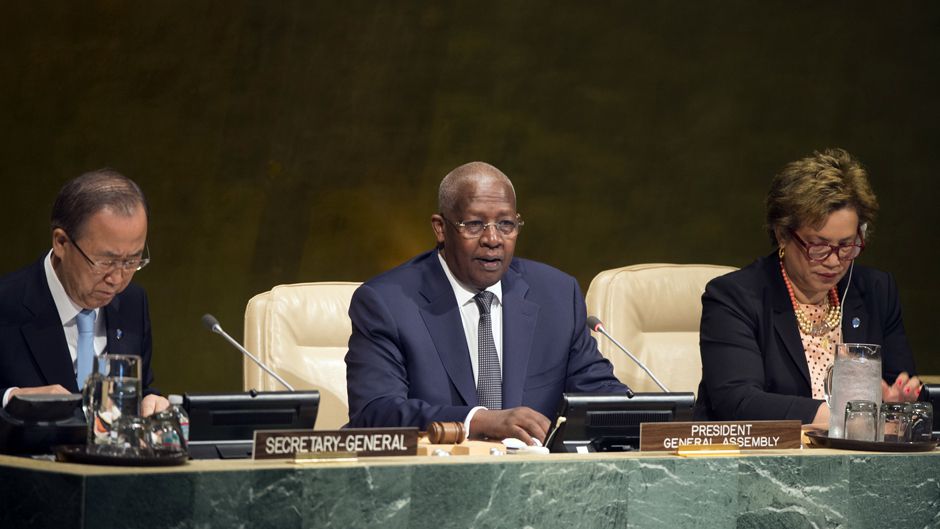 Senior United Nations officials today called on the international community “in the name of our shared humanity to unite in courage and resolve” against intolerance at a critical time when people, communities and nations are grappling with disparity and radicalism.

However, with “troubling frequency” violent attacks and despicable crimes are being carried out and claiming the lives of innocent men, women and children. From Paris to Tunis, and from Garissa to Yarmouk and Johannesburg to Peshawar, “no person, society of nation is immune” from intolerance or the threat of violent extremism, he added. In places like Iraq Afghanistan and Mali, irreplaceable artefacts are being destroyed.

“There is no justification for such attacks. We must condemn all manifestations of intolerance, including anti-Semitism, Islamophobia and racism,” and all other forms of prejudice, harassment or violence, the General Assembly President said.

Today’s gathering brings together leaders representing Islam, Judaism, Christianity as well as ministers, academics, clerics and spiritual leaders to discuss ways to foster peaceful, inclusive societies and counter violent extremism. In line with that agenda, Mr. Kutesa said that given today’s globalized world it is incumbent that world leaders — be they political, religious, or spiritual — work together to address serious challenges posed by violent extremism.

Divisions foster discontent and societies that fail to be inclusive foster radicalization. Addressing the challenges of poverty and lack of education can form a holistic approach for peaceful society and foster the environment for future development. Lack of the rule of law and ethnic, national and religious discrimination can also contribute to intolerance, said Mr. Kutesa.

On the flip side, faith and interfaith collaboration as seen throughout history can build trusting relationships, he said. Many religious leaders have emphasized the need for peace and tolerance. And concerted efforts should be made to support these religious leaders to help them spread their message of hope and peace and stamp out bigotry, racism, and intolerance.

“We must promote dialogue, mutual understanding and strengthen the principles of freedom,” Mr. Kutesa said, underscoring the role women, youth and the media play in fostering tolerance.

“In the classrooms around the world, we should emphasize values that are rooted in the principles of dignity and respect…and within our families, we not only have the opportunity but indeed the obligation to teach our children how to treat each other with kindness and respect,” he added.

Taking to the General Assembly podium next, Secretary-General Ban Ki-moon said that “too many communities have been shattered and too many people have been cynically pitted against each other.”

As such stories become all too common the world must stand up toward the threat of intolerance and radicalism. “Violent extremism is a global test and our response must solve the problem,” Mr. Ban said.

D’aesh, Al Shabaab and Boko Haram are part of a new generation of terrorist groups threatening international peace and security but the problem goes beyond them and the regions in which they operate. Racism, anti-Semitism, Islamophobia exists worldwide and to protect the innocent “we must safeguard our moral compass,” he said.

Abuses committed in the face of anti-terrorism only allow terrorists to gain more ground. “The formula for disaster is clear,” Mr. Ban continued. “When insecurities and frustration are fuelled by leaders who exploit differences the result is mistrust” that is likely to erupt in violence and extremists take advantage of this.

Member States must “honestly confront our own faults,” the UN Chief emphasized, calling on States to consider how their actions cause breeding grounds for brutality and any economic measure that may also be at play.

We cannot leave on the margins any person — women, the disabled, indigenous, poor and vulnerable. We must lay foundations for accountability even as we work for peace. Past violations must be addressed because without transitional justice tensions will deepen just as society is heeling, the Secretary-General warned.

“Throughout history, there have been brave individuals who have transcended their identity, risked and gave their own lives for what they knew was right and in the process they inspired others to take the same course,” Mr. Ban added.

Addressing the General Assembly next, Nassir Abdulaziz Al-Nasser, High Representative of the UN Alliance of Civilizations (UNAOC), said that tolerance and reconciliation are values inherent in all major faiths. But “sadly for the past few years we have witnessed unimaginable violence, terrorism and atrocities in the name of religious,” he pointed out.

“Today, the United Nations is writing history. This meeting is a step in the right direction,” Mr. Al-Nasser added.

“The reason we are here is to hear from you, political and religious leaders in how we can counter extreme violence and prevent relapsing whole societies into the black hole of cultural and ethnic tensions,” Mr. Al-Nasser said.

“We know from our experiences, from both successes and failures, that no matter how much we improve our securities, terrorism will not go away unless we address the conditions conducive to its growth,” he added.

To do so effectively, Member States need to work together across sectors and faiths, including governments, Member States, religious leaders, Muslims, Christians, Jews, Hindus, and Buddhists.

“We cannot make progress on any development without your participation,” he told the General Assembly, emphasizing that to deliver on its mandate the United Nations needs the support of the women and men who lead faith communities.

“We equally need responsible leaders of Heads of State and Governments to find durable solutions to our various crises from water access to education and from regional conflicts to fighting communicable diseases,” he said, adding that “no nation can succeed alone in these tasks.”

“We need to protect our future and our generations from the forces that fuel tensions, hatred and violence,” he said.