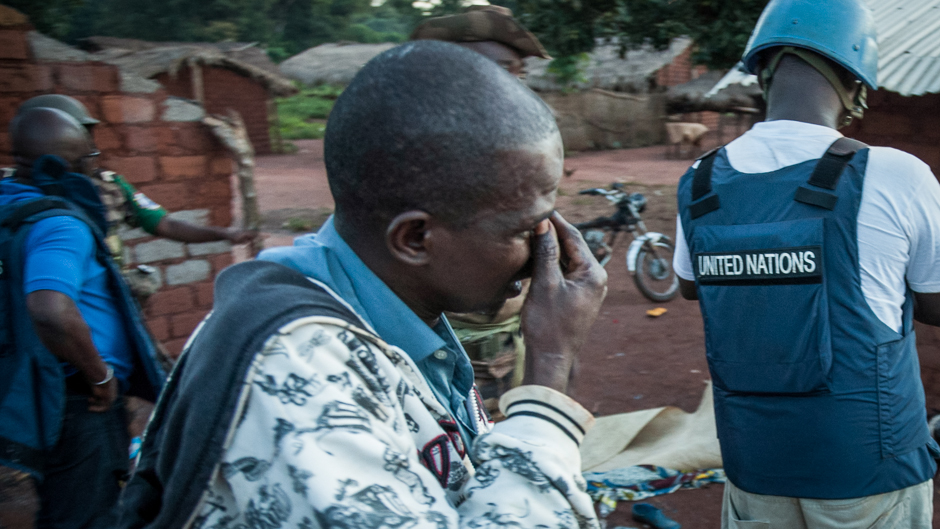 A man cries after surviving an attack on his village between Bossangoa and Bossembele, Central African Republic. Photo: UNHCR/ B. Heger, CC BY-NC 2.0 (cropped).

The crisis in the Central African Republic (CAR) has cost the lives of thousands of people and displaced 1,000,000. Since late 2013, the situation has progressively worsened, as violence has become normalized. The most recent bloodshed, however, is essentially a continuation of the Central African Republic Bush War, which began when regional forces helped François Bozizé oust then-sitting president Ange-Félix Patassé in 2003. At a more fundamental level the war is also the result of a long and fraught history of predatory French colonialism and a set of equally predatory exclusive post-independence regimes.

The country’s last true president, Bozizé (2003-2013), was no different. The Séléka rebellion, which ousted him on 24 March 2013, emerged as a response to the specific neglect and underdevelopment of Northern Muslim communities and the failure of the Bozizé government to implement power-sharing arrangements.

After ousting Bozizé in March 2013, the Séléka (meaning ‘unity’ in Sango, the primary language spoken in CAR) brutally murdered, looted and pillaged communities across the country — most notably in the neighbourhoods of Bangui — the capital of the Republic. This in turn triggered retaliatory violence from Christian anti-Balaka (“anti-machete”) militias, leading to a cycle of violence that rapidly morphed into a sectarian conflict bringing the CAR, by December 2013, to the ‘verge of genocide’. However, at its heart, the conflict in CAR is not a religious contestation, and to describe it as such would be a denial of the myriad roots of complex conflict.

In late 2013, the United Nations, African Union (AU) and European Union (led by France) finally mustered the political will and began to seriously respond to the crisis. By this stage, a religious cleansing had begun in earnest, as Muslims were lynched in the streets and driven out of their homes and into the North.

The response to the crisis gained momentum with the establishment of the African Union’s International Support Mission to the Central African Republic (MISCA) and the deployment of French troops under Operation Sangaris, both operating under Security Council mandate. The UN has also had a long-standing presence in the country and currently has a special political mission deployed: the UN Integrated Peacebuilding Office in the Central African Republic (BINUCA). Regrettably, BINUCA completely failed to foresee, and then respond to, the looming crisis — a problem not unique to BINUCA.

Amidst the humanitarian crisis that is characterized by cycles of violence, mass crimes and large-scale displacement, this patchwork of peace operations — devoid of any real political strategy — operated to ameliorate the situation as best they could. Yet, there appears to have been a number of missteps including the hasty disarmament of Séléka fighters — which only served to empower their adversaries, the anti-Balaka.

Since assuming office, the new interim president has also made clear her preference to transform MISCA into a UN peacekeeping operation. Such a mission has been in the pipeline for some time, but the key bone of contention is cost — as the new mission will likely incur an annual cost in excess of US$500 million. A new report from Secretary-General Ban Ki-moon calls for the establishment of a UN mission to the country — a force that will replace both the current UN political mission (BINUCA) and the AU mission MISCA.

Strategic: The mandate must be strategic — in other words, it must define the political end state. Through the mandate, the Security Council should provide a level strategic political description. To these ends, a coherent strategy to guide international efforts to support CAR should be placed at the top of the priority list. As my previous article suggested, the tasks of the new mission should be limited. A limited mandate should concentrate efforts on the highest order priorities — the establishment of security and a political compact.

Political compact: The mission will be operating without a foundational peace agreement, so it must help support the interim government to develop a national political compact — a top-down approach. Successive presidents monopolized power, divided the spoils among their clients (drawn from the same ethnic group as the president), and kept the security forces weak (for fear of a coup). President Patassé, when in power (1993-2003), also introduced a polemical politics that sought to divide the country between the ‘people of the savannah and the people of the river’.  An inclusive political compact must seek to break the cycle of state capture and address some of the fundamental roots of ongoing instability. The compact will also need to address the de facto partition of the country, which risks permanently dividing the country between Christian communities in the Southwest and Muslims in the Northeast.

Community level: At the same time, the mission should decentralize — a bottom-up approach. A community-oriented, close-to-the-ground model could be used to empower transmitters of non-violent social norms in an effort to break the cycle of violence and open up the possibilities for reconciliation at the local level. Empowering the inter-faith dialogue is also a necessity.

Security: Extended security operations are required to rapidly fill the public security vacuum and tackle lawlessness, in Bangui and beyond. A large police contingent is therefore required, (the Secretary-General’s report has suggested 1,820 police will be deployed) as well as a strong Security Sector Reform presence to jump-start the new security forces. In the past, as previously mentioned, the military has been used to consolidate the power of the president and has been deliberately weakened as an insurance policy against coups d’état. It is therefore necessary for the UN mission to help reconstitute the security forces.

Disarmament: A key element of the mission’s security efforts should be the coordinated mutual disarmament of the armed groups that currently roam the streets in Bangui, provincial centres, villages and the open savannah. The practice of disarmament will need to be highly localized, as the catch-all terms anti-Balaka and Séléka deny local group distinctions.

Military component: It is certain that the new mission will be mandated under a Protection of Civilians (PoC) operating clause. As a rule of thumb, most new missions with a PoC mandate must have a troop strength in excess of 10,000. The Secretary-General has indicated in his report that the new mission will have a troop strength of 10,000 and will operate under a robust mandate focused on protection of civilians. Yet, for the mission to be effective, troop strength must be backed by the appointment of a strong commander, adequate force mobility, and a superior intelligence gathering capacity. The current AU force, MISCA, has a troop strength of 6,000, while the EU will deploy a further 1,000 troops to support the 2,000 French troops that currently operate under Operation Sangaris. The UN will be looking for a further 4,000 troops for rapid deployment. A recent expansion of the UN Mission in South Sudan adds further pressure to the UN’s force generation processes. As mentioned, the EU Force (EUFOR RCA) also forms part of the equation and will provide much needed capabilities, as well as the firepower required to deter spoilers. Two military commands operating in the same environment is a textbook no-no, so in order to make such an arrangement work both missions must be joined at the hip.

Regional: There is also a regional dimension to the conflict that must be factored into the equation. An appreciation of the regional dimensions of the conflict should be welcomed as part of the political compact and should include Chad, the Democratic Republic of the Congo (DRC), Sudan, South Sudan and Cameroon. At this stage, it appears that Chad is playing a key role in attempting to resolve the crisis. Engaging Chad is key to the stability of CAR, particularly its North-east quadrant.

Leadership: The current Special Representative of the Secretary-General (SRSG) for BINUCA is Babacar Gaye (Senegal) ― a former UN Military Adviser and Force Commander for MONUC in the Congo. It remains to be seen whether he will remain as the UN’s SRSG in CAR at this stage.

The deployment of the new UN mission in CAR will push the envelope, at a time of expansion for the UN — in Mali, South Sudan and the DRC.

To take the upper hand, the new UN mission in CAR must assert itself rapidly (within the first 12 weeks of deployment) by quickly filling the public security vacuum. It must also then get on with the job of assisting the country’s leaders to forge a political compact that will address the ills of CAR’s political culture.

It won’t be easy, but the UN is rarely given easy tasks.

Central African Republic: Factors and Prospects of a New UN Mission by Peter Nadin is licensed under a Creative Commons Attribution-NonCommercial-ShareAlike 4.0 International License.