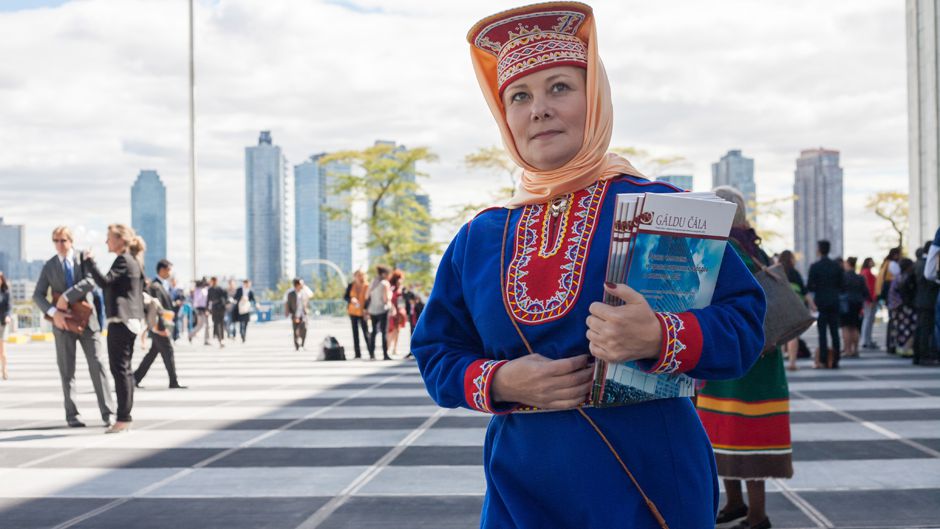 Opening today the first-ever World Conference on Indigenous Peoples, United Nations Secretary General Ban Ki-moon said that deliberations and decisions made during the two-day event will reverberate across the world, with concrete impacts on the lives of millions.

“The success of this Conference is integral to progress for all humanity,” Mr. Ban said today as he opened the World Conference at UN Headquarters alongside General Assembly President Sam Kutesa, and UN High Commissioner for Human Rights, Zeid Ra’ad Al Hussein.

Convened as a first high-level plenary meeting of the General Assembly’s 69h session, the two-day World Conference brings together over a thousand indigenous and non-indigenous delegates to discuss the realization of their rights, including pursuing the objectives of the UN Declaration on the Rights of Indigenous Peoples, adopted by the Assembly in 2007.

“Indigenous peoples are concerned about issues that top the global agenda. They are deeply connected to Mother Earth- whose future is at the heart of the Climate Summit opening tomorrow,” said Mr. Ban.

He recalled meeting with indigenous leaders in Costa Rica, where they shared with him their worries about land, resources and their rights. And just last month in New Zealand, Mr. Ban said he spent a day in Tuapo with Maori leaders where he was impressed by their multimillion dollar horticulture, waste management and energy production companies.
“I will never forget how every bit of waste is fed to worms that create very rich organic fertilizer. This is sustainability in action. It showed how much the world can learn from indigenous peoples,” Mr. Ban said.

Today’s Outcome Document — an action-oriented text on implementing the rights of indigenous peoples — must bridge the gap between promises and results, he said of the measure, adopted during the Conference’s opening ceremony.

Echoing that sentiment, General Assembly President Kutesa said more could be done at the national level to improve the conditions of indigenous peoples as there continues to be a “deep chasm” on the ground between commitments and reality.

“This will require Member States to make greater efforts to translate this Outcome Document into reality and demonstrate resolve in addressing inequalities that adversely affect indigenous communities,” Mr. Kutesa added.

The UN indigenous Peoples’ Declaration represents a global consensus and has galvanized international attention of the rights of indigenous peoples, but today’s gathering takes it further.

Also addressing the Assembly today was Ms. Dalee Sambo Sorough, Chair of UN Permanent Forum on Indigenous Issues, who said long after the Conference ends, the spirit of partnership must continue to thrive at the regional and national levels, but perhaps most importantly, at the local level among indigenous peoples themselves.

Only this “spirit of solidarity” will provide support needed to implement the Outcome Document.

“Indigenous peoples’ right to their land and resources remains essential to their survival,” Ms. Sorough said, adding that good governance cannot become a casualty when a few states or even one State undermine principles of equality and democracy.

Indigenous peoples represent remarkable diversity — more than 5,000 distinct groups in some 90 countries, making up more than 5 percent of the world’s population, some 370 million people. These peoples continue to self-identify as distinct peoples with strong links to traditional territories with their own social, economic and political systems as well as unique languages, cultures and beliefs.

Aboriginal People – How to Misunderstand Their Science