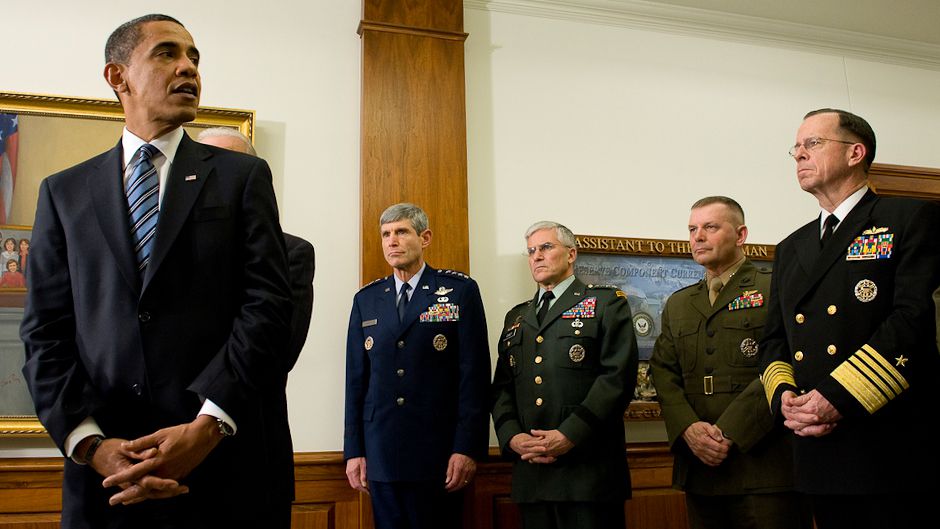 The U.S. Army's Office of the Chief of Public Affairs.

Federal legislation to combat climate change is quashed for the foreseeable future, scuttled by congressional climate cranks who allege the climate-science jury is still out. What’s become clear is that, for some, the jury will always be out. We can’t stack scientific facts high enough to hop over the fortified ideological walls they’ve erected around themselves. Fortunately, though, a four-star trump card waits in the wings: the US national security apparatus.

In 2006, I participated on a panel at the United Nations climate change conference in Nairobi called “Communicating Climate Change“. With Intergovernmental Panel on Climate Change chair Rajendra Pachauri and respected Arctic scientist Pål Prestud on board, we aimed to figure out ways to convey climate change and its effects with greater precision and weight.

An hour before the panel commenced, we learned the communications director for climate curmudgeons, Senator James Inhofe (Republican, Oklahoma) had elbowed his way onto the rostrum. Bleating bias – the panel skewed toward the widely held scientific consensus that climate change is real and humans are causing it – the infiltrator proceeded to hijack the panel. Rather than engaging the topic at hand, he questioned the scientific existence of climate change, levelled ad hominem attacks against various panellists, while brandishing “A Skeptic’s Guide to Debunking Global Warming Alarmism” (a document produced by his office).

During the discussion period, the largely international audience responded in good faith, attempting to convince Inhofe’s righthand man that the most up-to-date science undercut his worldview, that scientists weren’t a grant-hungry cabal fiending for the next funding fix. Unfazed, he didn’t budge – not a single part per million.

Five years later feels like a timewarp, with the political promise of 2006 suspended in a molasses haze. 2011 brought a fresh congressional crop content to ignore what the rest of the world accepts: the IPCC’s scientific consensus on climate change. When Henry Waxman (Democrat, California) tried to amend to the Energy Tax Prevention Act of 2011, to put the House of Representatives on record recognising that climate change is occurring, is caused in large part by humans and presents serious public health risks, it was summarily shot down. Only one Republican broke ranks and voted in favour (David Reichert of Washington state).

Enter what some might view as a counterintuitive counterweight: US military brass. A recent report, “A National Strategic Narrative” (pdf), written by two special assistants to chairman of the joint chiefs of staff Mike Mullen, argued, “We must recognise that security means more than defence.” Part of this entails pressing past “a strategy of containment to a strategy of sustainment (sustainability)”. They went on to assert climate change is “already shaping a ‘new normal’ in our strategic environment”.

For years, in fact, high-level national security officials both inside the Pentagon and in thinktank land have been acknowledging climate change is for real and that we need to take action to preserve and enhance US national security interests. The Pentagon itself stated unequivocally in its February 2010 in its Quadrennial Defence Review Report (pdf), “Climate change and energy are two key issues that will play a significant role in shaping the future security environment.” It noted the department of defence is actively “developing policies and plans to manage the effects of climate change on its operating environment, missions and facilities”.

CNA Corporation, a nonprofit that conducts research for the Navy and Marines, echoed the Pentagon’s urgency, writing, “Climate change, from the Military Advisory Board’s perspective, presents significant risks to America’s national security.” The Army Environmental Policy Institute, the National Intelligence Council and the Centre for a New American Security have issued similar reports on the dangers of runaway climate change and what it could mean for geopolitics.

This isn’t a tree-hugging festival. It’s the US military and its partners making clear-eyed calculations based on the best available climate science. So, why this quiet camaraderie between scientists and military higher-ups? The answer, most certainly, is uncertainty.

Uncertainty is an inherent element of honest science. But in the political sphere, uncertainty has been harnessed as an alibi for denial and inaction. The military, however, operates under conditions of uncertainty all the time. Like scientists, they wade through the unknown to assess varying degrees of risk. As CNA Corporation put it, military leaders “don’t see the range of possibilities as justification for inaction. Risk is at the heart of their job.”

Climate cranks – many of them the same people perpetually hectoring us about the perils of national security – are choosing to ignore the seriousness of climate change even when the national-security experts they champion are telling us to do just that. Talk about cherry-picking data.

While Congress members like Fred Upton (Republican, Michigan) yowl about the EPA’s efforts to regulate carbon emissions as “an unconstitutional power grab” and attach the term “job-killing” to every piece of environmental legislation with a political pulse, national security officials have been offering dire warnings about the perils of climate disruption and its offshoots like food shortage, water depletion and massive migration.

The House Energy and Commerce Committee, which has been holding shambolic hearings on climate change, should invite climate-minded national security gurus to testify. Perhaps they can lob some reality into the ideological fortress of denial before whipsaw climate volatility becomes our everyday reality.

This article was originally published on guardian.co.uk on Friday 20 2011.

Jules Boykoff is an associate professor of political science at Pacific University in Oregon. He writes on activism, climate change, and the politics of sports. He is the author of Beyond Bullets: The Suppression of Dissent in the United States, co-author of Landscapes of Dissent: Guerrilla Poetry and Public Space, and a former professional soccer player who represented the US Olympic team in international competition.