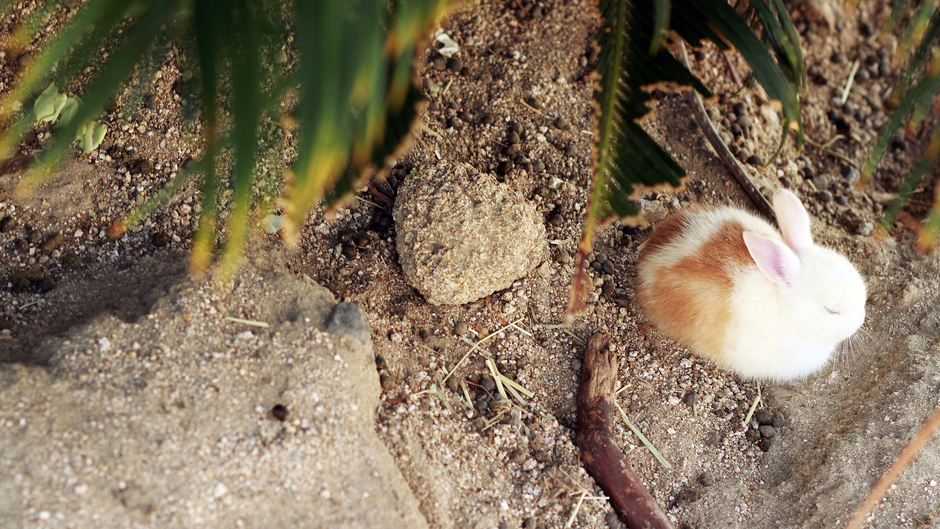 At last December’s Sixty-eighth session of the United Nations General Assembly, a decision was made to proclaim 3 March as World Wildlife Day to raise awareness of the world’s wild fauna and flora. The date is the day of the adoption of the Convention on International Trade in Endangered Species of Wild Fauna and Flora (CITES) in 1973, which plays an important role in ensuring that international trade does not threaten the species’ survival.

To celebrate the beauty and variety of animals with which we share our planet and provoke thought on our impacts on too many forms of wildlife we bring you the Guardian‘s pick of this week’s images from the natural world — from ‘Rabbit island’ to the Hollywood cougar and early spring sightings.

The week in wildlife – in pictures 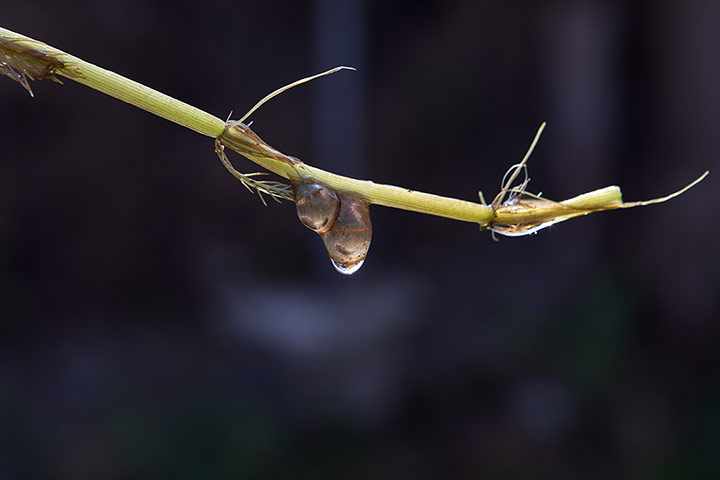 A pair of axolotl eggs, in the final stages before hatching, hang from a reed at an experimental canal run by Mexico’s National Autonomous University in the Xochimilco network of lakes and canals in Mexico City. Investigators have begun a search in the hope of finding what may be the last free-roaming axolotl. Not one axolotl was found during last year’s effort at finding them in the wild in Xochimilco, their only natural habitat. The axolotl is known as the ‘water monster’ and the ‘Mexican walking fish’. 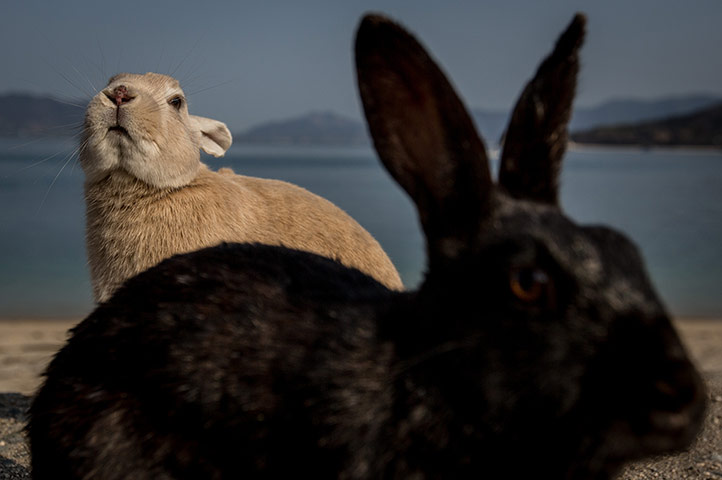 Rabbits on the beach on Okunoshima Island in Takehara, Japan. Okunoshima is a small island located in the Inland Sea of Japan in Hiroshima prefecture. Often called Usagi Jima or ‘Rabbit Island’, it is famous for its rabbit population that has taken over the island and become a tourist attraction in its own right. During the Second World War the island was used as a poison gas facility, and was so secret that it was removed from area maps. Today the ruins of the old forts and chemical factories can be found all across the island. 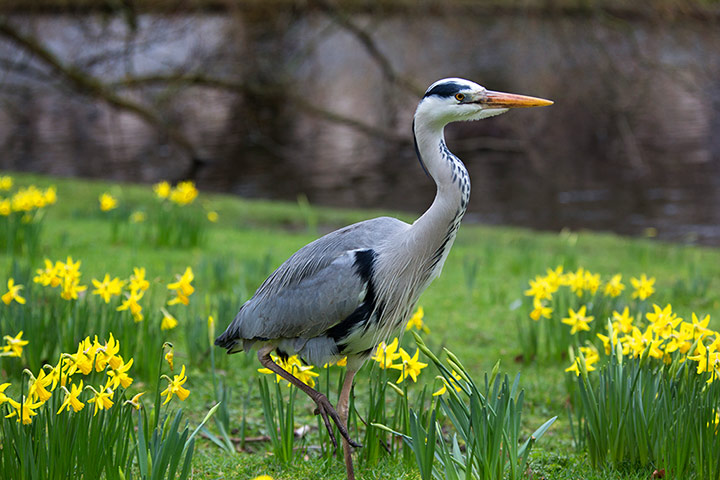 Photograph: Graham Turner for The Guardian.

Spring in Regent’s Park, London. A heron walks among narcissus. 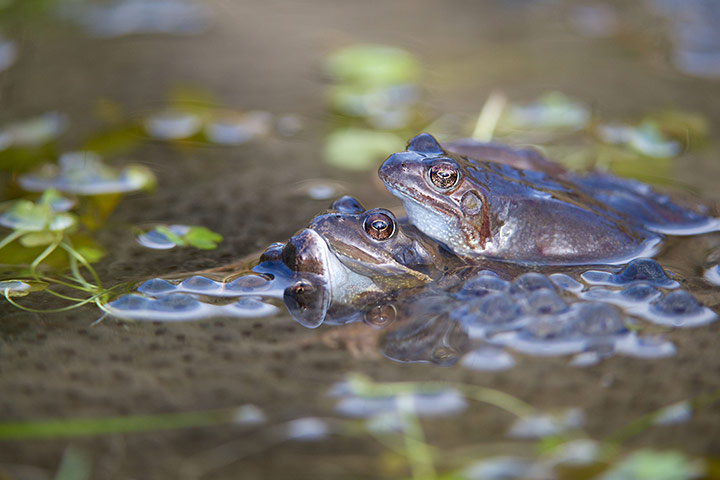 Wildlife photographer Richard Bowler spotted these common frogs (Rana temporary) spawning in a puddle up on the Berwyn mountains in Wales. ‘We came across loads of frog spawn in puddles along the tracks up there. It is a seasonal thing in Feb/March. What surprised me was that we must have been about 1000ft above sea level and very bleak, yet people I know further south have yet to have any spawn’. 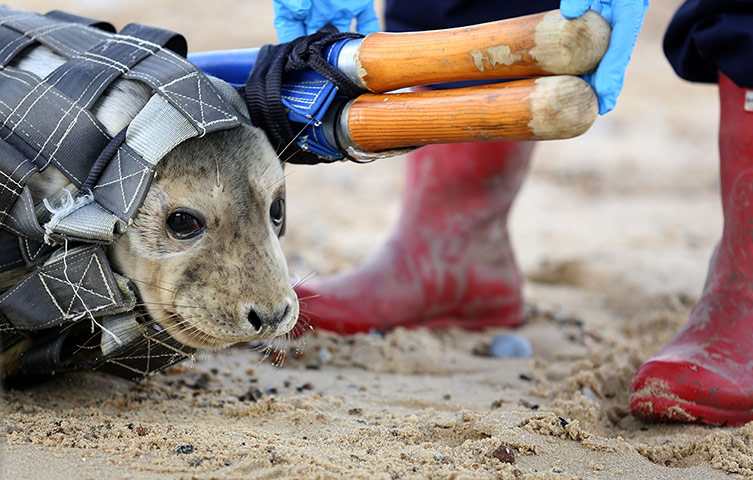 A seal pup who washed up during the December storm surge is re-released back into the sea at Winterton on Sea, in Norfolk. This week ministers were warned by a coalition of 13 wildlife groups that they are breaking environmental law by failing to prevent harbour seals from being sliced to death by ships’ propellers. 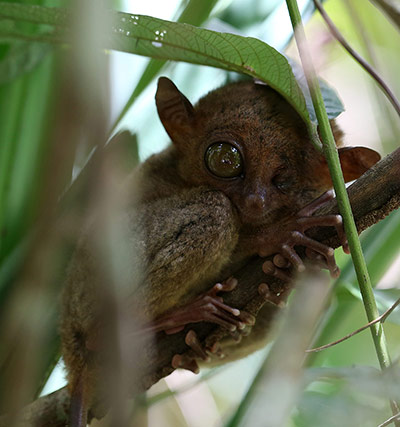 A Philippine tarsier clings to a branch in a sanctuary in Corella, Bohol province, central Philippines. After the October 7.2-magnitude earthquake hit Bohol, several frightened tarsiers stayed on the ground. These arboreal creatures live in and around the base of tree trunks, and top of the trees. There are about 1,000 tarsiers left in the hills of Corella. Conservationists warn that the fist-sized tree-dwellers, considered as the world’s smallest primates, are in danger of extinction due to increasing deforestation in the Philippines. 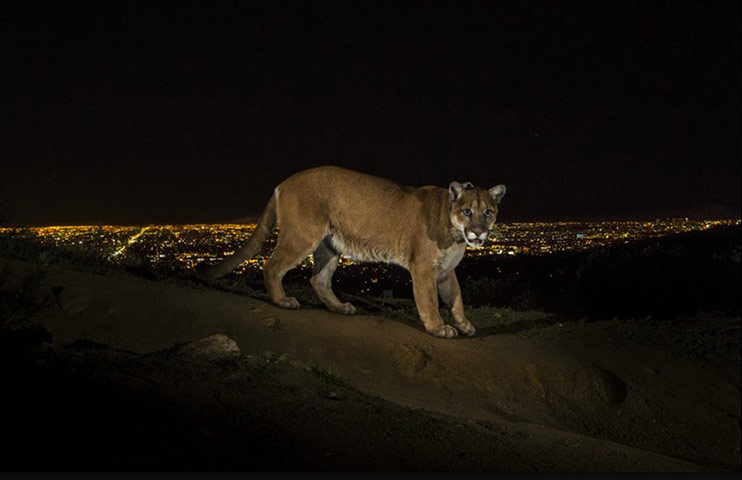 A cougar walking a trail in Griffith Park, home to the world-famous Hollywood sign on a ridge above Los Angeles. To reach the park, which has been the cougar’s home for the last two years, it had to cross two of the busiest highways in the US. Steve Winter’s series of photos won the first prize for stories in the nature category of the world press photo awards 2014. 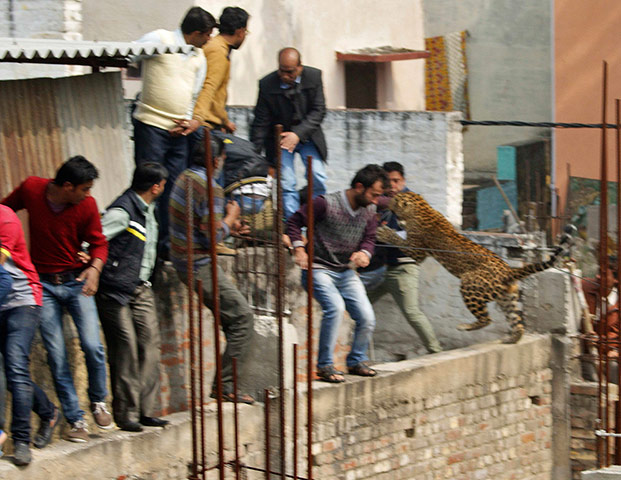 A leopard jumps at people on a building site in a residential area in Meerut, in the northern Indian state of Uttar Pradesh. Schools and shops were closed after seven people were injured by the leopard, local media reported. The leopard has not been captured. 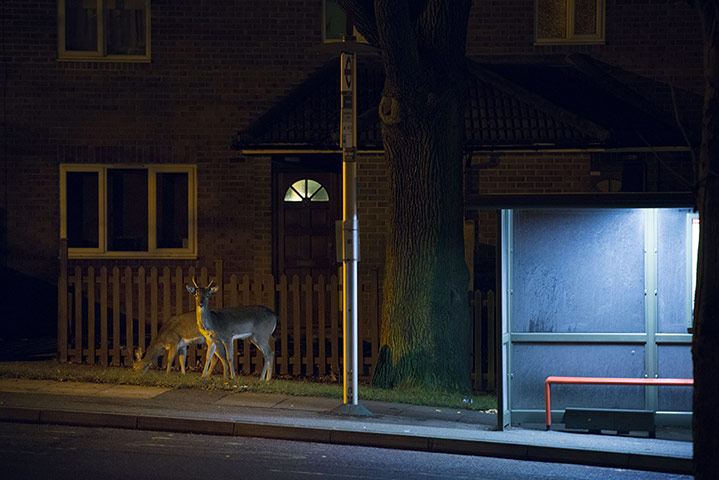 Wildlife photographer Sam Hobson’s latest project shows deer venturing into urban areas. ‘Wildlife photographers typically come from wild places full of wild animals. I grew up in London, so had a fairly different starting point, but learnt at a young age that if you look in the right places, wildlife is all around us – even in the city … I’ve shot several series on surprising urban species, from badgers to birds of prey, but when I heard about these large fallow deer wandering into the city to graze by night, I had to check it out for myself’. 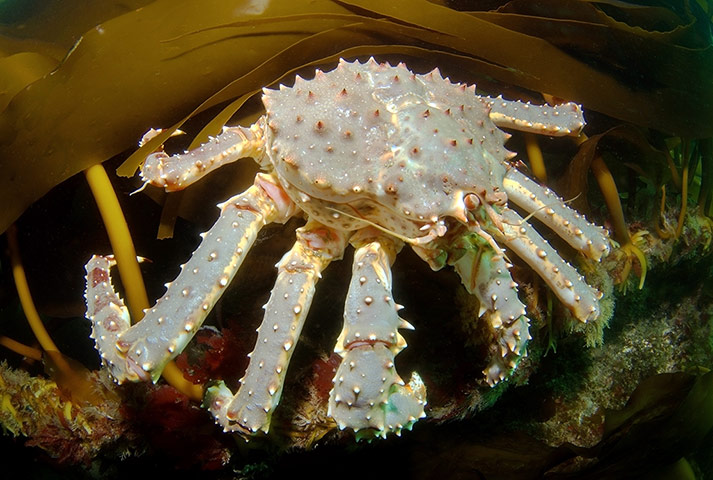 A red king crab seen in Barents Sea in Arctic Ocean, Russia. Soviet scientists introduced the species to the Russian Barents Sea near the border with Norway in 1960. They wanted to increase the yield from local fisheries. Since then, millions of crabs have spread west. 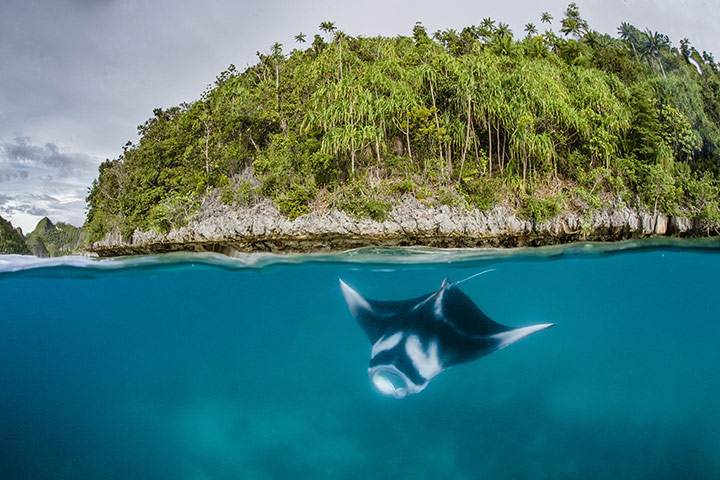 A manta ray in the waters of Raja Ampat in eastern Indonesia’s remote Papua province. Indonesia this month became home to the world’s biggest manta ray sanctuary covering millions of square kilometres, as it seeks to protect the huge winged fish and draw more tourists to the sprawling archipelago. According to media reports, the Indonesian government is tightening the regulations for the fishing of sharks and manta rays, which are now included in the list of Appendix II of the Convention on International Trade in Endangered Species (Cites). 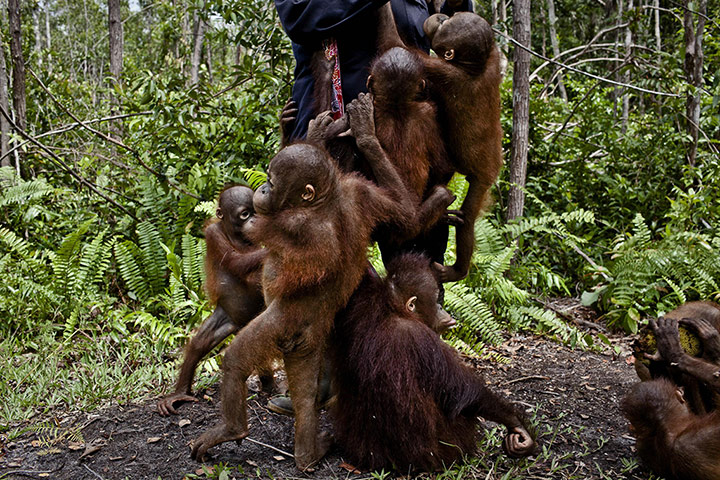 Baby orangutans at the Orangutan Foundation International Care Centre in Pangkalan Bun, Central Kalimantan. Greenpeace has called on the multinational Procter & Gamble to commit to an immediate ‘no-deforestation’ policy after linking the company to palm oil suppliers in Indonesia that have allegedly cleared habitat of the endangered species. 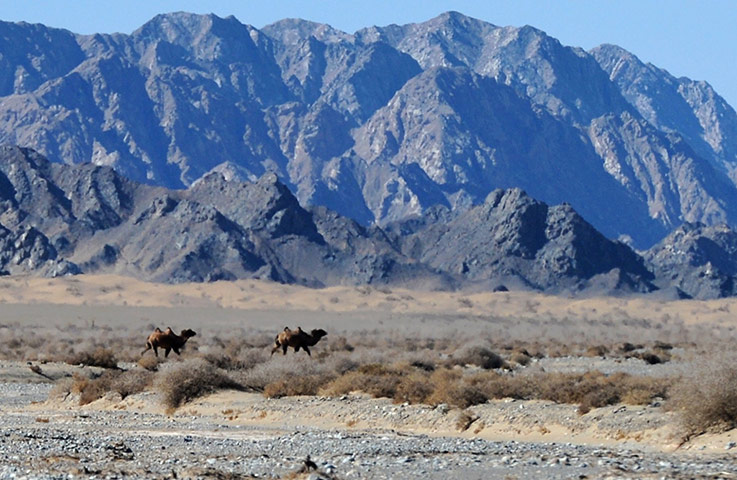 Wild Bactrian camels (Camelus ferus) on the move in north-west China’s Gansu province. Bactrian camels have two humps rather than the single hump of their Arabian relatives, and live in central and east Asia’s rocky deserts. They are listed by the IUCN as a critically endangered species, with less than 1,000 individuals estimated to remain. 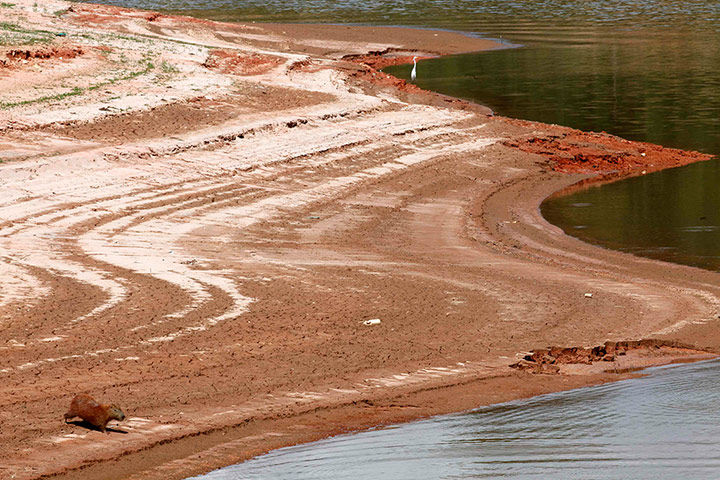 A capybara on the banks of Jaguari dam during a drought in Braganca Paulista, Brazil. 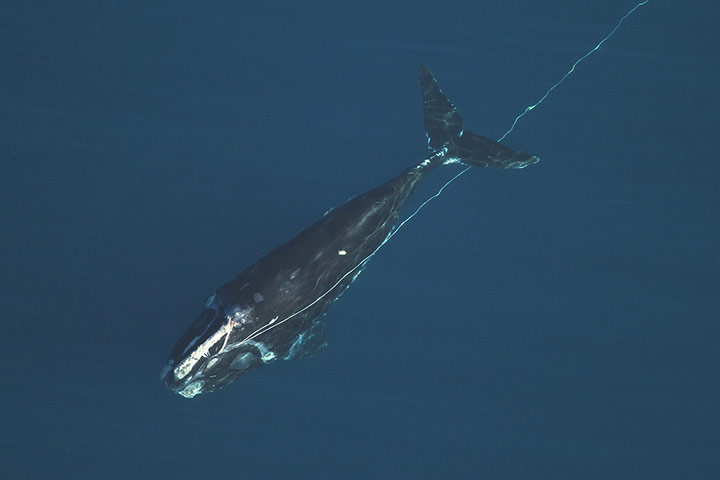 A four-year-old male right whale became entangled in fishing rope off the coast of Georgia, US, this week. The whale was spotted by an aerial survey team flying 40 miles east of Jacksonville, Florida, dragging more than 90 metres of heavy fishing rope. While most of the rope was successfully removed by scientists, some had to be left inside the whale’s mouth. Only around 450 North Atlantic right whales remain in the wild, and each winter they migrate to the warmer waters off Georgia and Florida to give birth to their calves. Entanglement in commercial fishing gear is considered one of the leading causes of death and injury and greatest threats to their survival. 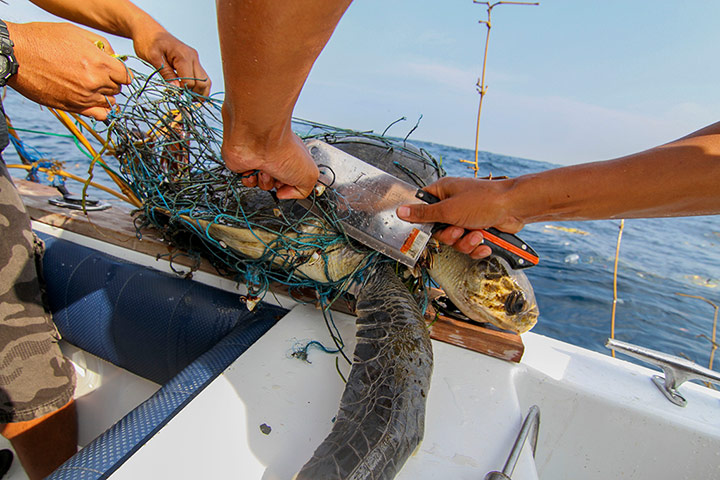 Balinese divers free a sea turtle found tangled in an old discarded net in Bali, Indonesia. Indonesia, home to important migration routes at the crossroads of the Pacific and Indian Oceans, is home to six out of seven of the world’s turtle species. 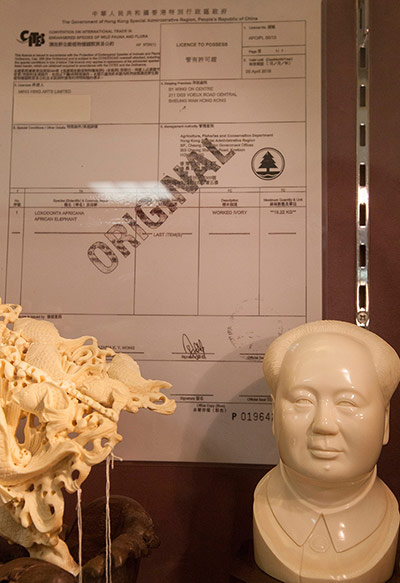 An ivory bust of Chinese revolutionary leader Mao Zedong and a Cites licence issued by the Hong Kong government are seen at the ivory sales counter in the Wing On department store. Many stores in Hong Kong that sell elephant ivory are currently offering steep discounts to consumers as a way to lock in quick profits after many years of steep price rises, but also out of a desire to offload as much stock as possible before an anticipated sales ban. According to scientists, the current elephant poaching crisis in Africa is the worst since the 1980s and is resulting in the killing of thousands of elephants every year for the ivory trade. 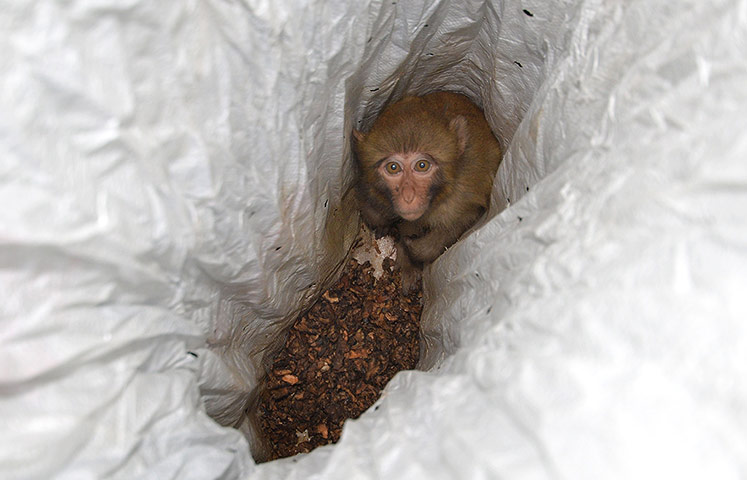 A rescued macaque in the Congtai Park zoo in Handan in Hebei province, China. Police this week saved 18 macaques while checking a bus. The animals were most likely destined to be sold as part of the illegal wildlife trade. 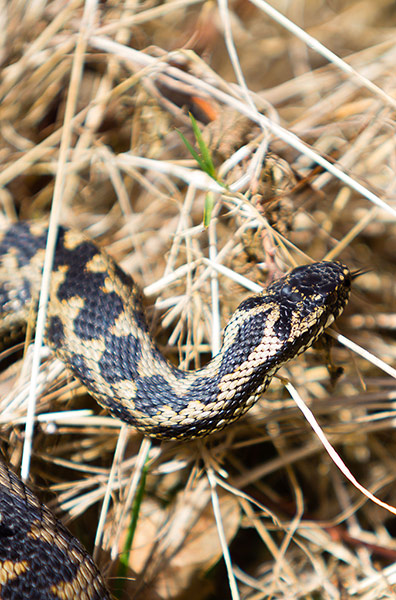 An adder (Vipera berus) at Pulborough Brooks, Sussex, was among the species enjoying spring-like weather at RSPB nature reserves in England this week. 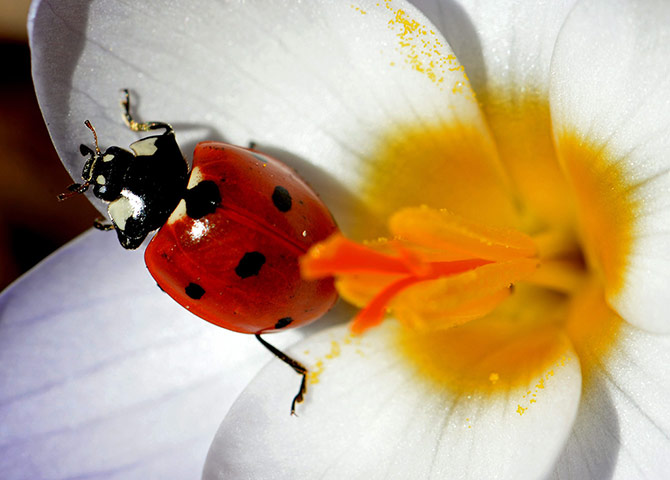 A ladybird, one of the first insects to appear in the spring, makes an early appearance, resting on the leaves of a crocus in the town of Kleinmachnow, Brandenburg state, northern Germany. There are more than 5,000 species of ladybird worldwide.