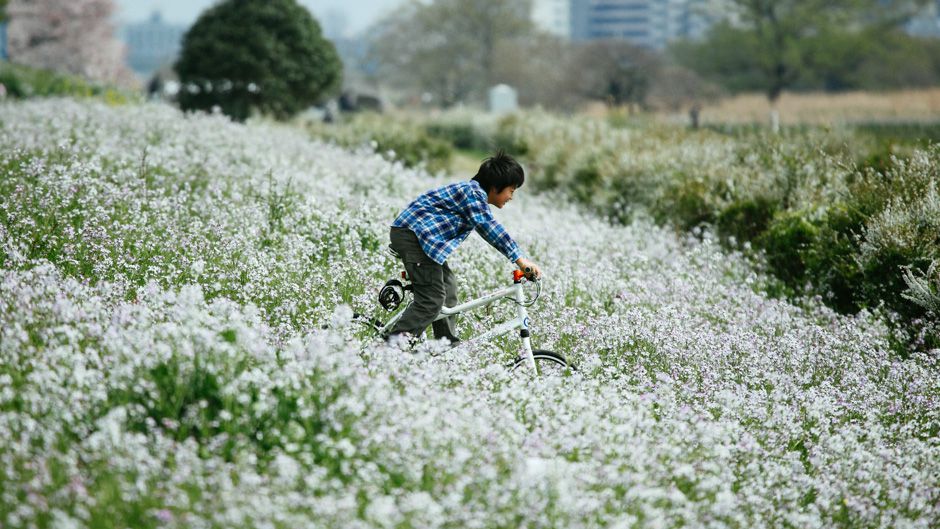 Earth is finite and the quality of resources means everything. Peak oil means peak food and, very possibly, the peak of human advancement. It is thus disconcerting to realize that the world’s dominant agricultural system is so deeply dependent upon petroleum-based fertilizers and pesticides, as well as being highly mechanized and hinged upon fuel-guzzling freight systems.

The end of the global petroleum-based civilization will obviously have significant ramifications for Japan. While that daunting challenge looms, Japan has to deal with the consequences of the 11 March 2011 (3-11) nightmare — a major natural disaster, the worst nuclear accident in the history of mankind — including radioactive contamination, long-term health hazards, and a nuclear power decommissioning task that will take decades to resolve.

This predicament was brought upon the country by a mindless belief in the “myth of safety” that surrounds the nuclear industry. The nuclear energy safety myth was pushed onto citizens and was eventually believed even by those who spoke of it. Local areas were foolish enough to be swayed by the large amounts of money injected when the nuclear stations were sited there.

Following the disaster, there has been much discussion about the country’s energy crisis. However, it is not as simple as choosing between nuclear energy and fossil fuels. The basic point is that the cheap and easy oil-based civilization is coming to an end, and the nuclear energy crisis is superimposed upon this. Most Japanese may be unaware, but global oil production plateaued around 2005 and that had a negative impact on the global economy. The actual decline in production is likely to become discernible within a few years. Consequently, it is inevitable that the global economy will also begin to decline and shrink.

However, it is important to recognize that there are divergent views on the peaking of oil production. Some point out that there are still unconventional energy sources to tap, such as Canada’s oil sands.  Yet, to obtain oil from such sources requires extremely energy-intensive and polluting production systems.

Shale gas, which is being hyped recently, is now increasingly extracted with a new horizontal boring technology that injects water and chemicals to fracture underground shale strata and produce natural gas (known as hydraulic fracturing or “fracking”). This incurs great energy costs and involves serious environmental destruction, the consequences of which are still not entirely known but are likely to include damage to subsoil and water table contamination.

Since 3-11, there has been much discussion supporting or opposing nuclear energy in Japan and globally. However, there is a crucial issue that is being overlooked. There is a limit to uranium resources. When this is mentioned, some people will assert that there is hope in the nuclear fuel cycle for reprocessing,  but the effectiveness of technology is still in dispute. There is no end to optimistic talk of uranium from seawater, but people have forgotten that tremendous energy is needed for this condensation.

Energy should be evaluated by Energy Profit Ratio

Flowing petroleum, the icon of conventional energy, has a very high energy profit ratio (EPR) of 100. This declines with production, but oil fields in US still have an EPR of 10-20 even today.

The process of extracting the bitumen (thick crude oil) found in Canada’s oil sands has an even lower EPR of just 1.5. The resultant destruction of nature and the landscape is disastrous. If this nature and landscape is restored (what the industry calls “reclamation” and is supposedly required by law) it is sure to have an EPR of 1.0 or less, resulting in a net loss of energy.

Other unconventional energy sources such as biofuel, corn ethanol, as well as the shale gas mentioned earlier, also have very low EPRs compared to conventional fossil fuels. We know that corn ethanol results in a net loss of energy, but it is currently being sustained with government subsidies. To support our civilization in general at current levels, an EPR of at least 10 is needed.

And what about everyone’s favorite, solar energy? Many experts speak of its volume being 10,000 times what humans use in a year. However, its quality is poor because energy density is low and it can’t be generated at night or when it’s cloudy. Wind energy also has tremendous volume, but its instability is a problem. To put it simply, there’s a need to understand that natural energy has low EPR, is intermittent, and is unsteady.

Finally, the primary energy ratio of nuclear power is 10 percent or lower in Japan, and just 6 percent worldwide. In other words, we would need 10 times more than the current level of nuclear power to cover Japan’s future energy needs. Furthermore, we must understand the crucial fact that we rely on petroleum infrastructure for all processes of uranium mines, power plants, and waste disposal.

All national models for energy provision should reflect a country’s unique context and natural endowment. Japan’s coastline is the sixth longest in the world. It is an archipelago that is about 70% mountainous. Its climatic zone is rainy and typical of the Asian monsoon region. This is important to the understanding of the geographical features and natural environment of Japan.

It is therefore wrong to look to the petroleum-dependent, large-scale agricultural model that has developed in North America as a model for Japan. Rather we must aim for a decentralized society that doesn’t rely heavily on petroleum. We need to reconstruct our food and energy foundations. We must reduce waste and aim to become a low-energy society that grows and consumes food locally and values social ties. As an example, we must stop relying on the upper levels of the food chain. This means we should avoid eating beef from cows raised on imported feed, and eat things like sardines, rather than the cultured tuna that would otherwise consume those sardines.

Food security/sustainability is the most pressing policy issue for post 3-11 Japan. Localizing the food system, in the end, will become a global warming and resource depletion countermeasure. Building a decentralized society that coexists with nature could also help to rebuild local industries because such a model may potentially be less vulnerable in a post-peak oil world.

More extensive use of renewable energy may not be able to support our current mega systems of centralized urbanization. Rather decentralization may offer advantages and we may see the formation of new communities that serve as momentum to reclaim interpersonal bonds, thereby boosting resilience.

In the post-peak oil world, we will not be able to sustain the wasteful economic and GDP growth focused model of the past. In this world of finite resources, the infinite growth model is no longer feasible.

Therefore, in preparation for the demise of oil-dependent civilization, I have listed a Plan B roadmap envisioned for post 3-11 Japan. This is centered on the “mottainai” (what a waste) concept.

1) Wean society from dependence on petroleum and nuclear power; evaluate renewable energy sources through the use of EPR and focus on their feasibility.
2) Recognize that the planet has limits; shift to a regionally dispersed society that coexists with nature and implements Rittai agriculture (three-dimensional agriculture) which combines growing crops, fruit and cattle in a sustainable manner.
3) Shift from a GDP focused model to one centred on a “Genuine Progress Indicator” (GPI) — a more holistic measure of the welfare of a nation that takes into account natural, social, and human-made capital.
4) Build a low-energy society where it is more beneficial to have fewer children and where the elderly can work.
5) Peak oil means fuel crisis; shift from a car-reliant society and focus on trains, public transport, and use of bicycles.
6) Start with reduce, the first R of a re-circulating society: Reduce, Reuse, and Recycle.
7) Re-think the priority on efficiency and shift from a concentrated population to a regionally dispersed population; coexist with nature; create jobs through local production and local consumption.
8) Build a society that emphasizes spirituality, mottainai, moderation, and interpersonal bonds.

To do this, there is a need to start by revising economic indicators. Instead of GDP, the use of a GPI would be a more accurate indicator, leading to a society where people benefit more equally and in a truly sustainable manner.

Yoshinori Ishii is Professor Emeritus at the University of Tokyo, President of the “Mottainai Society” and a Doctor of Engineering. He graduated from the University of Tokyo Faculty of Science, Department of Physics in 1955. He worked for Teikoku Oil Co., Ltd., Japan Petroleum Development Corporation, etc. for 16 years and at the University of Tokyo’s Faculty of Engineering he was Assistant Professor, and Professor in the Department of Resource Development Engineering for 23 years. Retired in 1993, he became Professor Emeritus. He was Deputy Director General of the National Institute of Environmental Studies and then Director General from 1996-1998 and later became Special Councilor and Professor at Toyama University of International Studies. He established the “Mottainai Society” in 2006 and is currently President. In fall 2007, he was awarded the Order of the Sacred Treasure, Gold Rays with Neck Ribbon. His publications include “Peak Oil Has Come — ‘Japan’s Plan B’ to Avoid Collapse” published in 2007 by Nikkan Kogyo Shinbunsha.